A slate of bills before the Kentucky General Assembly would prepare criminals to return to society, address the drug crisis, protect first responders, and abolish the death penalty.

1. Eliminate automatic denials that felons have faced when trying to secure an occupational license after release. Instead, felons can plead their case to the licensing entity. If they are still denied a trade license, the legislation creates an appeals process to have that decision reconsidered.

2. Provide prisoners more paid job opportunities with private industries both within prison and via work-release. This would enable felons to learn new skills and earn money that they can put towards the costs of housing them in jail as well as to outstanding child support debts and victim restitution fees.

3. And create a pilot program to treat inmates with substance use disorders.

Since 95 percent of felons will return to society at some point, Westerfield says it’s critical to prepare them for life on the outside. And doing so, he contends, will reduce recidivism.

“We need to do the best we can to make sure that we send them back not as better criminals but as better citizens,” Westerfield says. “The more we can do to help make sure they have an opportunity for success once they get out the door, the fewer we’re going to see come back.”

The legislation did face some opposition in a committee hearing last week. Sen. Sen. Danny Carroll (R-Paducah), a former law enforcement officer, was among those expressing concern that the reforms might be too soft on criminals. But Westerfield notes the bill has the support of a wide range of groups, including the Kentucky Chamber of Commerce, the American Civil Liberties Union, the Fraternal Order of Police, and the Kentucky Coalition Against Domestic Violence.

Westerfield plans to bring the bill to a vote in the Senate Judiciary Committee Thursday morning. He says the full Senate could vote on the bill on Friday.

Bail and Felony Threshold Provisions
Not all the issues reviewed by the governor’s Criminal Justice Policy Assessment Council made it into the final bill, though.

Sen. McGarvey, who served on the panel with Westerfield and praises the bipartisan work on SB 120, says they dropped a provision to eliminate money bail. He says those who are kept in jail until their trial should be decided by the danger they pose to the community and not by their financial ability to post bail.

The panel declined to raise the monetary threshold for a felony theft offense from the current $500, which McGarvey says is very low. He says they had hoped to increase it to $2,000. Doing so would have made more thefts a misdemeanor crime rather than a felony.

Rep. Harris says that idea worried county officials who would’ve have faced higher costs to jail more misdemeanor offenders without any additional funding to do so. He says the state pays to house felony offenders.

Providing More Opportunities for Expungement
Several bills before the legislature would offer more felons who have completed their punishments the chance to have their criminal records expunged. A separate measure calls for the restoration of voting rights for certain felons.

Last year lawmakers approved an expungement process for certain non-violent offenders who committed low-level felonies. Westerfield says that gave 70 percent of Class D felons in Kentucky the opportunity to eventually have their convictions expunged. Having a criminal conviction removed from an individual’s record can make it easier for them to get a job.

“I have a problem with expungement in principle,” says Fischer. “Private employers… deserve as much information about their potential employees as they can get to make an informed decision.”

Rep. Harris contends that those who committed a felony offense, especially at a young age, and have had a clean record for years since then, should be able to remove the “scarlet letter” of a felony crime from their backgrounds.

On voting rights restoration, the House passed such legislation in previous sessions when it was under Democratic control but those measures failed in the Republican controlled Senate. This year Sen. Neal has proposed a constitutional amendment to provide the restoration of voting rights for certain felons.

Republicans Westerfield and Harris say their views on the issue depend on which felons would be eligible for restoration. Democrat McGarvey says voting privileges should be returned to felons not convicted of murder, rape, or election fraud.

“I think one of the most basic ways you can get people integrated back into society is to make them feel they have a stake,” McGarvey says. “Restoration of voting rights is absolutely the next linear step in that. I think it’s something we should do. I think we should make it automatic.”

Senate Bill 14 would make trafficking any amount of heroin or the synthetic opioid Fentanyl a Class C felony on the first offense. Westerfield says previous legislation tied the level of offense to the amount of drugs being sold. He says savvy traffickers simply learned how much they could sell without risking a tougher penalty. Given the numbers of people getting addicted to and dying from these drugs, Westerfield says lawmakers want to crack down on dealers.

“Everyone is universally agreed that commercial traffickers need to be lined up and shot,” Westerfield says, “and this is as close to that as we can get.”

House Bill 333, sponsored by Rep. Kim Moser (R-Taylor Mill), also proposes tougher penalties for dealers and includes a provision to require doctors to prescribe only a three-day supply of narcotic pain medications. Harris has his own bill to limit prescription painkillers. His House Bill 193 provides for a seven-day supply of narcotics for patients. Both measures offer exceptions for situations like cancer treatment or palliative care.

Harris says jail sentences alone won’t solve the drug crises. He says the goal of limiting prescriptions is to stop addiction to narcotics before it starts.

“We’ve been fighting this war on drugs for 30 years now and we’ve got more people incarcerated than we ever have,” Harris says. “We’ve got to get to the root problem of what is causing this.”

Several bills also deal with legalizing medicinal or recreational marijuana, but the lawmakers see little momentum for those measures in this session.

Blue Lives Matter
House Bill 14 would make offenses committed against police officers or other first responders a hate crime. The measure passed the House last week after significant floor debate as well as protests from members of Black Lives Matter watching the proceedings from the gallery.

Fischer says the so-called Blue Lives Matter bill does not levy tougher penalties against those convicted of these offenses. He says it simply creates a notation in the criminal record that there was an intent to target these individuals for harm. Fischer says that note can later inform a judge considering probation, or a parole officer during a parole hearing.

McGarvey agrees with Harris. He says the hate crime designation should be reserved for historically oppressed groups of people.

“We have hate crimes for who you are, not what you do,” McGarvey says. “If we start giving hate crimes out for occupations, no matter how noble they are, where does that stop?”

Westerfield says he has no problem with HB 14. He says he expects the Senate Judiciary Committee to vote on it next week.

McGarvey says he worries that the death penalty can be misapplied and that there’s no data that proves capital punishment deters crime. Westerfield says he has mixed emotions about the issue and leans toward keeping the death penalty for now.

Fischer says concerns about the costs associated with executions and the risks that an innocent person could be put to death are valid. But he also says the state should have the option for applying the death penalty for aggravated circumstances.

“It’s an idea whose time is ready for debate, whether the support for abolishing the death penalty is there remains to be seen,” Fischer says. “This depends on what the people want in this state.” 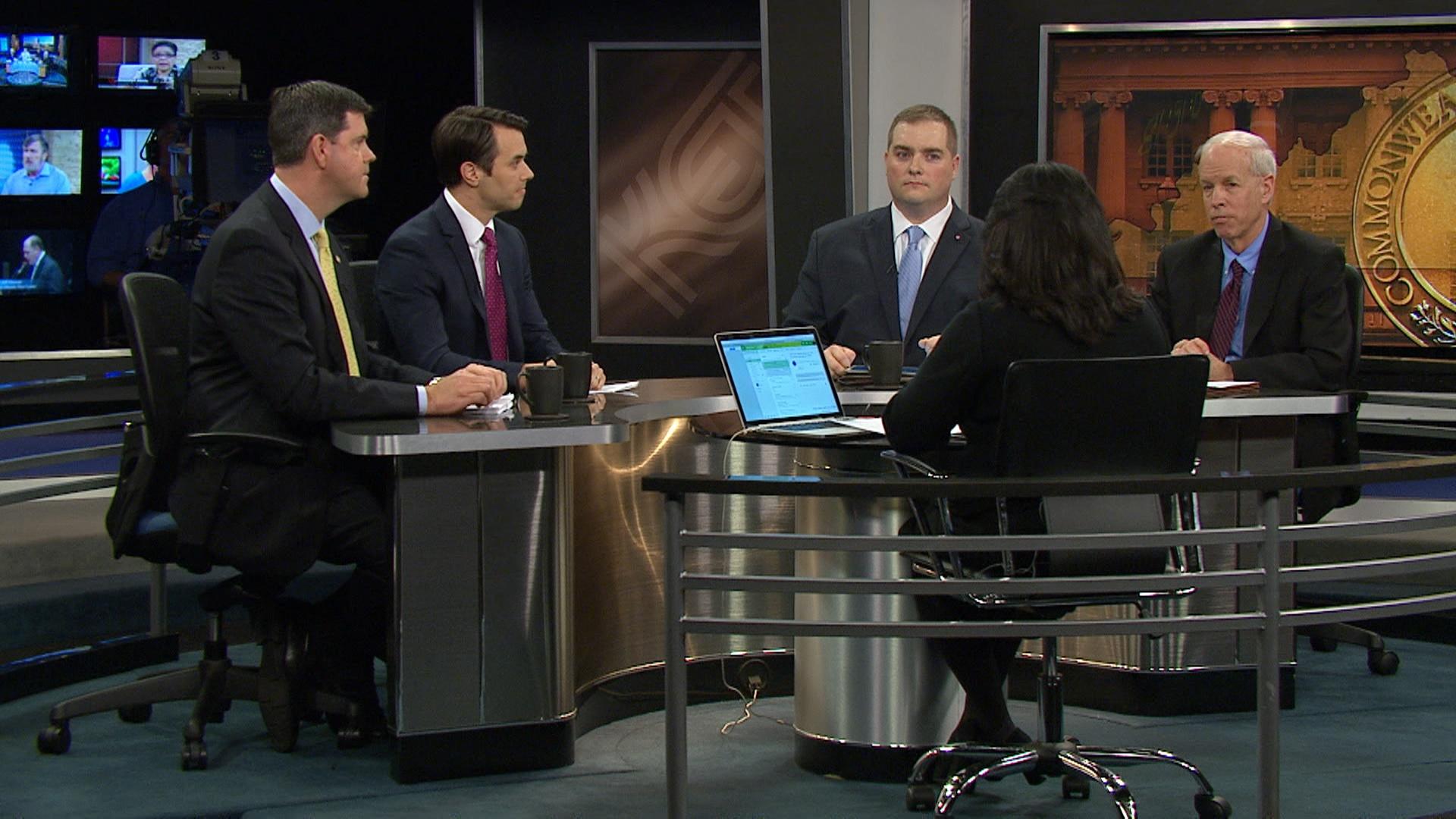