Renee Shaw and her guests discuss the Affordable Care Act and the American Health Care Act. Guests: Dr. Barbara Casper, an internist and professor of medicine at the University of Louisville; Dr. Cameron Schaeffer, a pediatric urologist; Dustin Pugel, researcher at the Kentucky Center for Economic Policy; and Jim Waters, president of the Bluegrass Institute for Public Policy Solutions.
Season 24 Episode 21 Length 56:33 Premiere: 06/12/17

GOP leaders in the U.S. Senate want to pass a health care bill by the end of June. But so far, few specific details have emerged on just how the Senate may change the version of the American Health Care Act passed by the U.S. House of Representatives in May.

With just a handful of legislative days left on this month’s calendar, that leaves little time for a full and open debate on the provisions of the Senate’s proposal.

KET’s Kentucky Tonight explored the health care policy proposals and some of the challenges in the current system. The guests were Dr. Barbara Casper, an internist and professor of medicine at the University of Louisville; Dustin Pugel, research and policy associate at the Kentucky Center for Economic Policy; Dr. Cameron Schaeffer, a pediatric urologist with offices in Lexington and Louisville; and Jim Waters, president and CEO of the Bluegrass Institute for Public Policy Solutions.

Provisions of the AHCA
A key goal of the GOP’s American Health Care Act (AHCA) is to repeal and replace the Patient Protection and Affordable Care Act (ACA or Obamacare) that President Barack Obama signed into law in 2010. The House version of the AHCA includes provisions to restructure Medicaid funding and roll back the expansion of Medicaid coverage allowed in the ACA.

The new bill also replaces Obamacare’s income-based tax credits and subsidies with age-based credits, eliminates the penalty on individuals who don’t get insurance, funds high-risk pools for people with expensive pre-existing conditions, and makes it easier for insurance companies to charge more to older and sicker individuals.

The Congressional Budget Office score of the AHCA, which came out after the House vote, said the legislation would reduce the federal deficit by $119 billion over the next decade, but also leave 23 million more Americans without insurance. Impacts to premium payments will depend largely on the age of the individual and the state in which they reside: Younger people could see little change or even a decrease in their monthly premiums, while older Americans could experience a huge jump in their insurance costs.

Critiquing the Proposed Reforms
Even without any details about what the Senate may tweak in the AHCA, the legislation has managed to anger those on the left and the right.

“At its core this bill is about massive tax cuts, mainly for the wealthy, at the expense of people on Medicaid,” says Dustin Pugel of the Kentucky Center for Economic Policy. “I think that there are ways that we can and should improve on the ACA, but to pass AHCA, to radically change the way we pay for traditional Medicaid [and] to completely end coverage for people on the expansion would be a catastrophe.”

In addition to potentially hurting the 470,000 Kentuckians who acquired coverage through the ACA’s Medicaid expansion, Pugel says lower-income individuals buying insurance through the exchange could also be affected. He contends the age-based structure for the subsidies will be much less generous, and that could leave some people unable to afford any coverage at all.

Jim Waters of the Bluegrass Institute for Public Policy Solutions says one positive aspect of the AHCA is that it gives states more flexibility to manage health care dollars. Otherwise, he calls the AHCA a “repeal in name only” since it keeps many Obamacare provisions, including the subsidies.

“The problem is Congress basically is going to wash its hands of the mess that’s been made,” says Waters. “We think this bill says, go ahead states, do your thing and we’ll keep the subsidies flowing.”

Even doctors are split on the relative benefits of Obamacare and its proposed replacement.

“I’ve had a problem with Obamacare not only as a doctor but as an American,” says Dr. Cameron Schaeffer. “This country was founded on principles of individualism, liberty, freedom … and Obamacare in my mind was the last nail of deconstructing our constitution.”

Schaeffer acknowledges that more people now have insurance, but he contends the improved health outcomes and economic gains promised under the ACA have not materialized. Plus he says Obamacare and the Medicaid expansion have saddled the country and future generations with an “immoral” amount of debt.

Among the low-income patients she sees, Dr. Barbara Casper says the ACA made dramatic improvements for those who were able to finally get insurance coverage. She says they are now receiving regular check-ups and preventive care rather than simply visiting an emergency room when a crisis strikes. Casper fears the AHCA would result in many of her patients losing health insurance they’re now used to having.

“Government is best when we protect the most vulnerable among us,” Casper says.” “People don’t get sick on purpose, it happens to them, it can be a catastrophic illness and to penalize those folks and not allow a safety net for them to actually get the care they need without going bankrupt is really unconscionable.”

The Fate of Medicaid
Another problem with Obamacare, says Waters, is that he says it took a sledgehammer to existing problems in the health care system, including how to deal with uninsured populations. For example, expanding Medicaid to those at 138 percent of the federal poverty level (that equates to an annual income of about $16,000 for an individual) did give more people coverage. But Waters contends they still can’t get care because of a long-standing issue of too few doctors willing to take Medicaid patients.

“My question is, if we already had an issue with access problem before Obamacare, which we did with Medicaid, how is adding 400,000 new enrollees to that program going to really address that problem?” Waters says.

Casper says it makes no sense to throw people off Medicaid if they only go back to seeking care at emergency rooms. She says that simply shifts the cost burden to those facilities that must provide uncompensated care, and it’s a poor way for low-income people to manage chronic health conditions. Schaeffer says he’s concerned about fraud in the Medicaid system, and that Kentucky can’t afford its Medicaid expansion given the unfunded liabilities in the state’s public pension plans.

The AHCA proposes converting Medicaid funds to a block grant in which the federal government would provide states a fixed amount of money for their Medicaid programs regardless of how many enrollees they have. Waters says that would give states more flexibility to tailor their Medicaid programs to the specific health needs of their citizens. But Pugel fears it will result in Kentuckians losing Medicaid coverage, and also result in the end of thousands of health care jobs that the expansion has helped to create.

Even before Congress proposed Medicaid changes in the AHCA, Gov. Matt Bevin applied to federal regulators to overhaul Kentucky’s program by adding work requirements and small premiums and co-pays for enrollees. Casper says many of the working poor on Medicaid are already juggling multiple jobs. Plus she says many of them also have no checking accounts or credit cards, which would make keeping up with monthly premiums difficult. Finally she says the administrative costs of collecting those payments would far exceed what the state would collect.

Containing Costs
The Kentucky Tonight panel members agree on one thing: that more transparency in the health care system could promote lower costs. They say doctors and health care facilities should publicize what they charge so that consumers can make more informed choices about their care. Schaeffer adds that patients would also have more incentive to pressure the system to lower health care costs if they had to pay more out of pocket for those services.

Cost transparency must also be coupled with more data about the quality of care being provided, according to the panel. Casper contends that one flaw in the current system is that it’s too focused on the services rendered or the procedures performed.

“The problem is that insurance pays for volume and not quality,” says Casper. “That’s something that needs to be changed in the system to decrease costs.”

Another cost driver, according to Waters and Schaeffer, is forcing people, especially younger enrollees, to purchase more coverage than they may need. They contend the theory of spreading costs among younger, healthier people and older, sicker people doesn’t work well in reality.

“Risk sharing makes sense if the policies sold to young people can be afforded,” says Schaeffer. “But when you mandate coverage for things that people don’t need, that raises the price and [it] becomes untenable for people.”

Waters adds that the overall system needs to be more innovative to allow people to obtain coverage that is more individualized and portable. He also argues that insurance policies have evolved away from the original intent, which was covering catastrophic events that people wouldn’t be able to afford, to the current system of covering a broad range of preventive and health maintenance services. 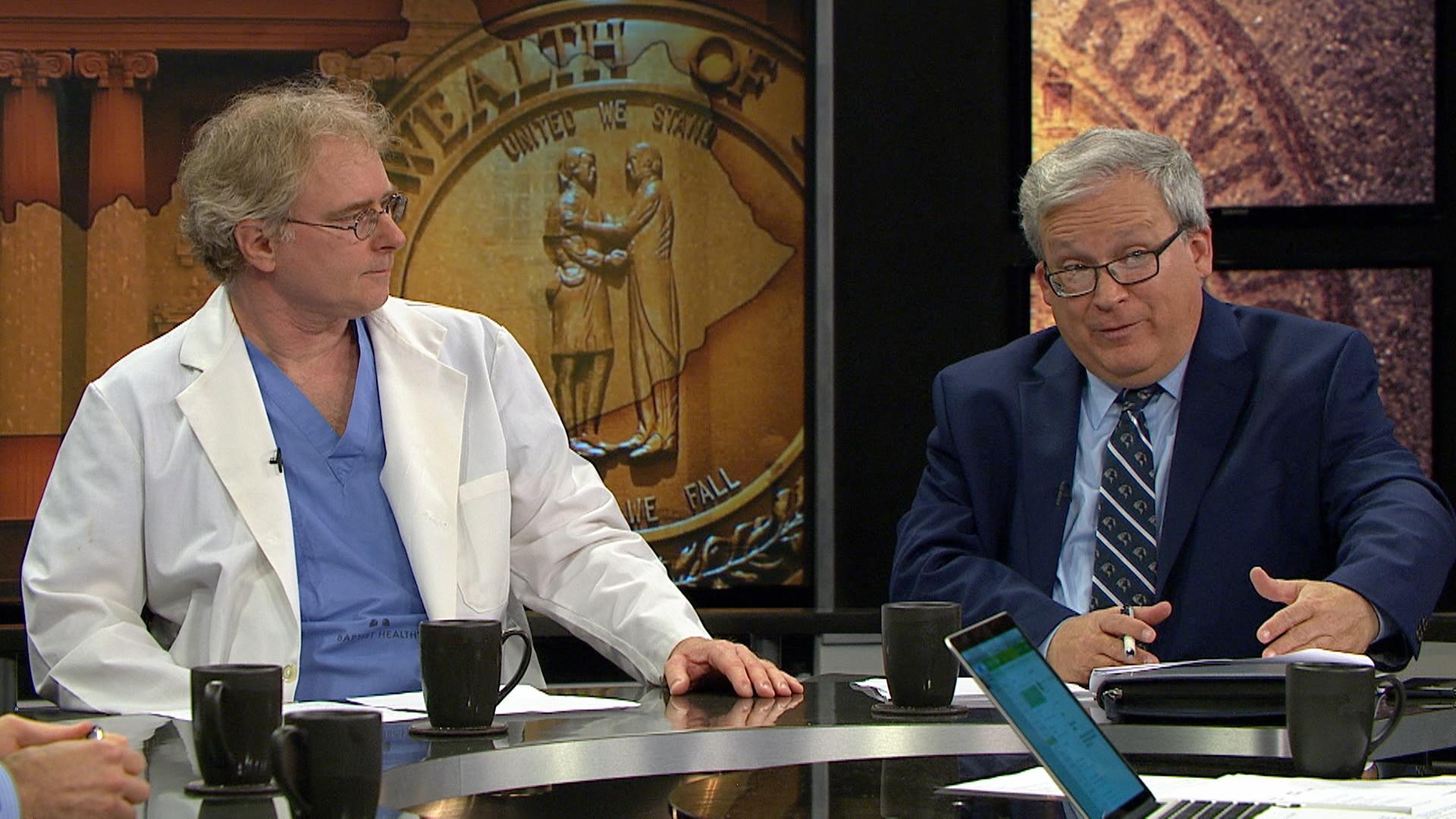