For a decade, patrons at many Kentucky horse racing tracks have been able to bet on live races as well as previously run contests known as historical horse races via games that look like electronic slot machines. There are now some 3,500 such games around the commonwealth at facilities that have been dubbed “racinos.”

Racetrack owners raked in billions in revenues from these historical racing machines even though it was uncertain whether the games were legal in Kentucky. The only forms of gambling allowed under the state constitution are the Kentucky Lottery, charitable gaming like church bingo events, and pari-mutuel wagering on horse races.

The industry and the Kentucky Racing Commission argue the games are just another form of pari-mutuel wagering.

“It is really an ingenious application of technology to races that have been run over the years,” says Bill Lear, attorney for the Keeneland Association. “If you win, you win based on what other wagerers have bet and put in pools from other races. If you lose, then the money goes to other persons, it doesn’t go to the house.”

But after a years-long legal battle over the issue, the Kentucky Supreme Court unanimously ruled in September that one of the three types of historical horse racing games used in the state does not meet the criteria for pari-mutuel wagering.

“You’re not betting in a pari-mutuel pool and you’re not all betting on a single event,” says Martin Cothran, senior policy analyst and spokesperson for the Family Foundation of Kentucky, which challenged the games in court. “You have to have those elements.”

In its decision, the court also said any changes to the state’s definition of pari-mutuel wagering to allow such games would have to “be made by the people of this commonwealth through their duly-elected legislators.”

“They ended by saying, ‘Legislature it’s up to you to fix this if it’s going to be fixed,’” says Lear. “They sent an engraved invitation to the members of the General Assembly on the part of an industry that is really critical to the state of Kentucky.”

That language paved the way for legislation now before the Kentucky General Assembly that would explicitly include historical horse racing games as part of pari-mutuel wagering.

“The Supreme Court invited us to make a definition of pari-mutuel wagering and that’s exactly what my bill does,” says Sen. John Schickel (R-Union), the sponsor of Senate Bill 120. “The last 10 years have shown that historical racing has been good for Kentucky and has been good for our signature industry.”

‘Doing CPR’ on the Horse Industry

Given the new uncertainty about the future of the games, Keeneland and Red Mile racetracks temporarily closed the historical horse racing facility they jointly operate in Lexington. Lear says that resulted in the layoffs of 225 people. Other racinos in the state have continued to operate for now since they feature machines that were not deemed illegal by the Supreme Court ruling.

But industry officials fear if the court decision stands and is determined to apply to any historical racing machines, all racinos around the state would be forced to shutter, leading to more job losses.

An even bigger concern is the overall impact on the state’s Thoroughbred industry. Proceeds from the state’s historic racing games are used to supplement the purses paid to the winners of live horse races.

“The lifeblood of horse racing is purses, and that’s where the moneys from these machines go is into purses,” says Lear.

Schickel, who is chair of the Senate Licensing and Occupations Committee, says that without the revenues gleaned from historical racing games, the state’s entire Thoroughbred industry, from horse farms and tracks, to veterinarians, hay farmers, grooms, and hot walkers, is at risk.

“Racing is on life support right now. We’re doing CPR,” says Schickel. “All around the country, Thoroughbred racing is shrinking. We’re... probably the only state where it’s actually expanding, and I believe and the industry believes that is directly due to historical racing.”

But critics of SB 120 contend it may not protect the state’s horse industry.

“There’s actually nothing in this bill that guarantees anything for live horse racing at all,” says Sen. Whitney Westerfield (R-Crofton). “What it does guarantee is a stream of revenue for the... places where these illegal machines have been installed.”

The state racing commission only authorized corporations like Keeneland and Churchill Downs to operate historical racing facilities. That makes SB 120 a “millionaire stimulus bill,” according to Cothran. Instead of saving live racing, he sees historical racing as a threat to Kentucky’s Thoroughbred industry.

“This kind of gambling is far more efficient, far quicker, far more lucrative for the people running it than horse racing is, so where are these tracks going to gravitate to?” says Cothran. “If this bill passes, slot machines are going to be the state’s signature industry.”

Cothran and Westerfield have several other issues with Schickel’s proposal. They argue that historical racing games can only be legalized by amending the state constitution and not through simple legislation. Beyond that, Westerfield says the Senate traditionally doesn’t take up legislation that pertains to issues currently before the courts.

Schickel and Lear respond that resolving the issue does not require a constitutional amendment, which would have to go to a public vote. And Schickel says that he has seen instances where the Senate does act on issues involved in litigation.

An Opportunity for More Tax Revenues

The Senate passed SB 120 on Tuesday on a 22 to 15 vote. As the measure heads to the House of Representatives, some Democratic lawmakers and a coalition of organizations including the Kentucky Center for Economic Policy, the Kentucky Education Association, and the NAACP Owensboro are calling on lawmakers to increase the tax on historical racing revenues.

“The tax rate on these slot machines is far lower than you see in other states and lower than we tax other gambling in Kentucky,” says Jason Bailey, executive director of the Kentucky Center for Economic Policy.

Kentucky taxes historical racing games at 8 percent, according to Bailey. He says neighboring states tax revenues from electronic gaming devices at rates ranging from 33 to 53 percent.

“If we just taxed these slot machines similar to what other states do nearby, we’re talking about [revenues] in the range of $100 million,” says Bailey. “So it’s a significant amount of money. In fact, it’s the only politically feasible opportunity in the near future to generate that kind of money.”

The state racing commission reported that historical racing made $9.8 billion in revenues over the last 10 years, according to Westerfield. But he says racinos have paid only $59 million in taxes to the state’s General Fund.

“Enough is wagered in one day on these machines across the state to cover their obligation for the General Fund for the whole year,” says Westerfield.

Bailey says about three times more money is bet on historical racing that is played on the Kentucky Lottery, yet the lottery generates far more in annual revenues for state coffers than the racing games do.

Lear calls those economic arguments “red herrings” and says the effective tax rate on historical racing games in Kentucky is 31 cents on the dollar. He says that it is unfair to equate the taxes paid by these games to what traditional casinos pay. Lear also contends historical horse racing is still in its start-up phase, so now is not the time to tax it more.

“There’s $1 billion in facilities that have already been built; there’s $750 million that are on the books. Those have to be paid for,” says Lear. “If the industry matures, then that’s the time to talk about whether the tax rate ought to be adjusted.”

Westerfield and Cothran also question why the state should bail out an industry that they contend knowingly made a risky bet on these games before confirming they were legal. Westerfield says this is distracting lawmakers from more pressing issues, like funding education, workforce development, infrastructure, and social services.

Schickel agrees the state has many critical fiscal needs, but he says letting historical horse racing die is not the answer.

“Not addressing this will not help any of that,” says Schickel. “In fact it will hurt that because you’re going to hurt a part of our economy which is very, very important.”

Lear adds that the only way for the commonwealth to dig out of its financial hole and fund critical services is by creating more jobs, which will produce more tax revenues. He contends this legislation will help do that.

“This is a jobs bill in many ways,” says Lear. “It’s a bill to protect existing jobs not just in the [historical racing] facilities but in the horse industry, and to expand.”

Westerfield says that he’s all for new jobs and supporting local businesses, but he adds gaming is bad public policy because it preys on the misfortune of Kentuckians.

“The games are built for people to lose,” says Westerfield. “Those aren’t the kind of revenues that I want to generate for the state.”

While SB 120 passed the Senate, Cothran says he thinks the legislation may have a harder time clearing the House, where rural Republican lawmakers may be less likely to embrace this kind of gaming. 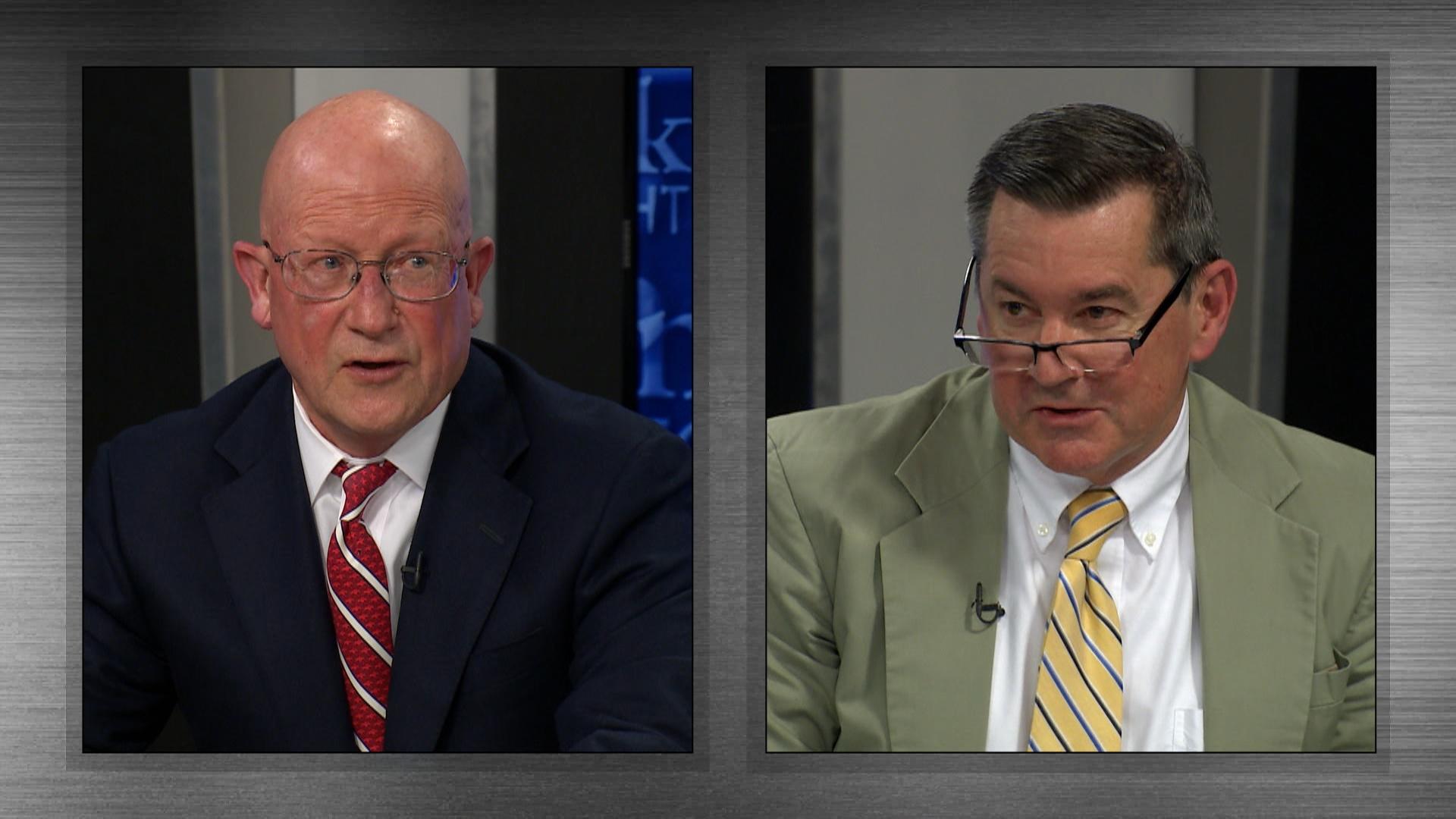