Lawmakers Discuss Crafting a State Budget and Other Bills

With just six working days left in the 2021 General Assembly session, it’s crunch time for state lawmakers who still need to pass budget and revenue bills as well as measures on education, infrastructure, and other issues.

The Budget Conference Committee is meeting this week to finalize a rare, one-year spending plan for the commonwealth. Given the fiscal uncertainties caused by the COVID-19 pandemic, legislators last year opted to pass a one-year budget instead of the usual two-year spending plan.

Now with new coronavirus cases on the decline, schools and businesses reopening, more Americans getting vaccinated, and new federal stimulus dollars on the way, the economic outlook is improving. Democratic Gov. Andy Beshear says lawmakers should seize this opportunity to invest in Kentucky’s future. But Republican legislative leaders aren’t ready cut loose the purse strings yet.

“He wants to spend one-time taxpayer dollars to get out of this pandemic,” says Senate Majority Floor Leader Damon Thayer (R-Georgetown). “We want to be conservative with taxpayer dollars and we want to get the economy opened back up.”

Thayer says the good news is that the national economy did not collapse so much last year that Kentucky lawmakers weren’t forced to make budget cuts this year. But even with a new round of stimulus dollars, which could bring an estimated $2.6 billion to the commonwealth, Thayer contends there is still too much uncertainty about the recovery to justify new spending. He says the state can’t continue to depend on federal relief to prop up Kentucky’s economy.

Republicans argue the best way to stimulate Kentucky’s economy is to pursue policies that let businesses fully reopen and encourage them to rehire workers. For example, the General Assembly is considering a measure that would give small businesses a tax deduction for Paycheck Protection Program loan expenses. Thayer says lawmakers should also put as much as $650 million into the state’s Budget Reserve Trust Fund, which already has a balance of about $500 million.

Instead of pouring more money into the state’s Rainy Day Fund, Democrats say the wiser approach is to jump-start the economy by boosting state spending.

“We ought to be prepared by sometime this year to break out of the gate real fast,” says Senate Minority Caucus Chair Reggie Thomas (D-Lexington). “We’ve got to do that by investing.”

Thomas says he supports proposals offered by Gov. Beshear to invest $220 million in relief for small businesses, and $50 million to complete the KentuckyWired broadband network.

“You can’t save your way to prosperity. That is not how you get ahead,” says Thomas. “I don’t think we should look at just doing a bare-bones budget. I think we would be cheating the state if we did that.”

House Minority Caucus Chair Derrick Graham of Frankfort calls for investment in all levels of education, from early childhood to college, which he argues is critical to economic success. He and Thomas also support pay raises for teachers, school staff, and all public-sector employees.

“I think the time is now for us, because of this pandemic, to invest in the human capital of this commonwealth because it is needed and the people are wanting it,” says Graham.

Many Republicans agree that broadband internet access must be expanded. House Majority Whip Chad McCoy of Bardstown says the pandemic has proven how critical universal high-speed service is to education, health care, and business. A bill that cleared the state House of Representatives with bipartisan support would allocate $250 million to complete the KentuckyWired network. McCoy says that money would be targeted to getting service to those homes, urban and rural, that have no internet service.

House Bill 320 is now before the Senate Appropriations and Revenue Committee. Thayer says he thinks lawmakers will devote some new money to broadband expansion, but he thinks it will be closer to $100 million.

As for education spending, Thayer says he expects no cuts or increases for colleges and universities, but he does hint that funding for charter schools could emerge in the waning days of the session. On pay raises, Thayer says now is not the time to boost public sector salaries with so many people still unemployed and lingering economic uncertainty.

Along with little new spending, Thayer says he doesn’t foresee any tax increases to generate additional revenues for the state. He also says now is not the time for a gasoline tax hike, but he says lawmakers may consider increases to some vehicle-related fees and taxes, as well as a new annual fee for electric cars.

McCoy contends something must be done because he says the Road Fund is netting $200 million less in revenues than it did just a few years ago.

“We are quickly getting to where gas is not going to be the appropriate way to pay for our infrastructure,” says McCoy “Because of where we’re situated, we have so many vehicles running through our state that are causing an impact on our roads, but we’re not collecting enough to even repave the roads we’ve got.”

If lawmakers don’t act now to address infrastructure funding, Thomas says Kentucky roads will be in terrible shape by the end of the decade. He says the state should levy fees on electric vehicles and implement a small tax increase on commercial trucking.

As for other potential revenue sources, Thayer says medical marijuana does not have the votes to pass the Senate. Gov. Beshear proposed taxing production and distribution of medicinal cannabis, an idea that lawmakers of both parties oppose. Thayer adds a proposal to allow sports wagering will also be tabled this year. But he says legislators could revive a refundable tax credit to lure film and television productions to the state.

Republican leaders also want to address the unemployment insurance crisis. In addition to thousands of unresolved claims that have accumulated over the past year, a recent audit of the state’s unemployment insurance office found it received 400,000 emails that went unread. Thayer says lawmakers want to give Beshear tools to fix the system.

“Gov. Beshear has bungled it,” says Thayer. “I just don’t think he understood when he shut down the economy what was coming, and our system wasn’t ready for it.”

While Republicans blame Beshear for the unemployment mess, Democrats fault the system the governor inherited from the Matt Bevin Administration, including outdated computer technology and shuttered unemployment offices.

“People are hurting, people are losing their homes, they’re losing their cars, they’re behind in utilities,” says Graham. “We need to work together to try to find mechanisms by which we can help the people across this commonwealth.”

McCoy says he’s concerned about how to pay back the $700 million dollars the state borrowed from the federal unemployment trust fund to cover benefits for out-of-work Kentuckians. He also wants to protect employers from a spike in unemployment tax rates. A measure to reopen unemployment offices passed the House with bipartisan support and awaits Senate action.

In education, McCoy is the sponsor of bills that he says will give parents more options for their children. He wants schools to accept non-resident students and allow state funding to follow those students to their new schools. He also proposes to create a tax credit for people who donate to non-profit organizations that provide grants and scholarships to poor families who want to send their children to a different public school.

“This is about giving people who don’t have the means the ability to educate their children,” says the Republican.

McCoy’s original proposal included the option of sending a child to a private school, but in response to feedback he’s removed that provision. Graham, who is a retired history teacher, says he’s still uncomfortable with the proposals because he fears they could further undermine struggling schools and lead to overcrowding in neighboring districts.

“I believe it’s a threat to public education, even though private schools have been taken out,” says Graham.

The full legislature returns to Frankfort on Thursday. Thayer predicts lawmakers will complete work on the state budget and other Republican priorities by next Tuesday, which will give them time to override any gubernatorial vetoes before the session ends on March 30.

“Our approach is going to win the day because we’ve got the votes to do it,” says Thayer. “We have supermajorities in the House and the Senate. We have ability to override the governor, which we will do.” 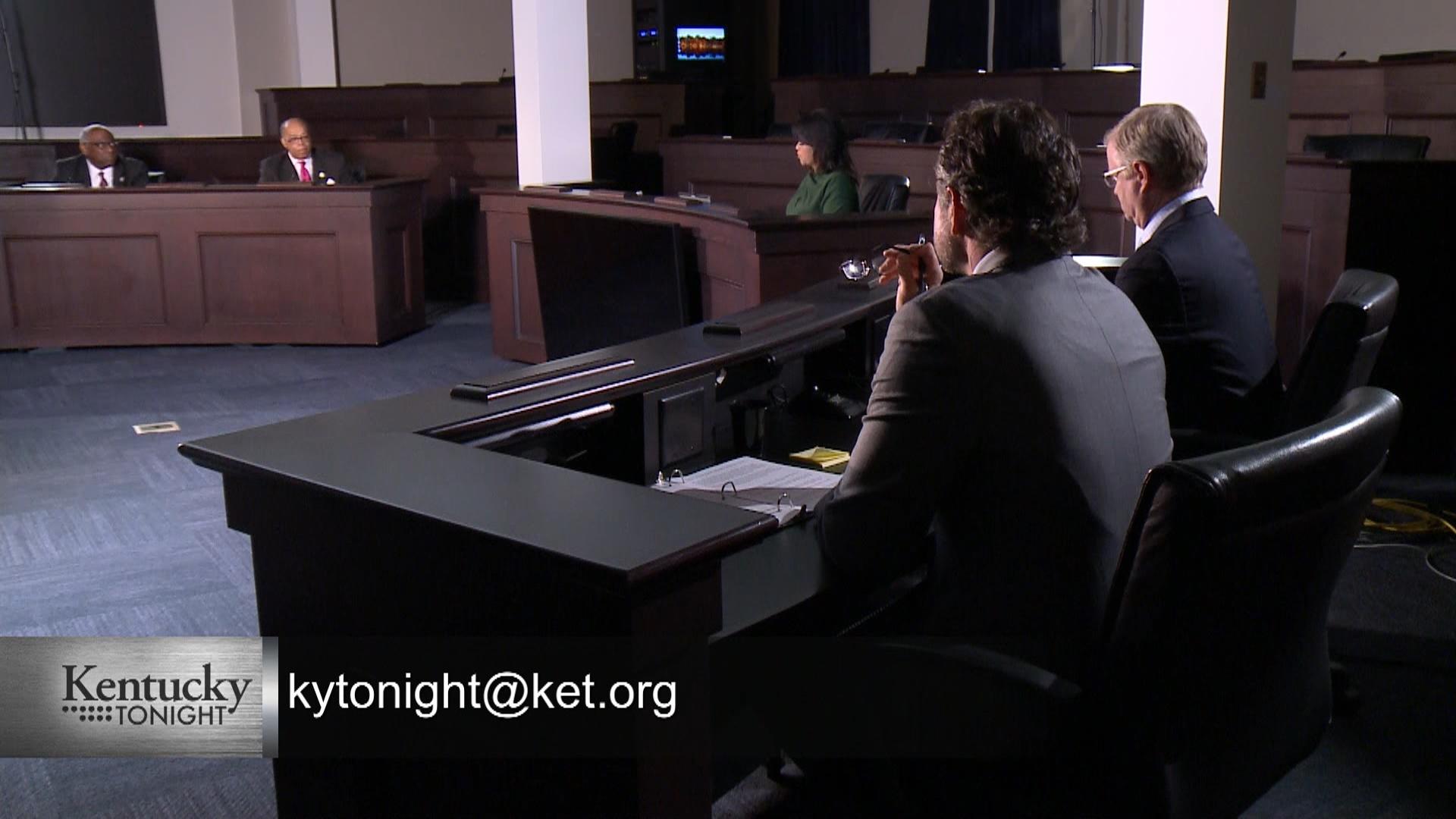