There seems to be unanimous agreement in Frankfort that the commonwealth’s outdated tax codes need to be reformed.

But good luck finding a consensus on what that overhaul should mean for individual and corporate taxpayers as well as for a state with mounting education, infrastructure, and public pension bills.

The Goals of Tax Reform
State policymakers on both sides of the aisle have argued for years that the tax codes need to be updated, but none of them have mustered the political will to make it happen. McDaniel says it will take a strong executive with a mandate to pursue reform and the courage to accept that the process will create winners and losers. The senator says a reform effort should result in one comprehensive bill that addresses all state revenues and brings Kentucky’s tax policies in line with the modern economy.

“If we are going to really do this, everything that government collects will have to be on the table,” says McDaniel. “It’s going to be a tremendous undertaking and one that has to be done very contemplatively, one that has to be done with a great deal of respect for the positive or negative impact that it bears on the economy of the commonwealth.”

Senators McDaniel and McGarvey disagree on whether reform should result in new revenues for Kentucky. The Republican contends that the state already has adequate funding if properly appropriated to budget priorities. McDaniel says tax reform is nothing more than a tax increase if it results in an immediate boosting of revenues into state coffers.

McGarvey argues that the state’s current tax policies are based on a manufacturing economy that no longer exists in Kentucky. The Democrat contends that government agencies and programs aren’t working like they should because their budgets have been cut multiple times in recent years. McGarvey says that’s why an updated tax code must generate additional moneys for the commonwealth.

Possible Changes for Individual Taxpayers
That doesn’t necessarily mean a tax increase, though. McGarvey says the state could lower the individual tax rate on most Kentuckians and still have enough money to pay for education, health care, infrastructure and public pensions if lawmakers are willing to broaden the tax base. One option for doing that is to levy the sales tax on more services.

Jason Bailey says Kentucky currently taxes about 28 kinds of services, whereas other states tax more than 150 service categories. He says the state of Iowa taxes a broad range of services but at a relatively low rate. Other states target luxury services such as dry cleaning, professional landscaping, or limo rentals and tax them at a higher rate.

Another reform option is to shift away from personal income taxes and generate more revenues from sales taxes. Since that strategy focuses taxation more on consumption than on income, Bailey says it would disproportionately impact lower- and middle-class Kentuckians. For example, he says that getting 25 percent of state revenues from sales taxes rather than the income tax would, in effect, result in a tax increase for the bottom 60 percent of wage earners while giving the top 1 percent an $8,000 tax cut. Plus, he warns that an emphasis on sales taxes may not generate sufficient funding for state government operations.

Lawmakers are likely to also consider the fate of the state’s inheritance tax. Gov. Matt Bevin and other Republicans want a full repeal of the tax that’s been in place since 1906. Bailey says most Kentuckians never pay the tax because current law exempts close relatives from having to pay for what they inherit. Yet the state still collects about $50 million a year in inheritance taxes, according to Bailey.

“It’s a very progressive tax – it asks more of those who have more,” says Bailey. “Our tax system overall doesn’t do that. In fact middle-income Kentuckians pay about 10 percent of their income in state and local taxes. Those at the top pay only about 6 percent… So we have sort of an upside-down tax code now.”

Bailey says repealing the inheritance tax would be a tax break for upper-income individuals and deprive the state of needed revenues. McDaniel warns that lawmakers must be careful to craft tax policies that will encourage wealthy Kentuckians to remain in the commonwealth and not be tempted to move to a state with more advantageous tax policies.

Rethinking Corporate Taxes
That philosophy also applies to business and corporate taxes. McDaniel contends it’s all too easy for a company to move their operations to states that can offer them better deals on corporate taxes.

Several state governments, including Kansas and North Carolina, have enacted major tax cuts in recent years as a way to boost economic development. As appealing as lower taxes are to voters and corporations, Bailey says they don’t necessarily attract new business or help a state’s overall economy. He says the drop in revenues that Kansas subsequently experienced forced lawmakers there to make massive budget cuts and caused the state’s credit rating to be downgraded three times. Meanwhile, North Carolina’s state government, which Bailey says once had the highest income taxes in the South, now finds itself slashing services and hiking public university tuitions to compensate for the revenues it lost to tax cuts.

“You have to make sure that what you’re doing is connected to reality,” Bailey says. “There’s this assumption that if you just lower taxes for businesses or those at the top, that you’ll get entrepreneurs and business to flock to the state. It just doesn’t pan out.”

McDaniel acknowledges that the Kansas tax overhaul did have some flaws, and it assumed mineral extraction revenues that didn’t materialize. But he says the state has experienced more job growth in the past 24 months than it had in the previous 14 years. McDaniel says Ohio experienced economic growth after lawmakers lowered business tax burdens and broadened the state’s tax base. The senator says Kentucky lawmakers can learn from the experiences of other states as they go about crafting a new tax policy for the commonwealth.

In addition to the overall corporate tax rate, many businesses may qualify for exemptions or other tax incentives. Those breaks may make good economic sense on a case-by-case basis, but Bailey says the cumulative effect is astounding: Kentucky tax codes now contain $2 billion more in various exemptions than the state actually collects in tax revenues each year. He says tax reform must include an accounting of each of those breaks and eliminate those that can no longer be justified against the greater need to fund public services.

McDaniel counters that more than 80 percent of the $12 billion in tax exemptions currently written into the tax codes go to individuals and not business interests.

Other Revenue Options
The forthcoming tax reform discussions could revive other issues that have been debated for years in Frankfort. McGarvey says lawmakers should once again explore expanded gaming and allowing medicinal or recreational marijuana if all revenue options are truly going to be open to consideration. He acknowledges that both gambling and marijuana are, at best, “band aid solutions” for generating income, and are unlikely to pass muster with many lawmakers.

The Democrat says legislators could also consider a local option sales tax measure that would enable city and county governments to temporarily increase a local sales tax to fund infrastructure projects. That taxing mechanism would require approval of the General Assembly and voters through an amendment to the Kentucky Constitution.

McGarvey also supports creating a state earned income tax credit to offset some of the tax burden on working families and perhaps even refund some of their taxes to them.

“This is money that’s going back into people’s pockets, and then of course it’s coming right back into the economy” as they buy necessities, says McGarvey. “I think that that’s a fair thing for our working class people in Kentucky.”

When the legislature convenes in January, Republicans will control both chambers of the General Assembly as well as the executive mansion. Even with those majorities, McGarvey says he hopes GOP lawmakers will work with Democrats to craft a tax overhaul plan that will be fair for all Kentuckians. 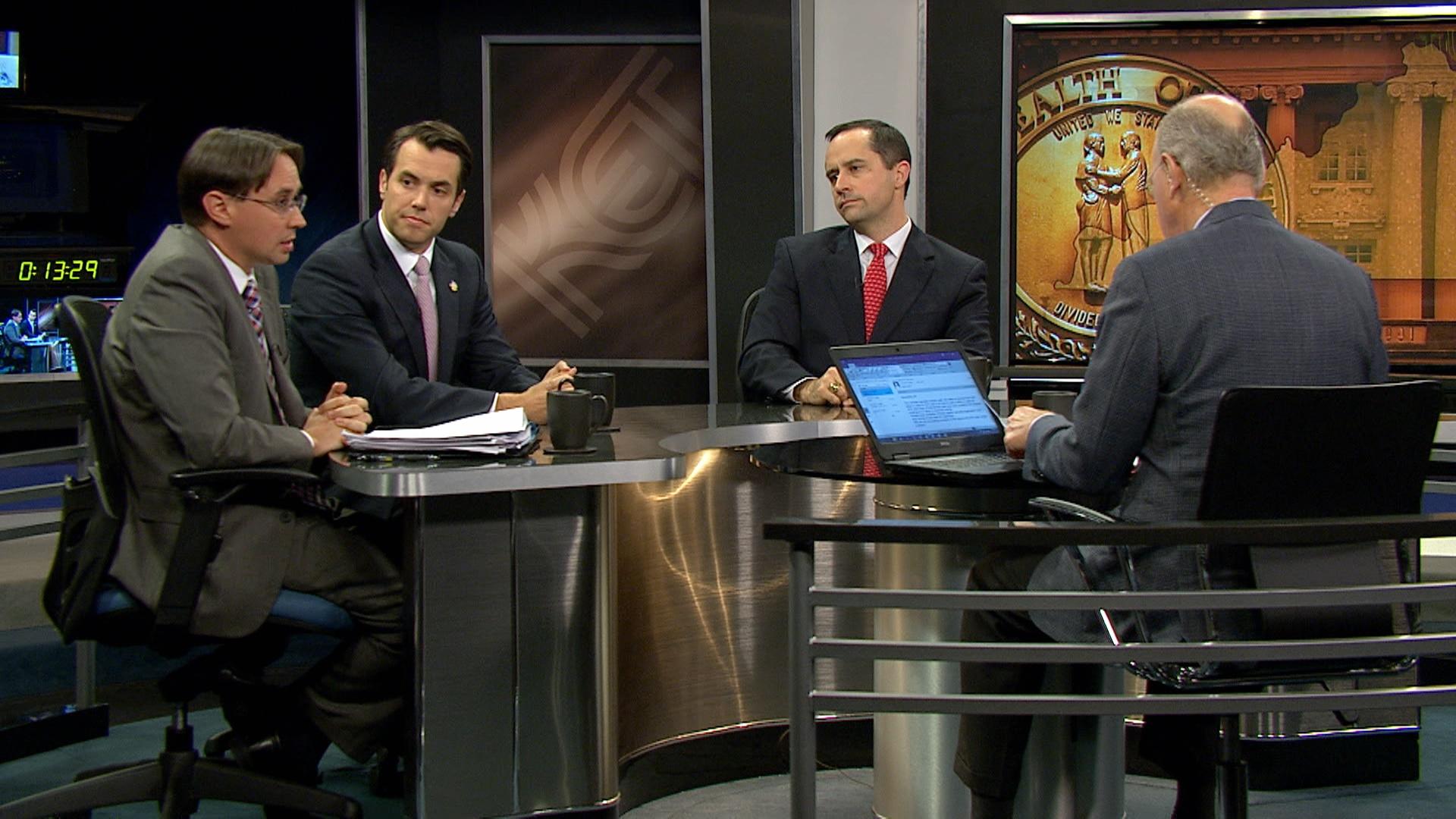