Is an increase in the state’s minimum wage a pathway to greater job growth and a stronger economy, or will it lead to fewer entry-level jobs and higher costs for goods and services?

The panelists on KET’s Kentucky Tonight explored those questions as they discussed the latest proposal to boost the minimum wage in the commonwealth. The guests were Sen. Reginald Thomas (D-Lexington); Rep. Jerry Miller (R-Louisville); Kenny Colston, communications director for the Kentucky Center for Economic Policy; and Tod Griffin, president of the Kentucky Retail Federation.

Twenty-nine states plus the District of Columbia have minimum wages that are higher than the federal minimum, including four that border Kentucky: Illinois ($8.25), Missouri ($7.65), Ohio ($8.10), and West Virginia ($8.75). Indiana and Virginia have not raised their minimum wages, and Tennessee has no state minimum.

Two municipalities in Kentucky have already raised local wages. In Louisville, the hourly minimum is $7.75 and will plateau at $9 in 2017. Lexington passed a wage increase in November that will gradually increase the minimum there to $10.10 an hour by 2018. However the Kentucky Supreme Court is reviewing whether local governments have the authority to change the minimum wage rate for their communities.

Last summer former Gov. Steve Beshear raised the minimum wage for state executive branch workers and for employees of companies that contract with the executive branch to $10.10 an hour. Gov. Matt Bevin rescinded that order shortly after he took office in December. (That applied to new hires going forward. Current workers that had already received the increase got to keep their raise.)

Who Benefits from Higher Wages
Research indicates that about 25 percent of Kentucky workers (or about 193,000 people) would benefit from a minimum wage increase. Kenny Colston of the Kentucky Center for Economic Policy says the pay boost would especially help women, single mothers, and older workers

“This idea that teenagers are a large portion of the minimum-wage workforce is not really true,” says Colston. “It’s people [of] older age, close to retirement age, or it’s main income earners for their families that are adults.”

But Tod Griffin of the Kentucky Retail Federation says the data also shows that about 5,000 people would also lose their jobs if the minimum were raised to $10.10 per hour, and that younger, less experienced workers would suffer the most. He says those industries, like retailing, that are especially labor intensive would see the greatest impacts.

“We know that when you increase the cost of labor… those employers have to make decisions,” Griffin says. “What will they do? It could be fewer jobs, it could be fewer hours, it could be less benefits to the employee, they may be forced in the end to raise prices to consumers.”

Rep. Miller adds that he’s talked to employers who say they will simply automate low-skilled or entry-level job functions, thus reducing the hours and the number of workers they need to operate their businesses.

“It’s good intentions that have unintended consequences,” Miller says. “Quite often it is the low wage people that lose hours. They may make more money per hour, but they’re losing hours.”

Job Growth and Competition
Even with more than half of American states opting to set base wages higher than the federal minimum, Colston says there’s little information showing how employers respond to higher labor costs. He notes that paying employees better does tend to decrease turnover and make workers more productive, which reduces recruitment and training costs for employers.

Then there’s the overall economic stimulus. Colston says a study by the Federal Reserve Bank of Chicago shows that for every dollar the minimum wage is raised, those workers will spend an extra $3,000 dollars the following year.

Sen. Thomas says he believes Louisville and Lexington are already experiencing the ripple effects of higher wages. He says that in the past year alone, Louisville’s average unemployment rate has dropped nearly a percentage point under a higher minimum wage.

“What do these minimum-wage workers do with this additional money? They spend it,” says Thomas. “They buy clothes, they buy food, they buy consumer goods… Once you increase consumer demand, what do you do? You increase jobs. It has a dynamic benefit that benefits the entire economy.”

Competition is a concern, though. Rep. Miller was a Metro Louisville Council member when that city passed its minimum wage increase (he voted against it). He attributes Louisville’s lower unemployment to the overall improvement in the national economy. Miller contends the Kentucky and Indiana counties that surround Jefferson County all have the $7.25 wage floor and all have lower unemployment than Metro Louisville. He also says the states bordering Kentucky that have increased their minimums also have on average higher unemployment rates.

Miller adds that if the commonwealth does increase its minimum to $10.10 per hour, it will be far above what even the surrounding states with higher minimums currently have, which will create a competitive disadvantage for the commonwealth. He gives the example of the Kentucky Kingdom amusement park in Louisville. Miller says it would face significant economic consequences if it has to pay a $10.10 minimum while its primary competitor, Holiday World in southern Indiana, pays its workers only $7.25 an hour.

Colston doubts there would be a mass exodus of jobs from Kentucky to neighboring states because he says many additional factors play into where employers locate. He says research indicates that New Jersey, where the minimum is now $8.38 an hour, has not lost jobs to Pennsylvania, where the minimum remains at $7.25.

Effects on Poverty
Supporters of higher pay also stress that those earning the current minimum wage have great difficulty making ends meet. A Kentuckian working full-time for $7.25 hour earns an annual income of just over $15,000.

Supporters also contend that the minimum wage hasn’t kept up with the cost of living over the years.

“If the minimum wage had kept up with the growth in inflation since the 1960s, it would now be over $10 an hour… If it had actually kept up with economic productivity, it would $18.30 an hour,” Colston says. “So there has been an erosion of wages.”

But even $10.10 an hour isn’t a living wage by many standards. For example, an economic calculator created by the Massachusetts Institute of Technology shows that a living wage for one adult with one child in many Kentucky counties would be at least $18 an hour, which is far below the current minimum and the proposed increase.

Thomas says a higher minimum wage will help low-wage workers and their families but he says it won’t solve the endemic poverty issues facing the commonwealth. But increasing Kentucky’s minimum to $10.10 an hour would put an extra $6,000 a year into the pocket of a full-time minimum wage worker. That means that individual would likely need less government assistance, according to Thomas.

Rep. Miller agrees that wage increases aren’t good anti-poverty strategy. He says about 450,000 Kentuckians live at or below the poverty line, so the vast majority of them won’t benefit from the pay increase proposed in House Bill 278.

“Minimum wage is not a very efficient way of raising people out of poverty,” Miller says. “But I think what is, is getting people off welfare to work.”

The trick is ensuring that poor people don’t adversely suffer from a sudden loss in state and federal assistance as their incomes begin to rise. Miller says an Earned Income Tax Credit (EITC) for low-income individuals and families would be a good way to ease the pain of them losing their government benefits.

The Kentucky Retail Federation’s Griffin says that EITC is a good idea because it shifts some of the financial burden of labor costs off of businesses. He says he can’t find any evidence that proves increasing the minimum wage shifts people off welfare, but he does agree there needs to be a better way to put low-wage workers on the path to greater financial security.

“What we really need in this state and in this country is a true welfare to work program,” says Griffin, “that transitions workers so that they’re incentivized to go to work, to earn more money, to increase their lot in life and transition them off assistance so that they can become better citizens, provide for their families, and lower the costs to all of us as taxpayers.” 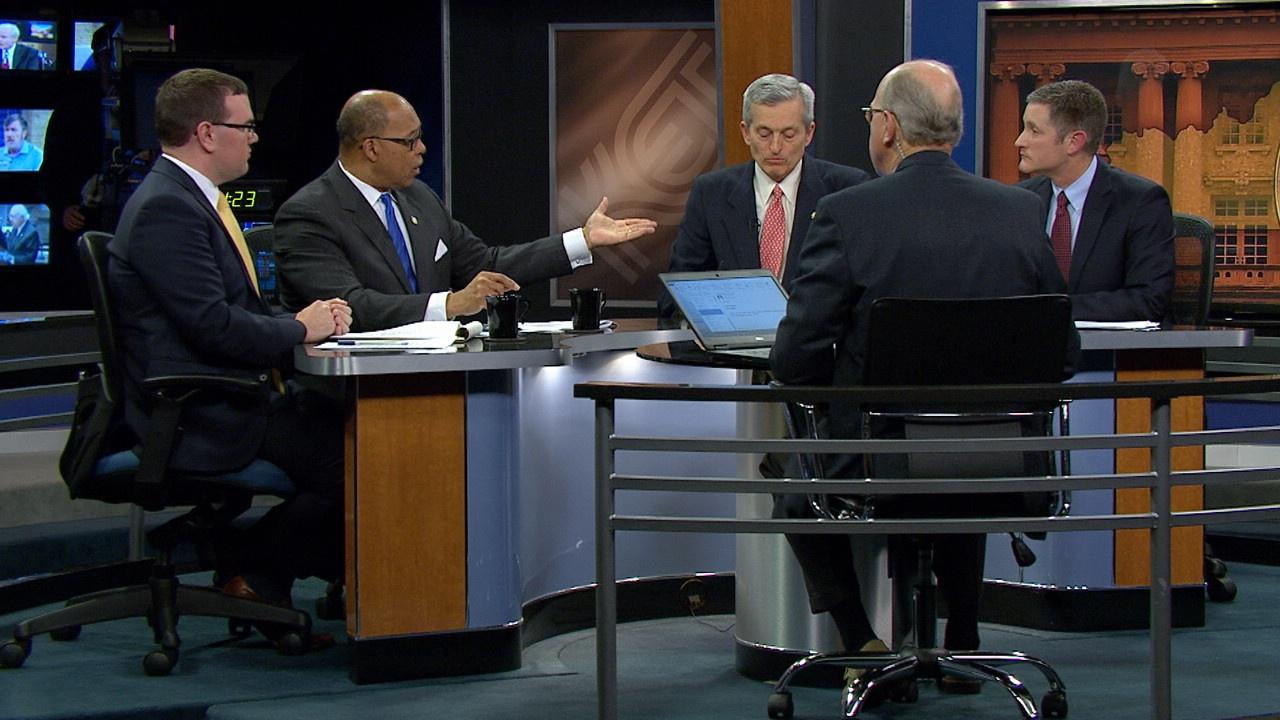