In the days that followed the torrential rains that devastated dozens of eastern Kentucky communities in late July, public schools were a vital part of the recovery effort. In Floyd County, nine of the district’s 13 school buildings became shelters for people who needed respite from the heat, shower facilities, an internet connection, or a place to charge their mobile devices and do laundry. Superintendent Anna Shepherd says cafeteria personnel also prepared and served 5,000 meals a day for victims.

For Floyd Countians who couldn’t make it to a school, district staff even drove buses stocked with relief goods to people in isolated areas.

“We wanted our kids to be able to see the bus coming to their neighborhoods and up their hollows with supplies and food, says Shepherd. “We thought that would make them smile and give them some hope.”

“Our schools really do serve as the center of our communities in rural eastern Kentucky,” says Wallace Caleb Bates, an intern and writer at the Kentucky Department of Education. “In the wake of this event, our schools showed up and our school communities rallied together.”

With so many students and staff impacted by the flooding, and school buildings damaged by raging waters, several districts were forced to delay the start of their new academic years. For Letcher and Knott County Schools and the Jenkins Independent Schools, classes didn’t reopen until last week. Students in Perry and Breathitt County returned to school on Aug. 29.

“We’re just overwhelmed with joy to have them back on campus,” says Breathitt County Superintendent Phillip Watts.

The county’s high school, which was damaged in flooding in 2021, was inundated again in July. Waters also rose several feet in the district’s area technology center, covered the high school’s football field, and swamped a bus garage.

Watts says 280 of his students come from homes that sustained heavy damage or were a complete loss. He says some families have temporarily relocated to neighboring counties and are driving their children back to Breathitt to attend their regular school. With so many people still working to regain a stable home life, Watts says it’s critical for schools to provide a feeling of safety and normalcy for children in the classroom.

In Perry County, Robinson Elementary and the Buckhorn School, which serves students in kindergarten through 12th grade, received catastrophic damage from the creeks along which they are located. Superintendent Jonathan Jett says Robinson is a total loss, but Buckhorn can be renovated. He says those repairs will start soon with hopes that students can return for the 2023-2024 school year. For now, the 580 children from Robinson and Buckhorn are attending classes in an old elementary school that had been closed due to consolidation.

“We’re just thankful to get kids back in school,” says Jett. “We want to make sure that we’re taking care of them not just physically but emotionally as well. They’ve been through a lot and we want to be a resource to provide any services that they need.”

Some portions of eastern Kentucky saw upwards of 16 inches of rain between July 25 and 30, decimating homes, businesses, and infrastructure in the mountainous region. Kentucky Education Commissioner Jason Glass says he feared some schools might not resume for many months.

“Unless you were there and have seen it, you really can’t imagine the devastation,” says Glass. “It’s really a heroic lift what all of these communities have done to get back open.”

In many ways, though, Glass says recovery efforts have just begun in terms of rebuilding lost roads, bridges, and schools.

“Even though things are much more stabilized than they were a couple of months ago, we shouldn’t assume that everything has returned to normal just yet,” he says.

Officials worry that the disaster will exacerbate the exodus of people leaving Appalachian Kentucky initially brought on by the decline in the coal industry. As a result of the flooding, Watts says Breathitt County has lost 50 students as families have moved away from that district. Whereas a normal average daily attendance might be 93.5 percent, he says his schools are seeing only about 90 percent attendance since reopening from the flood.

Perry County has also seen about a 4 percent drop in average daily attendance, according to Jett. He says the families of about 50 of his students have left the area.

“We hate to lose students to other districts for any reason,” says Jett. “But when a tragedy like this happens and they don’t have a choice but to leave, that makes it that much more difficult.”

State funding for public schools is tied to the number of students each districts serves. Glass says even a 4 percent drop in attendance can result in a significant reduction in funding a district receives from the state. He says that would likely force a district to absorb that loss by cutting staff.

Because of COVID disruptions and closures, the state has allowed districts to use average daily attendance figures from the 2018-2019 school year as the basis for calculating funding during the pandemic. Jett says that allowance will continue for one additional year, but what will happen after that is uncertain.

To help schools in flood-impacted counties, and in western Kentucky areas damaged by tornadoes last winter, Glass says lawmakers could allow districts to continue to use old attendance figures to calculate school appropriations for forthcoming years. He says they could also freeze funding at some historic level, or devise a gradual transition back to funding based on current attendance numbers.

“You’ve had an event, a tragedy take place,” says Glass, “so it makes some sense to think about how can we ease the decline in funding to allow them to absorb some of the losses without having to put in place massive layoffs.”

Beyond the potential for less state money because of lower student populations, Glass says some districts could also experience a decrease in local funding. With so many homes and businesses damaged or destroyed, property tax collections in disaster areas will decrease, meaning less money available to go to local schools.

“The legislature will need to consider some stabilization for that,” says Glass.

Funding will also be crucial for school districts that need to repair and rebuild structures damaged by the flooding. Glass says it could cost as much as $25 million to replace a single elementary school. A new high school could be as much as $80 million.

For the small, rural districts of eastern Kentucky, price tags like that are insurmountable.

“We don’t have money in our budget to renovate Buckhorn or construct a new Robinson, so those funds would have to come from the state level, the national level, or FEMA,” says Jett.

Even with proper funding, the rugged mountain terrain leaves few options for building a new facility, especially in a location that would be out of the flood plain.

“Land is a premium in eastern Kentucky,” says Jett. “There’s a lot of former strip mine property, but road access is an issue, so that’s a big hindrance when you’re looking at property that’s large enough to construct a new school on.”

With little funding, limited available land, and declining enrollments, some districts may be faced with the difficult decision to simply close and consolidate schools.

“It’s not a real popular decision, but we have to look at all options where we can best meet the needs of the students,” says Jett.

In Breathitt County, the Marie Roberts-Canney Elementary School was already set to close in January as part of a consolidation move there. Watts says the district also closed a middle school several years ago, and added those grades to a nearby high school.

“It was all about opportunity and access,” says Watts. “It opened up a lot of our dual-credit classes, our AP classes. We got back to offering our kids some vocational school classes.”

While consolidating schools may be fiscally prudent, Glass warns that such decisions are contentious and difficult for superintendents and the communities they serve.

“Closing a school or consolidating a school is an emotional conversation as much as anything because people have memories in those schools, and the school has meant a lot to that community,” says Glass.

State lawmakers convened in a special legislative session in late August to approve a $213 million relief package for flood-damaged areas of eastern Kentucky. That bill included $40 million for public schools.

Glass and the superintendents say they are grateful for that assistance, but warn they will need more aid going forward. Beyond repair and rebuilding costs, they say they will need money to cover increased transportation expenses and funds to recoup food service budgets they tapped to serve emergency meals.

Mental health services and trauma-informed care will also be critical. Educators say COVID closures and remote instruction adversely impacted the emotional well-being of many students. Now the loss of a home or death of a loved one due to flooding will only make matters worse for some young people.

Jett says school teachers and staff must be prepared to help students deal with the stress and trauma of the past two and half years. That care, he argues, should be as routine as daily lessons in math and reading. That’s where the General Assembly can help.

Even as they support the mental health needs of their students, many eastern Kentucky educators find themselves coping with their own losses. Jett says flood waters washed away all the possessions of several of his staff members. Watts says he has 56 employees displaced from their homes or facing significant repairs. In Floyd County, Anna Shepherd says nine of her staff lost their homes and vehicles.

Despite their own personal challenges, education officials say teachers have not hesitated to help students and neighbors in need.

“When the community needs educators, they are there,” says Glass. “So I hope that our legislators remember that because it happens time and time again.” 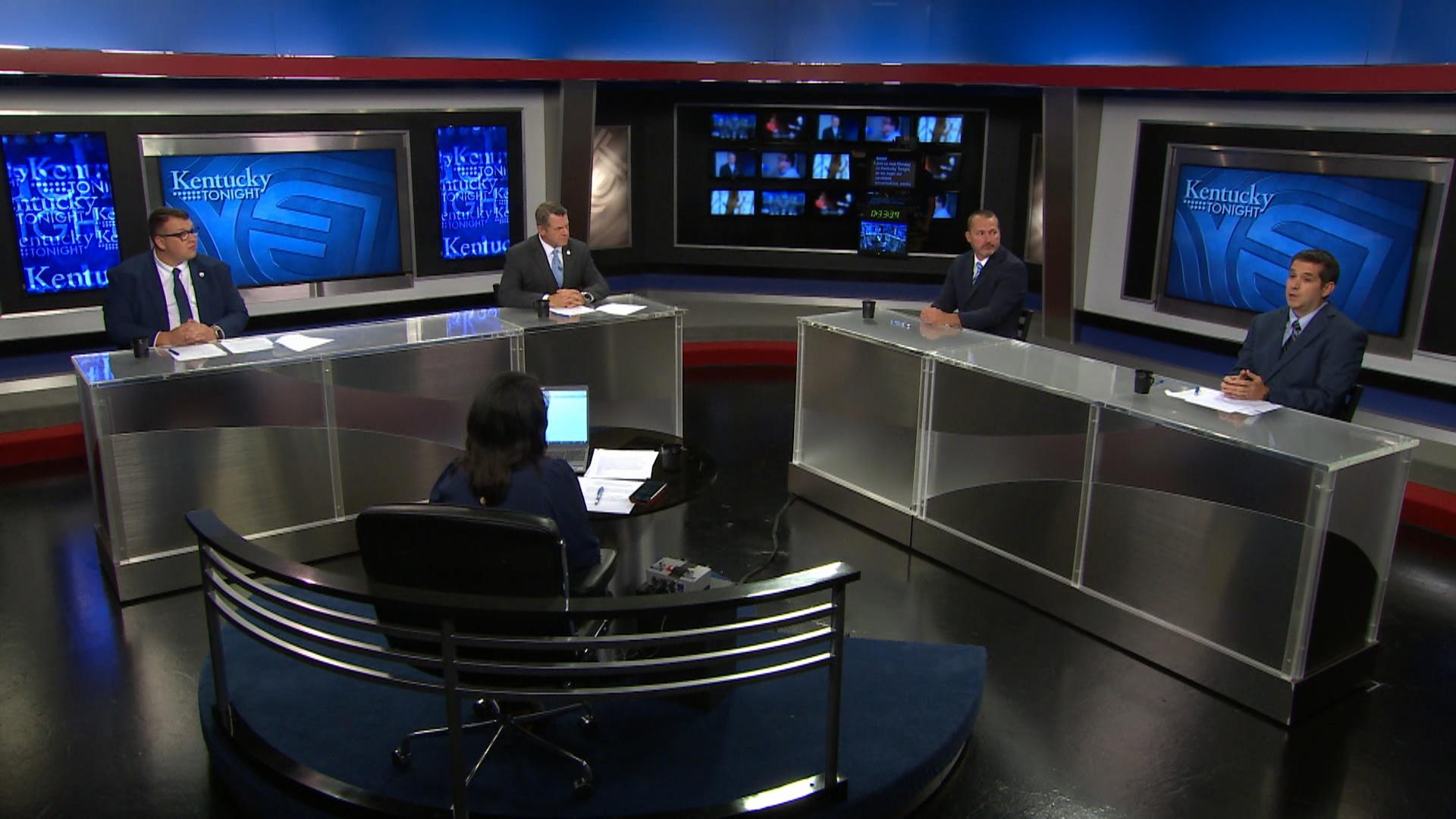