To say the state pension reform framework presented by Republican lawmakers resulted in a complex piece of legislation would be an understatement.

There are countless details contained in the 505-page draft bill released over the weekend. And those details will provide fodder for a multitude of debates in the coming days among legislators, state officials, public employees and retirees, business leaders, and taxpayers.

KET’s Kentucky Tonight explored a few of the details in the proposed legislation. The guests were Dave Adkisson, president and chief executive officer of the Kentucky Chamber of Commerce; Jason Bailey, executive director of the Kentucky Center for Economic Policy; Dr. William Smith, a Madisonville dermatologist and member of the pension reform team for the Bluegrass Institute for Public Policy Solutions; and Stephanie Winkler, president of the Kentucky Education Association.

The Merits of Defined-Contribution Plans
Perhaps the most significant change in reform plan proposed by Gov. Matt Bevin and Republican legislative leaders is to place newly hired public employees and teachers into 401(a) defined-contribution plans rather than into the traditional defined-benefit pension plans. Such 401(a) plans at similar to private sector 401(k) plans but are designed for government employees.

Also if current employees who become eligible for retirement opt to remain on the job, they will be rolled into the new 401(a) plans instead of continuing to pay into their pensions. The one exception is current and future hazardous duty employees who will continue to receive traditional pension benefits.

Critics of the switch to defined-contribution plans, which are more susceptible to stock market fluctuations, contend they don’t provide as secure a retirement benefit. William Smith of the Bluegrass Institute for Public Policy Solutions says that’s especially true for Kentucky’s teachers who aren’t eligible to receive Social Security.

“Our analysis is that teachers who don’t invest very wisely and contribute very heavily and work for longer periods of time are going to end up with inadequate retirement income,” says Smith.

He also says the investment returns the Bevin Administration projects for the 401(a) plans are too optimistic.

“When you have teachers who do not have Social Security and they have a defined-contribution plan only for their retirement security and they don’t earn 7.5 percent for their entire career – and many will not – they will be on welfare,” Smith says. “I guarantee you, you will have teachers under this plan in their 70s and 80s who are applying for welfare and that’s just not acceptable.”

There’s also the concern that it will be harder to attract and retrain qualified people to fill public sector jobs, which traditionally pay less than their private sector counterparts, without the lure of a healthy pension waiting for them at retirement.

Dave Adkisson of the Kentucky Chamber of Commerce says the appeal of a pension is overstated. He says the majority of American workers already enjoy 401(k) retirement plans, so to have the state move to a defined-contribution plan should not be viewed as “an alien plot that’s been brought down from Mars.” He points to the Universities of Kentucky and Louisville as two public sector employers that have successfully switched to offering 401(k) plans to their employees.

Adkisson adds that younger generations of workers now expect to have six to eight different employers during their careers. But pensions, he argues, trap people into working at the same place for decades.

“Kids don’t think that way these days. They want mobility,” Adkisson says. “The portability is more appealing to the young workers of today than thinking 27 or 30 years down the road.”

“No one feels trapped,” says Stephanie Winkler of the Kentucky Education Association. “They do this work because they want to serve the public, and we should, as a government, support people who want to do a good and public service.”

“We lose that when we create a revolving-door workforce,” says Bailey.

But it may be an oversimplification to think in terms of only a pension plan or only a 401(a) plan. Smith acknowledges that structural changes are needed, but he proposes creating a modified defined-benefit plan that caps the employer contribution to 6 percent of payroll and limits any further risk to the state. In return, employees would get retirement plan that they can take with them when they change jobs and provides them a specific benefit for life.

“There is no reason that accrued defined benefits can’t be portable,” says Smith. “You can have the best of both worlds: you can have a defined-benefit plan that’s more efficient, generates guaranteed benefits, and has portable benefits, if you look at it closely.”

Winkler says the KEA also proposed modifications to the defined-benefit plan but she says the Bevin Administration refused to listen to any suggestions that did not involve switching to a defined-contribution retirement package.

More for Retiree Health Care
The Republican reform plan also calls for all public employees to contribute 3 percent of their paychecks to the pool of funds that pay the health care benefits for retirees. The Bevin Administration says that money is needed to shore up unfunded liabilities in the health care pools for the Kentucky Retirement Systems and the Kentucky Teachers’ Retirement System.

Bailey says he was surprised to see the required contribution because he says there’s been no analysis of retiree health coverage, and the PFM Group made no such recommendation in their report to lawmakers on the pension crisis. Although the KRS and KTRS health care pools do have modest unfunded liabilities, Bailey contends the additional funding would be a misappropriation of money. He says the state has already enacted changes to make those pools actuarially sound so that health benefits are prefunded on a sustainable basis.

Even a small 3 percent contribution will add up over time. Bailey says a teacher or state or county employee who works 27 years and makes an average of $50,000 a year will wind up paying about $40,000 into the heath care pool.

“It’s one of the details of this that matters a lot to an employee’s paycheck,” Bailey says, “but it is not necessary to fund those health plans which are already much stronger than most around the country and on a really good path.”

Some argue that the 3 percent contribution amounts to a pay cut for public employees. Given the magnitude of the pension crisis – somewhere between $35 and $60 billion in total unfunded liabilities – Adkisson argues that some sacrifices have to be made.

“People argue with the 3 percent and that’s a painful thing for somebody to take out of their pay stub,” Adkisson says. “But at the same time, if you offered them the choice, would you rather give up 3 percent for your health care in retirement or would you rather have to work 31 years or teach 35 years… They might say, well, the 3 percent looks a little better.”

Other Details of the Reform Plan
Other provisions of the proposed legislation will change sick leave policies, modify the formula for how the state calculates its actuarially required contributions, and amend the governance structure of the pension plans. Winkler says the state’s eight different retirement programs will be rolled into one unified public employee system that will be governed by a board of trustees appointed by the governor. She’s concerned that only one retired teacher and no active educators would be represented on that board.

“It’s very unfair for the people that you’re taking money from that they get no say in where that money goes,” Winkler says.

Bailey says the legislation also exempts the board managing the 401(a) funds from having to report investment fees and procurement policies to the Public Pension Oversight Board. He also worries that private companies will get greater freedom to sell annuities, disability policies, and other investment packages without being required to make proper financial disclosures.

Adkisson agrees that checks and balances need to be in place to ensure proper accountability and management of the retirement funds.

What about the Money?
Bailey says there’s nothing in the legislation that indicates how the proposed reforms will pay down the unfunded pension liabilities. (A fiscal note on the legislation is expected in the coming days.) Based on his calculations, Bailey says the new defined-contribution plan will actually cost about the same as the existing defined-benefit plan. That makes Bailey wonder why the state would bother switching, especially since the current pension plans will become even more unstable without new hires contributing to the existing system.

“So for the same cost, we can deliver a much more secure benefit that people can count on, that will be larger because the investment returns that went in to it are bigger in a defined-benefit plan, and we can retain and attract the workforce we need,” Bailey says. “It’s a no brainer.”

Instead of rushing to pass this reform package, Bailey says lawmakers should slow down and do a more thorough review of all their options, including raising additional revenues. For example, he says eliminating just 10 percent of state tax exemptions would generate enough new revenue to pay down the pension debts and reinvest in public services that suffered steep funding cuts during the recession years.

Adkisson agrees that existing tax breaks deserve a rigorous examination. But he adds that the changes that would generate the most revenues – taxing groceries and eliminating deductions for charitable contributions on home mortgage interest – would also be the most unpopular.

“We favor tax reform,” says Adkisson of the Kentucky Chamber, “if tax reform will make Kentucky more competitive for creating jobs and creating opportunities for Kentuckians. If it also produced some new revenue, that would be acceptable.”

Adkisson says he believes about half of the unfunded pension liabilities will be resolved by structural changes to the retirement plans and the other half will be paid off with new moneys going into the systems.

The panelists praised Gov. Bevin and lawmakers for allocating $1.2 billion to the pension plans in the current state budget. But Winkler wonders what will happen in the next budget, when another set of massive pension payments will be due and other public services remain in desperate need of funding. 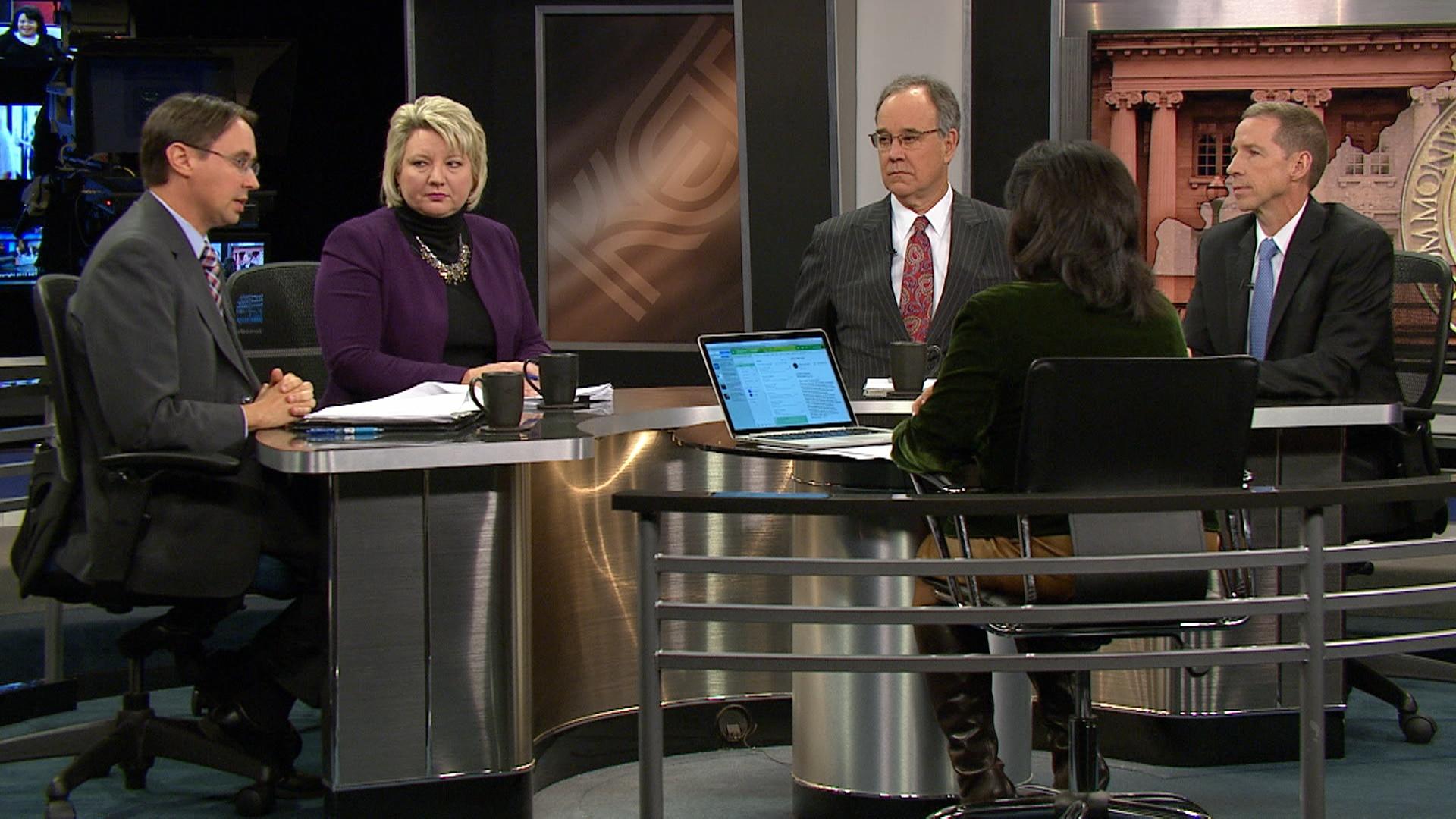