In his proposed budget that cuts nearly every area of state government, Gov. Matt Bevin pledged to maintain basic funding to schools at $3,981 per pupil. While that’s not an increase over the previous budget, Bevin said it was still the most the state has ever invested in public education.

But other reductions elsewhere in the governor’s spending plan could prove detrimental to state schools and leave some districts unable to pay for teacher health insurance or student transportation costs.

Funding Concerns
In all, the funding cuts to education could total as much as $666 million, according to Rep. John Carney.

“We cannot produce the quality of education that we need in our public schools with those types of cuts to the system, particularly in transportation and insurance,” Carney says.

The governor’s budget reduces state appropriations for bus services by $127 million and for teacher health insurance by $54 million. Local schools will have to make up the difference in those areas, and Carney says he knows of 22 districts that simply don’t have the money to do that.

The state traditionally funds 58 percent of the transportation costs incurred by local districts. Under the governor’s budget, the state share drops to 25 percent. Carney says that amounts to $211 per student, which he says equates to a reduction in the basic school funding known as SEEK.

“When the governor said this past summer that it was going to be a brutal budget session, we had no idea that he would begin by cutting so drastically into the safety of transporting our children to schools,” she says.

Flood says she’s believes the cuts could be unconstitutional, since a greater burden will fall on rural districts that have significant transportation costs but smaller tax bases on which to fund local schools. A 1989 Kentucky Supreme Court decision mandated that the state must provide the same opportunity and access to education to all children, regardless of where they live.

Carney says he doesn’t know if the proposed transportation cut raises any constitutional questions, but he does fear that some poorer districts may be forced to scale back their bus routes. He says it’s right and moral for schools to provide student bus services whether they’re legally mandated or not.

As for overall school funding, Sen. Morgan McGarvey says maintaining SEEK dollars at the current level isn’t necessarily a good thing. After adjusting for inflation, he says SEEK funding has actually decreased nearly 16 percent over the past decade. He says that’s the third worst cut to state public education funding in the nation.

“We are not holding education harmless and if we don’t improve it, we’re not improving ourselves as state,” says McGarvey. “Education is the key to fixing our problems. It’s not a quick fix. It’s a generational fix.”

Despite the stranglehold that public pension debts have on the state budget, Carney and fellow Republican Sen. Max Wise say they will work to reinstate as much of the K-12 education funding as possible. Wise adds that he doesn’t agree with everything in the Bevin Administration’s budget, but he says it’s a starting point from which House and Senate members will craft their own spending plan.

“I do commend the governor that he’s trying to work to restore the pension system,” Wise says. “I think it has to be done and I’m glad he’s bold enough to do that. But I think when we’re looking at education in and of itself, we need to make sure that we’re not doing something that’s going to be detrimental to the future of the commonwealth and the children.”

School Choice Issues
For the third year in a row, legislators will consider whether to create a scholarship tax credit in the commonwealth. That would give individuals and corporations a credit on their taxes for donating to non-profit organizations that provide scholarships to students who want to attend a private school. Two such bills have been proposed on the matter:
House Bill 134
and Senate Bill 36

Carney, who is a public school teacher, says he supports school choice options for parents and is the sponsor of the House measure. But he says public school funding must be the first priority of lawmakers this session.

“We want to provide choice and opportunities, but we do not want to provide it at the expense of our other children and with this budget situation, that’s the reality we face right now,” says Carney.

Carney says a provision of his bill would require that a percentage of the scholarships funded through the tax credit would go to low-income families. Groups endorsing the tax credit say it could generate $1.5 million in revenues for the state, according to Carney. But fiscal scoring a similar measure proposed in 2017 indicated that it could cost the state $76 million within six years.

McGarvey says he opposes the measure because it benefits private educational institutions and because it offers a dollar-for-dollar tax credit against a contributor’s tax liability. He says that will cost the state 16 to 17 times more than a standard personal tax deduction for a charitable donation.

“If this results in more money to the state that we can put into [public] education, that’s a different conversation,” McGarvey says, “but I haven’t seen a lot of studies that actually prove that.”

School choice advocates are also eagerly awaiting the formation of the state’s first charter schools. Lawmakers passed legislation last year to allow the schools, but the Kentucky Board of Education is still finalizing the regulations that will govern the charter organizations.

Carney says he thinks the regulations will be completed during this session, but he doubts lawmakers will allocate any money to charter schools. in the new budget. As with the scholarship tax credits, Carney says he wants to restore the cuts to public education before he considers allocating funds to school-choice options.

Democrats continue to oppose charters in the state. Rep. Attica Scott (D-Louisville) and nine other House Democrats have filed a bill to repeal the charter school legislation Republicans pushed through last year. Flood says there’s no need for charter schools or the bureaucracy to govern them since school choice already exists through Districts of Innovation programs that provide more specialized education opportunities.

McGarvey says he understands why parents might want new classroom choices for their children, but he contends charters aren’t the answer.

“When you systematically cut funding to your public schools for 10 or 15 years, people are going to start to think, is there something better out there?” McGarvey says. “Maybe that thing that’s better is the public school you’re in right now if we can reduce the class sizes, if we can have more technology in the classroom, if we can have more amenities and art and PE and other types of programs that we’ve been cutting because we haven’t had enough money.”

School Safety
A range of education bills are expected to be considered during this legislative session, including measures dealing with essential workplace skills to funding for family resource centers to changes for school site-based decision-making councils. Following the Jan. 23 shootings at Marshall County High School in which two students were killed, Sen. Stephen West (R-Paris) filed a bill to allow armed marshals to patrol school campuses.

“Those of us who don’t own guns are not necessarily made to feel safer by that kind of a proposal,” Flood says, “but I respect that those who do own guns may.”

Flood says she could support the idea of armed marshals if the legislation also required schools to hire a full-time nurse or counselor who would help address student mental health concerns.

Some districts already have law enforcement officers who serve as so-called resource officers to provide security in schools. But Carney says expanding that to include every school facility in the state would be difficult given all the funding challenges already facing public education.

“We have to reach out to community partners – our law enforcement – and ask them… what more can you do in our local communities, providing, maybe, a resource officer for a school,” Carney says. “I think any other sources that [lawmakers] can find, we have to invest into mental health.”

Carney adds that most school administrators he’s spoken to don’t want to carry guns themselves and therefore wouldn’t want to serve as armed marshals.

Wise agrees that schools should try to partner with local sheriffs and health care providers to help provide security and counseling services in schools. He says the issue requires cautious and deliberate consideration, not a “knee-jerk reaction” to one tragic school shooting.

Finding More Money
Given that funding is such an issue across the state budget, would lawmakers consider raising revenues to help alleviate the perennial budget woes that plague public education?

“We’ve got to do some type of tax reform and tax modernization to get us up [to] where we’re competing against Tennessee and Indiana,” says Wise.

Flood says Democrats understand tax reform isn’t easy, but she says a good place to start the conversation is by reviewing the billions of dollars in tax exemptions the state offers.

“We have done a lot of cutting in the last Great Recession – over $1 billion was cut out [of the budget],” says Flood. “It is time for us to put the same scrutiny to the $13 billion that are tax expenditures… This body, we’re capable of those decisions and I think it’s time.”

Flood says she’s pleased that her fellow lawmakers on the program agree that public education must be a funding priority. She says that should send a clear message to educators and parents that legislators will exercise their independence to amend the governor’s budget proposal.

Carney says he wants education advocates to avoid panicking. He says legislative leaders will find solutions that will put the state’s public schools on a stable long-term path.

Wise echoes those sentiments, saying that despite the difficult decisions the tight budget will force, he wants to be as fair as possible to the needs of schools and students.

“One thing we don’t want this session to be, I can tell from the legislative branch, is a war against public education,” Wise says. 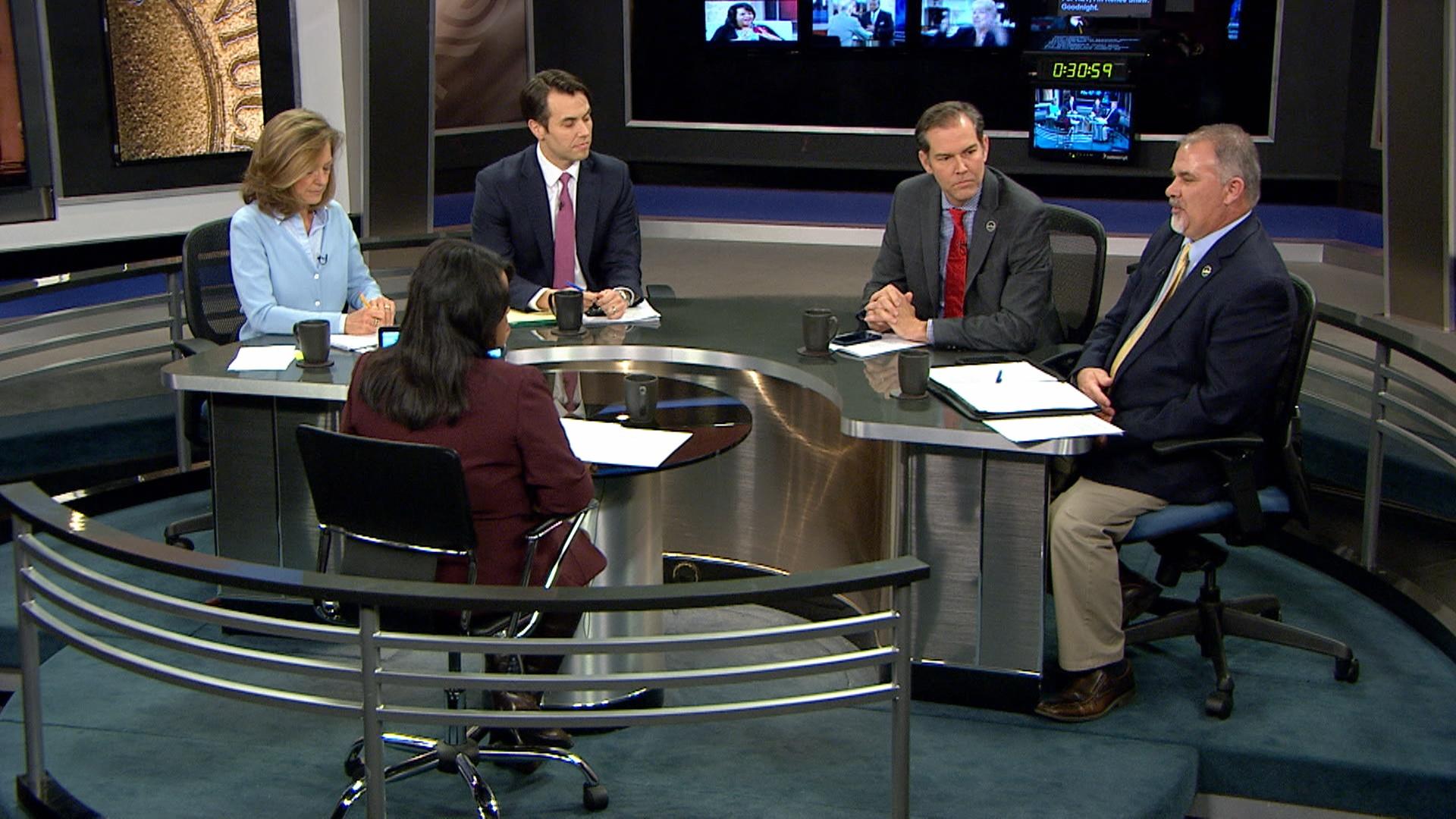