The 2016 Election and a New Era in Kentucky Politics

Even those who make their livings studying and teaching about American politics say they were surprised by this year’s election cycle. From the power of social media and nontraditional voters, to questions about emails, mainstream media, and the Electoral College, the 2016 elections will provide academics much to analyze in the coming years.

Here are their 10 takeaways from last week’s elections.

1. The Trump Turnout
Whether you call them nontraditional voters, angry voters, or “deplorables”, a significant number of working class individuals with economic concerns broke for Republican Donald Trump, says Michael Hail. That trend may have been hard to capture in national polls, according to Hail, but he says he saw indications of it by looking at coverage from smaller media outlets, local polling, and social media in key states.

Nancy Cade says she’s fascinated by how white, under employed, less educated people voted for the billionaire CEO who represents much of what most angers them. She says this election allowed them to have a voice in a political process from which they feel increasingly excluded.

Democrat Hillary Clinton tapped into that mood of discontent when she called Trump supporters a “basket of deplorable,” Anne Cizmar says she saw Trump voters who embraced that label with pride.

“[They] were very actively speaking out against that rhetoric of singling them out as people who maybe aren’t as good or don’t have as much to offer in the political sphere,” Cizmar says.

Those voters also have a strong sense of independence, says Scott Lasley. He says they rebel at the notion of the media, celebrities, or intellectual elites telling them how they should think or vote. Lasley adds that politics has as much to do with emotions as reality, which could explain the real estate mogul’s appeal to lower- and middle-class voters.

2. Clinton’s Failures
Despite having the bigger, more organized campaign machine, Cade says that Clinton simply didn’t do enough to woo the voters she most needed, whether that was in certain states (like Wisconsin) or among some demographic groups (like white, educated women over 50 years old).

“It’s not so much a Trump victory as a Clinton loss,” Cade says. “He got approximately the same number of votes that [former Massachusetts Gov. Mitt] Romney did [and] [Sen. John] McCain did but she did so much worse.”

Lasley adds that he thinks Clinton struggled with older women and married women. Even with the videotape of Trump making sexually suggestive comments, Lasley says many married women stuck with the Republican.

3. The Myth of the Blue Wall
Clinton, the media, and many political pundits fell victim to what Cade calls the “myth of the blue wall” – that certain states like Pennsylvania, Michigan, and Wisconsin would always vote for the Democrat. The party has depended on those and other traditionally blue states to help fend off a GOP victory in the Electoral College. But this year several traditionally Democratic states went for Trump.

Because those states were presumed to be safe for Democrats, Cizmar says poll watchers focused on North Carolina and Arizona and got blindsided by what was happening in those old-line blue collar states.

4. Woe Is Media
Shouldn’t the media have seen these trends coming and predicted a different outcome than the likely Clinton victory that many outlets reported?

“It’s a mistake to throw the media under the bus too much.” says Lasley. “The job they do… is tough and it’s getting tougher.”

He contends it was difficult to accurately analyze Trump, who was an unconventional candidate running such an unprecedented campaign. Plus Lasley says even the president-elect himself was surprised by the results. He says Trump spent more time working on his concession speech than on his victory speech.

One aspect of political coverage does trouble Lasley: the fractured nature of the journalism industry these days. He says the media no longer has the unifying effect that it did when there were far fewer news outlets. Now he says Americans can choose the outlet that affirms their preexisting beliefs. He’s also concerned about how the traditional media has been undermined by the popularity of nontraditional sources like “The Daily Show” or Facebook.

5. The Role of Social Media
Michael Hail says campaign money may not win elections any more.

“One thing that happened in this election that is very different from some of the other cycles is the use of social media by Donald Trump,” says Hail, “and not having a war chest that Republicans would normally have to run an effective election.”

Trump leveraged the power of 140 characters into hours of free television time as pundits debated the various comments the Republican posted on Twitter. Even if future candidates avoid tweeting at 3 a.m., Hail says they will be savvier and more invested in how they apply social media tools.

6. Careful with Those Emails
Clinton was dogged by persistent questions about her use of a private email server during her term as Secretary of State. Although her campaign downplayed the issue, the matter returned to dominate the news just 11 days before the election. That’s when FBI Director James Comey alerted Congress that his agents were investigating some 650,000 newly discovered emails.

That announcement had a significant negative impact on the Clinton campaign, says Cade and Cizmar. They contend the revelation shifted the public’s focus away from Trump’s “Access Hollywood” video controversy and revived lingering questions about Clinton’s integrity.

Lasley and Hail downplay the effect Comey’s letter had on Clinton’s prospects. Lasely says it was only one issue that slowed the Democrat’s momentum in the final weeks of the campaign. Hail says both candidates had such historically high unfavorable ratings, that both Clinton’s email controversy and Trump’s videotape scandal had a marginal effect on their respective campaigns.

7. Ch-Ch-Ch-Changes
What did matter, according to Lasley, is that this was a change election and that Clinton simply didn’t convince voters that she could be a bigger change agent than Trump would.

Clinton also faced the prospect of being a third term for President Barack Obama, says Cade. She says Clinton largely offered a continuation of the status quo and that was unacceptable to many voters. Instead Clinton needed to explain how her administration would differ from the past eight years of Obama.

Cizmar adds that the change argument is difficult to make for any candidate who’s of the same party as the president they hope to succeed.

Hail says Trump also appealed to nationalist values that many voters hold. He says the Republican’s promises to “make America great again” and defend working-class jobs had a powerful allure – even when that meant challenging traditional GOP interests.

“He was willing to take on big corporations in a way that challenges them to defend not putting America first,” Hail says.

Cade says the electoral system gets questioned every four years around presidential elections. Calls to eliminate the Electoral College may get quite vociferous, as they did following the hotly contested 2000 election, but Cade says the debate always fades away after a few months.

Cizmar says the electoral system makes vote counting easier, and it avoids having to create a federal agency to oversee a national election system. Lasley contends that even if the Electoral College was abolished in favor of a popular-vote count, there would still be concerns about the process.

9. Republicans Triumph in Kentucky
The professors cite Trump’s coattails as one factor helping Kentucky Republicans gain control of the state House of Representatives for the first time in nearly a century. The GOP now holds the governor’s office and majorities in both chambers of the legislature.

Cade says Trump’s popularity in the commonwealth helped foster down-ticket Republican wins last week. Hail says the GOP gains continue a long-term shift in the state’s electorate. He says that Republicans must now prove that they can govern and find ways to wisely create the change they’ve promised.

Lasley also attributes the state House victories to an extensive candidate recruitment effort by Republicans and to Gov. Matt Bevin’s work to campaign and fundraise for GOP House challengers. Lasley contends the House flip would’ve happened sooner had the party not lost seats during the Republican Administration of former Gov. Ernie Fletcher from 2003 – 2007.

10. Soul-searching for Democrats
Cade and Cizmar say the Democratic Party is in for a period of serious soul searching. Cade says Democrats need a new national chair and new blood to reinvigorate their party. Cizmar says she’s curious to see how the Kentucky party organization will respond to losing the last Democratically controlled legislative chamber in the South.

“It’s going to be a very big, uphill battle for Democrats in the state if it goes the way other deep South states have gone,” Cizmar warns. “Once they transitioned to Republican, in most areas they don’t look back.”

While demographics may ultimately favor Kentucky Democrats – the state’s fastest growing areas lean Democratic – Lasley says the party faces a long period of being in the minority.

“I don’t think there’s a place for the Democrats to go [in state politics] for a long time,” Lasley says. “They might be able to pick up an occasional statewide race… but it’s going to be 30 or 40 years in the wilderness.” 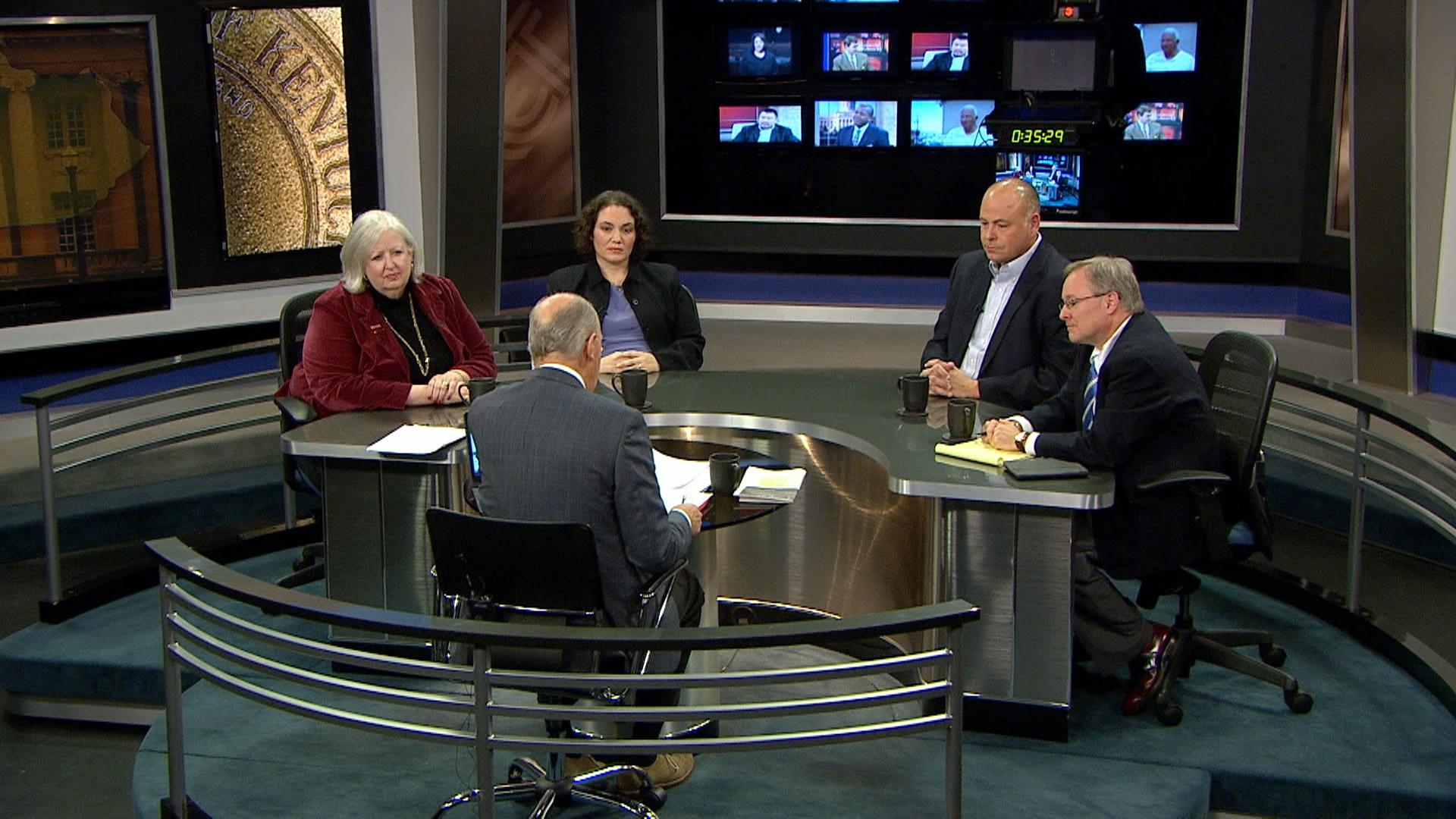