Historically, midterm elections have generally brought gains for the party that doesn’t control the White House.

But these days, historical precedent and conventional wisdom aren’t always the safest bets.

To make sense of what might happen in Tuesday’s midterm elections, KET’s Kentucky Tonight convened a panel of veteran political operatives to share their thoughts on the 6th District Congressional race as well as a number of state legislative races. The guests were Julia Bright Crigler, Republican political consultant; Jennifer Moore, former chair of the Kentucky Democratic Party; Ben Self, current chair of the Kentucky Democratic Party; and Tres Watson, communications director for the Republican Party of Kentucky. Here are five takeaways from their conversation.

1. Who Can Generate the Most Turnout?
Tres Watson says the results of Kentucky’s 6th District Congressional race will be closely watched nationally because the outcome could signal whether Democrats can regain control of the U.S. House of Representatives. A late New York Times poll puts the contest between Republican Congressman Andy Barr and Democratic challenger Amy McGrath in a dead heat at 44 percent for each candidate.

Watson says predicting Republican turnout has been tricky. On the one hand, he says the embattled nomination of Supreme Court Justice Brett Kavanaugh and a recent campaign appearance by President Donald Trump in Richmond helped fire up the local Republican base for Barr. But on the other hand, Watson says the strong economy might lead to complacency among the GOP faithful.

“They’ve got the policies they like in place, and when you’re happy with what’s going on, that doesn’t engender voter enthusiasm,” says Watson.

Meanwhile, McGrath has already bested Barr in fundraising, which has allowed her to open campaign offices in every county of the district, and mount an extensive get-out-the-vote effort that Ben Self says has enlisted hundreds of volunteers.

“I grew up in Lexington. I cannot can’t remember a single race that has had people as fired up and excited as this one,” says Self. “It’s a heavy Trump district… and the fact that Amy has made that district competitive could have an amazing ripple effect.”

The panelists say they’ll be watching to see whether McGrath or Barr can generate coattail benefits for their party’s candidates in state legislative races within the 6th district.

2. What Happens in the State House?
Since the 2016 elections, Republicans have dominated the state House of Representatives, holding 63 out of 100 seats. Democrats have vowed to return to power, but Jennifer Moore admits that will be a multi-year process.

“You’re going to see change happen tomorrow,” Moore predicts. “It’s going to be the first step in a long plan for the Democratic Party to take back the state House.”

Moore says the first step for Democrats is to gain at least four House seats, which would eliminate the GOP supermajority. Simply doing that, she says, would represent a huge win for Democrats and force Republicans to negotiate on legislation in the upcoming General Assembly session.

But even that modest gain won’t be easy for Democrats, according to Julia Crigler. She says Democratic incumbents face many of the most competitive House races this year. Plus, Republicans have a significant fundraising advantage, giving them more resources to buy media advertising and deliver direct-mail pieces. Still, Crigler says the GOP is not taking any legislative races for granted.

“I don’t think there’s any assumptions in this environment that can be made that any districts are safe,” she says. “It’s a very challenging environment for Republicans, there’s no doubt about that.”

Self says he expects some 30 House races to be closely contested in districts all across the commonwealth. He says that’s forced the GOP to be selective where it puts its money. But where Republicans are investing, Self says the dollars are substantial.

Watson says current state House districts were drawn by Democrats to benefit Democratic candidates. He contends Republicans will hold the majority until at least 2022, when they will be able to redraw the districts and, as he says, make them fairer.

3. What About All Those Angry Teachers?
Educators held several mass rallies earlier this year to protest public school funding and pension reform legislation. Their pledge to “remember in November” was meant to serve as a warning to the Republican majorities in the state House and Senate.

Watson says Republicans listened to those concerns and not only amended the pension bill but also fully funded the public employee and teacher retirement plans for the first time in years. He says it was only a few “squeaky wheels” that were the most vocal critics of what Republican leaders wanted to accomplish.

“The educators who have educated themselves on what was passed have largely settled down and a lot of them are supporting it,” says Watson.

But Moore contends the anger hasn’t completely subsided. She points to how Republicans also cut funding for some school programs, voted to allow charter schools, and tried to shift new teacher hires into a hybrid cash-balance retirement plan instead of the traditional pension plan.

Crigler says she thinks making the pension reform battle a campaign issue is a risky strategy for Democrats.

“While trying to point the finger at Republicans, Democrats have also exposed themselves for the last decade of underfunding pensions consistently under their majority leadership,” says Crigler.

Watson says Mills was a popular member of the Henderson City Council. Mills was recruited to run against Ridley, who Watson says hasn’t had a GOP challenger in more than a decade. He also says the district is trending more conservative and should be a good pick-up for Republicans.

In Fayette County’s Senate District 12, incumbent Republican Alice Forgy Kerr faces Democrat Paula Setser-Kissick, one of the many educators to seek office this year. Crigler says Kerr should win re-election, but she says the margin of victory could be affected by turnout in the Barr-McGrath Congressional race.

In Senate District 28, which includes Clark and Montgomery Counties as well as part of Fayette County, Republican physician Ralph Alvarado is seeking his second term in office. Watson says Alvarado, a physician, has raised $300,000 for his campaign and should easily win re-election.

The Democratic challenger is another school teacher, Denise Gray. Moore says the GOP must fear Gray based on the attacks they’ve leveled against her. She says Gray has made public education the top issue in her campaign. Self says the 28th is a district where Democrats may be able to make gains among suburban women who would have otherwise voted Republican.

5. State House Races to Watch
Jody Richards is among several prominent Democratic lawmakers who announced their retirements this year. Richards, a former state House Speaker, has represented Warren County since 1976. The candidates vying to replace him in House District 20 are Democrat Patti Minter and Republican Ben Lawson.

Moore says Minter, a history professor at Western Kentucky University and a political newcomer, won a five-way Democratic primary with 43 percent of the vote. Crigler says Lawson, an insurance salesman, is more in line with traditional Warren County voters.

The open seat in House District 61, which includes Grant County as well as parts of Boone, Kenton, and Scott Counties, features Republican Savannah Maddox and former Grant County Judge-Executive Darrell Link, a Democrat. At issue in this race is a radio spot that Crigler says attacks Maddox for being a stay-at-home mom.

Although they had not heard the commercial, Self and Moore denounce the advertisement, which Crigler says was paid for by the Grant County Democratic Party.

But Moffett also angered some of his fellow Republicans when he called for the expulsion of Rep. Jeff Hoover (R-Jamestown) earlier this year after allegations of sexual misconduct arose against the House Speaker in 2017.

Moore calls the 32nd a swing district. She says the Democrat in the race, special education teacher and gymnastics coach Tina Bojanowski, is the best opportunity for Democrats to pick up a House seat in Jefferson County. 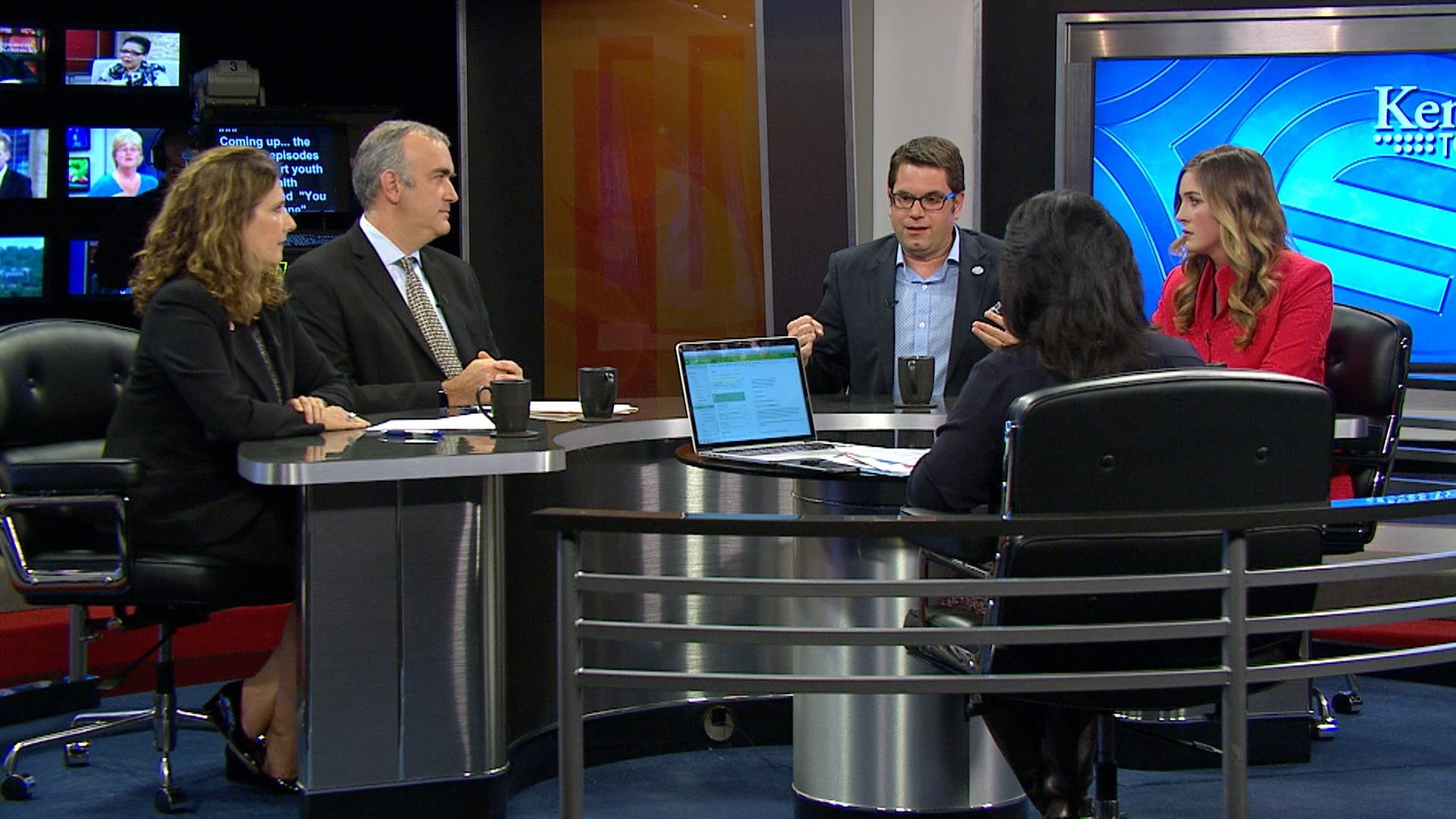