The images have been shocking: Migrant men, women, and children packed into detention facilities for days and weeks, many without ready access to showers and other personal hygiene resources. Then there was the photo of the drowned Salvadoran father and his young daughter, their lifeless bodies floating in the Rio Grande River where they attempted to cross into Texas.

The Roots of the Crisis
Few people debate that there is a crisis on the southern border, but there is disagreement on the exact nature of that crisis.

“I believe that it’s a humanitarian crisis,” says Rep. Nima Kulkarni. “I think this is one largely of our own making because what we’ve done is ignored the asylum laws that we had in place in this country.”

Kulkarni says children have been separated from their families and are being housed in facilities not designed for long-term detention. She contends the crisis is the result of inadequate policies by the Trump Administration that are being pursued without thought to historical precedents and future ramifications.

Garrard County Attorney Mark Metcalf agrees there are humanitarian concerns as well as problems with the asylum process, which he contends results from immigrants who have been released from detention but then fail to appear in court to have their asylum cases heard.

Those processes are complicated by the interactions of multiple government entities, according to immigration attorney Duffy Trager. There’s Customs and Border Protection (CBP) as well as Immigrations and Customs Enforcement (ICE), which are agencies of the U.S. Department of Homeland Security. Trager says CBP is only supposed to detain immigrants for 72 hours before turning them over to ICE. But ICE only has about 45,000 beds to hold people, which the current flow of immigrants has far exceeded. Meanwhile, the U.S. Department of Health and Human Services is supposed to place unaccompanied alien children with adult family members living in the U.S.

“From a moral standpoint, if we’re going to detain these people, under what conditions do we do it?” says Trager. “Now, is the [Trump] administration creating some of these issues? Absolutely. Their vigorous detention policy is part of the issue.”

“We don’t have the resources assigned to deal with that number of people claiming political asylum,” says Goettl. “I don’t believe it’s a crisis necessarily of our own making. I think there’s a humanitarian crisis in these third-world countries, in Honduras and Guatemala. That’s why their citizens are leaving.”

’Gaming’ the Asylum System
Not everyone seeking asylum in the U.S. has to do so on a political basis. Applicants can also have a credible fear of death or persecution if they stay in their native lands. Kulkarni says this can include being forced into gang membership or sold into sex trafficking. Through conversations with the immigrant, an asylum officer determines whether the applicant faces a credible threat; if so, the person is referred to an immigration court to continue the asylum process.

But Kulkarni says these credible-fear interviews are not occurring like they should. She claims asylum-seekers arriving at the border are being detained or even sent back across the border without getting the required interview.

“So when you hear this talk about ‘go through the process, do it the right way,’ we have shut that system down entirely,” says Kulkarni.

In locales where those interviews are still conducted, border agents are doing fewer of them, sometimes as few as one or two a day, according to Trager. He says this “metering” of interviews is contributing to the backlog of immigrants.

“I think the whole metering process is built to slow the process down,” says Trager. “It’s to make it harder to request asylum.”

But Goettl and Metcalf say metering helps ensures a thorough asylum process. They say it also discourages immigrants who don’t have a legitimate asylum request from bothering to come to the U.S. Goettl says migrants shouldn’t complain about the process, even if they have to wait a while for their credible-fear interview.

“The fact that they have to wait 30 days or 45 days is not a travesty in terms of what they’ve been through, what they’ve lived through, and what they’re waiting to get into,” says Goettl.

Another issue, according to Metcalf, is that immigrants trying to enter the country can “game the system” by bringing children with them and claiming to be their parent or relative. Metcalf says a recent DHS survey of an immigrant test population found that 15 percent of the children didn’t belong with the people that claimed to be their parents. He says those people who use children in this way should face felony charges for fraud.

Metcalf admits the U.S. does need more asylum officers, who he says are highly trained in the languages and issues of the regions from which asylum applicants come. But he says even with the metering of interviews, many asylum-seekers are released from detention.

“It’s unfair to say that a lot of these don’t pass muster,” says Metcalf. “We’ve released 160,000 people over the last three months into the U.S. and given them court dates and told them when to appear.”

Mass Deportations
In June, President Trump threatened to deport “millions” of immigrants who are in the U.S. illegally. According to news reports, the administration wants to focus on those who have failed to appear for their immigration court hearings and have outstanding deportation orders against them. A few days later, Trump delayed the raids to give Congress time to negotiate a deal on immigration policy.

This past weekend, administration officials said a plan to round up and deport at least a million migrants would begin soon.

Rates of migrants who fail to attend their court hearings vary widely, depending on whom you ask. Metcalf says 87.5 percent of immigrants released from detention are no-shows. But Trager says 83 percent of people in asylum proceedings appear for their court dates, according to the American Immigration Council.

The process is not easy, even for those migrants who want to appear in court.

“It’s a very, honestly, byzantine system,” says Trager. “When you’re released from custody and placed into removal proceedings, you’re given a notice to appear. That notice to appear may not have an immigration court date or time or place on it.”

Kulkarni says the million people the Trump Administration wants to deport likely includes people who have lived in the U.S. for decades, working, paying taxes, and raising families. Even though they may have failed to appear in court at some point, she says they may have options available to them that would prevent them from being deported.

Metcalf says the deportation process does include several due-process options for the migrant, including a review by the Board of Immigration Appeals within the Department of Justice.

Regardless of the appeals options, Goettl says its useless to have immigration laws and deportation orders if they are not going to be enforced.

“If there are over a million who have been ordered to be removed and nobody has done anything about it, it makes a mockery of that system,” says Goettl. “What’s the point of having courts and doing this stuff?”

What Could Immigration Reform Look Like?
It’s been years since Washington has enacted a comprehensive overhaul of federal immigration policies. Although Democrats and Republicans can seem miles apart on the issue, there are areas where the two sides can agree. Kulkarni says nobody wants open borders, and everybody wants an immigration system that works for the needs of the nation.

“It’s been restricted and expanded over the entire course of our country, not based on what our economy needs, what our employers need, what our families need. It’s based on what country you come from,” says Kulkarni. “It’s not talking about how we will progress as a country, how we will harness immigration to make our country better and more secure in the future.”

Kulkarni says she wants a system that provides a secure border and a pathway to citizenship for undocumented people already living in the U.S. Trager says he envisions a plan like the one proposed in 2013 by a bipartisan group of senators known as the “Gang of Eight.”

“It created a pathway to get naturalization for the 11 to 12 million undocumented people that are here,” says Trager. “It had the security parameters, it had the low-skilled, highly-skilled increases for those [work] visas as well.”

Trager says he would also like to see a process for migrants who did enter the country illegally to correct their status and be allowed a path to citizenship.

Goettl says he would require illegal migrants to pay a fine of up to $10,000 and then get in line to wait their turn for citizenship. He also wants strong border security coupled with a means-based immigration policy.

“I would look at bringing in the best and the brightest from the world,” says Goettl. “The one criteria I’d want to add is I would want them to want to be U.S. citizens. I wouldn’t want them to immigrate here on green cards, absorb our knowledge, and then take it back, and use it against this country at some point [in] the future.”

Metcalf also wants immigration policy to focus on the skills and merits of the migrant, not the family connections that the person may have. Whether the nation enacts new immigration and border security policies or maintains existing ones, he says the rules must be enforced.

“When we harden the border, when we use the means that have historically been used to let in those who are truly asylees and reject the rest, we start getting rule-of-law solutions that work,” he says.

Both Metcalf and Goettl say they support including a citizenship question on the 2020 census. They say it’s vital to get an accurate count of who is and is not an American citizen so that Congressional seats and federal dollars can be fairly allocated. Trager is opposed to the question and says the U.S. Supreme Court has already decided the matter. Kulkarni says there is no good reason to include the citizenship question. She says doing so will result in an inaccurate count because many families will decline to respond. 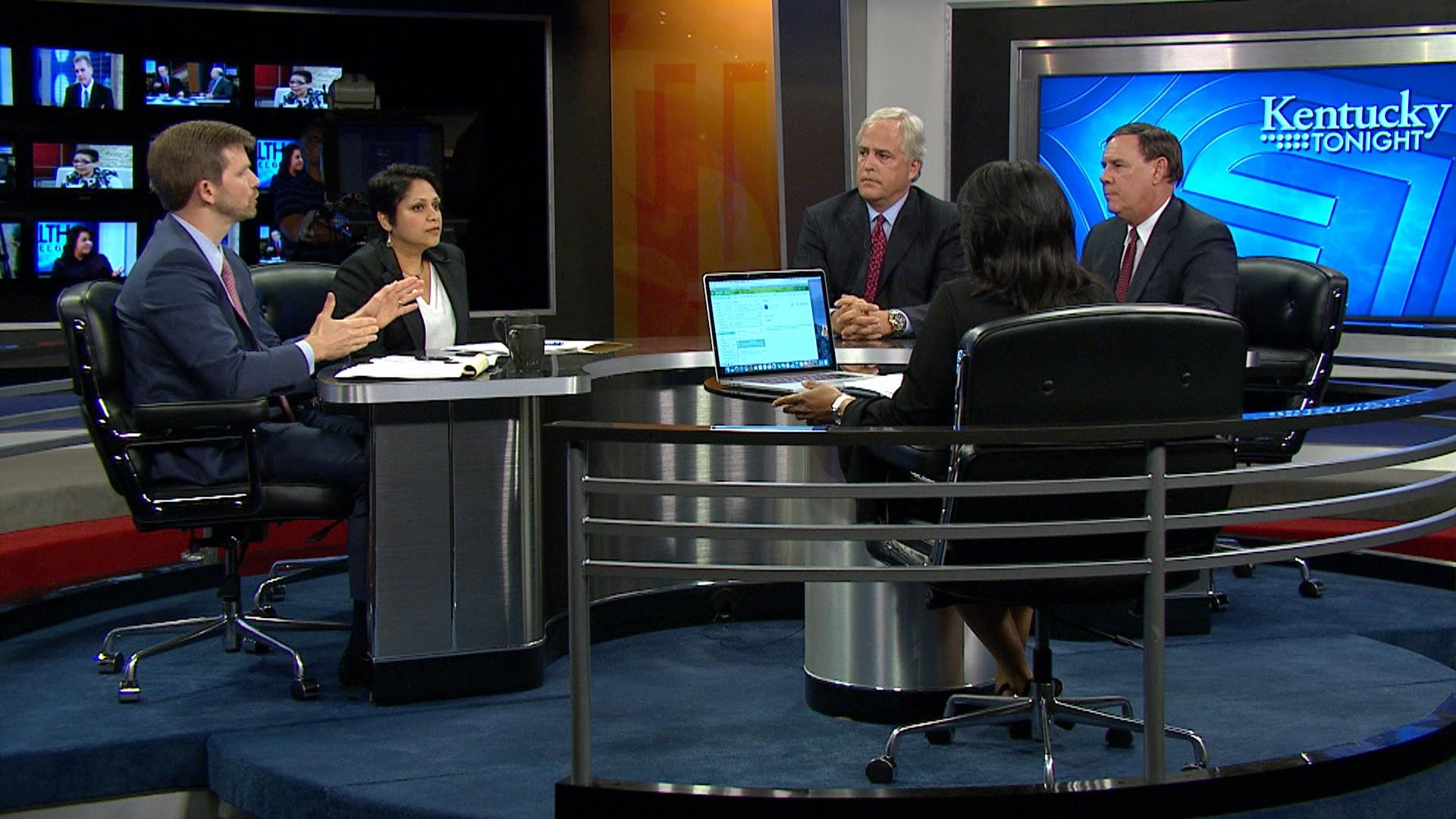