The Trump administration’s family separation policy sparked a new round of intense debate about immigration reform in America. Before President Donald Trump suspended the policy last month, more than 2,000 children had been separated from their parents or other adults that accompanied them as they attempted to cross the Mexican border into the United States.

The Role of Immigration Policy
From border walls to travel bans to Dreamers, immigration remains a divisive topic in Washington. But as Republicans and Democrats struggle to find some consensus, there appears to be one point on which both sides can agree: The current system is flawed.

But how you approach reforming immigration depends on your point of view.

“Immigration should be serving the host nation… to bring in the right skills, people with good backgrounds, people who are educated, people who are going to add to our economic might,” says Garrard County Attorney Mark Metcalf. “There’s also room for the unskilled, and we have lots of unskilled that we’ve been bringing in for several decades.”

Metcalf served a little more than two years as an immigration court judge in Miami during the George W. Bush Administration. He says the U.S. accepts more new citizens than all other nations combined. But he contends the number of illegal immigrants has skyrocketed in recent years because of lax enforcement, especially during the term of President Barack Obama. Metcalf also says many illegal immigrants who are released prior to their court date fail to appear in court and are never seen again.

Emily Jones of Kentucky Refugee Ministries disagrees with Metcalf on the issue of which immigrants should get preference.

“I believe that we were founded as the United States of America as a refuge for those who are being persecuted in the world and that it’s our duty to offer protection to those who need it most,” says Jones. “Merit-based immigration doesn’t necessarily respect the dignity of people and it’s a much less humane way to look at immigration.”

Jones contends that immigrants and refugees contribute to the domestic economy and don’t substantially increase crime. Dan Rose of Americans First counters that illegal immigrants are filling the nation’s jails, driving down wages, and costing taxpayers billions of dollars in enforcement, judicial, and social service costs. He says lax immigration policies have contributed to the spread of terrorism to the United States.

“We wouldn’t have had 9/11… had we been more careful about who we let into our country,” Rose says. “It’s the worst attack on the continent that’s ever occurred and it’s all because we weren’t paying attention to who we were letting into our country, so I think everyone needs to be concerned about it.”

“Our immigration system is not one where we’re sleeping on the job and no one is paying any attention to who’s coming across our borders,” says immigration attorney Nima Kulkarni. “We have an extremely restrictionist immigration system. It has been so basically since the 1790s.”

Kulkarni, who is a Democratic candidate for the state House of Representatives, says immigrants perform jobs native-born Americans won’t do and they pay taxes, whether they are here legally or illegally. She argues that the recent furor over the separation of migrant families has galvanized public opinion around changing what she calls unjust and irrational immigration policies.

Zero Tolerance and Family Separation
The family separation practice was part of a “zero-tolerance” policy the Trump administration adopted in April. It calls for criminal prosecution of anyone who illegally crosses the border into the U.S.

After a bipartisan outcry over the separation and detention of children ranging from babies to teenagers, the president signed an executive order on June 20 to suspend the practice. Instead, the order directed families to be detained together.

Rose says the policy to remove immigrant children from the adults who accompanied them was in the best interest of the young people.

“The president’s policies have actually, if you look at the facts, operated to protect many of these children from being exploited,” he says.

Rose cites U.S. Department of Justice figures released last week reporting that out of 103 migrant children, 57 under the age of 5 had been reunited with their families. But 45 youth were determined to be ineligible for reunification because the adults they were traveling with were either not their parents or deemed to pose a safety concern or had committed serious crimes.

That still leaves the fates of hundreds of children in question. A federal judge ordered all the separated families be reunited within 30 days. The courts also called for a delay in deporting families once they had been restored.

But in some instances, according to Jones, the adult family members have already been deported, leaving the children held in the U.S. to fend for themselves.

“So now we have created unaccompanied children who are expected to represent their own interests in court without the assistance of an attorney,” Jones says. “Our government did that.”

Kulkarni says federal officials must be more transparent about the futures of all the children that have been detained.

Smuggling of children is also an issue, according to Metcalf. He says some families will actually pay gangs or so-called “coyotes” to transport their kids and drop them at the border.

“Then they were placed into [immigration court] proceedings and the statement was, ‘Judge, this child should be granted refugee status, should be placed on a path to citizenship because they’ve been smuggled,"” Metcalf says, “It was their family who paid for them to be smuggled.”

Conflicts over ICE
The family separation policy has also caused some Democrats to question the role of Immigration and Customs Enforcement, (ICE), the division of the U.S. Department of Homeland Security that controls the nation’s borders and enforces trade and immigration policies.

Kulkarni says much of the criticism of ICE centers on the Trump administration’s zero-tolerance policy in immigration.

“As it stands, [ICE] should be abolished,” Kulkarni says. “There is no room for enforcement-only. We are rounding up people that we’re not even sure are citizens or not without attaching due process. This is not who we are as a country.”

ICE used to prioritize their enforcement efforts on three groups: convicted felons, gang members, or those who pose a national security threat; those convicted of serious or multiple misdemeanors, who abused their visas, or who illegally entered the U.S. in the past four years; and lastly those facing a deportation order. Kulkarni says such prioritizing is necessary because the government doesn’t allocate enough resources to capturing all illegal migrants.

Metcalf says this “interior enforcement strategy” dates back to the Clinton and George W. Bush Administrations. He says President Obama significantly weakened the strategy, which resulted in hundreds of thousands of illegal migrants being allowed to stay in America, many of whom have a history of violent crime.

“Releasing people into U.S. who are convicted felons is government by malpractice, and it was the wrong thing to do,” says Metcalf.

The Trump administration’s move to abandon enforcement priorities in favor of a zero-tolerance strategy against illegals has its own problems, according to Jones. She’s concerned that ICE officers are conducting large-scale round-ups of people simply based on racial profiling, detaining them, and then forcing them to prove their immigration status. Jones says there are much cheaper alternatives to mass incarceration of undocumented migrants, such as ankle bracelets that track the locations of immigrants. She is also worried that immigration judges will soon face a new requirement to process at least 700 cases a year.

“Typically there’s this idea of judicial independence and that judges are going to be able to do what they can to ensure that they hear all the sides of the case and that they’re able to make an informed decision based on all of the evidence in front of them and the law,” Jones says. “Where judges’ raises and job security are tied to numbers, it’s really hard to imagine that these judges are going to be able to actually be impartial and to have the wherewithal to get through this amount of work fairly and justly.”

For his part, Rose says it’s ironic that Democrats criticize ICE for doing what’s in its name: enforcing immigration policy.

“The chairman of their party now wants to abolish ICE… and basically let anybody pour into our country with no accountability whatsoever,” Rose says. “ICE is the only thing standing between us and complete chaos and anarchy involving immigration and illegal immigration,” Rose says. 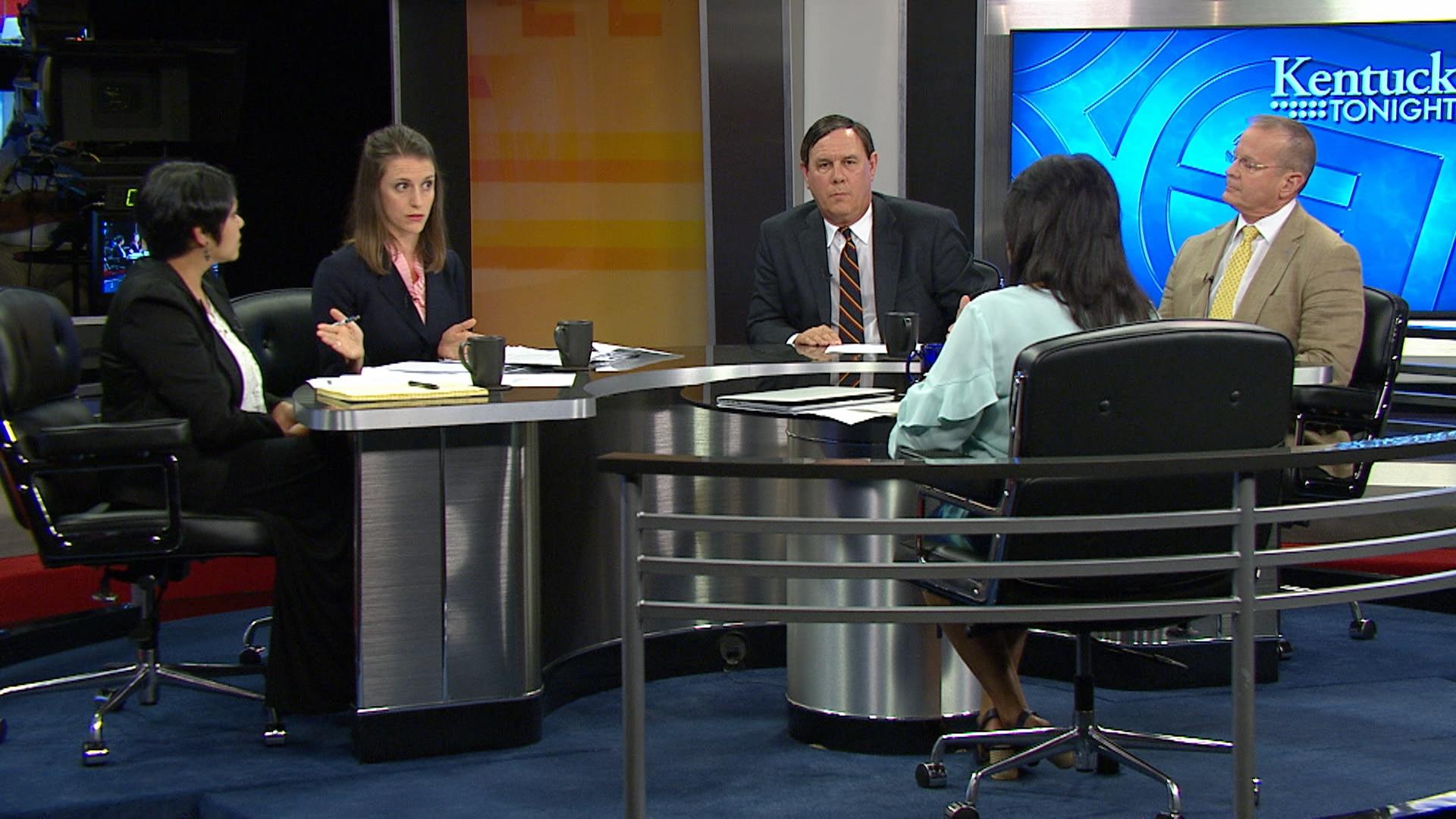