In the aggregate, data show that the American economy has made significant strides in recovering from the depths of the Great Recession.

Kentucky as a whole has shared in those gains, but whether specific individuals have benefited largely depends on where they live in the commonwealth and the type of work they do.

KET’s Kentucky Tonight reviewed the state’s economic outlook and the latest trends in jobs and wages. The guests were Anna Baumann, research and policy associate at the Kentucky Center for Economic Policy; Julia Crigler, state director of Americans for Prosperity; Trey Grayson, president and CEO of the Northern Kentucky Chamber of Commerce; and Bill Londrigan, president of the Kentucky State AFL-CIO.

State’s Economy a ‘Mixed Bag’
The good news is that some 47,000 more people are employed in the state now than when the recession started and Kentuckians across the board have experienced real wage growth for the first time in 15 years, according to a report by the Kentucky Center for Economic Policy. The state’s unemployment rate has been at pre-recession levels for eight months now, and preliminary figures for August show that joblessness in the commonwealth dipped just below 5 percent.

But when you drill down into those numbers, a very different picture begins to emerge.

Bill Londrigan describes the job market as a “mixed bag.” He notes about half of the new jobs created in the state were in the service and temporary worker sectors, which he says pay average weekly wages of about $290. Londrigan says that’s resulting in more poverty and lower standards of living for many Kentuckians.

The state’s job growth has also occurred across a fairly limited area. Anna Baumann says only 25 Kentucky counties have more people employed now than they did in 2007 before the recession. Most of those counties are in the so-called Golden Triangle region between Louisville, Lexington, and northern Kentucky. The remaining 95 counties have fewer people employed now than they did nine years ago. Baumann adds that the hardest hit people tend to be younger and minority workers and those with less education.

To illustrate the uneven nature of the recovery, Trey Grayson says the northern Kentucky counties south of Cincinnati have unemployment rates of around 3 percent and employers there are “dying for more workers.” He says business is very strong for those in advanced manufacturing, logistics, health care, construction, and financial services. In contrast, Magoffin County in eastern Kentucky has an unemployment rate of about 16 percent.

That geographic disparity should inspire lawmakers to consider changes to the business climate in the commonwealth, says Julia Crigler.

“I think if you ask the average rural Kentucky family, they’re still very much struggling to make ends meet,” Crigler says. “We need to look at our policies as a state and really reevaluate what we can do to put ourselves in a better position to compete not just in this region but in this global economy.”

Another troubling statistic, says Crigler, is the decline in the labor force participation rate, which measures the number of people either employed or actively seeking work. She says there are many Kentuckians who have simply left the job market for various reasons.

Right to Work and Union Membership
For several years Republican lawmakers and business leaders have pushed right-to-work legislation as a key way to boost Kentucky’s economy. Such a law would free employees from the mandate that they join or pay fees to a union that operates at their place of work. Indiana, Tennessee, and West Virginia are among the 26 states that are designated as right to work.

Grayson says Kentucky does have good labor-management relations in its unionized companies, but he contends the state still loses as much as two-thirds of business location and expansion opportunities because the commonwealth lacks the right-to-work status. He says right to work gives economic development officials another tool to lure jobs to the state. Plus Grayson argues that right to work is not anti-union even though opponents often portray it that way.

“The irony is that Indiana and Tennessee are both seeing higher union job growth because [right to work] is lifting the economy,” says Grayson. “Existing union-organized facilities are growing because the overall economy is growing.”

When looking nationally at right to work states, Baumann says the designation doesn’t create more jobs and it depresses wages for all workers, both union and non-union. She argues that right to work leads to less union bargaining on behalf of workers.

Only about 11 percent of the state’s workforce is unionized, according to Londrigan, so he says right to work is overrated as an economic development issue for the commonwealth. He says out of 25 factors that companies consider when locating a business, right to work ranks 21st among their concerns.

Minimum Wage and Overtime Pay
Another ongoing battle in the state legislature is whether to increase the minimum wage in Kentucky, which is an idea that’s been promoted by Democratic leaders and labor activists. Baumann says modest increases to the minimum don’t create job losses, and Londrigan contends boosting worker pay has far-reaching positive impacts.

“This is a consumer-based economy,” Londrigan says. “The more money that workers and families get to spend, the better off our economy is, the more things that we make, the more people we can employ.”

Americans for Prosperity opposes raising the minimum wage because they contend it would hurt workers and the economy.

“Any type of artificially inflated, government-mandated minimum wage is never going to be the path to prosperity, especially in a state like Kentucky,” Crigler says.

Officials in Louisville and Lexington have already enacted minimum wage hikes in those cities. Grayson argues that thriving urban areas are better positioned to handle such pay increases, whereas struggling rural communities would have difficulty sustaining a higher wage. He says it should be left to each individual market to determine what the wage equilibrium should be.

Some workers do stand to earn more money when a new federal overtime rule covering salaried, white-collar employees takes effect later this year. Now employees making less than $23,660 a year qualify for time-and-a-half pay when they work more than 40 hours a week. As of December 1, workers earning $47,476 or less will be eligible for overtime. Gov. Matt Bevin has joined leaders from 20 other states in a lawsuit challenging the increase.

Crigler says the new rule will force professionals to punch a time clock and cost them flexibility at their jobs. Grayson says the change will also create a hardship for small businesses and nonprofit organizations that may not be able to pay more wages or handle the additional bookkeeping needed to track overtime pay.

One in four salaried workers in Kentucky will be now be entitled to receive overtime under the rule, according to Baumann. She says businesses can choose to either pay employees for the hours they actually work, or limit their job duties to 40 hours a week, giving those individuals more time to spend on other activities.

“The modern economy is struggling with a lack of aggregate demand,” Baumann says. “Workers are being paid too little, they don’t have enough money to maintain a certain quality of life or even meet basic needs, so putting more money in workers’ pockets [or] giving them a better work-family balance are good things.”

Job Training and Trade Policy
The state recently launched a Work Ready Skills Initiative to improve workforce training opportunities around the commonwealth. Some $100 million in grants will be awarded to public-private partnerships between educational institutions and private-sector employers that create training programs designed to prepare workers to fill specific employment needs in their communities.

In the past, Grayson says civic leaders and public officials placed too much emphasis on a college education as being the only path to good-paying jobs. He says this new initiative has the potential to create many new career-track employment opportunities for people who don’t aspire to a four-year degree.

“Not every kid needs to go to UK or U of L,” Grayson says. “It’s unfortunate that we spent too many years communicating the wrong message to people.”

Grayson adds that such training programs can prepare people to work in higher-tech advanced manufacturing jobs that comprise a growing part of the Kentucky economy and that he says are better insulated from being outsourced. He says trade agreements that are being so hotly debated in this year’s presidential campaign have actually benefited the commonwealth. Grayson notes that Kentucky is a top-10 state in terms of exports.

But like the rest of the economic recovery, trade policies have been a mixed blessing for the state, says Londrigan, especially for those doing more traditional, lower-skilled factory work.

“Since 2000 we’ve lost one-quarter of our manufacturing jobs in the state of Kentucky due to foreign outsourcing [and] due to unfair trade agreements,” Londrigan says. 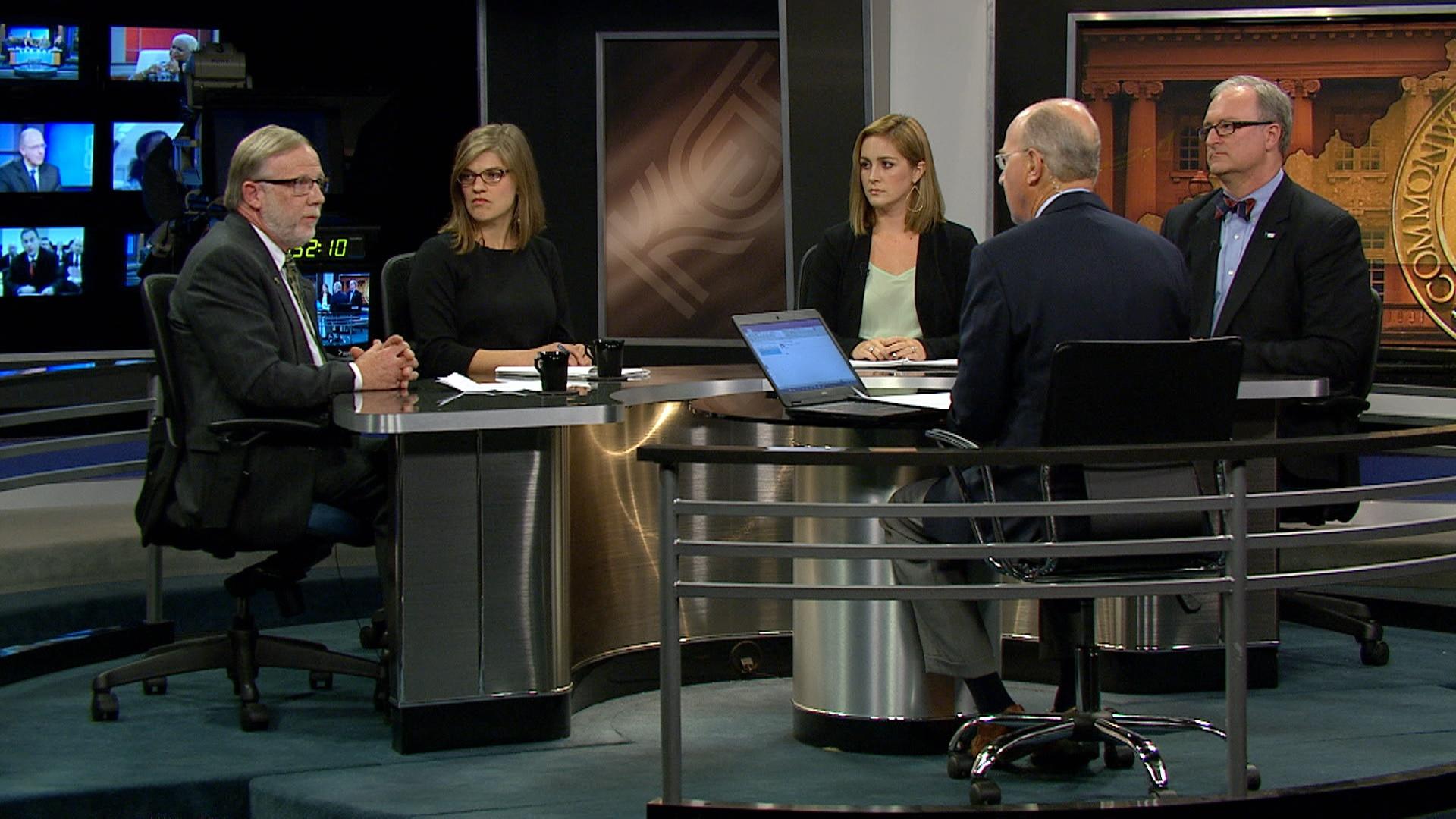