K-12 Education in the General Assembly

In the 2016 legislative session, the Kentucky Senate passed a sweeping overhaul of public education, largely along party lines. Senate Bill 1 sought to better align what students are tested on with what teachers are required to teach. It also contained provisions to change school accountability, teacher evaluations, academic program reviews, and other administrative functions.

That legislation died in the education committee of the then-Democratically controlled House.

As the old maxim says, if at first you don’t succeed, try, try again.

A revised SB 1 that seeks to address many of the same issues is back for the 2017 session. Now that Republicans control both legislative chambers, the prospects for the measure would appear to have improved.

Four lawmakers appeared on KET’s Kentucky Tonight to discuss aspects of the bill and share their thoughts on the charter schools. The guests were Sen. Mike Wilson, chair of the Senate Education Committee and sponsor of SB 1; Sen. Gerald Neal (D-Louisville), a member of that committee; Rep. John Carney (R-Campbellsville), chair of the House Education Committee, and Rep. Wilson Stone (D-Scottsville), House Minority Whip.

Part of the impetus for SB 1 is to help the commonwealth implement the federal Every Student Succeeds Act (ESSA), which former President Barack Obama signed into law in late 2015. Wilson says ESSA replaced No Child Left Behind and shifted more decision-making authority from the U.S. Department of Education back to states and local school districts.

Sen. Wilson’s SB 1 establishes a framework for dealing with a range of issues in this new regulatory environment from curricula and testing, to teacher evaluations and academic program reviews. A primary function of the bill, says Wilson, is to better align academic standards with assessments.

Academic standards mandate that students be able to do certain things and perform at a certain level depending on their grade. But Wilson says the assessments given those students have often tested for different capabilities, forcing educators to decide whether to use their limited class time to teach to the standard or teach to the test on which student and school performance would be judged.

The 104 pages of SB 1 also contain provisions to reduce administrative paperwork required of teachers, update how school performance is measured, allow under-performing school districts to develop their own turnaround plans, and give districts more flexibility to innovate. The legislation also eliminates the Common Core Standards that have been opposed by Gov. Matt Bevin and other Republicans.

Reviewing Academic Standards
Wilson’s efforts over the past two years to solicit input from educators and craft the legislation have drawn bipartisan praise, but SB 1 does have its detractors. Rep. Stone questions how SB 1 changes the method for reviewing creative and performing arts programs. Sen. Neal says he opposes the repeal of Common Core and he fears that decentralizing too much authority over school evaluations may lead to uneven student outcomes. He also worries that the legislation could allow political interference in establishing academic standards.

SB 1 would create a multi-level process for developing new academic standards. Four subject areas — language arts and writing, math, science, and social studies — will have committees to develop standards and assessments. The committees will be comprised of public school teachers and representatives from a state college or university who have expertise in the subject area for that committee.

The academic standards those committees recommend then go before a Standards Assessment Recommendation Committee. It’s composed of three gubernatorial appointees, three state Senators selected by the Senate President, three state House members chosen by the Speaker of the House, and the state education commissioner.

Wilson says the recommendation committee’s only job is to ensure that the development process was properly followed and transparent, and that the recommended standards receive public input.

Carney, who has been an educator for 20 years, says he approves of the oversight function defined for the recommendation committee. “I do think we should purely be in a role that simply made sure that all the process was followed,” Carney says. “I don’t think at that point we really have any role necessarily in trying to say what the standards were.”

But Neal worries that bringing the executive and legislative branches of government into the standards development process could be problematic. He contends that if the policies are well written, there should be no need for oversight by lawmakers. “Now we’ve inserted ourselves to micromanage whether or not they’re carrying out this function properly,” Neal says. “That’s, at least from my particular standpoint, a departure from how we generally do business.”

Testing and College and Career Readiness
The federal Every Student Succeeds Act seeks to reduce the number of tests students must take, according to Wilson. SB 1 would also limit the days students spend taking tests and other assessments.

Under SB 1, Wilson says Kentucky educators will still be able to accurately gauge individual student growth and compare those results against the scores other students around the nation. Wilson says one such provision has the state paying for all students to take the ACT or similar college entrance exam twice: at the beginning of the 10th grade and at the end of the 11th grade.

“Students, when they know that this test makes a difference, they really try hard,” Wilson says. “You can see the difference in the test, how they do on the initial one and how they do on the [second] one, and so you’ll still be able to compare our schools nationally based on those tests.”

Although the ACT has a long track record with educators and students, Carney, Neal, and Stone worry that it alone may not be the best gauge of a student’s progress and capabilities. Carney and Neal call the ACT a “snapshot” test that’s unfair to students. Carney argues that children deserve a more holistic assessment of their abilities. Stone says there may be better ways to assess whether a high school student is ready for college or a career.

“There are some students who never get very good at the standardized test,” says Stone. “But when they find their niche, they soar, whether that’s in the technology areas or whether it’s in the advanced manufacturing kind of areas.”

Since test scores indicate that a third of Kentucky high school graduates are not college or career ready, Wilson says it may be valuable to include other performance criteria that may better reflect a student’s preparation for adult life. He says such measures could include whether the student takes dual-credit courses, earns a certification in a specialized skill, or completes an apprenticeship.

The Charter School Debate
At least two bills to create public charter schools await lawmakers when they return to Frankfort on Feb. 7.

House Bill 103, sponsored by Reps. Phil Moffett (R-Louisville) and C. Wesley Morgan (R-Richmond) would enable any Kentucky community to form ongoing charter schools. The operations could be authorized by local school districts, the mayors of Louisville or Lexington, the trustees of a four-year college or university, or the Council on Postsecondary Education. HB 103 would also end the current Kentucky Districts of Innovation program but allow districts to create “opportunity” schools that can employ more creative instructional practices.

Sen. Neal’s Senate Bill 70 takes a more focused approach. It would allow for charter school pilot projects in Jefferson County and potentially Fayette County. Up to two schools could be chartered each academic year between 2018 and 2022, and only local school boards would have the authority to grant a charter. Neal says he wants to create a framework for accountability, transparency, and governance in charter operations.

“What I’m trying to do with this particular legislation is to lay a benchmark on the table for discussion,” says Neal. “So the discussion really isn’t whether you’re for or against [charter schools] because the bottom line is what’s being delivered for these kids, what’s going to enable them to compete and become contributing and productive citizens.”

Neal’s bill is similar to legislation that Sen. Wilson proposed last year, except his measure also allowed the governor to create a commission to authorize charter schools. Wilson says allowing only a local district to grant charters may stifle the creation of the new schools, since local officials may not want a charter operation competing with their traditional schools. The senator says charter schools could help close achievement gaps that persist between white and black students, especially in urban schools.

“I’ve never said charter schools are the answer for everything, I just said it’s a tool in the toolbox,” Wilson says.

From his own classroom experience, Rep. Carney says many students need an alternative way of learning that charters could provide.

“I believe that public schools will always be the main source of education delivery in the commonwealth,” Carney says. “But also I’ve come to believe, though, that we need to look at options for other students.”

Carney supports starting with pilot [charter] schools as Neal’s bill prescribes, but he wants to enable any community in the commonwealth to have a charter (instead of initially limiting them to Louisville or Lexington).

Charter schools are coming to Kentucky, says Rep. Stone, but he contends accountability is crucial. The Democrat says he doesn’t want any child to be trapped in a failing school. He argues that the state should provide whatever educational opportunity a child needs to succeed, but he doesn’t want that to happen at the expense of gains made in traditional classrooms in recent years. 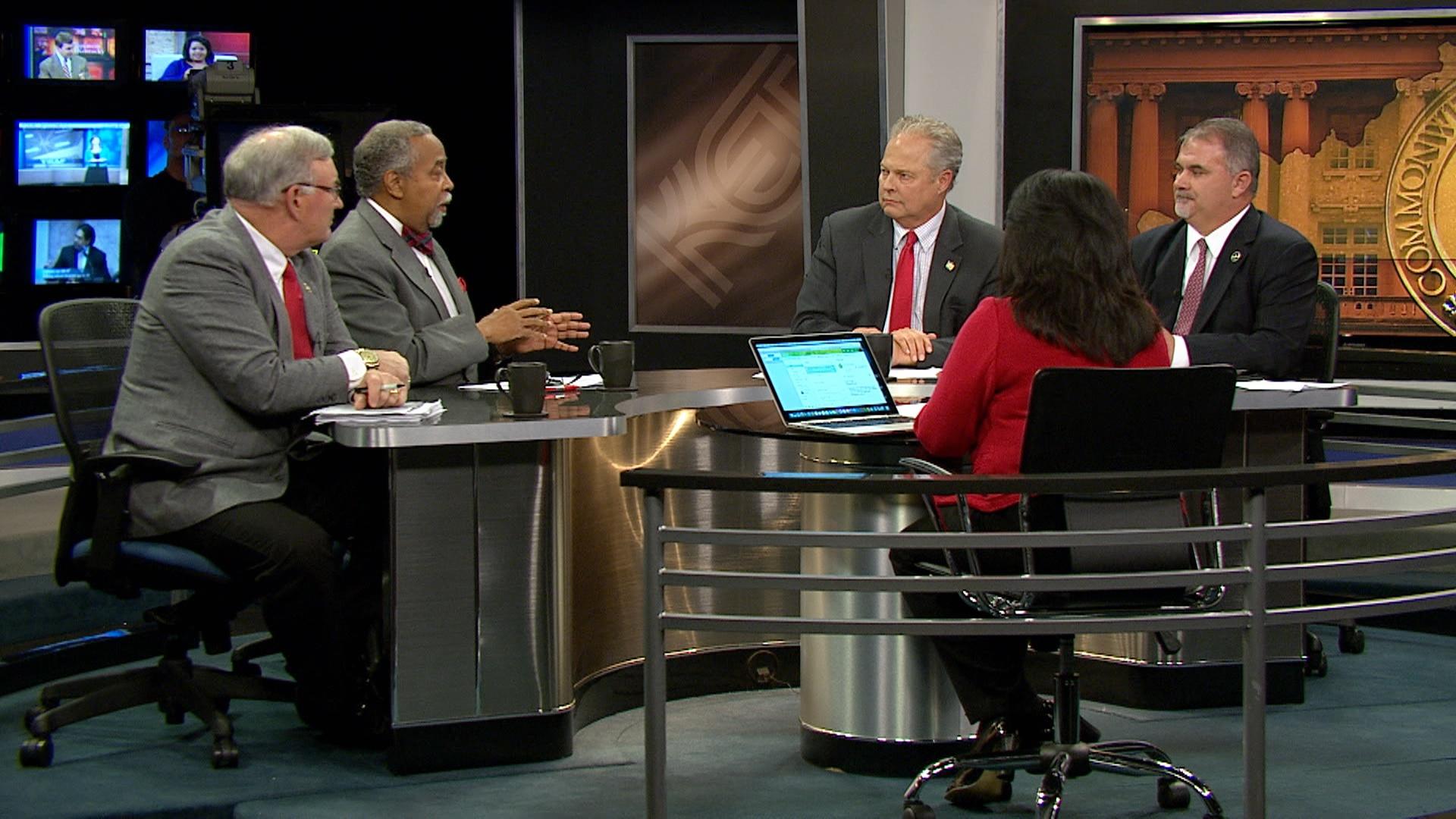