Renee Shaw and guests discuss K-through-12 public education. Does Kentucky have a teacher shortage? If so, why? What can be done to close the achievement gap and turn around low-performing schools?
S26 E32 Length 56:33 Premiere: 9.9.19

KET’s Kentucky Tonight explored the teacher shortage and other public school issues with state Education Commissioner Wayne Lewis; Houston Barber, superintendent for Frankfort Independent Schools; state Board of Education member Gary Houchens, who is also an associate professor in the Department of Educational Administration, Leadership, and Research at Western Kentucky University; and Allison Slone, a special education teacher in Rowan County and founder of KYREADS, which provides professional instruction to teachers about students with dyslexia.

The Stress of Teaching

When she started in the classroom 20 years ago, Slone says she was able to focus on teaching and meeting the academic needs of her students. Today the job is much different, she says. There’s more testing and paperwork to complete, and students come to class burdened by the struggles they face at home, from not having enough to eat to parents who have a substance abuse problem. She says that’s made the job of teaching more stressful.

“I hear people now that are in their first two to three years of teaching and they’re talking about going home at night and crying,” she says. “They’re overwhelmed.”

Slone says research indicates that teachers leave the profession because of the combined stresses of student behavior, lack of support from administrators and parents, and the non-academic demands placed on them. At the same time, Slone says young people who might dream of being educators one day see their own teachers struggling with these issues, which causes the students to pursue other career choices.

That trend is reflected in statistics collected by the Kentucky Department of Education (KDE). In 2010, about 13,000 students were enrolled in educator preparation programs at the state’s colleges and universities. By 2016, that number had dropped to 4,800.

Education Commissioner Wayne Lewis says the teacher shortage is a national phenomenon that affects urban, suburban, and rural school districts. He says the shortage is especially acute among special education teachers, and those who lead high school math, science, and career and technical education classes.

“For the better part of the last 10 years, in Kentucky and across the nation, we’ve seen a decline both in student enrollment and completion in teacher preparation programs,” says the commissioner.

Different Pathways to the Classroom

Lewis says education leaders have failed to market the profession in a way that makes it attractive to new generations of job-seekers who bring different expectations to the workplace. He says younger employees don’t plan to have the same career for more than a decade, and when they do go to work, the want more opportunities for growth and advancement.

“If we’re really going to make meaningful change in recruiting young people into the profession, we’re going to have to get more serious about those factors,” Lewis says.

Last month, KDE launched Go Teach KY, a website and social media campaign designed to boost teacher recruitment among young people as well as older workers considering a career change. Lewis says people may not know about the different options for obtaining a teacher certification, from traditional college training to alternative pathways for military veterans or those with work experience in a particular field.

“We want to do a much better job of communicating to superintendents, to school districts, to teachers, to potential teachers that there are lots of different ways you can get prepared to get into a Kentucky classroom,” says Lewis.

State officials have also made it easier on new teachers when it comes their own professional development. Last year, the Kentucky Education Professional Standards Board removed a requirement that teachers obtain a master’s degree within their first 10 years on the job. Lewis contends the requirement for an advanced degree placed an unnecessary financial burden on early career teachers. Plus he says research indicates that having a master’s doesn’t improve instructional effectiveness

State Board of Education member Gary Houchens says a master’s degree does still have value though. He says teachers who obtain a master’s will get an automatic pay increase. Plus he says an advanced degree helps prepare them for other jobs such as becoming a school counselor or principal.

“The master’s degree will still have an important place there for people for whom that makes sense,” says Houchens. “For others, there’ll be other professional growth opportunities.”

Pay, Pensions, and Other Supports

Lewis contends there’s no data to substantiate those claims, and he sees no exodus from the profession as a result of Bevin’s actions. But Slone says the real impacts won’t be felt for several years when experts determine how many people dropped teaching as a career choice because of the governor’s comments and policies.

Bevin has also touted his administration’s push to fully fund the teacher pension plan and to boost so-called SEEK funding, the per-pupil allocation local districts get from the state, to record levels. Even with those extra dollars, school advocates say school funding hasn’t kept pace with inflation.

Teacher compensation is another issue. Attorney General Steve Beshear, the Democratic nominee for governor, has proposed a $2,000 pay increase for all Kentucky public school educators. Beshear says that incentive could help address the teacher shortage.

Slone says having the extra pay would be nice, especially since teacher salaries have been stagnant in recent years, but she contends money is not why people enter the profession.

“You’re either born to be a teacher or you’re not,” says Slone. “It’s about the children.”

It’s not just salary, though. Lewis says fully funding the teacher pension plan is critical to attracting and retaining teachers, even if that comes at the expense of other line items such as textbooks, which were not funded in the current state budget.

Barber says he’d also like to see the creation of support teams that could help teachers who feel overwhelmed and are struggling to provide students with the individualized attention they need.

“It’s not just about what standard do you have to teach today,” says Barber. “It’s really about how do we mold these young people into the passions that they want to achieve.”

Houchens says all Kentuckians have a role to play in supporting teachers and improving public education.

“For Kentucky to meet its education goals, whether it’s a goal around teacher recruitment and retention, or whether it’s a goal around student achievement and improving student learning, we have to have much more engaged local communities supporting our schools,” says Houchens. “We all bear a responsibility for preparing young people for the future. That is a community-wide responsibility.”

Starting this fall every school and district will receive a rating of one to five stars based on student academic assessments, graduation rates, and student preparedness for college or career.

In addition to the star ranking, schools will receive their own report cards that go into detail about each of the factors that contribute to the overall rankings. That information will be publicly available at kyschoolreportcard.com.

Houchens says the new rankings should spark dialog among school staff, parents, and community members about the merits of their local schools.

“This accountability system puts those gaps first and foremost,” says the commissioner. “You can’t claim to be one of Kentucky’s best public schools if you have significant numbers of students or student groups that are being left behind.”

Schools that earn low rankings will not be penalized, according to Lewis. Instead they will be audited to see what functions need to be improved. Then the school will receive additional funding and other supports to address the deficiencies.

One way to improve student achievement, says Slone, is to allow teachers to get back to teaching, rather than being saddled with so many administrative duties. She also suggests putting more emphasis on student literacy and how teachers are trained to teach reading.

“Focusing on literacy will impact everything else a child does the rest of their career,” says Slone. “We need to really get back to looking at that.”

Diversity and cultural issues are also important. Houchens says students tend to learn more when they have teachers who look like them. Barber says meeting student needs begins with the teacher being able to understand the student’s background.

“One of the things in closing the achievement gap… is to know how to look through the lens of our students in a way that is culturally responsive and competent,” says Barber.

In response to the Marshall County High School shooting in January 2018, state lawmakers enacted a package of school security and safety measures during the 2019 legislative session. Senate Bill 1 not only calls for tighter security in school buildings, but also requires districts to hire more school resource officers and counselors, and provide other mental health supports for students.

What the bill didn’t include, though, was funding.

“Senate Bill 1 was a breakthrough piece of legislation in terms of what it signaled about the state’s commitment to safety and security in our schools,” says Houchens. “It will be fundamental, though, for the state legislature to follow through on that commitment with additional resources.”

Some lawmakers have already indicated their desire to provide that additional funding when they craft the new state budget during the 2020 General Assembly.

Meanwhile Slone says she will do whatever she has to do keep her Rowan County students safe, but she says she wants to do it in ways that don’t over-emphasize the possible dangers. 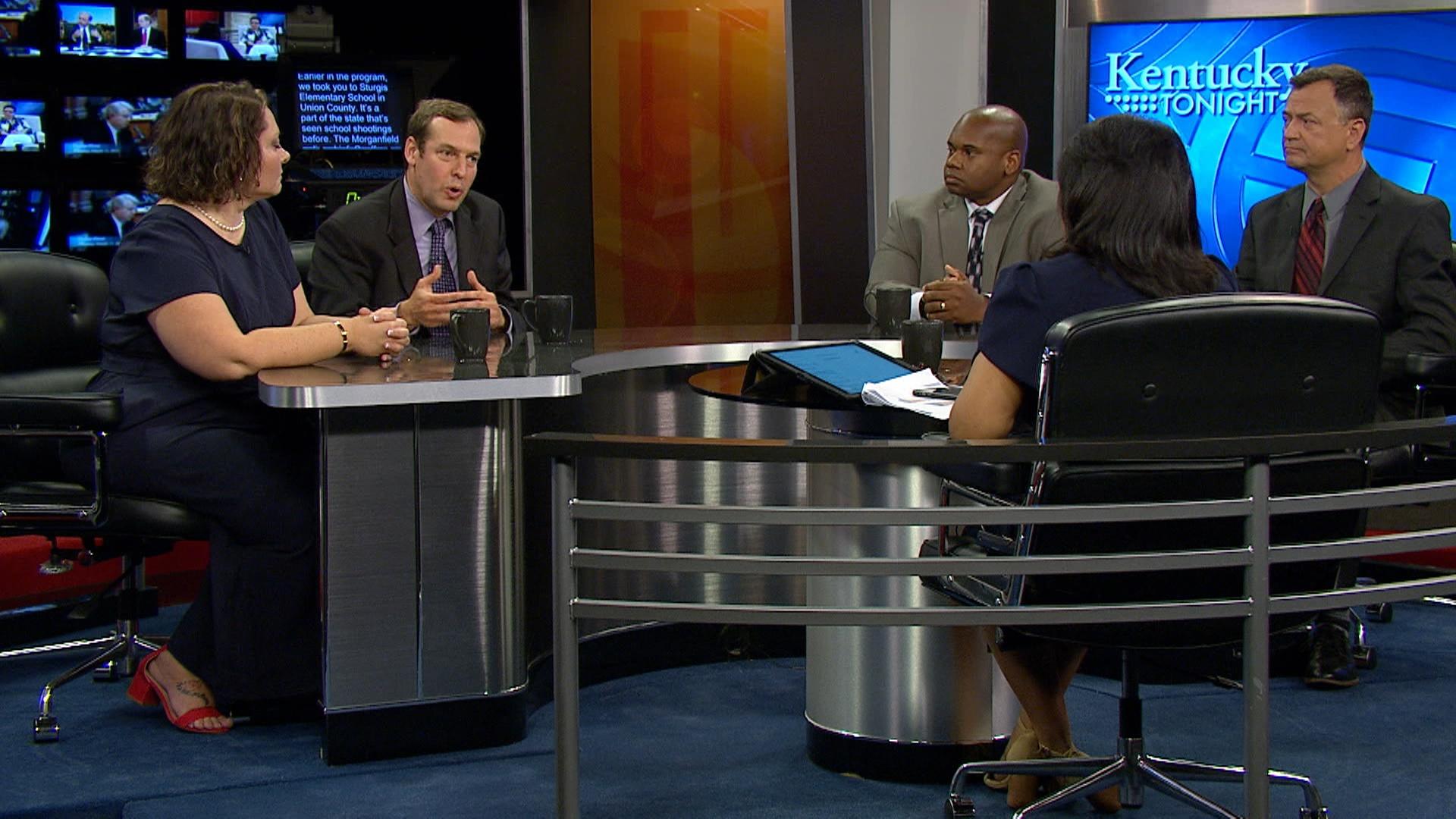