After a tense exchange about personal accusations and political attacks, the four Republican candidates for Kentucky governor settled into generally polite conversation on Monday’s edition of Kentucky Tonight on KET. Matt Bevin, James Comer, Hal Heiner, and Will T. Scott discussed education, the economy, and how their campaigns might fare against the Democratic nominee in the general election.

Accusations and Attacks
Host Bill Goodman opened the program by asking Comer if he had been truthful in his responses to allegations made against him by a former girlfriend. Marilyn Thomas and Comer dated while the two were students at Western Kentucky University. She has alleged he was physically and emotionally abusive towards her, and that Comer accompanied her to a Louisville abortion clinic.

Comer denied those accusations and says he has truthfully answered every question about the allegations. “I’m glad that this is behind us,” Comer said. “Now we’re going to close out this campaign talking about the issues and what we can do to move Kentucky forward.”

A report in the Lexington Herald-Leader has linked associates of Hal Heiner’s campaign to a blogger who has promoted the accusations against Comer. Heiner denied that he or his team had anything to do with the story.
“We’ve had no involvement whatsoever in the fact that this young lady felt the need to come forward,” Heiner said. “Never met her, never talked with her, and to my knowledge no one in our organization has as well.”

Will T. Scott declined to comment on the claims against Comer or Heiner. “I don’t deal in yesterdays,” Scott said. “I address Kentucky’s problems of tomorrow and the solutions.”

But Matt Bevin took the opportunity to blast Heiner. “Up until about a month ago, we were having good civil discourse, and there was one campaign, and everybody knows which campaign it was, that decided to soil the bed and it’s a shame,” Bevin said. He argued the dirty tactics will dampen voter turnout and shadow the Republican nominee through Election Day in November.

Heiner responded to those charges, saying Bevin has attacked fellow Republicans with negative commercials and robo-calls since his unsuccessful bid for U.S. Senate in 2013. Comer added that Heiner didn’t have the “moral authority” to criticize Bevin because of the attack ads that Citizens for Sound Government, a super PAC backing Heiner, have run against Comer and Bevin.

Separating from the Pack
Hal Heiner said the GOP primary is about who is in the best position to beat the Democratic nominee in the fall election. He sees kickstarting the economy and improving education as the two biggest issues facing Kentucky. He said he’s spent the past 25 years working in job attraction as a real estate developer in Jefferson County and advocating for education reform.

Will T. Scott pointed to his military service as a factor that makes him different from several of his GOP opponents: “I started fighting for this country when I was 19 years of age and when I came back from Vietnam, I never quit.” Scott said he fought during his time as a prosecutor and throughout his term on the Kentucky Supreme Court. He labeled the unfunded liabilities in the state pension systems as the biggest problem before the commonwealth.

Being an Army veteran is also part of Louisville businessman Matt Bevin’s background. He said his military service coupled with an impoverished upbringing give him empathy for the way many Kentuckians live, and inform his approach to job creation. Bevin said he would foster an environment to enable the private sector to grow more jobs. He also wants to address the pension crisis, which he said hinders job attraction.

Kentucky Agriculture Commissioner James Comer said his campaign is unique for its focus on the middle class. He wants to make higher education and technical training more affordable, and he favors an earned income tax credit for working class families. Pointing to his time in the General Assembly, Comer said he is the only candidate who can pass legislation in a politically divided legislature.

Heiner argued that a boost in personal incomes is hampered by poor job training. He said businesses have good-paying jobs available but can’t find the skilled workers to fill them. Heiner said technology is eliminating low-skilled jobs yet Kentucky’s education system is failing to train people for the higher-skilled occupations of the future.

A diversified economy is also important, according to Comer. He said the state has depended on legacy industries for too long. He also pledged that his administration would not give tax incentives to businesses that don’t pay a living wage or offer health benefits to their employees.

As for improving the economy of eastern Kentucky, all four candidates said they would continue to support the Shaping Our Appalachian Region initiative. Bevin, Comer, and Heiner support making Kentucky a right to work state. Scott said he favors local communities making that decision for themselves, but said he would not run on a statewide right to work platform because he believes it would cost the GOP the election in the fall.

The Common Core Standards
The four Republicans also agree that the Common Core educational standards should be repealed. Scott said the standards take away the rights of Kentucky educators to teach students about things important to the commonwealth. Bevin said it was good in theory, but the implementation is not working. He said the standards have turned educators into test providers and students into test takers.

Comer said he supports the public school system but says it’s changed for the worse since the Obama administration made funding conditional on accepting federal policies on things like Common Core and Race to the Top.

“I want to return local decision-making back to our local schools and out of the hands of our Washington, D.C., bureaucrats,” Comer said. “We’re losing some of our best teachers in the state every day because they feel like they’re having to teach to the test and not teach the way that they were taught.”

Heiner said Common Core was a “noble effort” but he contends federal officials should stay out of matters best decided at the state and local level. He said there should be a firewall between Washington and Kentucky on education as well as health care, energy, and agricultural policies.

Other Education Issues
The candidates are mixed on whether teacher pay should be based on performance. Heiner said it should, but that teacher effectiveness should be based on individual student growth over the course of a school year rather than on an average for an entire class.

Comer said basing pay on performance is a good idea, but feared it would lead to even more testing to assess that performance, and possibly greater financial burdens for cash-strapped rural school systems. Scott argued that outcome-based pay would lead to greater bureaucracy in the public schools. And Bevin said he favors assessing outcomes as one metric for setting teacher salaries.

On early childhood education, Bevin argued that research shows Head Start makes no difference on student performance after third grade. He contends the billions spent on that program would be better allocated to other efforts.

Comer said he would review all education spending to see what programs are most effective and where money is being wasted.

Scott said he would love to put more money into early childhood education to the extent that extra state funds could be found.

Heiner opted for creating what he called a K – 14 system, so that students go from kindergarten through at least two years of post-secondary education and are better prepared to enter the workforce.

The Pension Problem
The greatest difference among the Republican contenders comes in how they would address the state’s ailing pension systems. Scott said he’s against raising the sales tax or issuing bonds to shore up the retirement plans. Instead he advocates a constitutional amendment to allow expanded gaming, with the proceeds going to the unfunded liabilities in the pension systems.

Heiner said the first step is to stop the accrual of new liabilities. He also favors shifting the systems from a defined benefit plan to a defined contribution plan. Comer said he wants to privatize the management of the systems, and change the benefit structure for future hires. He said that would include raising the retirement age.

Bevin argued the current retirement system is a “dinosaur” and said that the defined benefits plan must be frozen immediately. He wants to encourage those already in the system to withdraw a lump sum from their retirements and privately invest it, and he wants all new hires placed into a 401(k)-type plan. Bevin also called for an independent audit of all the state pension systems.

Winning the General Election
If Attorney General Jack Conway and his running mate, Rep. Sannie Overly, win the Democratic gubernatorial nomination, as is widely expected, how would the Republicans match up?

“The contrast between Jack and I couldn’t be clearer,” said fellow Louisvillian Hal Heiner. “He’s spent his life in Frankfort, I’ve spent my life in the private sector growing a business… Plus I’m the only candidate in this room that I believe will beat him in his home county.”

Bevin called Conway and Overly two liberal, urban lawyers from privileged environments. In contrast, he says he and his running mate, Jenean Hampton, come from impoverished backgrounds, are military veterans, and have decades of experience managing businesses and creating jobs in the private sector.

James Comer said he and Conway disagree on most every issue and that Kentuckians favor a conservative agenda. He predicted that numerous Democratic county judge-executives and magistrates will support his campaign over Conway’s.

And Scott said by not pushing the right to work issue he would be able to win voters in the eastern and western Kentucky coalfields and among union members in Louisville, Lexington, and northern Kentucky. 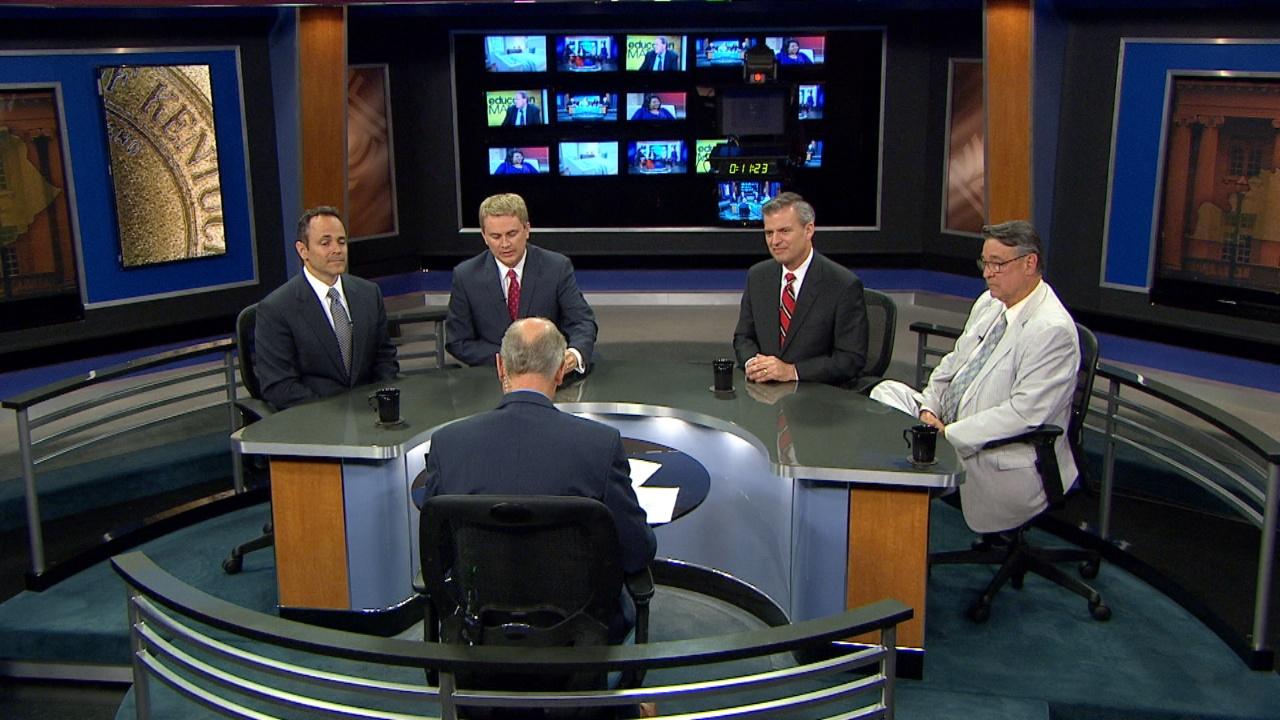