There’s two weeks until Election Day, but more than 600,000 Kentuckians have already voted by absentee ballot or in person at early voting locations in every county.

“This is going to be an election unlike any other”, says Kentucky House Minority Whip Angie Hatton (D-Whitesburg). “This coronavirus has caused us to start thinking outside the box in a whole lot of different ways.”

The question is, will the weeks of early voting options impact the outcome of the state’s most closely watched race between incumbent Republican Sen. Mitch McConnell and his Democratic challenger Amy McGrath?

Money and Messaging in the U.S. Senate Race

“This has become a very hard state for a Democrat statewide candidate to win in,” he says. “Amy McGrath is probably going to spend $80-$90 million and I think she’ll probably lose by 10 points.”

Although Democrats had some advantages in the 2018 midterm elections, Stivers says Republican candidates dominated in the contests for statewide constitutional offices last year, except for the governor’s race. There, Democrat Andy Beshear edged out Republican incumbent Matt Bevin by just over 5,000 votes.

“What I think Democrats have going for them right now is enthusiasm,” says Senate Minority Leader Morgan McGarvey (D-Louisville). “I would look for a strong surge from [McGrath] over the last couple of weeks” of the campaign.

McGrath has outraised Senate Majority Leader McConnell in fundraising in recent months, and she’s made COVID-19 a campaign issue, pointing out how McConnell has failed to take up a pandemic aid package passed by the House of Representatives months ago. McGarvey says that’s a compelling argument for voters.

But state House Speaker David Osborne (R-Prospect) says McConnell has been a strong leader for the state and the nation, while McGrath has struggled to connect with voters.

“She changes her message every week because clearly she’s yet to find one that resonates with the people of Kentucky,” says Osborne.
Hatton agrees that McGrath’s strongest message has been late in coming. She sees the racing as turning on voter turnout between the more Republican rural areas of the state versus the more Democratic urban centers.

“The governor’s race last year is proof that a very unpopular Republican candidate, with very strong turnout from the urban areas, may well be defeated,” says Hatton.

Hatton says she hopes Democrats can also make some headway this year in the state House, where Republicans hold a 62 to 38 majority. She says recent Democratic voter registrations are double Republican registrations in Jefferson County and triple in Fayette County.

While all 100 House seats are up for reelection this year, only eight of them are open contests. Osborne says seven of those races are in rural areas, which should benefit the GOP candidates.

Here are a few races the leaders are closely watching this year.

This race may come down to demographics. McGarvey says the eastern Jefferson County district is trending towards younger people and more Democratic voters. In 2016, Republican Donald Trump carried the district by 7 points in the presidential election. In 2019, Democrat Andy Beshear won the district by 14 points in the gubernatorial race.

House District 93: Incumbent Democrat Chris Harris is stepping down to run for the state Supreme Court. The Republican candidate Norma Kirk-McCormick competed for the seat representing Martin County and part of Pike County in 2018 and 2016. Hatton says Democratic newcomer Rod Varney is a popular former principal at Belfry High School. She says she expects Democrats to hold that seat.

House District 22: This is another open seat due to the retirement of Democrat Wilson Stone after more than a decade in the legislature. The race to represent Allen and Simpson Counties as well as part of Warren County features Democrat David Young and Republican Shawn McPherson.

Senate District 7: Popular Democrat, former governor, and long-time legislator Julian Carroll is retiring from the seat that covers Anderson, Franklin, Gallatin, Owen, and Woodford Counties. State Rep. Joe Graviss of Versailles is the Democrat in race, running against Republican Adrienne Southworth. She is a Tea Party activist who served as deputy chief of staff for former Lt. Gov. Jenean Hampton.

McGarvey says the district is trending more Republican, but he thinks Graviss’ reputation as a successful businessman and legislator with expertise on the public pension systems will carry the Democrat to victory.

Stivers says he considers the race a toss-up that is complicated by the fact that Julian Carroll’s son is also a candidate in the race. Ken Carroll is running as an independent.

Senate District 23: Incumbent Republican Chris McDaniel of Taylor Mill has served in the in the Senate since 2013 and risen to chair the Appropriations and Revenue Committee there. He faces Democrat Ryan Olexia, an Army veteran and veterinarian in Ft. Mitchell.

Stivers says the strength of McDaniel’s campaign machine should carry him to victory. But Hatton says Democrats recently have outpaced Republicans in voter registrations in northern Kentucky. This is another district that favored President Trump in 2016, but went to Gov. Beshear in 2019.

This year’s ballot includes two proposed amendments to the state constitution. The first, known as Marsy’s Law, would create a crime victims’ bill of rights. The amendment would give victims the right to be heard in court proceedings as well as notification of the release, escape or pardon of the accused, and reasonable protection from the accused.

Voters approved the amendment in 2018. But the Kentucky Supreme Court later overruled that outcome because the entire language of the amendment did not appear on the ballot.

“The majority of this state has felt the victim’s need that notification at whatever point in the criminal process it is,” says Stivers. “It’s requiring notice about what’s going on in the system.”

But Hatton and McGarvey say the wording of the amendment is flawed and could cause problems.

“I’ve heard a lot of concern from prosecutors... that it has the potential to be really costly and time consuming,” says Hatton. “If it’s carried out to its most illogical extreme, it really could upset a lot of the balance in court and give a lot of power to victims to make demands.”

McGarvey says the amendment also raises questions about who pays for the victim’s counsel as well as presumption of innocence.

“Just having a victim does not mean the person on trial is guilty,” says McGarvey. “We want to protect the presumption of innocence until guilt.”

“Every judge that I talked to both current and former... overwhelmingly believe that this would provide a lot of continuity and would professionalize the people on the bench,” says Osborne.

Stivers agrees, saying the lawyers with at least a decade of experience become the best jurists. McGarvey also agrees with the experience criteria, but he says he wished lawmakers had pursued broader judicial reforms rather than this piecemeal measure.

Sen. John Schickel (R-Union), who opposes both proposed amendments, argues that the terms for judges and prosecutors should be set at four years so that voters have more opportunity to select who fills those positions.

The coronavirus pandemic forced state election officials to implement a range of new balloting options to help protect the health of voters and poll workers. That includes three weeks of early in-person voting, and greater flexibility in who can vote by absentee ballot. Osborne says the changes have been a challenge for county clerks around the state.

“This is a tremendous undertaking for them and one that, quite frankly, they’re not 100 percent prepared for,” says the House Speaker. “There were some tasks put on them that they weren’t necessarily in favor of.”
Stivers contends it’s also a challenge for voters who have to wade through the usual barrage of campaign ads and then decide whether to wait and vote as usual on Election Day or select one of the early voting options.

“As we travel down these new roads, you always learn about where the potholes and speed bumps are,” says the Senate President. “I think there’s probably a real sense of voter fatigue.”

The House Speaker also says he’s open to continuing expanded voting opportunities in the future as long as election officials can guarantee a secure process.

“It will become the expectation as long as the final product is delivered in a transparent manner that everybody has confidence in,” says Osborne.

McGarvey says the legislature should update the state’s balloting procedures to permanently include a period of early voting, including at least one Saturday, and easier access to absentee ballots.

“The Kentucky system of allowing people to vote on one day from 6 a.m. to 6 p.m. is prohibitively restrictive,” says McGarvey. “As long as we can ensure these elections are safe and fair, I think we should make them as accessible as possible.”

When lawmakers convene for the 2021 legislative session they’ll have the unusual task of preparing an off-year state budget. Due to fiscal uncertainties created by pandemic-related shutdowns, lawmakers passed a one-year spending plan instead of a two-year budget at the end of the 2020 session. Osborne says the uncertainties continue.

“The biggest problem that we have with budgeting right now is clarity,” says the House Speaker. “There’s just no clarity as to what we’re looking at long term.”

Osborne says the state will need federal stimulus assistance to help cover the more than $1 billion Gov. Beshear has borrowed from the federal government to pay unemployment benefits to out-of-work Kentuckians. Otherwise, Osborne says that bill will fall on small businesses in the state that will face higher unemployment insurance rates.

McGarvey agrees that more Congressional aid for unemployment benefits is crucial for the commonwealth. 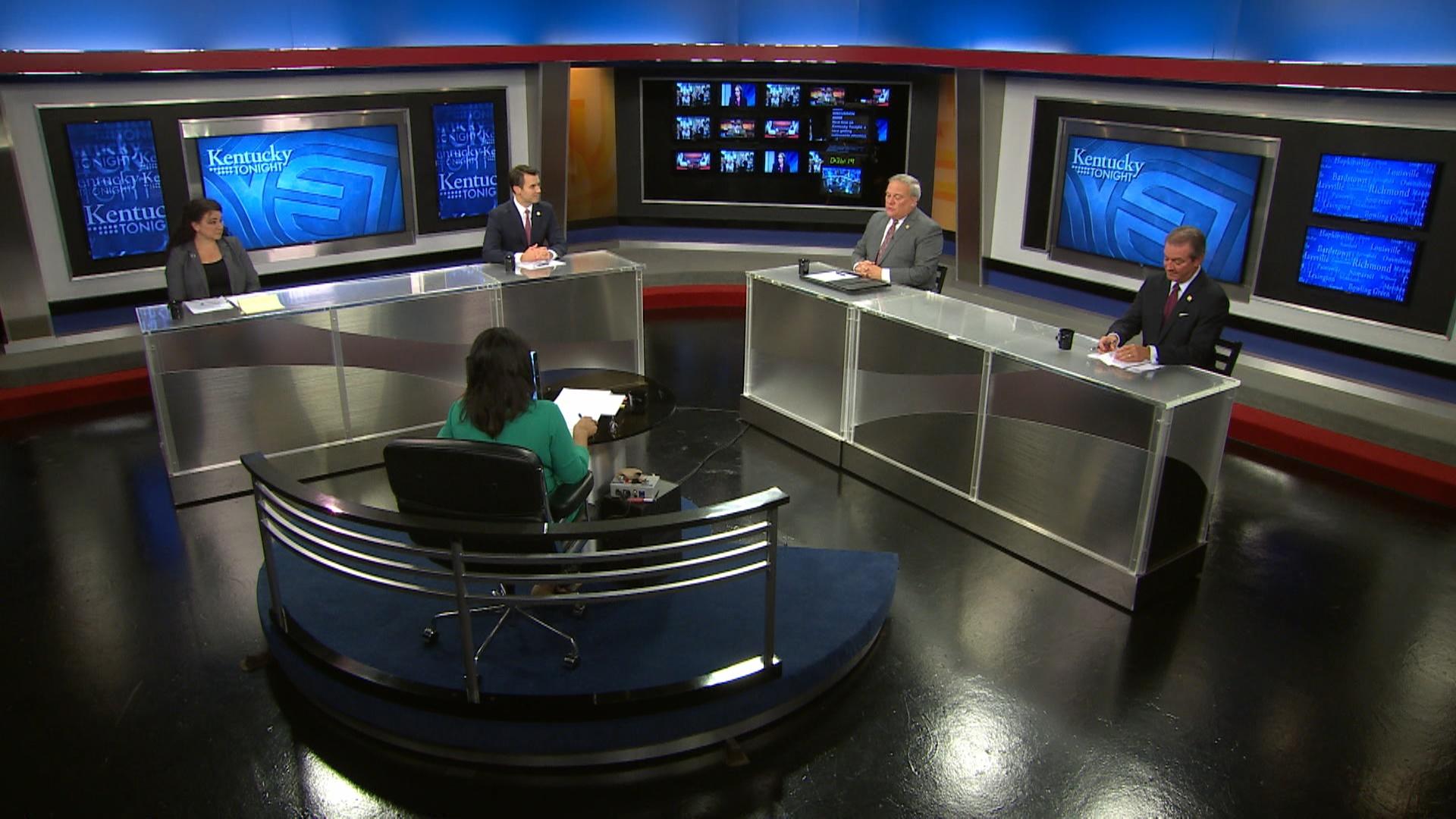