Even with the nation shut down and people staying home for much of last year because of the COVID-19 pandemic, mass shootings in America continued at a record pace.

According to the Gun Violence Archive, a Lexington-based website that tracks a range of criminal, accidental, defensive, and suicidal shootings nationwide, they year 2020 saw 610 mass shootings in which four or more people were wounded or killed. That total far exceeds the six previous years for which the archive has tracked such data.

For this year, the archive reports 169 mass shootings as of April 30, a pace of more than one a day. That number includes the April 15 shooting at a Federal Express facility in Indianapolis that killed 9 people and injured seven, as well as a Jan. 22 incident at a Covington, Ky., bar that left five people wounded.

“We believe that it’s important to look at entire picture and then let people draw their conclusions from that,” says Mark Bryant of the Gun Violence Archive, who is a gunowner himself. “Our number also ensures that you look at those that are injured.”

Louisvillian Whitney Austin is a mass shooting survivor. The former Fifth Third Bank executive was walking into the company’s building in downtown Cincinnati on Sept. 6, 2018, when a gunman opened fire in the lobby.

“I was shot 12 times and not once did a bullet hit a major organ or artery,” says Austin. “I am a miracle.”

But four people did die that morning, including the shooter. The incident proved a turning point in Austin’s life. She left her banking job to cofound with her husband the non-profit organization Whitney/Strong to advocate for responsible firearm ownership and help prevent other people from being victims of gun violence. Austin says she won’t accept a fatalistic attitude that says nothing can be done to curb deaths and injuries by firearms in the United States.

“There is absolutely something we can do at the legislative level that won’t be burdensome on gunowners but will help reduce the levels of gun violence in this state,” she says.

For months Austin worked with Democrats and Republicans as well as those who own guns and those who don’t to develop a solution she calls crisis aversion and rights retention (CARR) orders. That’s a judicial process by which firearms would be temporarily removed from a gun owner in the throes of a mental health or substance abuse crisis. Austin says that individual would then receive the counseling or treatment they need.

“We don’t want people permanently separated from their firearm,” she says. “We want to get them help so they can get back to their firearm in a place in which it is safe.”

Beyond averting mass shootings, Austin says her proposal could save the lives of gun owners.

“Two out of three gun deaths are attributed to suicide,” she says, “and people don’t know that that disproportionately impacts older white males in the state of Kentucky.”

Austin’s proposal gained the bipartisan support of state Senators Paul Hornback (R-Shelbyville) and Morgan McGarvey (D-Louisville), who sponsored it as Senate Bill 229 in the 2021 General Assembly session. The legislation never made it out of committee.

A Question of Due-Process Rights

The CARR proposal is similar to extreme risk protective orders and so-called red flag laws to confiscate weapons from a gun owner deemed to be as risk of harming themselves or others. Austin says 20 states already have such measures, including Indiana and Illinois.

Critics contend these measures violate the rights of gun owners.

“You cannot have a right revoked without due process,” says David Burnett, a registered nurse, attorney, and firearms advocate in Lexington. “I’m very concerned that that process wouldn’t comply with 5th and 14th Amendments,” to the U.S. Constitution.

Although he’s treated shooting victims in intensive care, Burnett says ideas like CARR and red flag laws are too broad, and the criteria for having a firearm confiscated too vague.

Beyond due process issues, Burnett argues that emergency confiscation orders don’t always stop the shootings they are designed to prevent. For example, he says the shooter at the Federal Express facility in Indianapolis did have a gun seized by police, yet he was still able to purchase another weapon because of what Burnett describes as a deficiency in Indiana’s red flag process. Plus he says people who already have a felony conviction or an emergency protective order against them can’t legally own guns.

Austin says courts have consistently upheld red flag laws in the states that have them, and that any such proposal must have a high burden of proof to justify confiscating a firearm from a gun owner.

In his speech before Congress on April 28, President Joe Biden called on lawmakers to curb what he calls the epidemic of gun violence in America by reinstating a federal ban on assault weapons and high-capacity magazines and by strengthening background checks on gun buyers.

But even those actions, which polling indicates have broad public support, concern some gun owners.

“Any attempt to subvert or circumvent the 2nd Amendment is wrong,” says Edwin Nighbert, president of the League of Kentucky Sportsmen, which is the state affiliate of the National Rifle Association. “I think that we’ve restricted it way too much at this point in time.”

He contends the problem is not guns, but the people who use them. He says we need to better understand the societal issues that lead to gun violence. He also argues that since existing gun laws are not properly enforced, there’s no accurate data about the effectiveness of those regulations.

Nighbert faults red flag laws for setting up a situation where it’s one person’s word against the gunowner, and he says judges usually take the side of the potential victim. As for background checks, he says the existing system worked well until being swamped in recent years by a spike in guns sales. Now, he says the FBI is only able to do human-based processing of about half of the firearms transaction applications submitted to the agency.

Burnett says the problem with background checks is that people with criminal intent avoid them by making black-market purchases or by stealing weapons. He also fears that the law enforcement agencies conducting the checks might erroneously deny a gun sale to a law-abiding citizen who should be able to protect themselves.

“At the end of the day, when that system breaks down, as inevitably systems do, I don’t want to be left empty handed and having to play dead or hoping that the shooter is a bad shot,” says Burnett.

Austin says the National Instant Criminal Background Check System (NICS) operated by the FBI should be better funded and that the checks should be required for all gun purchases.

Mark Bryant of the Gun Violence Archive agrees that the background check system isn’t perfect. He says lawmakers should close a loophole that allows a gun sale to be proceed if the background check is not completed within three business days. They can also crack down on cash sales of guns at swap meets by sellers who aren’t federally licensed, or straw buyers who purchase a gun for someone who may be unable to legally own one.

As for the 2nd Amendment to the U.S. Constitution, which was written in the 18th century, Bryant says it’s time to update it to reflect 21st century realities.

“The 2nd amendment is not sacrosanct to where it cannot be changed,” he says.

Nighbert says the amendment was written to give Americans the ability to overthrow a tyrannical government, a situation he contends can exist today as much as it did in the 1700s. As a self-described expert marksman who owns “an arsenal of weapons,” Nighbert says he’s never had to pull a gun on another person. But he also says he wants to be prepared if martial law is declared.

“If there’s a compromise to be made that does not affect us and trade our rights for a little bit of freedom, then I’m for it,” says Nighbert. “But we do not and you cannot legislate morality.” 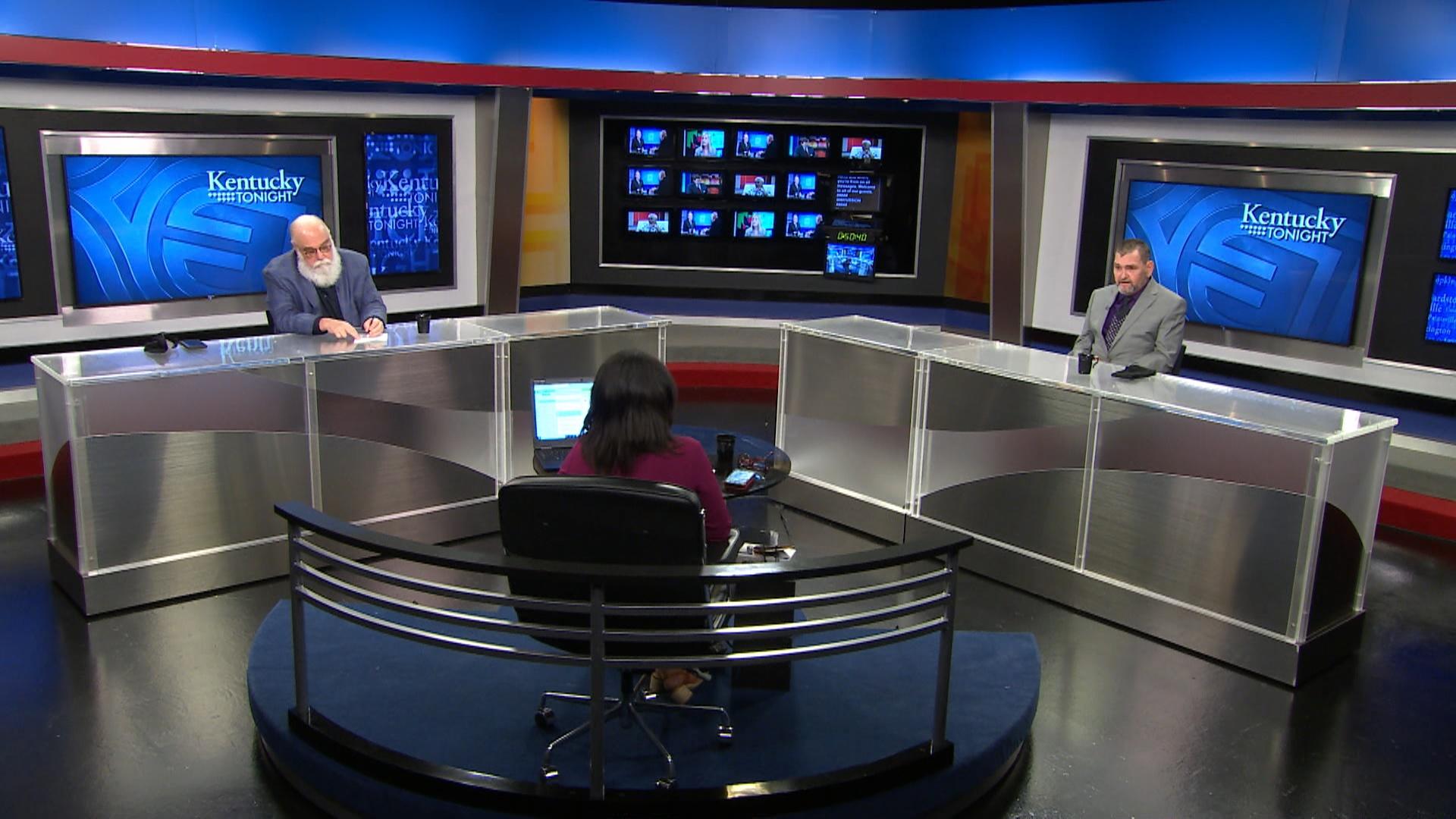