After gaining re-approval from the federal regulators last month, the Kentucky Cabinet for Health and Family Services (CHFS) is poised to launch changes to the state Medicaid system this spring.

Officials with Gov. Matt Bevin’s administration say the changes, which include work requirements for some recipients as well as premiums for coverage and copayments for certain services, are necessary to keep Medicaid solvent for the long term. Critics fear those changes could leave thousands of Kentuckians without health care coverage and lead to poorer health outcomes.

The Background
The Centers for Medicare and Medicaid Services (CMS) first approved the Bevin administration plan called Kentucky HEALTH back in January. That made the commonwealth the first state in the nation to win federal approval to make Medicaid coverage contingent on fulfilling a work requirement. This work requirement applies to a certain group of persons in the expanded Medicaid population. Medicaid coverage was expanded in Kentucky under Gov. Bevin’s predecessor, Steve Beshear, as part of the Affordable Care Act.

But just hours before the new plan was to roll out in July, a federal judge blocked the launch. Responding to a legal challenge brought by 15 Kentuckians who depend on Medicaid for health services, U.S. District Judge James Boasberg said federal approval of Kentucky’s waiver application was “arbitrary and capricious.” In his ruling, he said regulators did not adequately consider the effects on people who might lose coverage under the plan.

The state government’s own estimate indicates that some 95,000 Kentuckians could be forced from the Medicaid rolls as a result of the changes. Boasberg ordered the state’s plan to be sent back to CMS for further consideration.

On Nov. 20, CMS issued its re-approval for Kentucky HEALTH with some minor changes. CHFS Deputy Secretary Kristi Putnam says individuals receiving Transitional Medicaid Assistance will not be required to pay premiums. Other changes include provisions to grant medically frail status to domestic violence victims as well as a 30-day notice for implementation of community engagement requirements. Putnam says CMS also placed additional monitoring and evaluation protocols on the state to track the impacts of the changes. Federal regulators also wanted safeguards to help people who get kicked off Medicaid for failing to comply with the changes to get their coverage reinstated.

Under the current timeline, the state plans to launch the Kentucky HEALTH on April 1. But additional legal challenges from the original plaintiffs or other opponents could further delay implementation of the new program.

Community Engagement
Under Kentucky HEALTH, able-bodied working-age adults who aren’t medically frail or primary caregivers will be required to work, volunteer, or pursue job training for 80 hours a month to remain eligible for coverage under the Medicaid expansion. If beneficiaries already work, those hours will count towards this requirement. Short- and long-term exemptions from the requirement are available to those with transportation issues or those who have an illness or injury.

Although often called a “work requirement,” the Bevin administration prefers to refer to it as “community engagement” designed to get people into jobs or get them prepared to take on better, higher-paying jobs that include health coverage.

Putnam says people will be able to report their community engagement activities at local career centers or online. And she says people will have a 60-day grace period to make up any hours they fail to meet in a given month.

Critics of the requirement point out that about two-thirds of people in the expanded Medicaid program, which is for able-bodied, low-income adults, already have jobs.

“There’s certainly not anything wrong with incentivizing work – I think that’s what we should be doing as policymakers,” says Rep. McKenzie Cantrell. “The problem is, and the data bears out, that a lot of these recipients are already working, so… why are we subjecting them to this new type of red tape?”

Arkansas implemented a similar Medicaid work requirement earlier this year. Dustin Pugel of the Kentucky Center for Economic Policy says it has already resulted in more than 12,000 Arkansans losing coverage for failing to properly report their hours. He says work requirements instituted in 1996 for Supplemental Nutrition Assistance Program (SNAP) benefits and Temporary Assistance for Needy Families (TANF) have resulted in people losing those benefits as well.

The state’s Medicaid work requirement will launch in northern Kentucky, and roll out in other regions later in 2019, according to Putnam.

“We will have some dashboards that we will monitor daily that give us early indicators if there are any concerns or any numbers that we should be looking at, and any reason for us to alter that rollout schedule,” Putnam says. “We have a lot of flexibility.”

For his part, Sen. Ralph Alvarado, who is also a practicing physician, says he has no problem with incentivizing healthier lifestyles and encouraging able-bodied adults who aren’t working to get a job or to pursue training to improve their skills. He says that will position them to move off Medicaid and into a private insurance plan, which he contends is good for the individual and good for Kentucky’s budget. He says the expansion is already costing the state millions of dollars.

“It’s going to cost us more money in the future,” the senator says. “We’ve got to find a way to be able to get folks, if we can, into private insurance. This, I think, is an opportunity for us to do that.”

Medically Frail Individuals
Medicaid enrollees deemed to be medically frail are exempt from the community engagement requirement. Qualifying conditions include a mental or physical condition that impairs daily activities, a substance use disorder, and chronic homelessness. Survivors of domestic violence also qualify as medically frail.

Putnam says a doctor or health care professional usually makes the determination of medical frailty by completing a seven-page form. Under certain circumstances, people can self-attest to a condition and receive medically frail status for six to 12 months, depending on the situation. Those who are denied the status can appeal the determination to CHFS.

Pugel and Cantrell fear the intricacies of the rules may trip up people who deserve medically frail status. For example, a person in treatment for substance abuse is considered medically frail, according to Pugel, but someone with an addiction but not in treatment does not qualify. Cantrell says that could lead to desperate individuals being denied coverage.

“Anything that our state can do to keep these people from falling through the cracks, we need to do it,” Cantrell says. “These people are more than a paperwork problem.”

Pugel says there’s also an issue with doctors having to complete even more paperwork, and doing so in a complete and accurate manner. Alvarado downplays that concern.

“Doctors will always groan at having to fill out paperwork, I know I do,” Alvarado says. “But we do it nonetheless.”

Premiums and Copayments
Beginning in April, most Kentucky HEALTH enrollees will have to pay small monthly premiums, ranging from $1 to $15 a month based on their incomes. (Pregnant women and children are exempt from premiums.) Putnam says after the first two years, premiums will begin to increase until they reach a maximum of $37.50 per month for family coverage.

Copayments for services will range from $3 to $50, but those who maintain their premium payments will not be charged copays.

If an individual earns below the federal poverty level and misses two premium payments, they won’t lose coverage, says Pugel. Instead they will have to make copayments for their medical services. However, if the person earns more than the poverty level and they miss two payments, their coverage is terminated for up to six months.

Putnam says the premiums and copays are necessary to help the state keep the Medicaid program afloat. When former Gov. Beshear implemented the Medicaid expansion in 2014, the federal government paid all of the costs of coverage. By 2020, the state will have to pick up 10 percent of that tab.

“You really have to take a look at where is that funding going to come from five [or] 10 years from now,” Putnam says. “We can’t perpetuate 450,000 people on an expanded Medicaid program indefinitely. The money is just not in the state budget.”

Dental and Vision Coverage
The Bevin administration’s plan also cuts vision and dental coverage for those in the Medicaid expansion. But enrollees can purchase that coverage separately using credits to their My Rewards accounts. Individuals earn virtual dollars for the accounts by performing certain tasks, like having annual physical exams, getting their GED, or completing a smoking cessation program. (Those deemed medically frail will continue to receive dental and vision services in their Medicaid coverage.)

Putnam says she hopes to expand the My Rewards program in the future to include some over-the-counter medications and supplies as well as fitness services. 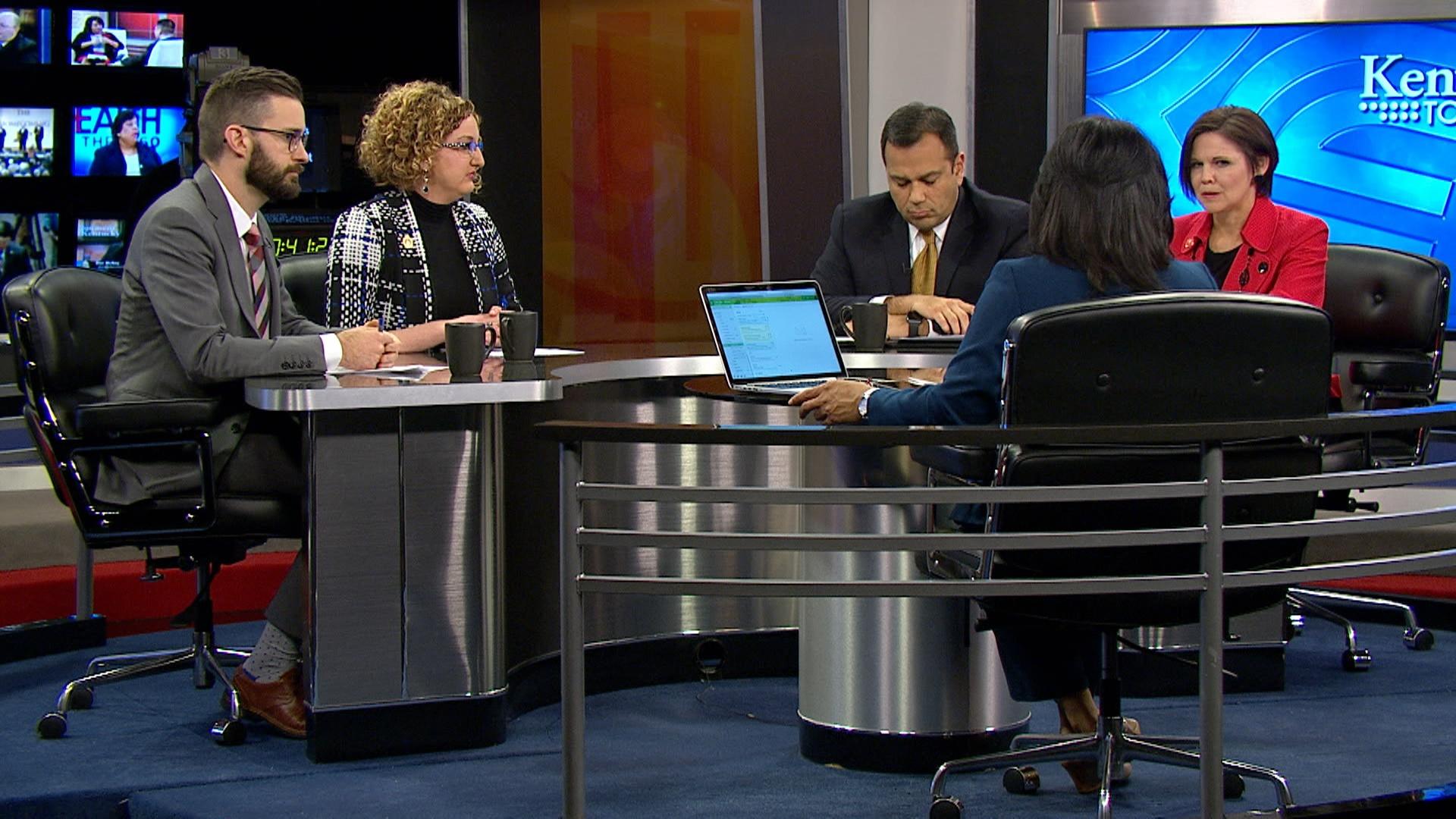