The use of marijuana for medicinal purposes is legal in 33 states and the District of Columbia. This week, state lawmakers in Frankfort could put Kentucky on the path to being the next state allow the regulated use of cannabis derivatives for certain medical conditions.

The House Judiciary Committee is scheduled to take up House Bill 136 in their Wednesday, Feb. 12 meeting. Similar medical marijuana legislation passed that panel last year on a 16 to 1 vote, but then failed to get to the House floor in the waning days of the 2019 session.

Rep. Jason Nemes (R-Louisville) is confident that his bipartisan bill can make it to the finish line this year.

“The support has only improved,” says Nemes. “We'll come out of the Judiciary Committee very strong and then we're early enough in the session now... to not only pass it out of the House but go over to the Senate, where I think it will be successful."

What's in the Bill

HB 136 would legalize medical marijuana in Kentucky and create a regulatory framework for cultivating, producing, packaging, and dispensing the cannabis-based products.

Nemes says patients seeking medical marijuana would have to have a qualifying condition such as epilepsy or multiple sclerosis. They would also need to have a bona fide relationship with a physician approved by Kentucky Board of Medical Licensure to prescribe marijuana. If the doctor grants the treatment, the patient would then receive a registration card that will enable them to purchase cannabis-based products from licensed dispensary.

Law enforcement would be able to track medical marijuana sales through the KASPER database that records all prescription drug transactions in the state.

This year's bill has several key differences from last year's version of the legislation. Now, the Cabinet for Health and Family Services will manage the medical marijuana program, not Alcohol Beverage Control. Nemes says since this is a medicine, it's more appropriate that CHFS be the regulatory agency.

While the new bill allows cannabis-based pills, oils, salves, and tinctures, it prohibits the use of smokable marijuana or products that could be attractive to children, such as gummy candies. Nemes also struck a provision from last year's measure that would have allowed people to grow a few marijuana plants for their personal use.

“I want it to be available to poor people and that's why I wanted self-growing, but self-grow is not in there this year,” says Nemes. “I couldn’t get it passed the House with that in there, and so it’s out.”

The legislation also allows cities and counties to opt out of the program if local officials decide they don't want a dispensary in their community.

Nemes' bill would not tax medical marijuana, as Gov. Andy Beshear has proposed. Licensing fees will cover the costs to administer the program, with a small amount set aside for medical marijuana research conducted by state universities.

HB 136 creates an oversight board comprised of physicians, pharmacists, and patient advocates charged with maintaining the list of qualifying medical conditions and recommended dosages to treat those ailments.

While it's common to hear anecdotal evidence on the benefits of medical marijuana, the dearth of research into medicines derived from cannabis underlies much of the opposition to measures like HB 136.

“There are no high-quality, long-term studies on the efficacy and safety of this substance – absolutely none,” says Ed Shemelya, national coordinator of the National Marijuana Initiative, which is run by the United States Office of National Drug Control Policy.

But doing that research is challenging so long as marijuana remains a Schedule 1 narcotic, which federal regulators define as a drug with no accepted medical use and high potential for abuse. That classification brings with it strict government regulations about who can study cannabis and the 100-plus chemical compounds it contains.

There is one cannabis-based prescription drug available on the market: Epidiolex has been proven effective in treating seizures among children with certain forms of epilepsy. Block says that proves that marijuana should not be a Schedule 1 drug.

“It's critically important to have unfettered research without the constraints that we're saying that Schedule 1 presents,” says Block.

Although he opposes HB 136, Dr. Danesh Mazloomdoost, an anesthesiologist and pain specialist in Lexington, agrees that marijuana should be reclassified to allow for more clinical studies.

“Unless we have the ability to start studying this, how would we ever know what combination of those medications are needed, what concentrations are needed to get the best out of it with minimizing the risks,” he says. “When you call something medicine, you’re connoting a level of evidence behind it and a level of safety.”

Epidiolex went through extensive clinical trials before gaining Food and Drug Administration approval in 2018, according to Shemelya. He says other marijuana derivatives should be treated the same way.

“Let’s subject this drug to the rigorous trials that we do all other substances in this country,” says Shemelya. “It doesn't get a pass through the state legislatures or, God forbid, voter ballot referendums, and that’s how we’ve done it in each and every instance.”

But awaiting long-term studies and FDA approvals means patients who might benefit from medical marijuana would be denied legal access to it. Nemes downplays FDA approval because he says the agency allowed highly addictive opioid-based painkillers that have caused thousands of overdose deaths to be widely sold. Plus, he says the approval process takes too long when people are suffering today. The Republican says he's heard from one constituent with multiple sclerosis who needs marijuana to be able to hold a job and support his family.

“What we’re doing while we’re trying to get everything right and take five or six years is, we’re condemning that Kentucky father to break the law, or feel bad, or leave his state,” says Nemes. “That’s not acceptable.”

Shemelya has other objections to HB 136 beyond the lack of research into the overall efficacy of medical marijuana and proper dosing protocols. He contends the bill doesn't do enough to regulate and standardize the cannabis-based products sold by dispensaries. He also says although sales may be regulated, use cannot be.

“When I walk out of this doctor’s office, I do whatever the heck I want to do with this particular drug,” says Shemelya. “The patient gets to determine the frequency that they want to dose and the level they want to dose.”

Nemes says his bill regulates usage as well as the production and potency of any cannabis medicines that would be sold in the commonwealth.

“Every single product that you would get under this bill has been tested by a safety tester to make sure that it’s legit,” says Nemes. “So at all levels, it’s protected.”

Another criticism leveled by opponents is that the cannabis derivatives will likely be too expensive for some patients to afford, especially since insurance won't cover the purchases. Shemelya says that means people will push for cheaper, unprocessed marijuana they can simply smoke.

Nemes is not opposed to smokable medical marijuana, but he says he excluded that from his bill to facilitate passage. He also acknowledges that cost will be an issue for some people, so his legislation reserves 13.5 percent of licensing fees to help cover indigent patients.

A Valid Treatment for Pain?

Medicinal advocates say marijuana can be a valuable replacement to opioids in treating chronic pain. Nemes cites a 2018 Journal of American Medical Association article based on research conducted at the University of Kentucky that associates availability of medical marijuana with lower opioid prescribing rates.

"Marijuana is one of the potential, non-opioid alternatives that can relieve pain at a relatively lower risk of addiction and virtually no risk of overdose," said HeFei Wen, an assistant professor in the University of Kentucky College of Public Health, as quoted in the report.

Mazloomdoost says pain is too complex a problem to fully conclude that marijuana is a better treatment for pain than opioids or other protocols.

“When you have chronic pain as a diagnosis, there’s so much that can go wrong with that, and we see that in many of the treatments that are currently out there,” says Mazloomdoost. “It’s an area of medical science that there’s been a vast array of misunderstanding.”

If marijuana is an effective treatment for pain, Mazloomdoost says the next challenge facing researchers would be how to determine the proper dosage that helps patients but doesn't cause other complications. Block admits little is known about proper dosing at this point. He advocates that doctors start by prescribing the lowest possible dose. If pain symptoms persist, he says the dosage can be increased by a small amount every two weeks until the pain is alleviated.

Although there are no known instances of an overdose death from marijuana use, Block says people can die from using too much – such as an impaired person having a car accident. Mazloomdoost says an overdose doesn't have to be lethal to have serious effects on an individual's mood or cognitive abilities.

Nemes says he's still considering what, if any, specific medical conditions his bill might list for treatment with medical marijuana. If HB 136 becomes law, Nemes says he thinks the first patients could be served starting in July 2021. 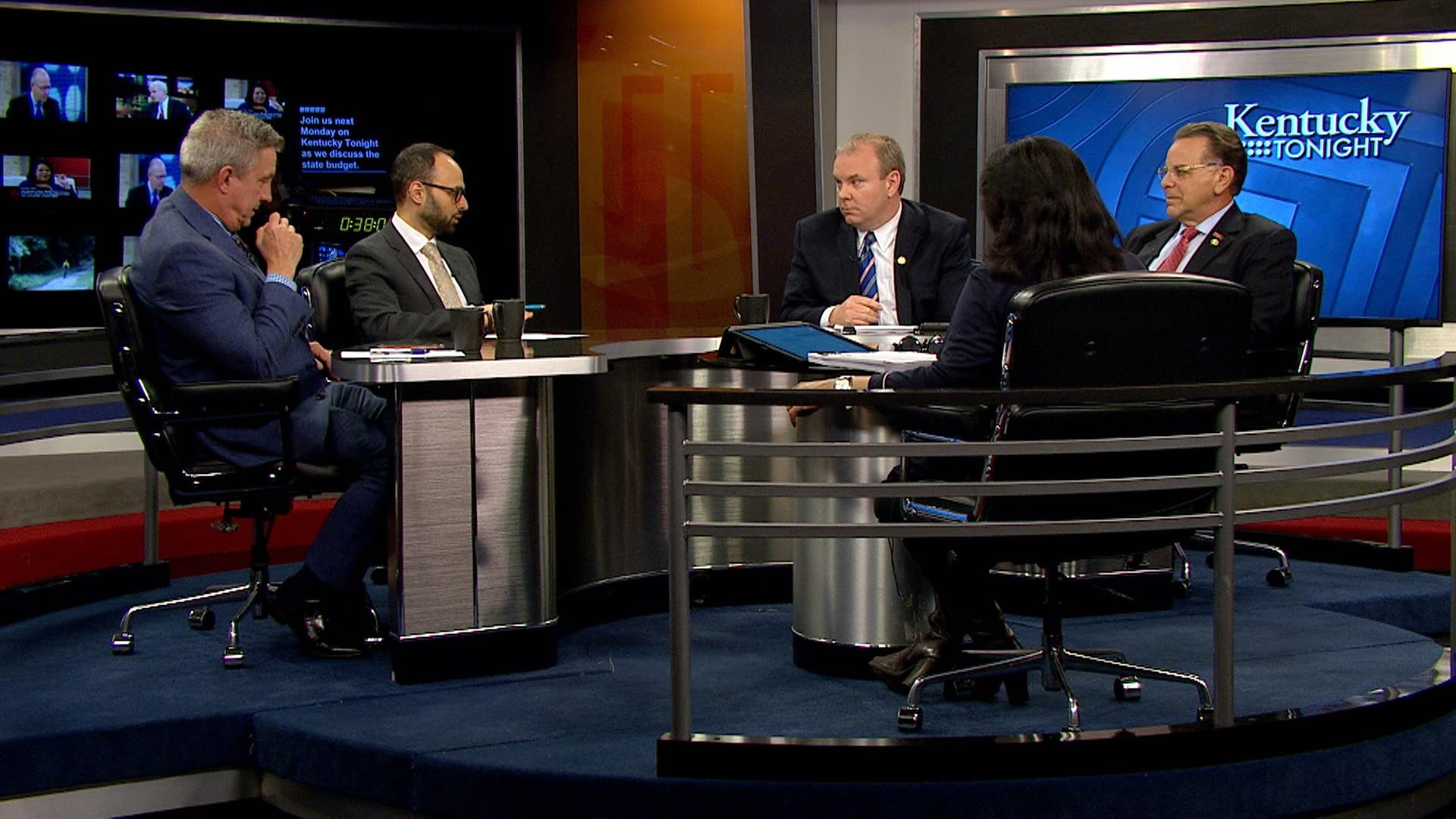