Two bills before the Kentucky General Assembly would create a highly regulated medical marijuana industry in the commonwealth and allow qualifying patients to use medicines derived from cannabis without fear of criminal prosecution.

This comes as officials at U.S. Department of Justice are renewing their commitment to enforce federal laws that list marijuana as Schedule 1 controlled substance.

What’s in the Legislation
House Bill 166 , sponsored by Rep. Sims, and Senate Bill 118, sponsored by Sen. Stephen West (R-Paris), detail how medical marijuana would be produced and dispensed to help those suffering from chronic pain, nausea, seizures, and other conditions. The Kentucky Public Protection Cabinet would issue licenses to marijuana growers and processors, as well as the facilities that manufacture cannabis products for sale, and retailers dispensing those goods.

“From the seed to the sale, it’s all tracked, it’s all monitored,” Sims says.

The legislation also calls for cannabis products to be lab-tested, consistently dosed, clearly marked, and sold in child-proof containers, according to Jaime Montalvo of Kentuckians for Medical Marijuana.

“We want to look at this like a public safety issue,” Montalvo says. “We don’t want our children getting their hands on it.”

Montalvo, who uses cannabis to alleviate muscle spasms and tremors associated with Multiple Sclerosis, says the legislation requires doctors who want to recommend cannabis to their patients to be state certified. They must also have an existing relationship with that patient.

Patients seeking medical marijuana would have to register with and be approved by the state. They must suffer from a chronic or debilitating condition such as cancer, AIDS, PTSD, Alzheimer’s, Parkinson’s, or fibromyalgia that produce severe pain or nausea, seizures, or wasting syndrome.

Sims says medical marijuana can also help calm military veterans who suffer from post-traumatic stress disorder and are at greater risk of taking their own lives.

“The suicide rate is unreal for veterans,” Sims says. “We’ve got to take care of those folks.”

The bills permit local communities to vote on whether they want to allow medical marijuana businesses to operate in their jurisdiction. Under HB 166, 80 percent of the tax revenues from medical cannabis production and sales would go to the state to fund a state department of medical cannabis administration, and 20 percent would go to back to the local communities to support their law enforcement efforts.

Both HB 166 and SB 118 are awaiting committee votes in the respective chambers.

A Debate on the Science
A 2017 report from the National Academies of Sciences, Engineering and Medicine that examined 24,000 studies concluded that cannabis and compounds derived from cannabis are helpful in treating chronic pain, chemotherapy-induced nausea, and muscle spasms from Multiple Sclerosis.

But deriving health benefits from medical marijuana isn’t as simple as lighting-up a joint. In fact, that may be one of the more dangerous ways to use cannabis, according Dr. Danesh Mazloomdoost. He says there are 64 different active medical ingredients contained in marijuana.

“The reality is you’re not getting just some medicinal products when you use marijuana, he says. “You’re also getting a lot of other products that we know are harmful.”

For example THC, the compound that creates the euphoria associated with marijuana use, can lead to increased psychosis as well as attention and motivational issues in high-concentration doses. Marijuana use by pregnant women is also associated with low birth weight among newborns.

Mazloomdoost says he has chronic-pain patients who have experienced relief after taking Cannabidiol or CBD, one of the compounds in cannabis. But he says he’s been surprised by the conditions that CBD seems to help and those it doesn’t. He says that also points to the need for more research to better understand the potential benefits and harms of these products.

“Without knowing better background science behind the medications, I think it’s Russian roulette to [make marijuana widely available] and just hope that the right patients get it and the wrong ones don’t, Mazloomdoost says.

Rep. Kimberly Moser shares Mazloomdoost’s concerns. She says she’s not opposed to allowing people to use specific compounds extracted from cannabis for legitimate medical purposes, but she says marijuana itself shouldn’t be considered a medicine because it’s not regulated by the FDA. She says smoking marijuana is far different than dosing a specific compound derived from the plant.

“We have [other] natural products, but we don’t chew willow bark for aspirin and we don’t take digitals in its whole-leaf form necessarily for heart disease,” Moser says. “So I think there’s quite a bit of work needs to be done before we legalize marijuana.”

But doing more research is hampered by the fact that marijuana remains a Schedule 1 controlled substance under federal regulations. Heroin, LSD, and Ecstasy are also Schedule 1 drugs, which means they have no currently accepted medical use and have a high potential for abuse.

Bureaucracy represents another challenge. The Drug Enforcement Agency, the Food and Drug Administration, the U.S. Department of Health and Human Services, and National Institute on Drug Abuse all have a say in marijuana research. Individuals and institutions must be registered with the DEA to study cannabis and its derivatives, and they can only use lawfully produced marijuana in their studies.

House Concurrent Resolution 34, sponsored by state Rep. Danny Bentley, a pharmacist and a Republican from Greenup County, calls on federal regulators to expedite research on the safety and effectiveness of marijuana for health purposes.

“I would be in favor of having the federal government lift those restrictions so that we can research it and actually get the science that we need,” Moser says of Bentley’s resolution. “We know that there probably are some compounds [with] medicinal qualities, we just don’t know what they are and we don’t know how to dose that.”

Legal Issues
To date, 29 states that have legalized some form of medical marijuana, including Illinois, Ohio, and West Virginia. Sims says he’s heard from hundreds of his constituents who support his bill, and he says that nearly 80 percent of all Kentuckians are in favor of legalizing medical marijuana. He contends there’s no reason to delay legalization even if federal officials are reluctant to conduct their own medical research.

“It’s time to do something in Kentucky and not be last, like we are in everything else,” Sims says

But states that have approved medicinal cannabis (as well as the nine that allow recreational use) walk a legal tightrope because marijuana remains banned under federal law. The Obama Administration opted not to challenge those states that adopted marijuana laws; it also encouraged federal prosecutors not to target people who dispense medical cannabis in accordance with the laws in their states.

Current U.S. Attorney General Jeff Sessions wants the Department of Justice to take a tougher stance on marijuana enforcement. A DOJ memorandum from January “directs all U.S. Attorneys to enforce the laws enacted by Congress and to follow well-established principles when pursuing prosecutions related to marijuana activities.” That’s brought even more uncertainty to states which have already decided to allow marijuana use, and those that are considering it.

“In January, Vermont decided to actually legalize cannabis all together,” Montalvo says. “They legalized it for citizens in Vermont to grow and to possess and consume. They did not legalize the industry – that’s what’s in question with the federal government,” Montalvo says.

Societal Concerns
In a state that’s already facing an epidemic of opioid addiction, is it wise to legalize marijuana in Kentucky, even under tightly controlled circumstances?

While she remains open to the potential benefits of medical cannabis, Moser says she opposes legalizing recreational marijuana. Moser is northern Kentucky director for the Office of Drug Control Policy and she says many recovering addicts she encounters report that they started their drug use with marijuana. She fears a full legalization would further normalize substance abuse.

“It really becomes a way of coping, and I don’t think that this is really a coping skill that we would like to encourage our children to use,” Moser says. “I’m not sure that introducing another intoxicant into our society is necessarily a good thing.”

Even with the safeguards proposed in the two medical marijuana bills, Moser fears THC levels could vary widely in the products offered at the so-called “compassion centers” licensed to sell medical cannabis. She’s also concerned that it will be too easy for individuals to get a card qualifying them to use medical marijuana products without fear of penalty.

Mazloomdoost also fears what may happen to marijuana use among young people should medical or recreational marijuana be legalized. He says scientists don’t yet fully understand how marijuana use affects the still-developing brains of teenagers. In all, Mazloomdoost says the societal costs of legalizing all marijuana use is 16 times greater than the tax revenues it could potentially generate.

While heroin may be more addictive and dangerous, Mazloomdoost says marijuana is not without risks.

“Your overdose doesn’t necessarily mean respiratory depression, not being able to breathe and therefore death [as with heroin and certain opioids], but there are some serious adverse consequences to taking an excessive amount of THC,” Mazloomdoost says.

A 2014 study in JAMA Internal Medicine found that states with medical marijuana laws had opioid overdose death rates almost 25 percent lower than other states. Mazloomdoost says that correlation may not result in causation, and it doesn’t prove that marijuana is safer, especially over the long term.

Montalvo disputes the notion that teen use would spike under a legalized, highly regulated system of medical marijuana. He says dispensary owners wouldn’t want to risk their licenses by selling marijuana to young people.

As for risk of overdose or other harmful side effects, Montalvo says thousands of Americans die each year from opioid overdoses, but he’s yet to see a single death attributed to marijuana use. 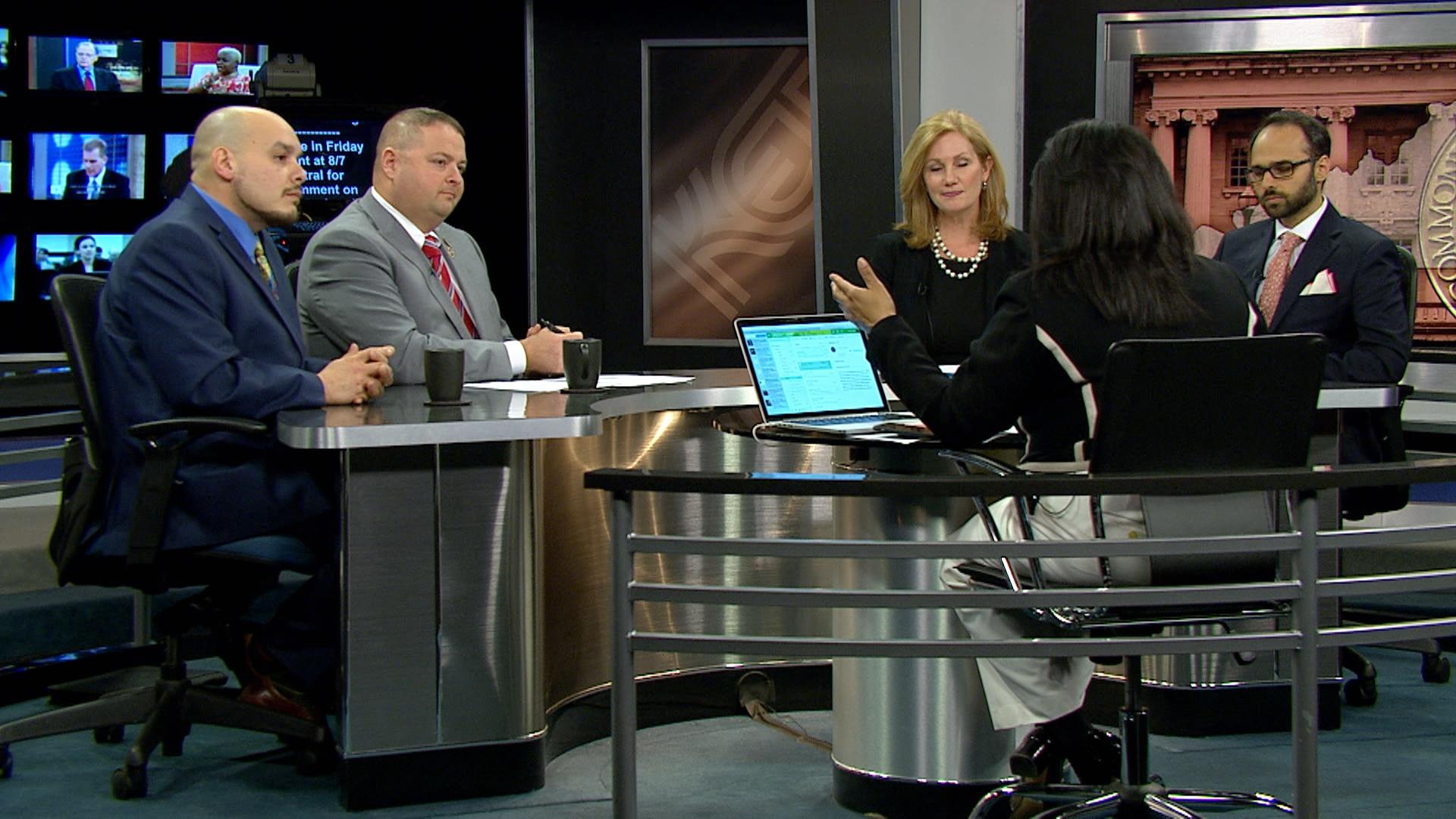