Historically, midterm elections have been bad for the party of the sitting president. Franklin Roosevelt, Ronald Reagan, George W. Bush, and Barack Obama are among the chief executives who have taken their midterm lumps.

But historical precedent doesn’t always seem to account for much in the Donald Trump era, leaving many to wonder just what will come from the voting on Nov. 6. Will Democrats storm back from their defeats of 2016 to unleash a blue wave? Or can Republicans overcome the ghosts of elections past and maintain their dominance in Washington and in Frankfort?

Trump, Kavanaugh and National Politics
You’d think a massive tax cut package, regulatory rollbacks, and a booming economy would be enough to help the GOP hold its majorities in Congress. But Tres Watson of the RPK says those accomplishments have actually contributed to a “lethargic” Republican base.

“That’s what happens when you’ve got control over all powers of government,” Watson says. “You’re happy, and you’re satiated, and you’re not really fired up to go vote.”

But GOP consultant Julia Bright Crigler says the mood of the base is starting to change.

“I will say, had you asked six weeks ago there was absolutely an enthusiasm gap,” says Crigler “I think now you see a more motivated base of Republicans to come out knowing that the Supreme Court is at stake.”

Crigler says the confirmation hearings for U.S. Supreme Court nominee Brett Kavanaugh, and the recent sexual misconduct allegations leveled against him, have lit a fire under Republicans – a fire that could turn into a firestorm if Kavanaugh fails to win confirmation, she says.

The KDP’s Cassie Chambers Armstrong says the Kavanaugh controversy is also motivating the Democratic base, especially women concerned about the accusations made against the judge by professor Christine Blasey Ford.

“If you’re accused of sexual misconduct, that absolutely speaks to your qualifications to be a judge at any level in America,” says Armstrong. “The Democratic base is as energized as it can get, and that’s a good thing. I think we are fired up as we have ever been.”

Whether that can result in a blue wave of Democratic victories remains to be seen, says former KDP chair Jonathan Miller. He says Democrats should have the advantage in November given what he sees as the controversial nature of President Donald Trump and his policies. He also says protecting health care should be a powerful issue for Democratic candidates. But Miller says a Democratic sweep still isn’t guaranteed, especially depending on how the Kavanaugh nomination plays out.

“I think at a minimum you’re going to see a pink wave,” says Miller. “I think a significant majority of women… are going to vote Democratic, from the sixth district Congressional race to our state legislative races.”

Women, Teachers Seek Office
Long before the Kavanaugh nomination, the women’s marches of January 2017 and the #MeToo movement inspired females to run for local, state and national offices.

In Kentucky, nearly 100 women competed in state House and Senate races in the May primaries. More than 70 female incumbents and challengers are on the November ballot in state legislative races. Three women – a Republican, a Democrat, and an independent – are running for Congress in the commonwealth.

Armstrong says many of the female General Assembly candidates are teachers who became politically engaged during the protests against public pension reform legislation approved by the General Assembly earlier this year.

“We have to recognize that the way the teachers have been treated in this state, and the way our governor has spoken about them, it’s all part of the same story and it’s all part of what’s driving voters to the polls in November,” Armstrong says.

At the same time though, Crigler argues the pension issue should benefit GOP candidates. She says it was Frankfort Republicans who finally had the courage to tackle the massive unfunded liabilities in the teacher and public employee retirement systems.

“For teachers, it’s the first time in decades that their pensions have been fully funded,” says Crigler, “Ultimately, that’s what people will remember in November.”

The Democrat had an early lead, which Watson attributes to the enthusiasm gap between Democratic and Republican voters. But McGrath’s advantage has shrunk, and national political observers like RealClearPolitics and The Cook Political Report now call the race a toss-up. Watson says Republicans are having success with ads that paint McGrath as too liberal for most of the 19 central and eastern Kentucky counties that comprise the district.

“She’s an outsider with the Kentucky Democrats because she’s an insider with the [Massachusetts Sen.] Elizabeth Warren Democrats,” says Watson. “That’s why she’s not going to make the finish line here against Barr.”

McGrath’s own commercials have remained positive, which Armstrong says appeals to voters who are tired of political pettiness and lies. She says the barrage of negative ads from Republicans prove that Barr is “running scared.” Armstrong says she’s not worried that President Trump carried the district by some 15 points in 2016.

Given that independent streak, Miller says he doubts McGrath would invite former President Barack Obama to stump for her even if the Democrat was popular in the district. On the other hand, Watson says a visit by President Trump would help fire up Republicans to turn out for Barr on Election Day.

Third Congressional District
Democrat John Yarmuth is seeking his seventh term as the U.S. Representative from Kentucky’s third Congressional district, which comprises much of Jefferson County. His challenger is Republican Vickie Yates Brown Glisson, the former secretary of the Kentucky Cabinet for Health and Family Services.

Watson says Glisson is the toughest challenger Yarmuth has had to face as an incumbent.

“It’s great to have such a strong candidate on the ground in Louisville because I think she’s going to perform surprisingly well,” says Watson. “I think she’s got an outside shot.”

But Watson and Crigler acknowledge that the odds are stacked against any Republican running for Congress in heavily Democratic Louisville. Miller says Yarmuth couldn’t compete anywhere else in Kentucky because of his liberal positions, but he says the Democrat will handily win re-election in the third district.

“You don’t have a chance running against Yarmuth,” says Miller. “He’s an institution in Louisville, he represents the values of Louisvillians, and he’s going to be [in Congress] as long as he wants.”

Miller adds that Yarmuth’s seniority puts him in line to be chairman of the powerful House Budget Committee should Democrats gain control of Congress.

State Legislative Races
Since winning a majority in the state House in 2016, Frankfort Republicans have faced a rancorous leadership dispute in the lower chamber as well as massive protests against their pension reform package. At the same time, they passed legislation long sought by conservatives, including a right-to-work bill and an overhaul of the state tax system, both of which they say will make the commonwealth more competitive with neighboring states.

“Given all the chaos, they were still able to put their heads down and go to work, and they were able to deliver for the people of Kentucky,” Crigler says. “We’ve seen wage growth, we’ve seen unemployment at 40-year record low, and it’s a direct result of those policies.”

She says Gov. Matt Bevin’s approval ratings and confrontational political style may hurt some Republican legislative candidates in the state’s urban districts. But she says that should be more than offset by strong GOP candidates across the state and a solid fundraising advantage for Republicans. Watson adds that state legislative races are largely driven by personal relationships, so voters can separate their personal opinions about the governor or the president from what they think about the Republican vying to be their local representative.

Even though the pension bill faces a legal challenge in state courts, Armstrong says teachers have not forgotten their anger about how the legislation was passed and the changes Republican leaders sought to make to their retirements.  She says GOP insiders underestimate the resentment that continues to linger among voters over the issue.

“I think you have a lot of Republicans that are purchasing flood insurance for a teacher-backed blue wave that’s going to wash all across Kentucky,” she says.

Armstrong contends that Democrats are poised to make gains in races in Louisville, Lexington, Henderson, and Richmond, and they stand a chance to regain control of the House. Miller is more circumspect about flipping the House, but he does believe Democrats can narrow the gap with Republicans, which he says will lead to some interesting alliances among lawmakers during the 2019 General Assembly session.

Watson says the map is against Democrats since many of the open House seats are in conservative areas of the state. He says Republicans may lose a couple of seats but should still retain their supermajority in the House. 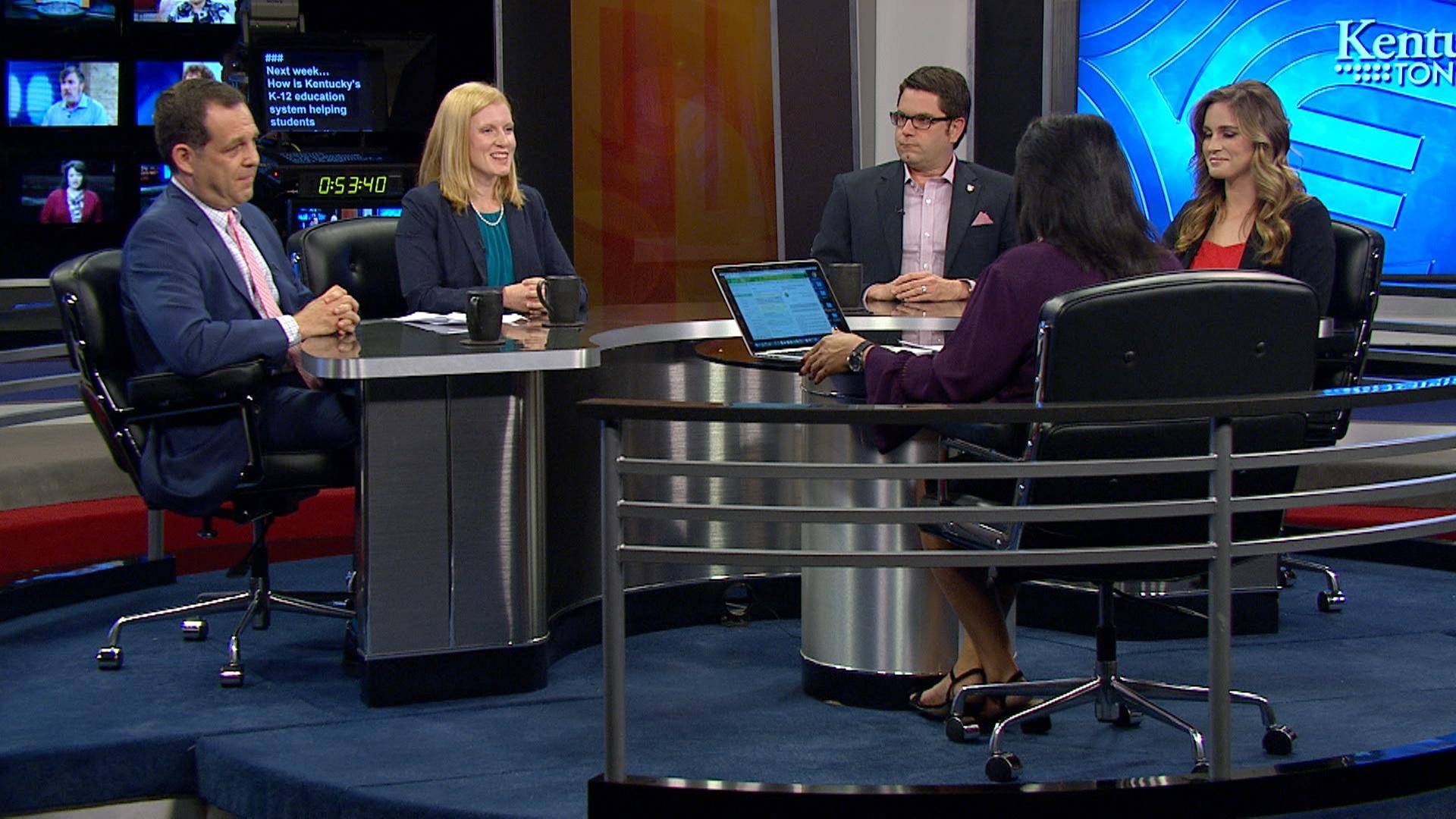