What’s on the Table in Tax Reform Negotiations?

As Gov. Matt Bevin and state lawmakers consider how to update Kentucky’s tax codes, it might be helpful to remember that we’ve been here before.

In 2005, the legislature worked with then-Gov. Ernie Fletcher to pass the most extensive changes to state taxes in more than 50 years.

“No significant progress was possible under our old, antiquated tax system,” Fletcher said at the time to describe “a system that punished the poor, stifled small business, and did little to encourage economic development and investment or to attract the entrepreneurs who create jobs.”

Four men who served in Frankfort during the 2005 tax debates appeared on KET’s Kentucky Tonight to share their thoughts about overhauling state taxes. The guests were Brad Cowgill, who was state Budget Director during the Fletcher administration; former Democratic Rep. Mike Cherry of Princeton, who was chair of the House State Government Committee; former Republican Rep. Bill Farmer of Lexington; and former Democratic Rep. Harry Moberly of Richmond, who was chair of the House Appropriations and Revenue Committee.

Back then they called it “tax modernization.”

The objective in 2005 was to create a plan that was “competitive, vital, progressive,” says former Budget Director Brad Cowgill. “We used to say our old tax code was not reliable, not fair, and not good for growth.”

The plan that lawmakers and Gov. Fletcher finally agreed on was revenue neutral. It lowered individual and corporate tax rates, closed some business tax loopholes, increased the cigarette tax, and created a tax credit for Kentucky families paying in-state college tuitions. Former Rep. Harry Moberly says that overhaul was the best tax-related work he did during his 31 years in the state legislature.

But now, the panelists say, the state faces a crisis situation. The state pension programs are mired in debts that total anywhere from $30 billion to $80 billion, depending on who does the estimates. Kentucky also faces increasing costs to cover the 440,000 people who have received coverage under the Medicaid expansion. And even with the 2005 modernization, the state tax system remains largely antiquated and fails to grow revenues as the overall economy grows.

“The current administration and the current legislature need to remember that the longer we delay this, the worse it gets,” says Cherry.

Income Versus Sales Taxes
A key tax reform goal for the Bevin administration is to move the state from a system largely dependent on income taxes to one more focused on consumption or sales taxes.

During his decade in the legislature, former Rep. Bill Farmer says he proposed that very idea. He wanted to eliminate the basic income tax and replace it with more consumption taxes, especially on services.

“We exempt a phenomenal number of services from our tax system,” Farmer says. “We don’t tax services, and by not taxing services we leave as much money on the table as we collect.”

Farmer says he would have exempted medical care and farm products, but otherwise anyone else seeking an exemption should have to make their case before the General Assembly. He also advocated for increasing the sales tax from 6 to 7 percent.

Tennessee has been hailed as a state that is thriving under a consumption tax model, but Farmer cautions that there are notable differences between the Volunteer State and the Bluegrass State.

“Tennessee taxes just about everything you can touch, including food [and] pharmaceuticals,” says Farmer.

Tennessee also allows a variety of local sales taxes, whereas Kentucky’s Constitution precludes such levies. Farmer says that gives Tennessee much more fiscal flexibility that Kentucky has. The statewide sales tax in Tennessee is 7 percent, and Farmer says local sales taxes can add up to an additional 4 percent. But he cautions that allowing local jurisdictions to set different sales taxes rates can pit one city or county against another and create headaches for businesses that cross county lines.

There’s also a question as to whether sales taxes alone would generate enough funding for the commonwealth. Cowgill says that income tax accounts for about 42 percent of state revenues. He contends suddenly switching to a system with no income taxes isn’t practical for Kentucky. Moberly agrees.

“Unless you closed every exemption that’s in the sales tax and raised a penny on the sales tax, you wouldn’t be able to come close to producing the revenue that’s produced by the income tax,” says Moberly.

Even if state lawmakers dropped the top individual income tax from 6 percent down to 4 or 5 percent, Moberly says that still wouldn’t make Kentucky any more competitive with states that have no personal income taxes. Cherry says he supports broadening the tax base, but he opposes raising the sales tax, which he argues would be regressive and be a bigger burden for poorer Kentuckians.

What Else Should Tax Reform Include?
Moberly says more sales taxes are likely a foregone conclusion for the commonwealth given that Republicans control the governor’s office and both chambers of the legislature. But he encourages Democrats to still put forth their own reform ideas, such as an earned income tax credit to help low-income working families. Moberly cautions lawmakers to not to get too caught up in ideology, and he says House Speaker Jeff Hoover (R-Jamestown) would be wise consider tax reform ideas from both sides of the aisle.

“Republicans like consumption-based taxes, Democrats like more progressive taxes,” Moberly says. “I think what needs to be done is to craft a package that can get the votes.”

Cowgill says that Republican majorities in the General Assembly don’t guarantee agreement on an overhaul plan, especially among lawmakers who don’t want to be seen as casting votes in favor of a tax hike. He says lawmakers may need some new program or project for their district to motivate them to vote for more taxes.

“Tax increases are inherently painful for legislators, and they’re particularly painful where the proceeds of that tax increase are going to be used to pay off an obligation you’ve already got,” says Cowgill of the pension debts. “There’s no sex appeal in that.”

Gov. Bevin also wants to review the myriad of exemptions that populate the state tax codes. During his State of the Commonwealth address earlier this year, Bevin said some of those long-standing sacred cows may get spared while others may get turned into hamburger. But Cowgill contends that’s easier said than done. He says that industries and lobbyists who fought hard for those exemptions won’t easily give them up. Plus, he says tax codes that have been in place for years develop their own kind of equilibrium, which influential political forces don’t want to disturb.

Cherry suggests targeting the proceeds of a specific tax increase to go toward paying down the unfunded liabilities in the state teacher and public employee retirement plans. Then when those plans reach 80 percent funding, Cherry says that tax increase should expire. He contends such a sunset clause would make higher taxes more palatable to legislators and to taxpayers.

When to Tackle Tax Reform
The governor has pledged to call lawmakers into special session to address tax and pension reform sometime after Aug. 15. But some key legislators are resisting the idea to tackle both issues at once. Sen. Chris McDaniel (R-Taylor Mill), chair of the Senate Appropriations and Revenue Committee, says lawmakers should meet in special session this year to work on pension issues first, and then wait to do tax reform until next year’s regular legislative session.

But 2018 is a budget year, and Farmer cautions that it’s hard to create a new biennial budget for the commonwealth and pass tax reform in the same regular session, which is what he and his colleagues had to do in 2005. Farmer contends lawmakers either need to create a budget and then build a tax plan to fund that spending, or they need to develop a tax plan and then decide how to allocate those revenues. Trying to do both simultaneously, he says, will only lead to nightmares.

Cowgill says he doesn’t have an opinion as to whether lawmakers should tackle tax reform in a special or regular legislative session. But he adds that debating the budget and taxes during the same regular session could offer some advantages when it comes to negotiating both plans.

Moberly contends the Bevin administration hasn’t laid enough groundwork yet to push through such a complex issue as tax reform. The Democrat suggests marrying the regular budget process with a special session on taxes.

“So much needs to be done with individual legislators and selling it to the public that I doubt it can be done in a regular session,” Moberly says. “Perhaps the best thing to do would be to take it up in the regular session and then extend on into a special session and not pass your budget until you have it all worked out.” 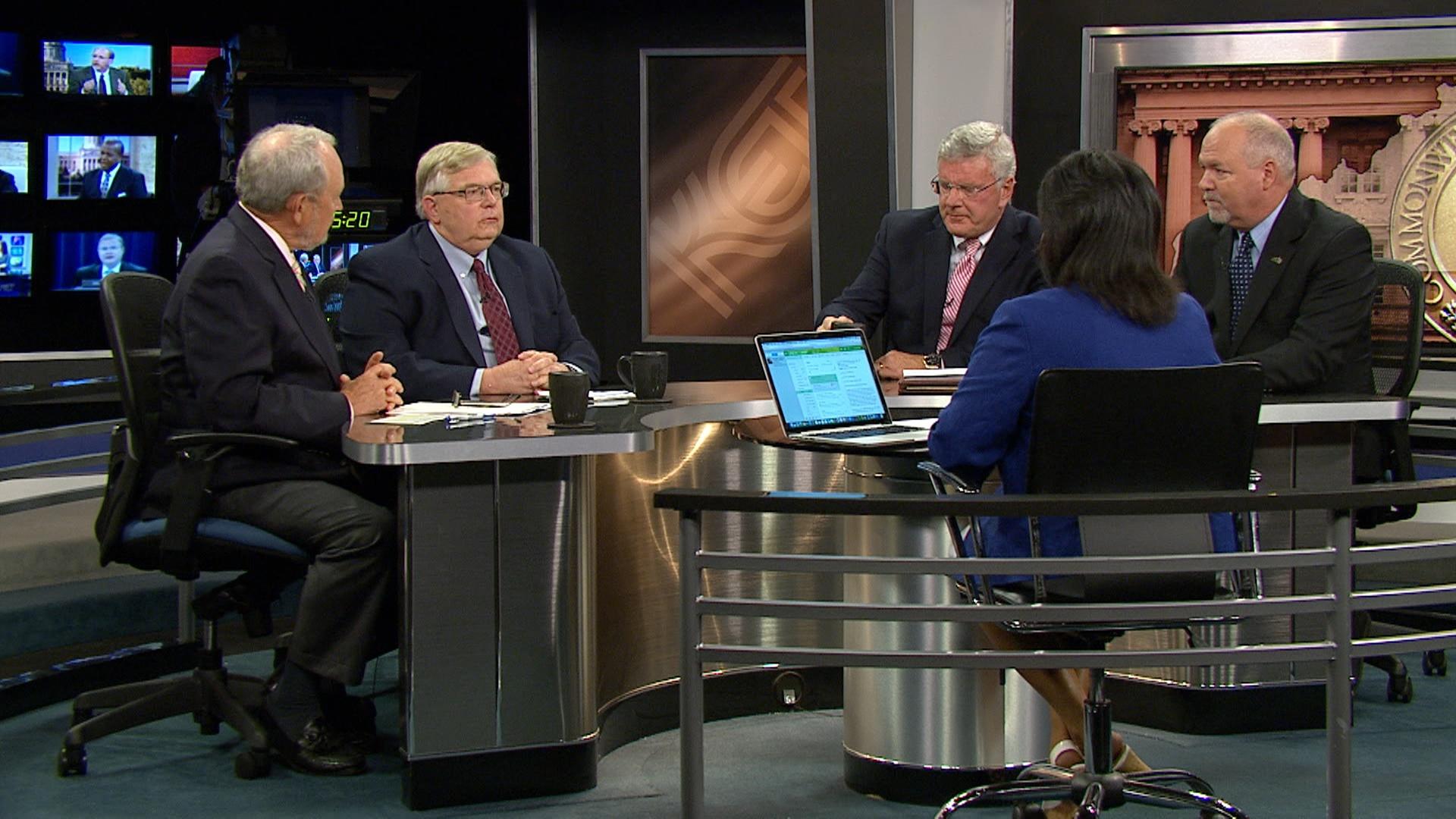