Gauging the Political Climate in Kentucky and the Nation

Tis the season of caroling, gift giving, and good cheer.

Well, maybe not this year.

This December seems dominated by debates over reforming federal taxes and state pensions, the latest sexual misconduct allegations, and the ramifications of a Senate race in Alabama.

Allegations of Misconduct by Politicians
President Donald Trump once again bucked many in his own party to endorse fellow Republican Roy Moore in his Alabama Senate race. Trey Grayson says the endorsement is another way for the president to connect with his base. But Grayson says that Trump’s embrace of the Alabama Republican accused of molesting underage girls does come with risks.

“If Moore loses, Trump’s going to look really bad – worse than if he just stayed on the sideline,” says Grayson.

Perhaps more surprising, says Matt Erwin, is the fact that the Republican National Committee reinstated its funding for Moore’s campaign after briefly stopping its support. Erwin says that could be problematic for future GOP contenders.

“Money from the RNC might in fact become radioactive to some candidates,” says Erwin, “because now you can make a credible argument that you’re taking money from the folks that financed Roy Moore’s campaign.”

Grayson and Julia Bright Crigler note the National Republican Senatorial Committee suspended its funding for Moore after the allegations of sexual misconduct against him surfaced last month. While Trump has great sway over the RNC, Senate Majority Leader Mitch McConnell controls NRSC funding, they say.

On the Democratic side, Sen. Al Franken of Minnesota and Rep. John Conyers of Michigan announced their resignations following charges of sexual harassment. Jonathan Miller and Erwin praise Democratic leaders in Congress for pushing those men out for their behavior.

On the heels of a sexual scandal that led state Rep. Jeff Hoover (R-Jamestown) to resign as Speaker of the Kentucky House of Representatives, details of alleged misconduct by another lawmaker emerged yesterday. A story by the Kentucky Center for Investigative Reporting reported allegations by a young Louisville woman who says Rep. Dan Johnson (R-Mount Washington) molested her when she was 17 years old. That led leaders of both parties, including state GOP chairman Mac Brown, to call for Johnson’s immediate resignation.

“It takes bravery for a party chair to come out and say it’s time for you to go, especially in a district that’s swung back and forth,” Erwin says. “But it’s just not enough… You have to shun these people… kick him out of the party, expel him, don’t let him be a member.”

This is not the first time GOP leaders have turned against the freshman Republican. Grayson says party officials pulled campaign funds and called for Johnson to drop out of his race last year for posting racist material on Facebook. Johnson remained in that contest, and won by 156 votes. On Dec. 12 following this program’s taping, he vowed to remain in office despite the new accusations against him.

“I’m glad to see the party’s been consistent in calling for him to either step down as a candidate or resign,” says Crigler. “These allegations are very serious… well documented, well sourced, and we’re talking about sexual abuse of a minor.”

Trump and Taxes
President Trump has scored some victories even as he continues to face criticism and questions about his alleged behavior. Grayson says the economy is stronger and will grow even faster with the regulatory relief that Trump is pushing. He says the president is also reshaping the judiciary with his federal district and circuit court appointments.

Other than the potential of passing a tax bill by the end of the year, the president’s legislative accomplishments have been slim. Crigler says Trump has had a more challenging political landscape than former President Barack Obama did at the start of his tenure. But she argues there’s still plenty of time for the Republican to score some major victories.

“When did we see most of President Obama’s hallmark pieces of legislation? It was in his second year,” says Crigler. “He had a 60-seat majority [in the Senate]. Sen. McConnell is threading the needle with 52, so I think there’s still a lot yet to be seen [from Trump].”

Not surprisingly, Democrats take a dimmer view of the president’s performance.

“What he’s accomplished so far is to take the highest, greatest office in the land and drag it down in the mud,” says Erwin, “take large swaths of Americans, made them feel small and worthless… He has no real accomplishments.”

And that will have ramifications for other GOP politicians, according to Grayson.

“It frustrates me that there’s a whole lot of really good Republicans who are being negatively impacted by this,” Grayson says. “I wish he weren’t like that.”

Instead, Grayson says Trump should strive to maintain his appeal among disaffected Americans without being divisive and demeaning.

“Hopefully he’ll show some growth over the next couple of years, but to be honest I’m not all that hopeful about it,” says Grayson. “There’s a price that we’re paying on our side for having him in office.”

Crigler says Trump’s combative, break-the-rules personality appealed to voters during the election, but that may not help him when it comes to governing. She suggests the president would do better if he stopped tweeting and focused his energies on the economy.

Once the tax debate concludes, U.S. House Speaker Paul Ryan (R-Wis.) has signaled that Republicans will next turn to cutting Medicaid, Medicare, and other safety net programs. Grayson says entitlement reform is needed because he contends the current system is bankrupting the country. Miller also supports reform, but wants a more cautious approach that doesn’t hurt the poor and vulnerable.

“Entitlement reform is needed but what scares me is the type of entitlement reform that Paul Ryan has proposed in the past and I think is going to be on the table in the coming years,” says Miller.

Looking to 2020, Grayson says a thriving economy will help Trump win re-election despite his personal shortcomings. But Erwin says Trump could face an uphill climb if Wall Street booms while working families continue to struggle.

Fellow Democrat Jonathan Miller says he’s excited about the candidates his party may field to challenge Trump in 2020. He says a younger, more diverse set of Democrats will help shape the party in exciting ways. Miller also says the Trump era could inspire a more respectful tenor to politics in the future.

“I’m hopeful that after we go through this period where we had someone who is so abhorrent, that we will be less likely to use all this hyperbole about our opponents.” says Miller. “They’re not our enemies, they can be friends that we disagree with. I’m hopeful that we’ll learn that lesson and treat each other a little better.”

Other 2018 Elections
Miller says he thinks Democrats can win control of the U.S. House Representatives next year. But he acknowledges that voting in 2018 will likely be more anti-Trump than pro-Democrat.

One seat Democrats hope to win back is in central Kentucky’s 6th Congressional district. Four Democrats have announced their intentions to challenge incumbent Republican Andy Barr.

“We have an embarrassment of riches in the Democratic primary,” say Miller of the race that includes Lexington Mayor Jim Gray, state Sen. Reggie Thomas, and political newcomer Amy McGrath, a retired Marine Corps fighter pilot.

Grayson agrees that Democrats are posting strong challengers, but he also warns that people backing outsider McGrath may feel disheartened should she lose to Gray, who is the more establishment candidate. Whoever faces Barr in the general election, Grayson and Crigler say the national media will closely watch this contest.

The picture remains bleak for Democrats running in state races in 2018. Miller and Erwin don’t expect the party to win back control of the state House, although Democrats could gain some seats.

“Democrats have a hill to climb,” says Erwin. “The party needs to be rebuilding itself… in a new, more dynamic, energetic, and inclusive way.”

Meanwhile, the state Republican Party is enjoying a growth in voter registrations.

“We continue to see, month after month, net gains for the Republicans and actually net losses for the Democrats,” says Grayson. “That means people are switching parties and it’s really striking.”

The 2018 Kentucky General Assembly
With a little more than two weeks left in 2017, time is running out for a special legislative session on state pension reform. If Gov. Matt Bevin backs away from his plan to convene lawmakers this year, that would push pension reform to the 2018 regular General Assembly session, when lawmakers are already scheduled to tackle a new state budget.

Grayson says Republicans would be in a much stronger political position had they agreed on pension reform legislation and already passed such a measure. But the original reform plan proposed by Bevin and GOP leaders proved deeply unpopular with public employees and teachers. The sexual harassment scandal involving former House Speaker Hoover and three other Republican lawmakers further delayed pension negotiations. Grayson says these developments have exposed a division in the GOP majorities in Frankfort.

“To be honest there’s tension right now inside the Republican Party,” Grayson says. “There’s a group of Republican legislators who are mad at the governor right now because the governor has been very outspoken and has called for resignations” of any lawmaker involved in the sexual harassment scandal.

While some House GOP members may be at odds, Grayson says Senate Republicans remain on good terms with each other and with the governor. Meanwhile, Miller says the rift in the GOP caucus could end up being a good thing for the Democratic minority.

“If this cleavage continues, you could see some bipartisanship stuff going on where one of the [Republican] factions teams up with the Democrats in the House,” says Miller.

Crigler agrees, saying there are opportunities for bipartisan action on things like criminal justice reforms and tax credit scholarships.

The entire Kentucky House is up for election in 2018. Erwin says that will encourage freshmen Republicans to take a more cautious approach to legislation so they won’t risk angering their constituents ahead of their re-election campaigns. 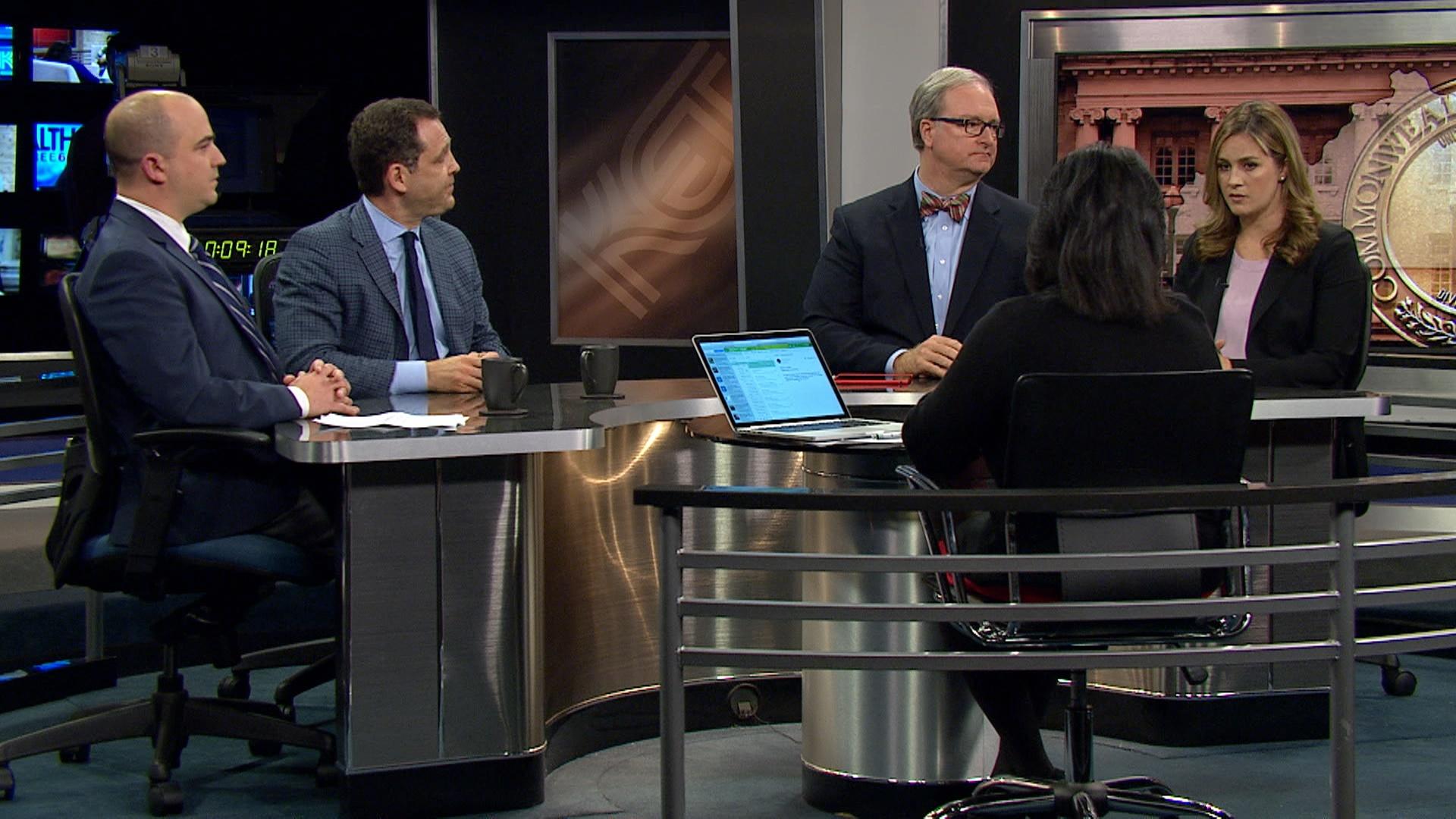