In Washington, President Trump faces low approval ratings, a series of investigations, and a penchant for letting loose on Twitter in ways that don’t always help his cause.

Here in the commonwealth, Democrats are searching for ways to rebuild their connections with working-class voters, while Republicans want to protect the majorities they worked so long to gain.

An Embattled White House
President Trump’s approval ratings are hovering between 36 and 40 percent in a number of recent polls (with approval scores in the low 40s in several others). The website FiveThirtyEight says that makes Trump the most unpopular of all modern presidents after their first six months in office.

Yet Trump’s numbers remain strong with his base with upwards of 80 percent of Republicans remaining in his corner.

“The president just has a very abrasive style and I think in many respects he’s unfiltered,” says Robertson. “To the folks in his party, that’s appreciated.”

Robertson says opinion polls don’t really matter this early in a presidency. What’s important, he says, is how voters view Trump’s achievements for the country after four years in office.

Such polarized numbers are not new. Trey Grayson says many Democrats remained loyal to former President Barack Obama even when his overall approval ratings dipped. Low numbers aren’t as much an issue now, but Grayson says if Trump’s ratings remain weak, that could pose a problem for Republicans in the 2018 midterms elections.

The ongoing Russia investigations have cast a long shadow over the Trump Administration. Robertson says if there was actual wrongdoing by the president or any of his associates, special prosecutor Robert Mueller or one of the Congressional committees will find it.

Grayson says he disagreed when the president dismissed his son’s meeting with Russian operatives as something any politician would have done to get information on an opponent. Grayson says he’s done such opposition research and he argues that taking a meeting with a foreign entity should never happen.

“I’m worried about it – it bothers me,” says Grayson. “There’s a lot of smoke right now… but it’s not at this point clear that there’s impeachable fire or presidency-ending fire.”

Don’t expect Trump to be impeached, says Mike Ward. He says the president will remain in office for at least a full term. Miller, on the other hand, says he would welcome an impeachment.

“I would love to have a President [Mike] Pence compared to President Trump,” says Miller. “Sure we’ll lose a lot of battles, we’ll lose Supreme Court seats, but I am really worried about America’s place in the world… I’m afraid there’ll be permanent damage there.”

On Capitol Hill
In the midst of the president’s struggles, congressional Republicans who have a majority in both chambers face challenges of their own.

“Right now it’s difficult to impose any kind of party discipline,” Grayson says of the GOP’s intramural differences. “It’s easier to stand unified in opposition, which Republicans were able to do really well during the Obama Administration, and it’s harder to stand unified… and get something done.”

The House barely passed a repeal of the Affordable Care Act, which saw 20 Republicans breaking ranks in the process. On the Senate side, four Republicans have now come out against the latest version of Majority Leader Mitch McConnell’s repeal-and-replace legislation, which means it could be dead for now.

Among the Republicans opposing McConnell and his bill is fellow Kentuckian Rand Paul. The junior senator has pushed his own health care proposal, saying the American Health Care Act passed by the House and the Senate’s version of it don’t go far enough in reforming health care. Miller says Paul is right on one point.

“Republicans aren’t really repealing Obamacare,” says Miller. “They’re trying to act as though they are and I think that voters can see through this. So let’s put aside this charade, and let’s get Democrats and Republicans sitting at a table [and] fix the problems with Obamacare.”

Ward applauds McConnell’s efforts to wrangle his caucus to support the Senate proposal. But he contends that disagreement among Republicans isn’t the problem with passing health care legislation. The issue, Ward says, is that it’s a bad bill that would hurt those most in need of health care while giving tax cuts to the rich.

Even though congressional Democrats have approval numbers as low as the president’s, Ward says the health care debate provides his party a chance to fight for those who could lose their health coverage.

Grayson says many Republican lawmakers wanted Congress to tackle tax reform first, which he says would have been easier to develop consensus among the GOP ranks. But President Trump made health care the priority, he says.

Even if Sen. McConnell and congressional Republicans have struggled on health care, Robertson say they have had other victories. As examples he points to rollbacks of regulations that impact coal mining, and the Senate’s confirmation of Judge Neil Gorsuch to the U.S. Supreme Court.

Traditional Media Versus Social Media
A key part of his candidacy and now his presidency is Trump’s war against mainstream news outlets. Even Kentucky Gov. Matt Bevin has sought to bypass traditional media by communicating via Facebook videos and other online posts rather than talking to reporters.

“Social media is the future,” says Robertson. “If you want to have a direct, unfiltered channel to your supporters, that’s the way you do it.”

Grayson says politicians are foolish not to use social media to connect with voters. At the same time, though, he says the president should be more judicious in his Twitter habits.

Trump’s angry Tweets have made him the “emblematic internet troll,” says Miller. Although he was an early adopter of Facebook, Miller says his initial optimism about such Web platforms has faded.

“I thought social media was going to be a godsend for politics, it was going to democratize things, give everyone a voice,” says Miller. “It did for a little bit but unfortunately it really unleashed a lot of anger and nastiness.”

Then there are efforts by the president and others to undermine the legitimacy of traditional news outlets with the moniker of “fake news.” Ward says that’s harmful to the country.

“To the extent that Americans have nothing that they feel they can rely on or believe in, including things as basic as the Associated Press, we are going down a bad path,” says Ward. “[Trump] is doing something fundamentally wrong to our free society.”

Frankfort Politics
In addition to bringing Donald Trump to the White House, the 2016 elections also toppled the state Democratic Party’s decades-long hold on the Kentucky House of Representatives. Robertson says the sweeping majorities that Kentucky Republicans won in the legislature were the result of years of hard, disciplined work by his party. He says the state GOP focused on recruiting candidates, developing its donor base among small-dollar contributors, and building a grassroots network across the commonwealth.

As for the opposition, Robertson contends Democrats fell into a trap of being too dependent on one personality: former Gov. Steve Beshear. He argues that a majority of the party’s fundraising successes relied on holding the governor’s office.

Miller agrees with that assessment and says the party must reinvent itself starting at the top. To be successful in the future, Miller says Democrats must do more than oppose President Trump. He says they must develop a coherent, unified message that doesn’t drift any farther to the left and will reconnect with working-class voters.

While he credits Republicans with a productive 2017 General Assembly session, Miller cautions the GOP not to get too comfortable. He says if nature abhors a vacuum, it also abhors one-party rule. Miller says no majority is permanent and, although it will take time, state Democrats will recover.

Tax reform could be one stumbling block to Republicans maintaining their hold on the legislature and the governor’s office. Robertson says everyone agrees that more funds must be devoted to the state’s ailing pension systems. But he adds that GOP lawmakers are uneasy about what the governor’s tax overhaul plan will actually contain.

If Bevin does outline a plan that calls for more or higher taxes, Miller says the governor risks unleashing the far right wing of the GOP against him. He says increasing revenues is the right thing to do, but it could make the governor politically vulnerable when he’s up for reelection in 2019. 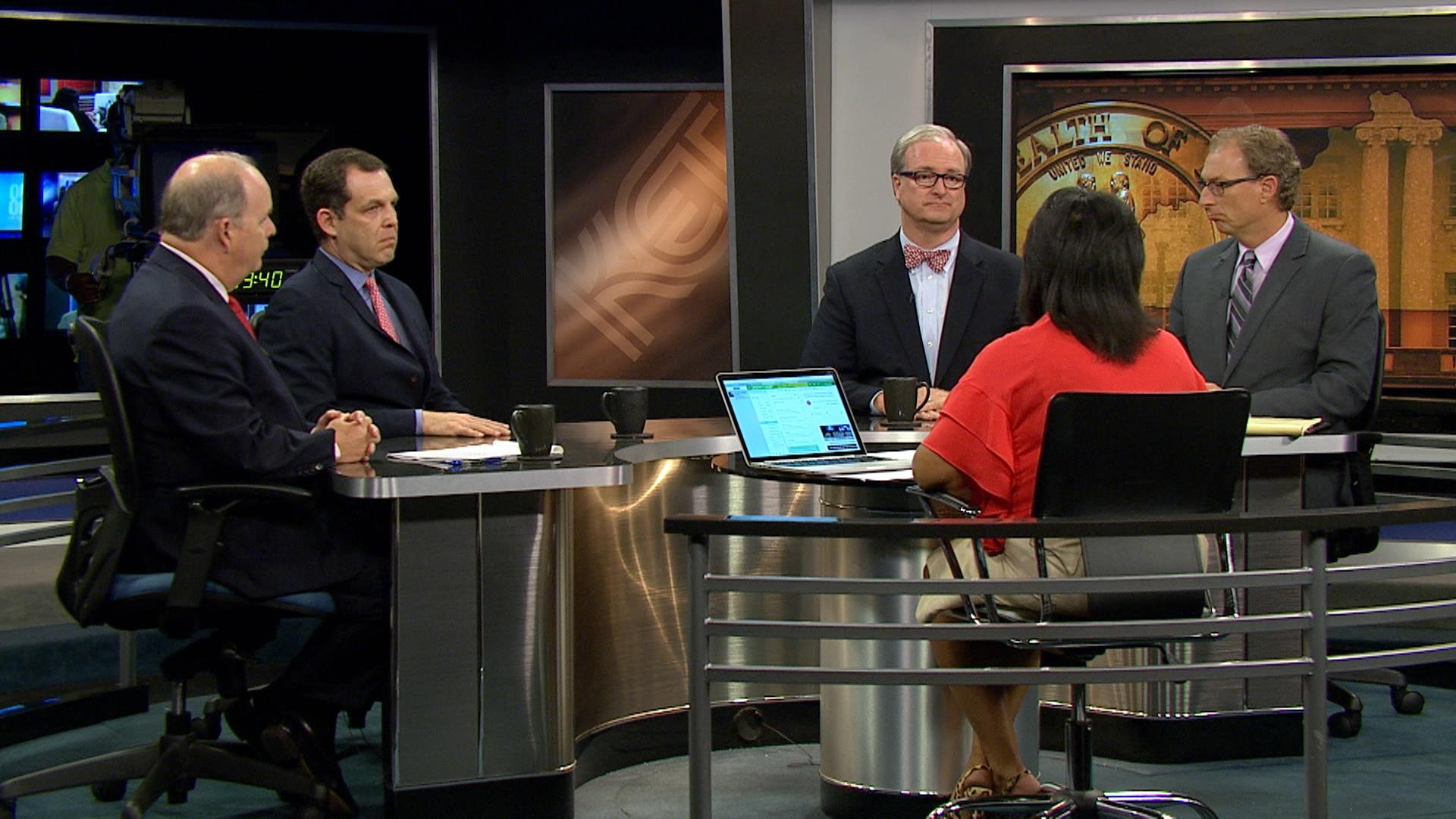