Debate Intensifies Over the State Budget

There’s little doubt in Frankfort that the state must put significant money towards the failing public pension systems in the next budget cycle.

But while lawmakers can agree on that point, the real debate begins over how much money to allocate, where will it come from, and what other sectors of state spending will take a hit in the process.

A ‘Fiscally Responsible’ Approach
The spending plan presented by Gov. Matt Bevin allocates about $1 billion to the public employee and teacher retirement systems over the next biennium. His budget also maintains basic funding for K-12 education and Medicaid, and provides modest increases to several line items, including pay raises for social workers as well as state police and correctional officers.

Every other area of state government from higher education to health and human services would face 9 percent cuts under Bevin’s proposal. Overall the plan would trim about $650 million of spending.

“I think it’s the most fiscally responsible and conservative budget we’ve seen in a over a decade in this state,” says Dave Adkisson.

The Kentucky Chamber president calls Bevin’s budget a “game changer” and credits the governor with going far beyond his expectations to address the massive pension debts. Sen. Chris McDaniel adds that the spiraling costs of Medicaid payments and the retirement systems now consume nearly a third of the state spending.

“The citizens of the commonwealth are on the hook for $38 billion in unfunded pension liabilities,” says Sen. McDaniel. “It has and will continue to squeeze every other sector of government.”

Where to Invest Limited Dollars
Since the 2008 recession, the state budget has been cut multiple times, totaling some $1.7 billion. Adding another 9 percent in cuts to most state agencies in the new biennium simply goes too far, according to Jason Bailey of the Kentucky Center for Economic Policy.

“That weakens the systems that we need to prosper,” Bailey says. “At a time when many states are beginning to reinvest in education and human services and the things that have been cut through the recession, Kentucky is still looking at more cuts in this budget.”

Bailey questions why Gov. Bevin wants to stash about $1 billion in reserve funds instead of putting that money towards the pension liabilities, which he says would free up dollars for other line items.

Members of the House and Senate budget committees are hearing testimony from state agencies, university presidents, and concerned citizens about the possible impacts of Bevin’s budget plan. Rep. Tommy Thompson says more than 60 House members sit on the various budget subcommittees that will help craft the lower chamber’s version of a spending plan. He says he wants a budget that strikes a better balance between addressing the pension systems and ensuring future prosperity for the commonwealth.

“The budget not only is the state’s number one policy document, but it’s [also] a priority document,” Thompson says. “I think we’ve got to invest the limited dollars that we have where we get the best return.”

Challenges for Higher Education
The panel agrees that one of those investment priorities is education. The governor’s budget does maintain so-called SEEK funding for K-12 schools, and provides a slight increase to allow for student population growth over the next two years. But other public school services will face spending cuts. Thompson says preschool, family resource and youth service centers, textbook funding, and other vital programs stand lose $90 million in the new budget period.

The 9 percent reduction will also hit the state’s public universities and community colleges. The presidents of the Universities of Kentucky and Louisville, the Kentucky Community and Technical College System, and other institutions have all warned of additional tuition increases should the proposed budget cuts stand.

Jason Bailey says the state used to have relatively affordable higher education opportunities. But he says after multiple funding reductions since the recession, state schools have raised their fees to the point where the Kentucky now has the highest tuition among community colleges in the Southeast. Bailey contends that raising tuition rates is, in effect, a tax increase on students.

Sen. McDaniel criticizes higher education officials who automatically say that a reduction in state funding means they have to charge their students more. He says over the past decade, per-pupil funding to the state’s colleges and universities has decreased by 26 percent, but tuition has increased by 43 percent.

In that same time period, McDaniel says financial aid has increased and school endowments have grown significant bigger. The senator contends the spending at Kentucky’s postsecondary institutions should be thoroughly reviewed. He applauds Gov. Bevin’s call to transition higher education to a funding model based on meeting certain performance-based criteria.

Workforce Training
The largest new investment that Gov. Bevin included in his budget was a $100 million bond issue to increase job training for Kentuckians.

“The governor built his budget around pensions but a strong theme is workforce development,” says the Kentucky Chamber’s Dave Adkisson.

He praises the move that will expand existing career and technical training programs, and build new facilities to give students greater access to the latest equipment and technologies.

Rep. Thompson says the state’s community colleges are perfect places for these new programs, which is why he hopes KCTCS funding won’t be so dramatically reduced. He says workforce development is ripe for public-private partnerships, where companies can match state and local funds to create training opportunities that can benefit businesses, students, and communities.

“We need more of that investment now more than ever to bridge the gap between where the jobs are and where the skills aren’t so that we can allow people to have the skills to be more employable,” Thompson says.

The governor also wants to divert Kentucky Lottery proceeds that are traditionally earmarked for needs-based scholarships and put them towards workforce training scholarships. Bailey says he’s yet to see specifics about who would benefit from that money, but he fears that low-income students may be at risking of losing out on much needed scholarships for college.

Ways to Boost State Revenues
With all the cuts that have been proposed, Bailey wonders why there’s no movement to address the revenue side of the state budget. He says Kentucky collects about $10 billion in taxes, but loses about $12 billion in various corporate and individual tax exemptions. Bailey contends a cost-benefit analysis of those policies is long overdue.

“We don’t actually have that argument very often in Kentucky where we compare the value of some of these tax breaks to the investments in education, to investments in human services, and other things that we pay for through the budget,” says Bailey.

He adds that tax reform wouldn’t have to be comprehensive, but could be tackled through smaller bills that address specific items. For example, Bailey says the 2013 pension reform effort included legislation to raise some revenue to put toward the public employees retirement plan.

Sen. McDaniel says legislators must be careful with any tax policy that could push business to neighboring states since about two-thirds of the commonwealth’s population lives in a border county. He says he opposes an idea to raise the sales tax for a limited time, even if all the proceeds went toward the retirement system debts.

Both McDaniel and Rep. Thompson say they see little interest among their colleagues to pursue expanded gaming this session, although the idea has frequently been mentioned as way to boost pension funding. And Thompson says he is also very leery of proposals to legalize marijuana as an alternative revenue source. 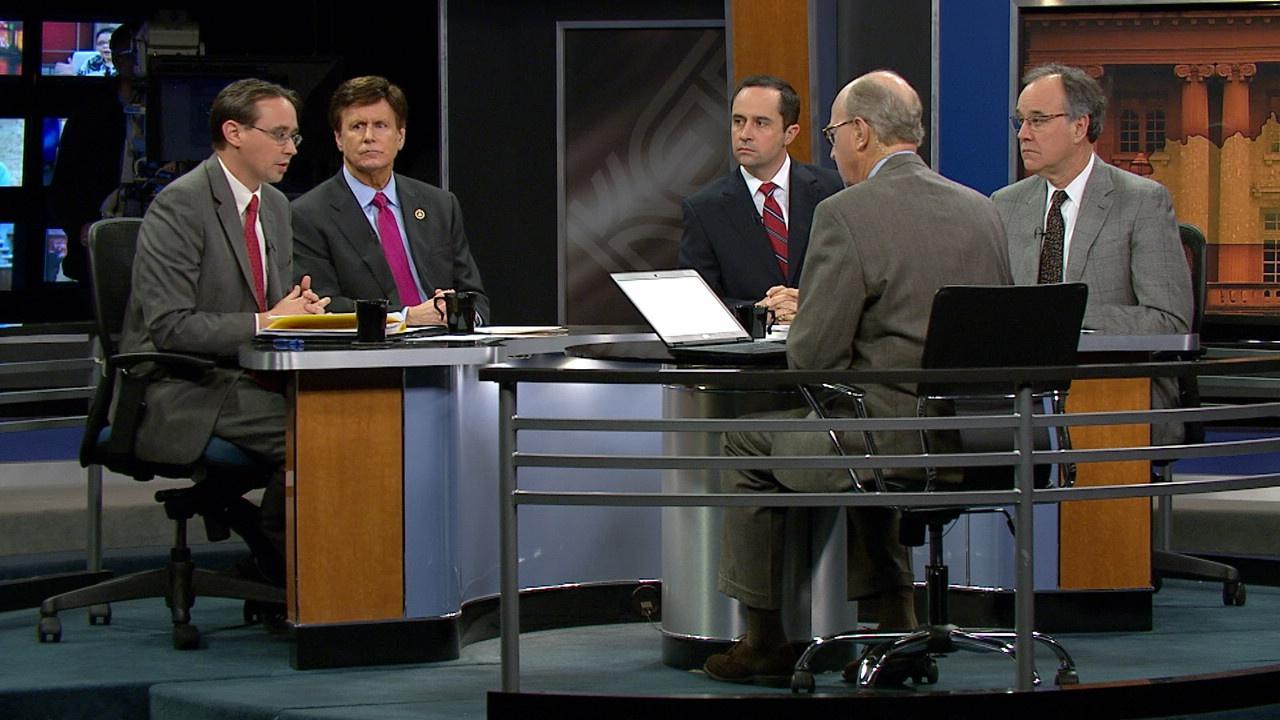