Dr. Vaughn Miller was a University of Kentucky basketball fan who loved 1970s music and corny jokes. The Elizabethtown chiropractor and father of two daughters and two stepsons was active in church mission work and a devoted “band dad.”

“It just doesn’t feel real yet,” says Miller’s daughter, Sarah Lemp. “We didn’t really get to see dad grow old – we thought he was going to be around another 20–30 years.”

Miller came down with flu-like symptoms in mid-August, as the Delta variant of COVID was surging through the commonwealth. After testing positive for the virus, he thought he could ride it out at home, according to Lemp. Then his oxygen levels dropped. He was hospitalized and placed on a ventilator. Within days, he was dead.

Lemp says her stepmother also developed COVID and she too wound up in the hospital. She has been released and is continuing her recovery.

Neither Miller or his wife were vaccinated.

“Based off the information they had heard either through news, or Facebook, or family or friends, they decided that it wasn’t enough information to determine that it was safe enough to get,” says Lemp. “So they chose not to get it.”

A recent survey by the Foundation for a Healthy Kentucky found that 90 percent of Kentuckians believe vaccinations are a good preventive health strategy.

But when it comes to the COVID vaccines, people seem far less convinced. To date only about 53 percent of Kentuckians are fully vaccinated; 61 percent have received at least one dose of either the Pfizer or Moderna vaccines. In some Kentucky counties, more than 60 percent of residents are vaccinated, in others the percentages remain in the 20s. Health care providers say the unvaccinated comprise the vast majority of patients who are hospitalized with the virus.

“The COVID vaccine is considered new,” says Allison Adams, vice president for policy at the Foundation for a Healthy Kentucky. “The confidence in the vaccine is not there as much as it is with our consistent vaccines that we have with measles, mumps, rubella, shingles, chicken pox, those that are common vaccines.”

Although the vaccines are new, the Messenger RNA (mRNA) technology the Moderna and Pfizer medicines are based on has existed for decades. Physician and state Sen. Ralph Alvarado (R-Winchester) says a Hungarian researcher first developed mRNA technology in the 1980s. Still, he says he understands why people would have questions about the vaccines.

“Skepticism’s okay, it’s okay to have questions,” says Alvarado, who is chair of the Senate Health and Welfare Committee. “If you’re nervous, if you have questions… go ask the people you trust in health care to answer those questions for you.”

Even though mRNA was developed years ago, Sen. Karen Berg, who is a radiologist with U of L Health, says researchers were waiting for the right circumstance to use it. COVID provided that opportunity. The result, she says, is a vaccine that could be safely deployed in record time – in months rather than years.

“It’s not because we rushed the process, it’s because we were prepared for this,” says the Louisville Democrat.

But misinformation on social media and other venues stymied the rollout of the vaccines, and soon the issue became politicized. Alvarado contends resistance could’ve been minimized if the initial messaging had come from doctors and nurses rather than politicians and government bureaucrats.

But even a trusted physician can encounter vaccine hesitancy. Dr. Alice Thornton, chief of the Division of Infectious Disease at UK Healthcare, says she has an immunocompromised patient she’s seen for two decades. She says this individual had embraced new treatments in the past, but when she encouraged them to get a COVID vaccine, they resisted.

“You’ve read the data and you understand the scientific concept… but that is just wiped off the table,” says Thornton. “That just blows me away.”

The fact that the vaccines were deployed so quickly should be considered a victory, not a cause for concern, according to Thornton. She says just because breakthrough infections occur in fully vaccinated individuals doesn’t mean the vaccines don’t work.

“You still may get infected, but… the vaccines are really designed to prevent hospitalizations and death,” says Thornton.

For those who still are reluctant to take one of the mRNA-based vaccines, Alvarado recommends the one-dose Johnson & Johnson vaccine, which he says employs more traditional technology that relies on a disabled virus to generate an antibody response.

“Some people think I’ve had the infection, I’m okay, I’m protected,” says Alvarado. “Maybe you’re protected… A lot of it comes down to your neutralizing antibody level.”

Neutralizing antibodies defend cells from pathogens such as COVID. While the virus does generate an antibody response, Alvarado says it’s uncertain how large the response is in any particular patient and how long they are protected from reinfection. He says some studies indicate natural immunity might last as long as eight months.

Instead of simply relying on natural immunity, Alvarado encourages people who have had COVID to also get vaccinated. That’s the situation he faced in late 2020. He had COVID in November, but then got the Pfizer vaccine when it became available at his health care facility. Now he’s taken the booster shot.

“All it does is it just really ramps up your antibody level, so you’ve got a lot of protection,” Alvarado says.

Berg says data from Pfizer and from studies in Israel indicate that people who have natural immunity plus a vaccination have much stronger immune responses than what is provided by the natural infection alone. But she also has this warning:

“Do not go out and get infected to plan to boost your immune response because that is a very, very dangerous thing to do,” says Berg.

Although the elderly and people who are immunocompromised or have other significant underlying health conditions are generally believed to be at greater risk of severe COVID, that’s no guarantee that healthier individuals can’t also face dire consequences.

“People have this idea that only the very sickest in our population are dying from this virus and that’s just simply not true,” says UK Healthcare Emergency Department Charge Nurse Meg Pyper. “We are intubating 20-year-olds, perfectly healthy, normal people.”

In a YouTube video, Pyper recounts losing an otherwise healthy middle-aged man to the virus. Even among survivors, she says COVID ravages patients and can leave them needing organ transplants to fully recover.

“The effect that this one virus has on the human body is astronomical,” Pyper says.

A Treatment That’s More Experimental That the Vaccine

Some among the vaccine hesitant believe if they do get infected, they can simply get a monoclonal antibody treatment and be cured.

But Berg says that approach is problematic and highly risky. Not only is the patient exposed to potentially life-threatening outcomes from having the virus, she says there is a narrow window of time when monoclonal antibodies can be administered. She also says supplies of the treatment are limited.

“Last week we didn’t receive a single dose in this state,” says Berg. “This week we’re catching back up but this is not something you can rely on.”

Alvarado notes the irony of people who resist getting one milliliter of vaccine injected into their arm yet they will welcome having a whole bag of experimental antibodies created in a laboratory pumped into a vein. Plus, he says COVID shots typically cost about $35 while a monoclonal antibody infusion can run as much as $3,000. He says the risks associated with getting COVID and developing natural immunity or being cured by the experimental monoclonal treatment are far greater than any risks connected to one of the vaccines.

Allison Adams of the Foundation for a Healthy Kentucky says the far more sensible option is to get the vaccine that will help prevent a potentially deadly infection in the first place.

Optimism for the Future

When Sarah Lemp’s father became one of the nearly 9,000 Kentuckians to die of COVID, she pledged to share his story wherever she could. She’s also encouraging people who have been affected by the virus to wear a black and green ribbon.

“The black represents the mourning of a loved one, and then the green represents the other families out there who have lost people to COVID,” she explains. “[It’s] to show this this is real and this is devastating.”

For people like her parents who decline to get vaccinated, Lemp wants them to take other steps to protect themselves and their family and friends.

“Wear your mask when you go out. If you’ve got any plans coming up where you’re going to be in large crowds, cancel them,” Lemp says. “We can have fun after all this horrible virus is over.”

The U.S. Food and Drug Administration is expected to provide updates soon on potential booster shots for those who received the Moderna and Johnson & Johnson vaccines, as well as on whether the Pfizer vaccine will be approved for use in children. Initial reports on the efficacy of a new COVID pill from pharmaceutical company Merck were positive, but the timeline for its approval is uncertain.

At the same time, billions of people around the world remain unvaccinated and the virus continues to mutate. Thornton says that means there’s much we still don’t know about the future of COVID.

“Be nimble as we work through this,” she says. “Be willing to hear information and realize we might know something today or we might not, but we may know more tomorrow or the next day.”

The current surge of the Delta variant finally seems to be easing in Kentucky as new case numbers and positivity rates continue to slowly decline. Meanwhile the vaccination rate is gradually increasing, all of which gives Adams reason to be optimistic.

“If we continue to maintain the safety measures and continue to keep raising the number of Kentuckians getting vaccinated, we’ll be prepared for whatever comes next,” says Adams. 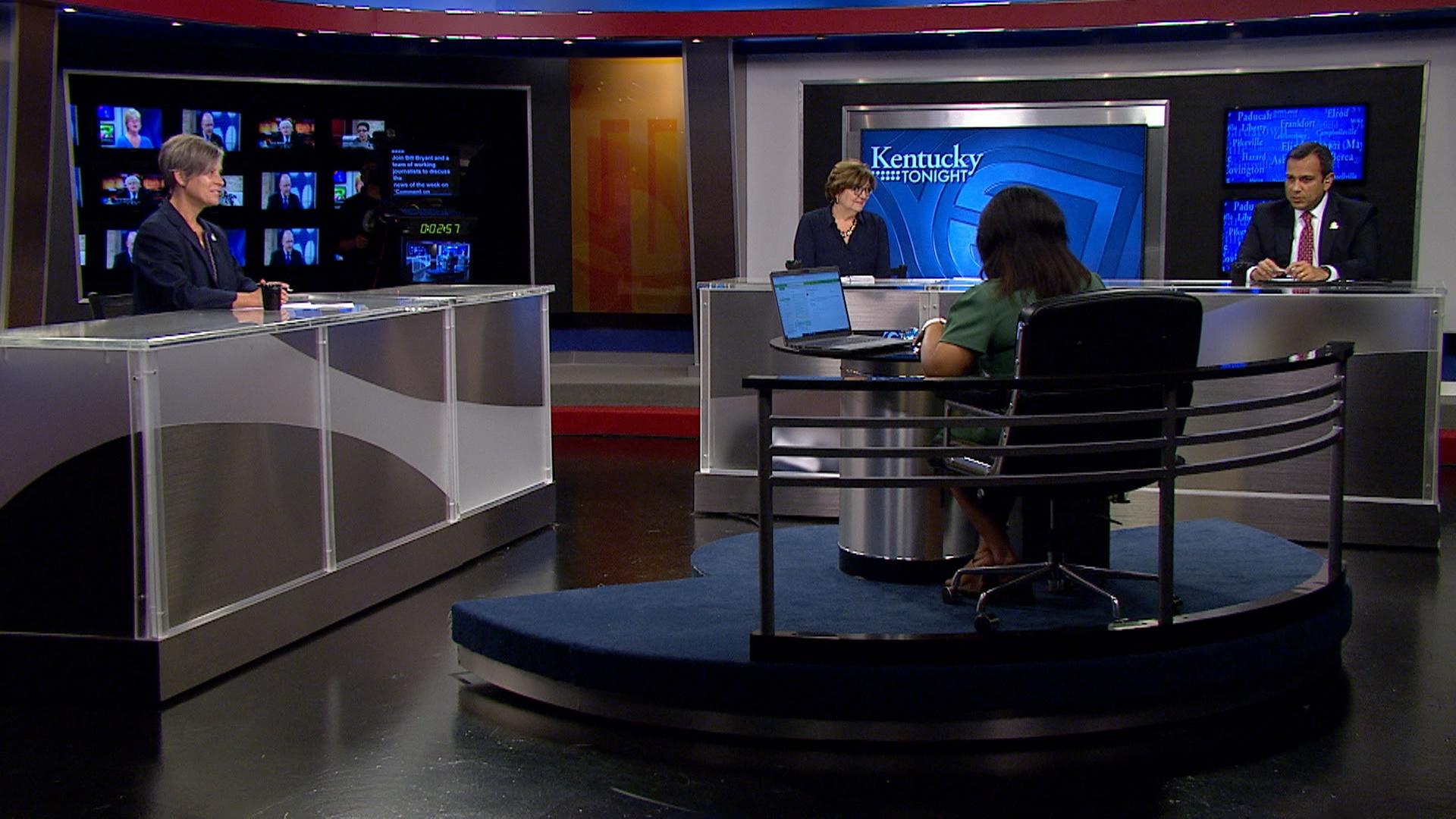