In just five days last week, state lawmakers passed seven bills and delivered them to the governor for his signature. If the wheels of government normally grind at a slow pace, the legislature surely set some speed records in the opening days of the 2017 General Assembly session.

Fast or Too Fast?
In odd-numbered years in Kentucky, 30-day legislative sessions take place and are broken into two parts: a week in early January that’s generally reserved for organizational tasks, followed by the remaining days in February and early March to pass bills.

House Speaker Hoover says members of the new Republican majority in the chamber decided they wanted to set a different tone this year and pass legislation right from the start.

“It was a fast-paced week, there’s no question about that,” says Hoover. “[It was the] first time in history that bills have passed both chambers during the first week of an organizational session.”

Most of the legislation approved last week involved issues that have long been debated at the capitol, such as right to work, repeal of prevailing wage, and limits on abortions. Sen. Givens says those previous discussions along with interim committee work on the topics helped facilitate faster approval this time around.

“I do think the pace was vigorous but the needs of Kentuckians are real,” says Givens, “and we’re elected to address those needs.”

But the fast pace was unsettling to House Democrats who are still getting used to their new minority status in the chamber where Republicans dominate 64-36.

“For seven bills to pass in five days is, in my opinion, too speedy, especially for the new members and for those of us who have even been there,” says Rep. Adkins. “For you to be able to do that… you basically have to suspend the rules of the House.”

Adkins says lawmakers had limited time to review and debate complex bills they were asked to vote on and the public had inadequate time to comment on the pending legislation. He and Sen. Jones also bemoan how union members were prevented from attending committee discussions on right to work legislation. The senator adds that convening the rare Saturday session cost taxpayers upwards of $70,000 for extra security details and overtime pay for legislative staff.

“This was basically a political stunt,” says Jones. “These were agenda items that have been laid out by the governor and the Republican leadership and they were going to fulfill their obligations to cooperate America.”

Hoover contends the Saturday work involved no overtime or other additional expenses. He says anything Republicans did procedurally to speed bills to final passage, the Democrats have done hundreds of times in the past. The speaker says the pace will remain brisk when lawmakers return next month, although probably not as fast paced as it was last week.

A New Board for U of L
In addition to legislation to make Kentucky a right to work state, repeal prevailing wage requirements, and limit abortions, lawmakers also passed a measure designed to resolve governance issues at the University of Louisville. The school’s board of trustees has been the focus of an executive order by Gov. Matt Bevin to restructure the body and a court battle to reverse that action.

Senate Bill 12 abolishes the old 17-member board of trustees at U of L, and replaces it with a new 10-member board, as Bevin originally wished. The legislation requires the Council on Postsecondary Education (CPE) to provide a list of 30 candidates from which the governor will nominate 10 people. The Senate would then confirm the governor’s nominees so as to ensure proper racial and political diversity among the trustees. The existing board will remain in place until the Senate confirmations are completed.

“We cannot forget what precipitated the situation,” says Hoover. “It was a 17-member board that all of us would have to recognize and admit was illegally constituted, thanks to eight years of [former Gov.] Steve Beshear: 17-member board with 17 Democrats and no Republicans, clear violation of the law, something had to be done.”

Opponents fear that SB 12 — like Bevin’s original executive order — could further endanger the university’s accreditation. The Southern Association of Colleges and Schools (SACS) has already placed U of L on a one-year probation because of concerns of undue political influence surrounding the governor’s restructuring attempt and the resignation of former university president James Ramsey.

Givens says SB 12 removes concerns of political influence by having the legislative body oversee a governor’s selections. He contends the bill was necessary to remove the cloud of uncertainty that now hangs over the university and hinders it from getting good candidates to serve as the new school president.

Jones is highly critical of SB 12. He says the legislation started as a bill to address dog bite liability, but was transformed into a U of L board overhaul without any consultation from the five Democratic senators who represent Jefferson County, where the university is located. But he’s even more condemnatory of a new bill filed late Saturday that would give the governor greater control over all state university boards.

New Bill Seeks to Ensure Proper Board Balance and Functioning
Senate Bill 107 would allow a governor to remove a single member or entire boards of state universities, the state board of education, and the CPE. The governor can do that based on his or her decision that the member or members are not holding regular meetings, electing a chair, reaching consensus, or other standard constitutionally mandated board functions.

“The governor could arbitrarily and capriciously remove any member of any board for any reason, basically saying they’re not doing what I want them to do and therefore I think it’s dysfunctional,” says Jones about SB 107, which he calls “a major power grab.”

Under the legislation board members would have to be appointed based on political representation that is proportional to state party registrations. Adkins says the bill also provides no recourse for appeal by the impacted institutions.

“It allows the governor to be the judge and the jury,” says Adkins. “If this bill would pass as written, it’s my opinion that the accreditation of every university in Kentucky would be in jeopardy, and I’m fully convinced of that.”

In crafting the measure, Senate President Robert Stivers (R-Manchester) sought to ensure proper functioning and political and racial balance among the boards, says Givens. He says determining correct balance is easy, but admits that proper functioning is tougher to legislate.

“Sometimes dysfunction is not such a bad thing,” says Givens. “We’ve got to be careful about how we do define function and dysfunction and that due process component… for the removal of board members.”

Givens says SB 107 will undergo lengthier deliberations than did SB 12 for the U of L reorganization. Hoover says he has not yet read SB 107 and is not prepared to comment on it.

Other Legislation
Abortion was the one social issue that lawmakers tackled in the opening days of the session. They passed a bill to ban abortions after the 20th week of pregnancy, and a measure to require women to undergo an ultrasound and hear their baby’s fetal heartbeat before having an abortion. The American Civil Liberties Union has already filed suit to block the ultrasound law, but Hoover says he believes the measure is constitutional and he says it’s what the people of Kentucky have demanded.

Despite protests from organized labor, the legislature passed a so-called right-to-work law that removes requirements that employees join or pay dues to unions that operate at their places of employment. Lawmakers also repealed prevailing wage laws that have set pay scales for trade laborers working on certain public works construction projects.

Givens says making Kentucky a right to work state will bring more job opportunities to the commonwealth. He says as more people are employed, more revenues will flow into state coffers to help fund other pressing needs. Adkins and Jones say Democratic legislators stood firmly against both measures because they argue the bills will result in lower wages for blue-collar Kentuckians and their families. Jones also says the repeal of prevailing wage will allow out-of-state contractors to employ undocumented workers to build construction projects in the commonwealth.

Finally lawmakers passed a bill that would make the pension benefits of current and former legislators available for public review. Hoover says he expects the legislature to take up other public pension transparency measures when the General Assembly reconvenes in February or during a special session later this year.

Another issue that’s expected to come before the House and Senate this session is medical review panels. Jones contends there is no litigation crisis in the commonwealth, and that enacting review panels to decide which health care liability lawsuits can move forward will be expensive and create unnecessary bureaucracy and red tape. Hoover says the House never took up the issue when it was under Democratic control, so he’s looking forward to having committee hearings on medical review panel options.

Lawmakers will likely also consider legislation to move the elections for Kentucky’s governor and statewide constitutional officers to presidential election years, further measures to address the state’s drug addiction epidemic, restoration of voting rights for nonviolent felons who have completed their punishments, and performance-based funding for public universities and community colleges. 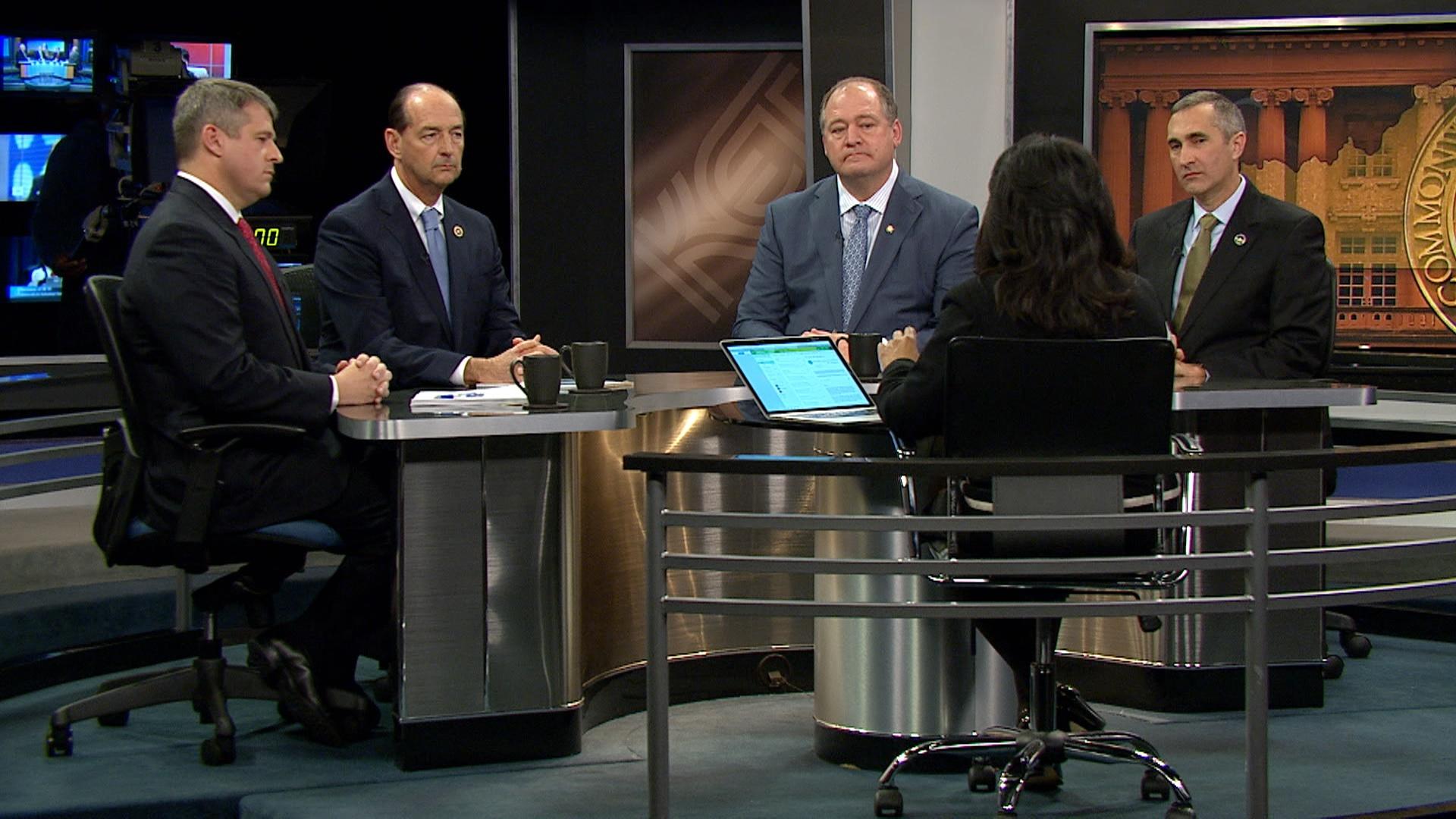