Continuing the Debate Over Sports Wagering in Kentucky

If a bipartisan group of Frankfort lawmakers is successful, Kentucky would become the ninth state in the nation to legalize betting on sports events. Advocates of House Bill 175 say the measure could bring millions of new revenues into state coffers, and provide funds to help those who have a gambling addiction.

But the odds may not favor the legislation, which faces stiff opposition from a range of groups that are concerned about how such wagering could impact families and increase costs to society.

KET’s Kentucky Tonight discussed HB 175 and sports wagering with Rep. Adam Koenig (R-Erlanger), chair of the House Licensing, Occupations, & Administration Regulations Committee, and sponsor of the measure; Rep. Al Gentry (D-Louisville), a co-sponsor of the legislation; Kent Ostrander, executive director of the Family Foundation of Kentucky; and Rev. Hershael York, senior pastor at Buck Run Baptist Church in Frankfort and dean of the School of Theology at The Southern Baptist Theological Seminary.

Details of the Proposal
Betting on athletic competitions has been illegal in much of the United States for decades. But a U.S. Supreme Court decision last year cleared the way for states to legalize wagering on sporting events. To date, eight states, including West Virginia, have already approved sports betting. Legislators in five more states are considering it: Kentucky, Missouri, Ohio, Tennessee, and Virginia.

Rep. Koenig’s House Bill 175 would allow Kentuckians 18 years and older to place sports-related bets at the state’s horse tracks or at the Kentucky Speedway. Bets could also be placed via a mobile app that people can acquire at one of the tracks or the speedway. (Mobile-app bets could only be placed within the boundaries of Kentucky.)

Patrons could place bets on the outcomes of specific athletic contests, or events within contests, such as making a field goal or sinking a putt. But wagering on any Kentucky collegiate athletic teams would not be allowed. The Kentucky Horse Racing Commission would manage the new sports betting system.

“I’ve never had so much positive response… on any bill I’ve had in 13 years,” says Koenig. “On this issue, people know that [sports betting] happens, some of them do it themselves, and they want to do it legally.”

The legislation would also legalize and regulate online poker and fantasy sports, but those games would be managed by the Kentucky Lottery Corporation.

Venues that accept sports bets would pay an initial $500,000 licensing fee, and $50,000 annual renewal fees. That money would fund start-up and ongoing costs to operate the betting systems.

Revenues from the expanded gaming are estimated to range from $20 million to $48 million a year. The bulk of the proceeds will go to the state’s ailing pension systems, with 5 percent of revenues reserved to address gambling addiction.

The Social Costs of Gambling
But gambling isn’t the way the state should fund its obligations, according to the Family Foundation’s Kent Ostrander.

“Normally when government seeks to raise revenue, they’re very careful with their tax structure so that corporations, businesses, sales tax, property taxes, and what have you, it’s spread around,” says Ostrander. “But gambling only targets the family… We think that’s unfair and unhealthy.”

Ostrander estimates there may be 35,000 pathological gamblers in Kentucky already, which he says costs the state some $475 million in criminal justice, social services, and other expenses. He says it’s ironic that the state will sue pharmaceutical companies to recover the costs associated with opioid addiction, while it’s willing to work with the gaming industry despite the problems of gambling addiction.

Koenig says Ostrander’s numbers are inflated. He cites research that indicates that between 1 percent and 3 percent of gamblers has a problem. Even if sports betting becomes legal, Koenig says he doesn’t expect a spike in gambling addiction since the people who want to gamble are already doing it, legally at tracks and casinos, or illegally.

“Bookies don’t care if you have a problem,” says Koenig. “The off-shore bookmakers that you can get on your phone and in five minutes from now you can be placing illegal bets… they just care that you have money to put up.”

Koenig and Rep. Al Gentry argue that the state already pays the social costs associated with problem gambling. Gentry says most people who gamble do so responsibly and only for entertainment. But by legalizing sports betting, the Democrat says Kentucky will have revenues to help those with a gambling addiction.

“Our opponents want to portray gambling as this horrible, terrible thing that creates all these social problems,” says Gentry. “If this was such a destructive-type activity, it wouldn’t exist because they’d run out of people gambling, but that doesn’t happen.”

The societal impacts of gambling are very real for Rev. Hershael York. He says he’s had to help parishioners struggling with addiction, at least one of whom faced criminal charges for embezzlement. York contends that the prospect of funding public pensions and helping addicted gamblers isn’t enough to justify the state endorsing more gaming.

“If I can fund something good with the money out of your pocket, I can feel better about it,” says York. “That’s just not the way to love your neighbor, and it’s just not the business that government should be in.”

Gentry says people should be able to decide how they want to spend their money, even if that means they make poor decisions. He argues that a bigger issue is the money Kentucky looses to out-of-state casinos or off-shore bookies.

“They’ll make the claim that we’re not really creating new revenue, we’re taking revenue from other sources that might be used on food or whatever,” Gentry says. “But I say the only shift that’s going on is our money is going some other place.”

Is It Constitutional?
Critics of the measure also say sports gaming may not be constitutional even if the General Assembly approves HB 175.

Kentucky’s 1891 Constitution prohibits gambling and games of chance, which is why voters had to approve constitutional amendments to allow a lottery and charitable gaming. As for parimutuel wagering, the Kentucky Court of Appeals ruled in 1931 that it was legal because those betting on horse races play against other betters, not the “house.”

As someone who has long opposed expanded gaming, York says that’s a convenient line of thinking.

“There have been many legislators wanting a constitutional amendment, and when they couldn’t get it, now they say we don’t need it,” says the pastor. “It just seems to me not an honest appraisal of the constitution.”

York says he would prefer the sports betting proposal “go away,” but if it does proceed, he says it should be done as a constitutional amendment so that Kentucky voters could have a say in the matter.

Even if sports betting is legalized, whether by an amendment or through simple legislation, Koenig says he expects opponents to challenge it in court.

’The Gambling Branch’ of Government
Corruption is another concern among opponents. York notes that Kentucky already has a history of point shaving, referring to a 1951 scandal involving the University of Kentucky men’s basketball program and several other collegiate teams.

Koenig says that’s one reason why his bill forbids bets on state college and university programs, although he acknowledges that people can easily bet on those teams already.

“I don’t know, though, what changes the morality of it,” says York. “We call them corrupt for doing it, but if the state sanctions it, it’s no longer immoral.”

Opponents also fear that legalized sports betting will open the door for other forms of gambling. Ostrander cites language in HB 175 that he says could allow betting on non-sporting events. He sees that as another move by gambling interests to expand gaming in the commonwealth beyond what current laws allow.

For example, Ostrander and the Family Foundation contend historical racing machines now available at a number of horse tracks in the commonwealth are illegal. The Family Foundation is locked in a court battle with the Racing Commission over the slot-like machines that has players betting on the outcomes of previously run horse races.

“It’s almost as if we’re creating a fourth branch of government,” says Ostrander. “You have the executive branch, the judicial branch, you have the legislative branch, and you have the gambling branch, which is operating out of the Kentucky Horse Racing Commission.”

In an effort to exercise more uniform control over all gambling in the state, Koenig has proposed another measure to create a Kentucky Gaming Commission. House Bill 410 would also dissolve the Horse Racing Commission, which is under the Public Protection Cabinet, as well as the Lottery Corporation, which is an independent entity with its own board, and move their operations to the new gaming authority.

Koenig’s proposed commission would also take over charitable games, which is also under the Public Protection Cabinet. He says it simply makes more sense to have one authority to manage all forms of gaming in the state.

HB 410 is assigned to the House Licensing, Occupations and Administrative Regulations Committee. but it has not been heard yet. That panel has already approved Koenig’s sports betting measure. HB 175 now awaits a vote in the full House.

Related Stories:
The Prospect of Legal Sports Betting in Kentucky 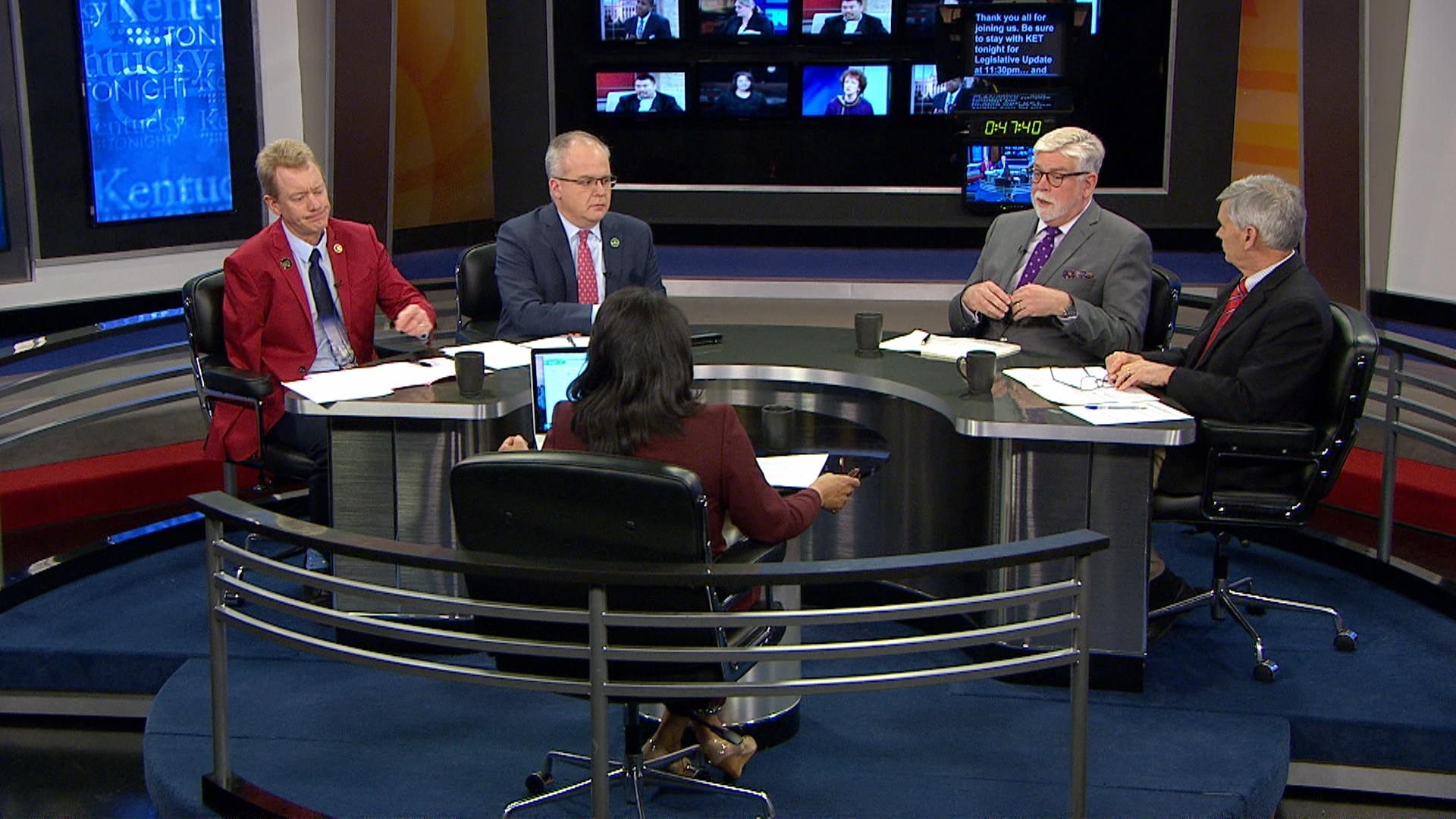