The task before state legislators to pass a massive overhaul of Kentucky’s eight different retirement systems for public employees was already tough enough.

It got even harder last week after allegations of sexual harassment rocked Frankfort and forced Rep. Jeff Hoover (R-Jamestown) to step down as Speaker of the House of Representatives. Three other Republican lawmakers were temporarily removed from chairing House committees pending an investigation of the allegations.

Those developments further dimmed the prospects of a special legislation session to consider pension reform legislation that some members of the House Republican majority already questioned.

“I’m not going to sit here and tell you that it has not been made more difficult,” says state Senate President Robert Stivers. “I’m a realist in this.”

Is There Time for a Special Session?
No date had been set yet for the special legislative session on pension reform, and now some lawmakers question whether there’s enough time to convene one before the start of the 2018 General Assembly on Jan. 2.

“I think it would be really difficult to get all the bugs worked out in these short, 60 or so days before we actually go into the regular session, says Rep. Wilson Stone.

He says the minority caucus has a range of concerns about the 505-page reform bill, especially provisions they fear might violate the inviolable contract and lead to lawsuits. Stone says he’s also disappointed that Democratic lawmakers as well as pensioners didn’t have a greater voice in crafting the legislation.

Some House Republicans also have concerns about the bill. Rep. Jerry Miller says he’s optimistic those issues can be resolved within his caucus soon so that Republicans can get to the 51 votes needed to pass a bill through the chamber. Miller also says completing pension reform in a special session will facilitate budget negotiations coming in 2018.

“We’ve got to know what the financial impact is on the next biennium’s budget,” says Miller. “The earlier we get that set, I think the better budget can be put together.”

On the Senate side, President Robert Stivers says he thinks there is enough time to convene a special session before the end of the year, but he says its up to the members of both chambers to determine whether a “cohesive session” is possible at this point. Sen. Ray Jones says legislators should wait and tackle pension reform in the 2018 regular session. He says that saves the state an estimated $400,000 to convene the special session and it would give lawmakers time to resolve problems with the proposed legislation.

“Let’s just be blunt,” says Jones. “There’s not enough votes in the House of Representatives for this plan or we would’ve already had a special session called.”

The Switch to Defined-Contribution Plans
The bill puts most public employees and teachers hired after July 1, 2018, into a new 401(a) defined-compensation plan rather than the traditional defined-benefit pension plan. (The 401(a) plans are designed for government employees and are similar to 401(k) plans in the private sector.) Most current workers who opt to stay on the job past the date that they are eligible for full retirement benefits will be moved into a 401(a) plan instead of continuing to pay into their pensions.

Pension advocates say the 401(a) plans will not provide as secure a retirement for public workers. They say that could make it harder to attract and retain qualified employees to government jobs that traditionally pay less than similar positions in the private sector.

The defined-contribution plan raises additional concerns for educators. While other public sector workers receive Social Security, Kentucky teachers do not. Stone and Jones say that makes their retirements even more vulnerable should another economic collapse wipe out their 401(a) savings. That will make recruiting qualified teachers to Kentucky classrooms even harder, they say.

”We have made huge strides [in state education] because we’ve been able to get good teachers, teachers who care,” says Jones. “This bill will undermine all the progress that we’ve made.”

Stivers says a teacher with an average life expectancy and average career pay will have more money when they retire with the 401(a) plan than they would with a traditional pension plan. The Senate President also says the educator groups he heard from did not want their teachers to be enrolled in Social Security.

The 401(a)s will offer other benefits as well, according to Stivers. He says the plans are more portable should the employee want to change jobs, and they enable the employee to manage their own money by selecting from 12 to 15 different investment options. Stivers says the current pension plans only offer six such options.

Critics of the proposed legislation note that it eliminates transparency provisions that regulate how retirement funds are managed. Stivers and Miller say that’s because the employees will be in charge of their own savings.

“The 401(a) plans are not going to offer hedge funds and alternative investments, and that specifically is the reason [for] the exemption of the 401(a) plan from part of the transparency,” says Miller. “Parts of that transparency bill really don’t apply because individuals are controlling their own investments.”

Retiree Health Care, Sick Leave, and Other Provisions
The Republican plan also mandates that all public employees contribute 3 percent of their pay to the pool of money that funds retiree health benefits. Critics contend that amounts to a pay cut for workers, many of whom haven’t had a raise in years. Stone also argues that the move is unnecessary. Although the health care pools do have their own modest unfunded liabilities, Stone says those pools are now on a positive trajectory towards stable funding.

While the Bevin administration said the 3 percent contribution would help shore up those health care pools, it now appears that the additional money from teachers and government workers would be a wash.

“With teachers [and other public employees] contributing to guarantee them a health care benefit at retirement, that frees up money to put into the actual indemnity side so it stabilizes the cash side, the payment side,” says Stivers.

In other words, having workers pay an extra 3 percent frees up other state money that can be applied to the much larger unfunded liabilities in the various retirement systems.

The language of the draft bill also changes sick leave policies. Jones says the proposal eliminates a mandate for a minimum of 10 paid sick days for teachers and school employees. Stivers responds that sick leave policies are set by statute at the local district level, so nothing is changing.

Stone says it’s a critical issue that must be resolved.

“It’s just really important that the teachers know when they sign their contract that they have those sick-leave days,” says Stone. “For them not to know from year to year that they’ll have them, that they’ll be able to accumulate them is a real strike at their contract.”

Another sticking point involves language that would suspend pension benefit payments for retirees who go back to work. However, the legislation exempts elected officials and gubernatorial appointees from that provision.

Jones says that is a “blatant violation of constitutional rights” of retirees who are guaranteed equal protection. Stivers disputes that interpretation. He contends the idea was to incentivize workers to stay on the job longer so they wouldn’t be drawing down pension benefits. But he adds that the provision can be “easily remedied” by removing it.

Although lawmakers are still awaiting the fiscal review of the proposed reforms, Miller says he thinks the current legislation would save the state about $500 million. He says the plan to pay down the estimated $35 to $60 billion in unfunded liabilities by making fixed annual payments over the next 30 years is crucial.

“We’re going to catch that up by converting to the level-dollar [funding] and getting out of the kick-the-can-down-the-road mentality that has existed for many, many decades here,” says Miller.

What’s Next?
Frustrated that their voices weren’t heard in the pension discussions, a coalition of active and retired educators and school administrators released their own reform proposal on Monday. Their “Shared Responsibility Plan” covers those in the teacher and county employee retirement systems. That proposal maintains the defined-benefit pension plan, but new hires would have to work longer and would not be able to use accrued sick days to enhance their pension benefits.

Stivers says lawmakers are open to suggestions, but he says this is the first time he’s seen a proposal from educators despite having had numerous meetings in previous weeks with a range of groups representing their interests. Jones praises the groups for offering “reasonable concessions” on benefits. He says he is willing to sponsor a bill that encompasses the “Shared Responsibility Plan” so that lawmakers can debate its merits.

Jones also renewed the call among Democrats that lawmakers address tax and pension reform simultaneously. He says pension funding will be a perpetual crisis until legislators fix the state’s broken tax system.

“We need to be looking at all these incentive programs to see what’s working and what’s not, and where we can capture revenues that we can use to address this,” says Jones.

But the sooner lawmakers address the pension crisis, the sooner the state will be able to free up money to apply to other government services, says Stivers. He agrees that tax incentives should be reviewed, but he cautions against a wholesale elimination of corporate exemptions.

“Probably the most significant economic impact that we’ve had in this state in years was due to corporate incentives by [former Gov.] Martha Layne Collins, bringing Toyota to Georgetown,” Stivers says.

However the next few weeks unfold, Stone encourages Kentuckians to be patient. He says whatever legislation emerges will not have an emergency clause that puts the changes into effect immediately, so current employees will have plenty of time to assess the reforms and decide how to best plan for their futures. He also wants people to know that all 138 legislators value and appreciate the state’s public sector workforce.

“These discussions about numbers are really about getting it right,” says Stone. “We want it to be right, sustainable, fair, and be in a way that people will be proud to be an employee of the state of Kentucky or of our local school districts.” 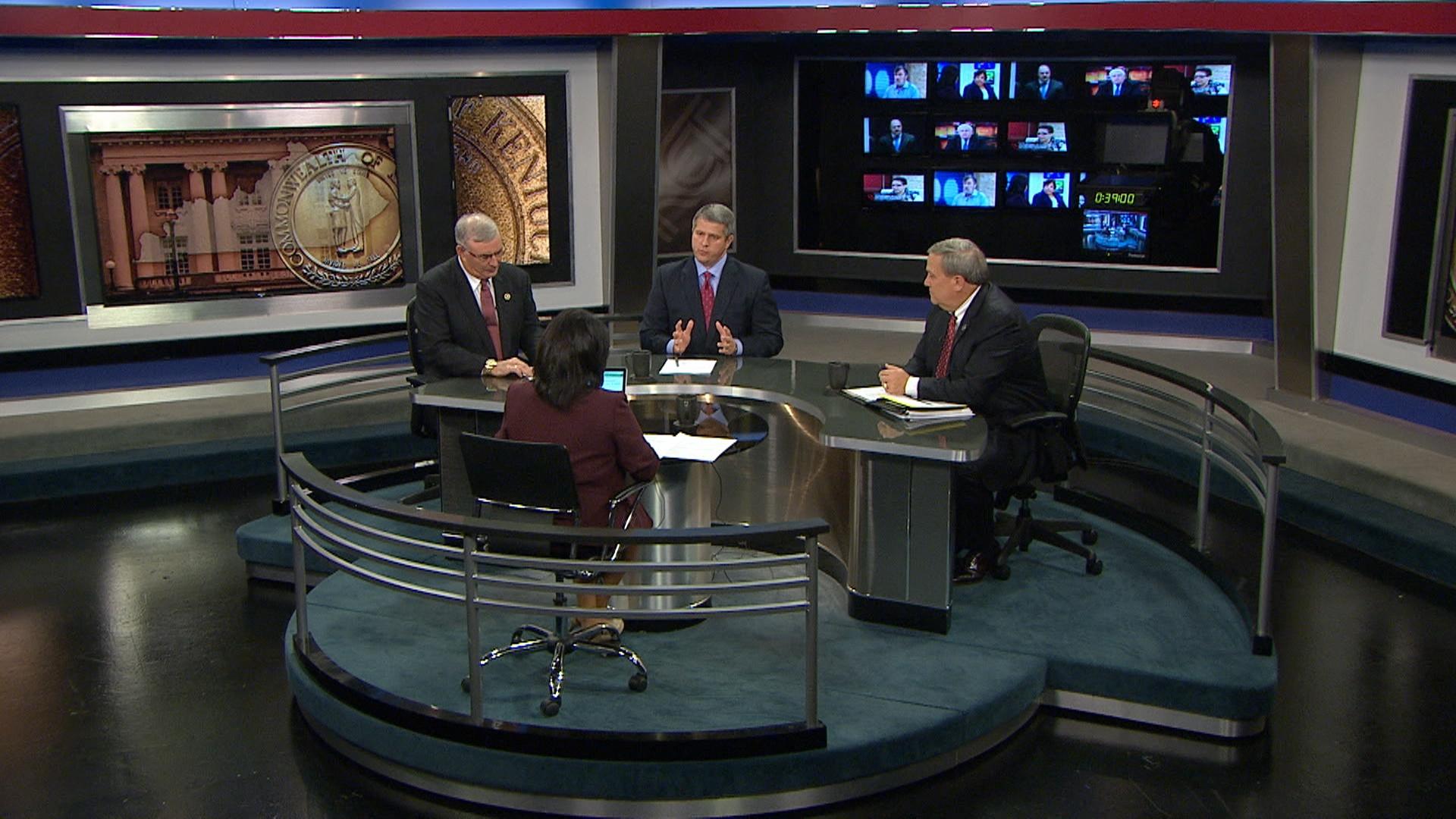