Bill and his guests discuss political trends on the eve of the 2016 election.Guests: Jonathan Miller, former state treasurer and former chair of the Kentucky Democratic Party; Steve Robertson, former chair of the Republican Party of Kentucky; Colmon Elridge, former executive vice president of the Young Democrats of America; and K.C. Crosbie, committeewoman for the Republican Party of Kentucky.
Season 24 Episode 1 Length 56:33 Premiere: 11/07/16

Political Trends in the 2016 Election: 5 Takeaways

An ugly moment for the country.

A weird energy among Republicans.

Four veteran political operatives pulled no punches in describing the 2016 election cycle on Monday’s edition of Kentucky Tonight on KET. The guests were Jonathan Miller, former state treasurer and former chair of the Kentucky Democratic Party; Steve Robertson, former chair of the Republican Party of Kentucky; Colmon Elridge, former executive vice president of the Young Democrats of America; and K.C. Crosbie, national committeewoman for the Republican Party of Kentucky.

Even as they looked forward to the conclusion of the long and unusual campaign, they offered their views on races to watch in the battle to control the state House of Representatives, and they predicted the outcomes of the U.S. Senate race and the 6th Congressional district contest. Here are five takeaways from their conversation.

1. House Control Matters
As you would expect, the Democrats believe they will maintain their majority in the state House while the Republicans argue this is the year they finally flip the chamber. Democrats currently hold a 53-47 edge in the House, but Robertson argues that the trends favor the GOP this cycle. He cites last year’s victories by Republicans in the races for governor and three additional statewide offices. Plus he says GOP voter registrations have outpaced Democratic registrations 10 to 1 since Barack Obama became president.

“Kentucky is trending Republican,” Robertson says. “The question is, are we there? I submit we are.”

Robertson says the only way Gov. Matt Bevin can address the pension crisis and other issues plaguing the commonwealth is if he has Republican majorities in both the Senate and the House.

But Democrats remain optimistic about their prospects. Miller points to recent election cycles where Republicans were expected to gain the House majority but still came up short. Even in a series of special elections earlier this year to fill four open House seats, Democrats won three of the contests.

If the GOP does flip the House, Miller says it would be a seismic political shift that could last for generations. He says progressive legislators will no longer be able to prevent Republican moves to enact right to work legislation, abortion restrictions, tort reform, and other measures Democrats have long opposed. They’ll also lose the chance to counteract the actions of Gov. Bevin.

“People like the notion of checks and balances,” Miller says, “and to have a bipartisan, purple Frankfort – to have Democrats who are able to stand up to Republicans and not [give] a blank check to the governor.”

Robertson says this is one down-ballot race where Republican presidential nominee Donald Trump could be a liability. The southwestern Jefferson County district is heavily Democratic and voted for Barack Obama for president in 2008 and 2012. Butler himself was a Democrat before switching parties late last year. Kentuckians for Strong Leadership, a pro-Republican Super PAC, has invested heavily in the race on behalf of Butler.

Democrat Cantrell is an attorney who has strong support from union groups. Elridge says Cantrell has spent her career fighting for children and families, and she knows how to improve the lives of those in the district and across the commonwealth. Miller adds that the closely contested race could easily signal which party will be in control of the House come this January.

The 62nd House district features a rematch between incumbent Democrat Chuck Tackett and Republican Phillip Pratt. They faced off in a special election in March to fill the seat vacated by Ryan Quarles, who became Kentucky’s Commissioner of Agriculture. The district includes Owen County and parts of Fayette and Scott Counties.

Crosbie says Tackett won that race because of low voter turnout and because a pro-Democrat Super PAC, Kentucky Family Values, spent more than $100,000 on the contest. She contends in this regular election with much higher voter participation that Pratt will be victorious.

Republicans have tried to nationalize the race by tying Tackett to the unpopular policies of fellow Democrats Obama and Hillary Clinton. Elridge says that strategy won’t work in a district where Tackett is well known and has a long history of public service.

Stumbo recently told the Associated Press that his opponent can’t beat him, but Donald Trump could. The Republican has pledged to lift all Obama Administration regulations on coal mining and revitalize the industry, while Democratic presidential nominee Clinton famously said that her energy policies would put coal miners and companies out of business. Stumbo contributed to Clinton’s campaign and endorsed his fellow Democrat earlier in the race. He has since rescinded that endorsement.

“You can say, ‘I’m not going to vote for her, I’m not going to support her,’” Crosbie says. “But when you take the initiative to write a check to a candidate who wants to completely shut down the one industry in your area that creates jobs… it’s not a popular thing to do.”

Outside groups on both sides have spent thousands of dollars on the race. Miller says he’s mystified that Republicans would spend so much money trying to unseat the popular Democrat. Miller contends that Stumbo’s constituents are familiar with his accomplishments and know that the Speaker has been pro-coal for decades. For Republicans to try to depict Stumbo as being against mining is ridiculous, according to Miller. He says the GOP is targeting Stumbo for defeat because he is a skillful legislator who has frequently outmaneuvered Republicans in Frankfort.

Over in the 14th district, which comprises Ohio County and another part of Daviess County, Republican entrepreneur Matt Castlen hopes to unseat incumbent Rep. Tommy Thompson. Robertson says Castlen, who owns a steel fabricating business, is running on a positive message and strong vision for the commonwealth. Miller says Thompson, who has been in the House since 2003, is a homebuilder and conservative Democrat.

In House district 8, which includes portions of Christian and Trigg counties, Democrat Rep. Jeff Taylor faces a rematch with Republican Walker Thomas. Taylor defeated Thomas in another special election contest earlier this year. Crosbie attributes Taylor’s victory to the low-turnout special vote. She says Republicans could pick up this seat because independent polling has Thomas ahead of Taylor.

Elridge counters that the 8th district has a significant African American population that is angry at how President Obama has been treated over the years. He says they will again turn out for Taylor, who is also black, and help the Democrat to victory.

“There aren’t very many areas and times where the African American community can rebut in a deep red state,” Elridge says. “This is going to be one of them and Jeff Taylor is going to be just fine tomorrow night.”

5. Kentucky’s Federal Delegation
The panel again breaks down along party lines to predict the winners of the U.S. Senate contest and the 6th Congressional district race. Robertson says Kentuckians appreciate how Republican incumbent Rand Paul is forcing the Senate to have big conversations about important issues like balancing the federal budget. Robertson says Paul will easily win a second term to the Senate.

Miller acknowledges that Lexington Mayor Jim Gray is a long shot to defeat Paul, but he says the Democrat has done the work needed to put himself in a position to win the race.

Robertson and Crosbie also expect an easy victory for Rep. Andy Barr, who is seeking a third term in Congress. Pastor and long-time Kentucky Council of Churches Executive Director Nancy Jo Kemper is the Democratic challenger in that contest. Elridge says Kemper has spent her life trying to unite people and can help repair the dysfunction in Washington.

That race might be closer than some poll watchers think, according to Miller. He says the only reason why Barr would be running so many negative ads against Kemper is if he is afraid of losing. Miller credits the Democrat with running a great campaign despite having limited financial resources. 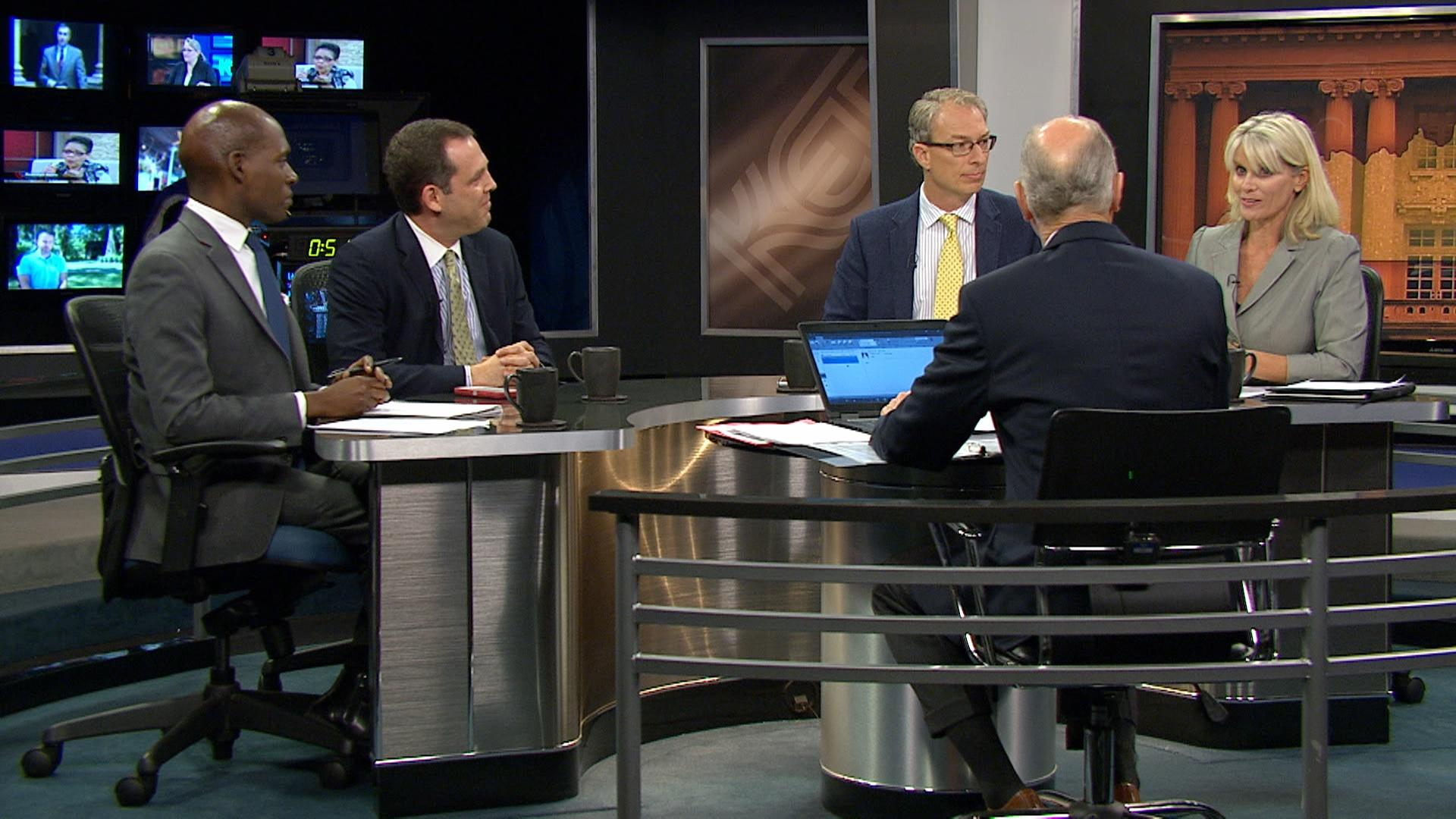