Debating Policy Proposals From a New Administration with a Tenuous Majority

A typical presidential term lasts 1,461 days, so any 100-day period represents a fraction of a chief executive’s time in office.

But since the first Franklin D. Roosevelt administration, presidents have been evaluated on the successes and failures of their first 100 days in the White House. While it may be more fodder for pundits than a serious milestone, the benchmark has become a fact of political life for a president’s first term.

“By that point, the honeymoon’s over and the pomp and circumstance has faded,” says Louisville-based Democratic consultant Matt Erwin. “You’re finding out the pace and tempo of a presidency.”

“This is about a president and a Congress led by Democrats that is meeting the gravity of this moment with solutions,” says Elridge. “For this moment, government needs to be a leader in getting this country back on track.”

Republicans say that Biden has failed on one key promise: To bring bipartisan unity back to Washington. The American Rescue Plan passed in early March with no Republican votes.

“What we’re seeing is their idea of unity is you come to our side and capitulate to what we want,” says Republican strategist Tres Watson of Capitol Reins PR.

While Democrats control the executive and legislative branches, their grasp on Capitol Hill is tenuous. Democrats currently have a six-seat majority in the House; The Senate is split 50-50 with Vice President Kamala Harris providing the deciding vote in the Democrats’ favor in case of a tie. Watson says those narrow margins could stall Biden’s agenda.

“It’s going to be hard to get some of these bills through the House much less the Senate, where you have to worry about somebody like [West Virginia Democratic Sen.] Joe Manchin blowing it up,” says Watson.

Under former President Donald Trump, Congress passed a $2.2 trillion economic stimulus bill and a $900 billion COVID relief package with bipartisan support. But Republicans are now balking at the price tags for Biden’s measures, including his $2 trillion infrastructure proposal and his $1.8 trillion American Families Plan to invest in education, child care, and paid family leave.

“This administration, it seems to want to keep America dependent on the government,” says Allison Moore, a Corbin City Commissioner and former campaign spokesperson for U.S. Senator Mitch McConnell. “It seems like what they are doing right now is limiting the upward success paths for the middle and lower classes who took a really hard hit during the pandemic.”

But given the debt accumulated during the Trump Administration, Elridge says it’s ironic that Republicans are suddenly worried about federal spending.

“They say on the other side of the aisle this is way too much to pay for,” says Elridge, “yet [they] were silent – you could hear a mouse tap dance – when Donald Trump’s own policies were exploding the country’s debt.”

The Battle over Infrastructure

“This is infrastructure,” says Elridge. “This is how people not only go to work, care for families, but how they can participate in the American dream, how they can climb that ladder of success.”

Republicans have criticized the price tag, the fact that it includes items not deemed traditional infrastructure, and Biden’s plan to pay for the package by increasing the corporate tax rate.

“There’s 1.4 million small businesses and the U.S. Chamber says this tax increase would halt the recovery of businesses that have already struggled during the pandemic,” says Moore.

Watson also opposes Biden’s proposed tax increase. He contends the government may already have access to sufficient funds if it collected everything it was owed.

“I don’t think anybody likes tax cheats,” says Watson. “I’d love to see us go ahead and collect the taxes that people are supposed to be paying right now and see if we have enough money to operate.”

Republicans have proposed their own infrastructure plan that focuses on traditional transportation needs plus broadband and drinking water projects totaling about $568 billion. Erwin contends the country needs to spend far more now to compensate for failing to invest in infrastructure improvements over the past 40 years.

“The reason that they are big and expensive and people are moaning about the price of things is because the can has been kicked down the road for generation after generation,” Erwin says.

Although Biden’s plan would benefit the commonwealth, even potentially providing money to replace the aging Brent Spence Bridge between northern Kentucky and Cincinnati, U.S. Senate Minority Leader Mitch McConnell has signaled his opposition to it. Watson and Moore say a new bridge would cost between $3 and $4 billion, and would likely be the responsibility of Kentucky and Ohio rather than the federal government.

“If it’s state jurisdiction, then the U.S. Senators from Kentucky really don’t have all that much control,” says Moore.

“It’s also policy versus politics,” says Erwin. “He ain’t going to vote for it because he doesn’t want to give Biden a win.”

Like previous administrations, the Biden White House is struggling to handle the influx of immigrants coming across the southern border. Elridge and Erwin say the Democrat must take a very different path on immigration than his Republican predecessor.

“What you can’t do is turn immigration into this punitive, race-driven, angry, divisive thing,” Erwin says.

“[Biden] is focused on how to control things at the border while also promoting a path to citizenship for millions of people who go to work everyday to build this country and deserve to have a place out of the shadows,” says Elridge.

But Republicans have criticized Biden for what they say is an inadequate border response.

“Call it what it is, a crisis, and go down there,” says Moore. “This is the perfect opportunity for him to take a big issue head on.”

Watson sees immigration as a two-part problem: how to control the border, and what to do with immigrants who are already here. He argues that people who risk their lives to come here illegally, or wait years to enter legally likely don’t want to freeload but want to work hard to better their lives. He says both parties have failed to reform immigration, but contends the GOP has made a “tremendous miscalculation” on the issue.

“Republicans are missing a chance to cultivate a huge base of voters who, I believe, would tend to support Republican policies if we help them get in, help them become citizens,” says Watson. “They’re going to make our country better and they’ll make our party better.”

Another priority for Democrats is police reform. In his address to Congress last month, Biden called on lawmakers to pass a policing measure by the end of May, which would be the first anniversary of the death of George Floyd at the hands of Minneapolis police officers.

Elridge says reforms are needed to correct what he calls a biased and racist criminal justice system. Watson says there is wide bipartisan consensus to pass some reforms that could result in lasting change, but he warns it won’t be a quick fix.

Whether immigration, infrastructure, criminal justice reform or other issues, Watson says he wishes Democrats would propose smaller bills that focus on points of agreement between the two parties. That way, he says, lawmakers can pass beneficial legislation while leaving the thornier issues to debate later.

“I don’t know that we can do these massive, big projects and bills anymore,” says Watson.
“They’re jamming everything into these giant, omnibus bills when they could get agreement on a whole bunch of this stuff if they were done individually.”

Erwin contends Congress can’t afford to be “dithering around” when the country is “falling apart.” He says the problems that need to be solved are too big to be handled in piecemeal fashion.

“Let’s bust up this legislation to make a bunch of Republicans feel good ain’t the way we’re going to solve those problems,” says Erwin. 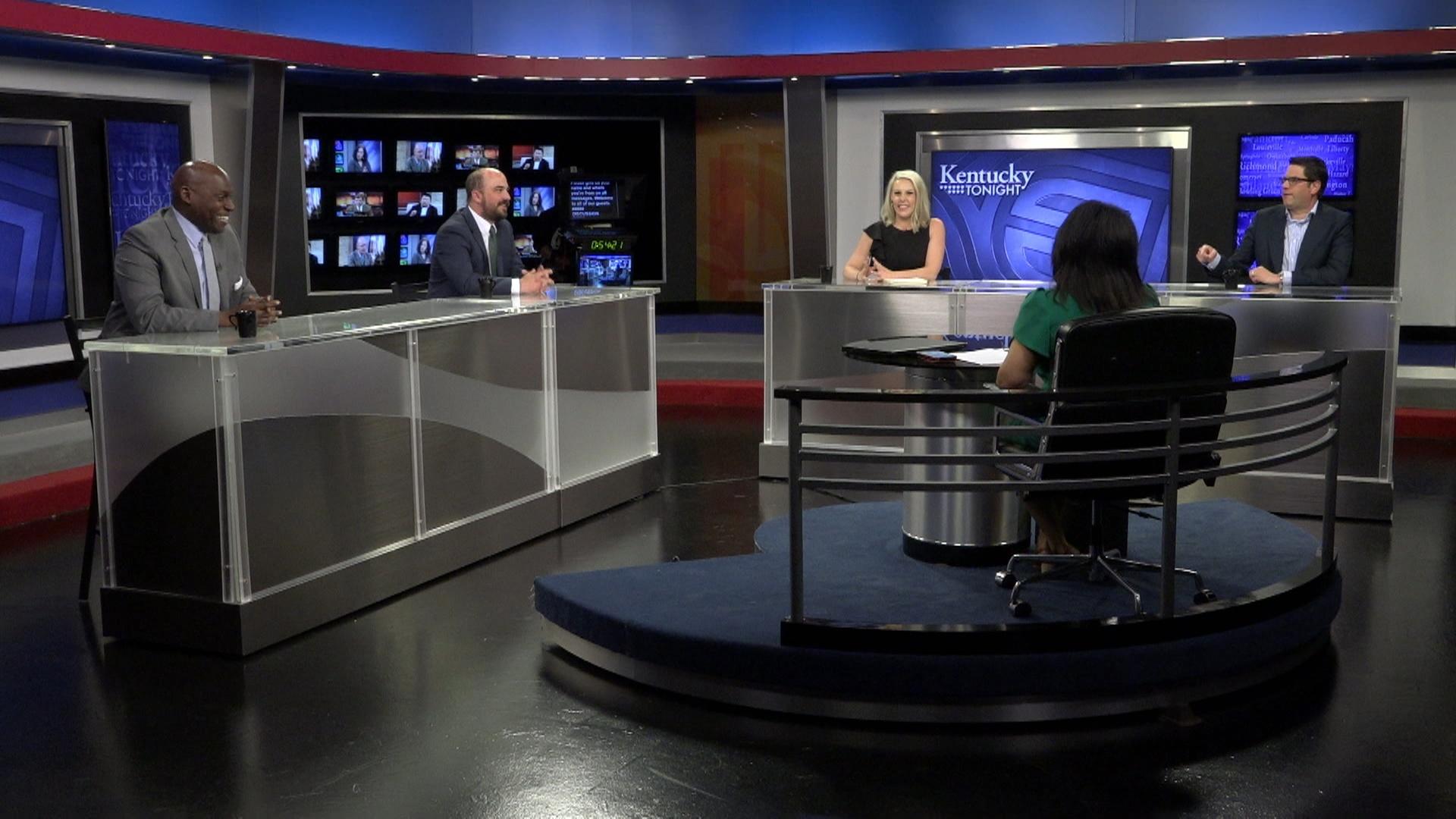