The Mood of the Nation, Veepstakes, and More

The major television networks have had a hard time attracting audiences to their coverage of the Democratic and Republican national conventions in recent years. The events have become so managed and predictable as to generate little interest among Americans.

Next week’s Republican gathering in Cleveland and the Democrats’ meeting in Philadelphia the week after could be overshadowed by voters who are deeply dissatisfied with their party’s presumptive presidential nominees, and a national mood that’s been shaken by the slow economic recovery and recent violent events.

So what can we expect of the 2016 elections?

A panel of political insiders appeared on KET’s Kentucky Tonight to discuss the presidential contest and other races on the ballot this year. The guests were Matt Erwin, a consultant and a former spokesman for the Kentucky Democratic Party; former state Rep. Bob Heleringer, a Republican from Louisville; former state and U.S. Rep. Mike Ward, a Louisville Democrat; and Republican operative Iris Wilbur, who served as political director for Sen. Mitch McConnell’s 2014 re-election campaign.

The Mood of the Nation After Dallas
What is the role of political leaders during a time of tragedy and turmoil? Should a president be a comforter-in-chief?

Those questions have surfaced again as the country grapples to make sense of last week’s high-profile police shootings of black men in Baton Rouge, La., and St. Paul, Minn., and the sniper attack that killed five, white law enforcement officers in Dallas. Bob Heleringer argues the current racial tensions can’t all be blamed on Republican presidential candidate Donald Trump because he says race has been an issue in American politics since before the Civil War. Despite significant social and legal advances on matters of race, Heleringer says a climate of fear and distrust still pervades many communities across the country.

“It’s up to political leaders … to do what they can whenever they run for office, whenever they hold office, to be the calming influence and to try to show everybody a better way,” says Heleringer.

Mike Ward says he believes race relations have improved but says there’s still a long way to go. He says many people had hoped, perhaps naively, that the election of America’s first black president would help end racism in the country, yet that didn’t happen. Ward contends that Trump has exacerbated racial tensions with his frequent comments about Mexicans and Muslims.

“He has gotten the Republican nomination, I think, largely by pitting white Americans against the other Americans,” Ward says. “This does not do our democracy any good and any self-respecting Republican, candidate or citizen, needs to tell Donald Trump that.”

Political rhetoric has grown sharper in recent election cycles, according to Iris Wilbur. She says people are still hurting from the recession, and that’s fueling anger and fear among some voters. Wilbur acknowledges that political consultants like to fan the flames of discord, and she says it’s up to voters to reject those tactics in favor of respectful and productive policy conversations. Wilbur hopes her party’s presumptive presidential nominee will do the same.

“Mr. Trump was not my first, second, or third choice but … he has won the process fair and square,” Wilbur says. “I’m not going to sit here and defend every statement he’s made because I personally believe that a lot of the statements that he’s made are inappropriate … [but] he does tap into an energy, a real concern among mainstream voters and that’s something we shouldn’t discount.”

Matt Erwin says the events of the past week are heartbreaking and horrific. He says he understands the desire among African Americans and others to mobilize against what they see as institutional injustice. While he deplores the shootings of the Dallas officers, Erwin also doesn’t want the actions of “a deranged person with a sick agenda” to derail the Black Lives Matter movement.

“Anybody with a half a brain and a fourth grade reading level knows that these folks have a point,” Erwin says.

The Veepstakes
Wilbur and Heleringer see Trump selecting his running mate from among establishment politicians like New Jersey Gov. Chris Christie, former Congressman Newt Gingrich, or Indiana Gov. Mike Pence. Wilbur says Trump should announce his pick soon so he can get a good press bounce going into the Republican National Convention next week.

Erwin and Ward project Clinton will select either Sen. Tim Kaine of Virginia or U.S. Secretary of Housing and Urban Development Julián Castro. While Massachusetts Sen. Elizabeth Warren had been seen as a popular option for vice president, Ward says he doesn’t believe Clinton will pick her.

Whoever Clinton and Trump select, Heleringer says the vice presidential hopefuls could wind up being more popular than their running mates.

“It won’t be 10 minutes after the vice presidential nominees are named that the public will say, ‘Gee, why can’t we reverse both of these tickets,’” Heleringer says.

The Republican adds that he thinks delegates will try to challenge Trump’s nomination at the GOP convention, and he says he hopes they are successful.

So Who Wins Kentucky
A Cofounder Pulse Poll released Monday by lobbyist and former Kentucky Auditor Bob Babbage shows Trump with a 5-point lead over Clinton in the commonwealth.The poll uses Google Consumer Surveys to sample opinions of internet users in the state.

Ward says that slim lead for Trump illustrates the tough task ahead for the GOP. He contends voters are just beginning to learn about the Republican and how bad he’ll be for small businesses.

Erwin also points to Clinton’s commanding lead among female and Hispanic voters, which he says will be nearly impossible for Trump to overcome. He adds that Trump’s values simply don’t match up with the values of conservative Kentucky voters.

But Wilbur contends those conservatives definitely won’t vote for Clinton, especially as Vermont Sen. Bernie Sanders has pulled the Democratic platform farther to the left. Plus Wilbur says Clinton has a significant credibility issue arising from her use of a private e-mail server while she was U.S. secretary of state.

Clinton also did herself no favors among some Kentuckians when she said her environmental policies would put coal companies and miners out of business. As a result Clinton lost most of the state’s coal-producing counties to Sanders in the May primary.

Bob Heleringer says Clinton doesn’t have “a ghost of a chance” of winning Kentucky in November given her statement and Trump’s pledge to revitalize the coal industry. But Ward argues Clinton and other Democratic candidates are the only ones offering a serious plan to help struggling coal communities by supporting education.

What About a Third Party Option?
With both Trump and Democratic candidate Hillary Clinton setting records for high disapproval ratings, maybe it’s time to consider a third-party candidate. For example could Libertarian candidate Gary Johnson, the former governor of New Mexico, make a significant play for president?

“Libertarianism is a neat idea,” says Erwin. “It’s, in my mind, sort of a political science fiction, it’s never really been tried.”

Former state legislator Bob Heleringer says voters always flirt with third party candidates, but those challengers rarely make a dent in the final outcomes. Even with the high negatives for Clinton and Trump, Heleringer says a third party candidate like Johnson will still pull only 3 or 4 percent of the vote in November. Republican operative Iris Wilbur says she thinks Johnson should get a chance to debate the major party nominees. But in the end, she says it will be more important to look at the numbers of people who simply don’t vote for president in November rather than worry about who voted for Johnson.

Other Races on the November Ballot
In the U.S. Senate race, Democrat and Lexington Mayor Jim Gray is challenging Republican incumbent Rand Paul, who is seeking his second term in Washington. Democratic consultant Matt Erwin says Paul’s tenure so far has been lackluster, plus he thinks voters are displeased that the Republican spent more time focused on his failed presidential bid than serving his constituents. Heleringer says Gray would need to flip upwards of 40 counties that Paul won in 2010 to be able to unseat the incumbent this year. He says it’s highly unlikely the Democrat can accomplish that.

Then there’s the local legislative races that will determine control of the state House of Representatives. Democrats have a 53 to 47 advantage in the House and they have controlled the chamber since the 1920s. It’s the last legislative body in the South with a Democratic majority.

Wilbur says state GOP party leaders as well as U.S. Sen. Mitch McConnell have worked hard to select credible Republicans to oppose many House Democratic incumbents. Heleringer adds that those Democrats face an additional challenge because he says Hillary Clinton is so “toxic” among Kentucky voters. He says her unpopularity will hurt Democrats seeking election or re-election to the House, especially in the state’s eastern and western districts.

Ward points to the success Democrats had in the special elections to fill four vacant House seats earlier this year. Democratic candidates won three of those contests, and Ward says the party will expand on those victories this fall. He says from the top to the bottom of the ticket Democrats are running on health care and education. He argues that Kentuckians will reject Republican plans to cut access to health care and further reduce funding for public education. 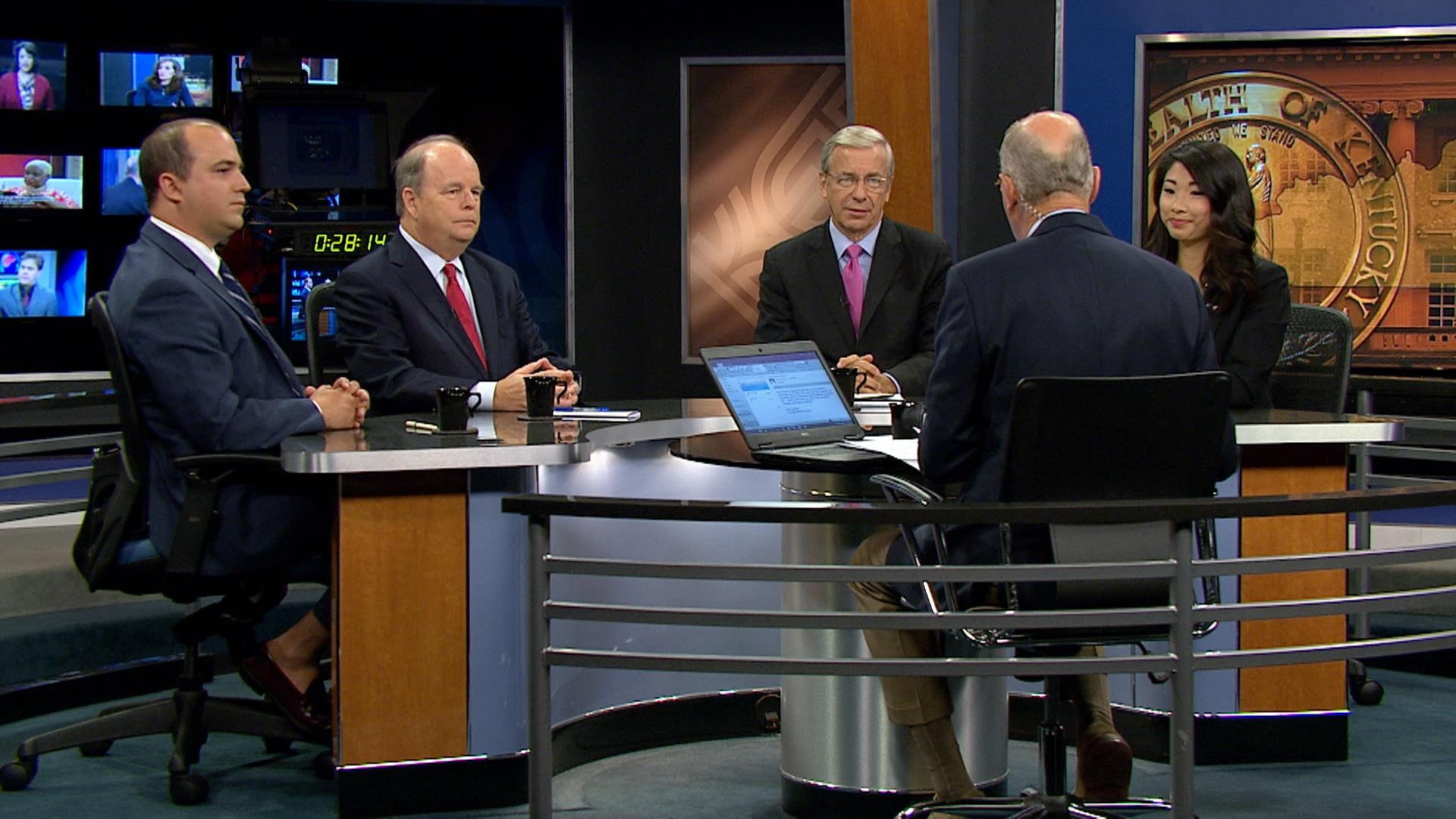