It’s primary election day in the commonwealth as Kentuckians head to the polls vote for their party’s picks for statewide constitutional offices.

KET’s Kentucky Tonight convened a panel of pundits to review the races and the candidates. The guests were Julia Crigler, Republican political consultant and founder of Bright Strategies; Sadiqa Reynolds, president and CEO of the Louisville Urban League; Ben Self, chair of the Kentucky Democratic Party; and Tres Watson, former Republican Party of Kentucky spokesman and founder of Capitol Reins PR.

Self says any of the three main contenders could provide a tough challenge to incumbent Republican Matt Bevin in the fall. He says Beshear, Edelen, and Adkins have strong platforms and have proven they can raise money and organize effective field campaigns. Even though Beshear and Edelen have aired negative advertisements against each other, Self says that simply prepares them for what will come in the general election campaign.

“We know that Bevin’s going to go negative… We know that Donald Trump’s going to weigh in to this election and try to smear the Democrat that comes of out of the primary,” says Self. “We’re going to see plenty of negativity in this race between now and the fall, really no matter what.”

“I think all three candidates also have very serious flaw that are going to lead to a Republican victory in the fall,” says Watson.

He points to “questionable work” that Beshear did while in private law practice in Louisville as well as the scandal surrounding Tim Longmeyer, the Democratic operative and former deputy attorney general who was convicted of bribery charges. Watson says people question Edelen’s true political leanings because he says Edelen has gone from being a moderate populist to a far-left progressive. As for Adkins, Watson says everything that’s gone wrong in Frankfort happened while the lawmaker served as House Majority Floor Leader.

Voter turnout on Tuesday is expected to be about 12.5 percent, but Crigler says it may actually go a little higher on the Democratic side, given the hotly contested gubernatorial primary. She says the race started to tighten once a political action committee that supports Edelen started to run negative ads against Beshear.

“If I’m Adam Edelen, I wish I had one more week [to run ads against Beshear],” says Crigler. If I’m Andy Beshear, I want to run the clock down, and if I’m Rocky, I’m trying to run right up the middle.”

Reynolds credits the Democratic candidates for campaigning in Louisville’s African American community, and she calls out the GOP candidates for not following suit. But she also cautions Democrats to do more than simply oppose Bevin.

“To the extent that any Democrat is running and saying this is just about beating the governor, it’s not good enough,” says Reynolds. “What we need to really be talking about is jobs, justice, education, health, and housing.”

The Republican Gubernatorial Primary
Gov. Bevin’s first term in office has been marked by economic growth as well as sometimes stormy relations with constituents and lawmakers, even those of his own party. As a result, Bevin faces three primary challengers: pharmacist and state Rep. Robert Goforth of Laurel County, Lexington entrepreneur Ike Lawrence, and northern Kentucky businessman William E. Woods.

Watson describes the primary as a “family squabble” and says that Republicans will unite behind the governor in the general election. He says if Bevin only got about 55 percent of the GOP primary vote, then he might be concerned about the incumbent’s chances in the fall election. But Watson doesn’t expect that to happen.

Despite a pugnacious approach to governing and lingering battles over the pension crisis, Watson says Bevin has a strong track record on which to run.

But Self argues that the division between Bevin and Republican lawmakers makes the governor vulnerable. He contends the Bevin campaign would not have spent $700,000 on his primary unless they were worried about the possible results.

“I think that calling it a family squabble is perhaps minimizing the amount of division that’s happening in the Republican Party right now,” says Self. “You’re seeing this with the governor being unable to negotiate with the state legislature about a special session.”

As for Bevin spending so much on his primary race, Crigler says that’s just good strategy.

“I think he’s starting to plant the seeds now for the general [election] and look forward and really draw out his narrative going into November,” says Crigler.

Bevin’s ads tout his working relationship with President Donald Trump, but Reynolds says she’s uncomfortable with that connection. She contends Trump has fostered division in the nation and promotes policies that hurt poor and minority individuals. So she sees the Trump-Bevin relationship as an important issue for voters to consider.

She’s also concerned that the Republican candidates have not reached out to minority constituents to seek their input on important issues.

“If there’s anybody who is running that thinks they can take our community for granted, then that is a problem for the entire commonwealth,” says Reynolds. “The issues that African American communities are challenged by… are really those that impact poor people [and] people who are undeserved in all parts of Kentucky.”

Crigler calls the two candidates up-and-coming stars of the Republican Party and says that they are vying to prove who can be the truer conservative.

“Regardless of the outcome, they both have very long political futures ahead of them,” Crigler says, “so it’s more of a race to get out of the gate statewide, and Kentucky would be greatly served by either one of these candidates.”

Watson agrees, and says Republicans can expect more hard-fought GOP primaries in the future as the party becomes even more entrenched in the commonwealth.

Self says the race is an interesting reflection on McConnell, for whom Cameron served as legal counsel.

“It’s really clear that Sen. McConnell tried to clear the field, and that Sen. Schroder decided that he wasn’t going to do that,” says Self.

The winner of that primary will face former Attorney General and former state House Speaker Greg Stumbo, who ran unopposed on the Democratic side. Watson says Stumbo’s long track record in Frankfort gives Republicans a “plentiful cornucopia” of things to attack. Self says Stumbo is a deeply experienced candidate who’s actually done the job of attorney general whereas both of the Republicans have very slim résumés, he says.

Watson applauds Commissioner Quarles for his work to improve food security in the commonwealth. He says that’s benefitted low income Kentuckians in rural and urban areas who struggle to put food on their tables.

Reynolds says Quarles deserves credits for those efforts, but she says at the same time, the Bevin Administration has cut food stamp benefits. She calls providing canned goods to poor people a “Band-Aid” that does not the address the root causes of poverty.

Watson and Crigler say Republican leaders in Frankfort have worked to use finite resources to help as many vulnerable families as possible while also growing jobs and wages that will help move people off welfare. Watson adds that the problems that exist in the commonwealth are the result of former Democratic majorities failing to address them.

“Even if you don’t like the changes that have been made the last couple of years, I think most people would agree we can’t go back to the way that it was, which is largely what the Democratic candidates are offering,” says Watson. “Going backwards is not an acceptable solution.”

Reynolds says part of the problem is that Republicans don’t spend enough time with poor and minority individuals, who may or may not vote, to learn about the challenges they face.

“I think you spend time where you think you can get votes,” Reynolds says of GOP candidates, “and if you can’t get votes and you need that community, then change your policy.”

KET will have primary election results and analysis, starting Tuesday at 7 p.m. Host Renee Shaw welcomes veteran journalists Al Cross and Ronnie Ellis, as well as party representatives Sannie Overly for the Democrats and Ellen Williams for the Republicans. 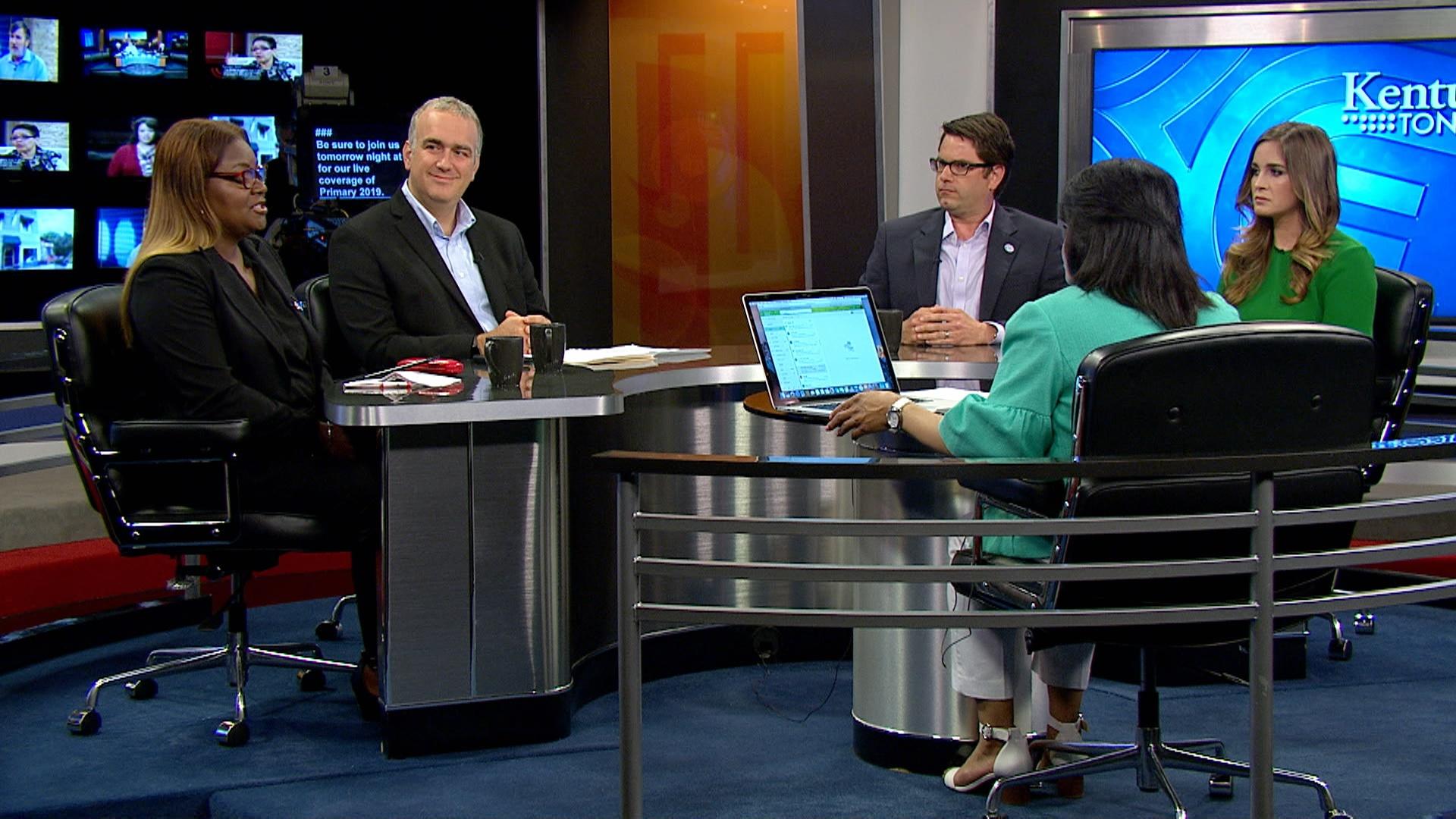