National media and Hollywood celebrities have questioned the state’s pandemic voting procedures, which include limiting polling locations from a typical 3,700 sites to fewer than 200 sites. But Democratic National Committee member Susanna French says the critics are missing some important facts – mainly that Gov. Andy Beshear, a Democrat, and Secretary of State Michael Adams, a Republican, agreed to a plan to allow a massive expansion of absentee voting by mail as well as a period of early, in-person voting.

The state’s two largest counties, Jefferson and Fayette, each have only one polling location, which has raised concerns about ballot access today, especially among poor and minority voters. Tres Watson, a former Republican Party of Kentucky spokesman, says individual county clerks decided how many polling places to have in their counties. Democrat Don Blevins is the clerk in Fayette County while Republican Bobbie Holsclaw is the clerk in Jefferson County.

Democratic political strategist Mike Ward says the one polling location in Jefferson County at the state fairgrounds is “equally inconvenient for everyone.” He contends voting should be as easy as getting money from an ATM, and that Republicans want to limit access to the ballot.

“They do not want to set a precedent to make it really easy to vote in Kentucky because in November they don’t want it to be easy to vote,” says Ward.

Republican political strategist Kelsey Cooper rejects that notion. She says the state has done a good job providing as many voting locations as possible given concerns over the highly contagious coronavirus.

“Republicans and Democrats are coming under fire a little bit and that’s because this is unprecedented,” says Cooper. “We all need to step back for a second and take a deep breath and realize there’s a lot of fear, there’s a lot of big issues going on right now.”

2) It May Not Matter Who Wins the Democratic Primary for U.S. Senate

For months it looked like Amy McGrath would easily win the 10-way Democratic primary for U.S. Senate to face incumbent Republican Mitch McConnell. The retired Marine Corps fighter pilot is massively funded, has the support of the national Democratic establishment, and has substantial name recognition from her failed bid for Congress two years ago.

But the recent demonstrations over police brutality and racial injustice helped fuel interest in challenger Charles Booker, a state legislator from Louisville. His presence at rallies protesting the police shooting of Louisville EMT Breonna Taylor helped catapult the young Democrat into the statewide and national limelight. Booker has gained the endorsements of Senators Bernie Sanders and Elizabeth Warren and New York Congresswoman Alexandria Ocasio-Cortez. One recent poll even showed Booker leading McGrath in the final weeks of the campaign.

Ward says Booker’s surge may have come too late for him to overtake McGrath, especially with the early voting that already has occurred in the race. He says whichever Democrat wins the primary, the nominee will have a terrific argument to make against McConnell, the current Senate Majority Leader.

Cooper says there’s no question that McConnell can beat either Democrat.

“It does not matter who the candidate is,” says Cooper. “They have the most liberal, socialist, progressive Democrats behind them, and that is completely antithetical to everything that Kentuckians believe in and vote in.”

McConnell, who is seeking his seventh term in Washington, continues to battle low approval ratings among Kentuckians. He even faces a primary challenge from six other Republicans, including former state representative C. Wesley Morgan of Richmond. But Watson notes that McConnell had approval ratings in the mid-30s in 2014 and still defeated Democratic challenger Alison Lundergan Grimes by 14 points that year. Watson says McConnell’s base has grown even stronger since then.

“I think a lot of Kentuckians look at Sen. McConnell and they say, ‘Well, I don’t necessarily like him that much, but he’s ours and we’re keeping him,’” says Watson. “I think they know that he, regardless of what they think of him, delivers for the state.”

The senator has run an extensive series of campaign ads during the primary, including a spot that ties him to President Donald Trump, who remains popular among many Kentuckians. But French says the Trump coattails may not be enough to carry McConnell to victory this year.

“Sen. McConnell’s unpopularity is fueling voter enthusiasm, both in financial resources and otherwise across the country to see a change of leadership in the Senate,” says French.

Watson says he thinks it’s unlikely that McConnell can be unseated, but he says that won’t stop national Democrats from throwing millions of dollars at the race. He argues that Democrats would be wiser to spend that money on tighter Senate races in Colorado and Arizona.

In Kentucky’s 4th Congressional district, incumbent Republican Thomas Massie faces a primary challenge from Covington trial attorney Todd McMurtry. Some pundits considered Massie vulnerable because he has rankled members of his own party and for his early lackluster fundraising totals. But Cooper says that was a miscalculation. She says the incumbent has now raised millions of dollars and he remains popular among his constituents.

“With all of the changing tides and the different issues,” says Cooper, “you can always trust that Congressman Massie is going to do exactly what he said he’s going to do.”

Watson says restrictions brought on the pandemic make it especially tough for challengers like McMurtry to connect with voters and build a base of support.

“Knocking off an incumbent Congressman in a primary is a very hard thing to do,” says Watson. “It’s doubly hard when you’re deprived of a lot of the traditional tools of an insurgent candidate – you can’t have rallies, you can’t be knocking on doors.”

“The recent polling shows that Joe Biden is beating Donald Trump in that district, which shows Andy Barr may be more vulnerable,” says French.

Also looking to the fall campaign, Ward says he’ll be watching the 2nd district race against incumbent Republican Brett Guthrie. Democrat Hank Linderman is running unopposed in the primary, and Ward says the musician and recording engineer from Falls of the Rough is gaining attention in national Democratic circles for his policy statement called the Contract for Rural and Working America. Ward says it’s critical for Democrats to reconnect with rural voters who have tended to vote Republican in recent elections.

“Things are changing in America with the demonstrations and the police issue we’ve had in our country,” says Ward. “Things are changing and people’s minds are open to more and more things, so I think we’ve got plenty of time between now and November to get our message to rural voters.”

Today’s voting includes a special election to fill the unexpired term of Republican state Sen. Ernie Harris, who is retiring after 25 years representing Oldham County and part of Jefferson County. That race features Democrat Karen Berg, a radiologist in Louisville, and Republican Bill Ferko, a businessman and horse farm owner in Prospect.

Watson expects Berg to win that race based on the Democratic enthusiasm that he says will spill over from the U.S. Senate primary. But he says the seat will likely flip back to Republican in the next regular election.

Among other state Senate races, Watson says he’s watching the Republican primary in the 21st district where incumbent Albert Robinson of London faces two challengers. Robinson has served in the state House and Senate off and on since 1972, and Watson says that long a tenure can lead to party in-fighting over a seat.

Watson says he’s also following several House races where Democratic officeholders are retiring from seats in Republican-heavy districts. Those races include the 22nd district in south-central Kentucky, the 39th district in Fayette and Jessamine Counties, and the 47th district located between Louisville and Cincinnati. 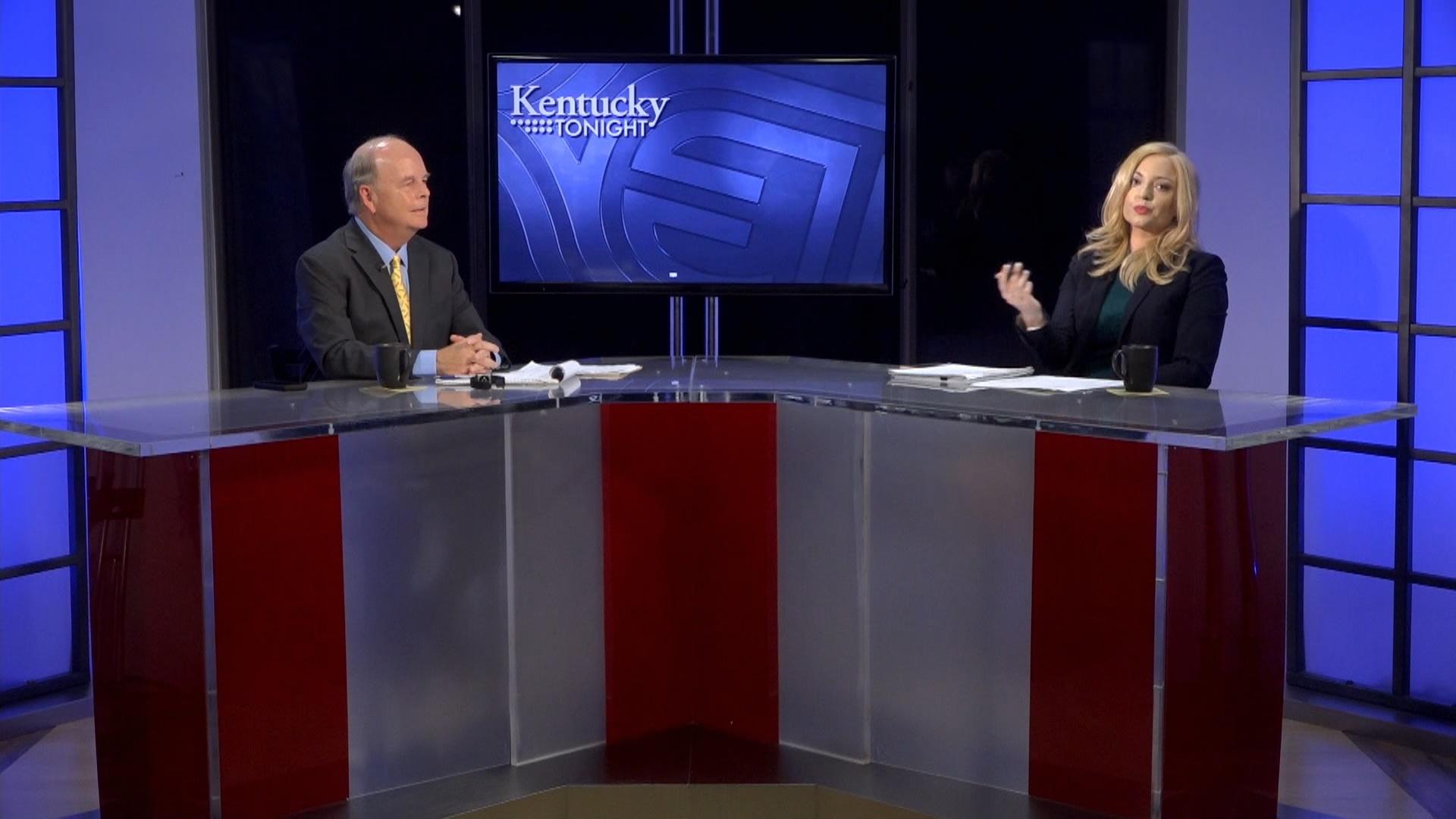