Next year marks the 30th anniversary of passage of the landmark Kentucky Education Reform Act (KERA) that made sweeping changes to how public schools in the commonwealth operate and are funded.

The legislation garnered national acclaim for the state and generated dramatic improvements in primary and secondary education. But in the last decade, that progress has faced a series of daunting challenges, including funding cutbacks brought on by the 2008 financial crisis, achievement gaps among certain student groups, declining academic outcomes in reading and math, and school safety issues.

With a new gubernatorial administration taking over in Frankfort, concerned teachers, parents, and students are hoping for a revival of K-12 education. In their inaugural remarks last week, incoming Gov. Andy Beshear and Lt. Gov. Jacqueline Coleman, herself an educator, echoed that sentiment.

"Starting today, public education is a top priority in Kentucky," said Coleman, who is also the new secretary of the Education and Workforce Development Cabinet.

"If our public schools, especially those in struggling areas, are going to survive and thrive, we need to make sure that they are adequately funded," said Beshear. "This is not a partisan issue, this is a Kentucky issue."

On his first day in office, Beshear issued an executive order to replace the existing Kentucky Board of Education with all new members. The Democrat said the new board was selected based on their education experience and commitment to improving public schools, not on their partisan affiliation.

But the action drew criticism from several of the ousted board members, who argue their jobs are protected by Kentucky law, and from GOP leaders in the legislature who say Beshear did not consult with them on the action and failed to appoint any Republicans to the new board.

Brigitte Blom Ramsey, president and CEO of the Prichard Committee for Academic Excellence, served on the state board from 2008 to 2014. She says members usually are appointed on a staggered basis so no single governor can select an entire board. Ramsey says KERA created a new governance model for schools designed to protect public education from partisan politics.

"We hope that as we move into the [2020] legislative session, the governor and the General Assembly will work together... to clarify the intent of the law and get us back to a place where education is a protected, professional space," says Ramsey.

Beshear's overhaul could still be challenged in court. Under state law, board members cannot be removed from office prior to the end of their term without due cause.

"The true cause at the end of the day is that we need to do what's best for our children," says Allison Slone, a special education teacher in Rowan County and an ex-officio, non-voting member of the new board. "We want to look at this as a restart... and get people in place to help figure out what we need to do... and put our state back on the track to improving education."

Among the community leaders who comprise local school boards, there is a sense of relief about the new state board, according to Eric Kennedy, director of advocacy for the Kentucky School Boards Association. He says board members should be as experienced as possible and represent all Kentuckians.

"We hope the state board of [education] will and continue to be apolitical," says Kennedy, "not necessarily bipartisan or even nonpartisan."

Whether Beshear's board is allowed to stand, Bluegrass Institute for Public Policy Solutions Education Analyst Richard Inness says the members must focus on making much-needed improvements to education in the commonwealth.

"For me, meaningful progress involves making some very, very strong changes in the status quo," says Innes, "from the way we’re doing governance in our schools right now to helping our teachers with professional development that really works."

Innes is particularly rankled by the fact that Mississippi, which traditionally lags behind Kentucky in education outcomes, recently surged ahead of the commonwealth in reading and math scores among fourth graders.

Innes attributes the academic improvements in Mississippi to that state adopting a more scientific, structured approach to reading instruction, and tightly controlling how teachers are trained to use that approach.

Kentucky teachers aren't yet trained in that approach, according to Slone. She says improving reading skills among Kentucky children is critical.

"It's really hard to ask students to do better, reach proficiency, to get great social studies scores, science scores, and all those other things if they’ve gotten through third grade without being able to read," says Slone.

"So what we're seeing in Mississippi is a commitment to three things that we know work," says Ramsey. "We need to get back to providing the professional development, the thought-leadership to double down in that space that worked for us in the 1990s and will work for us again."

Comparing the scores of students in Mississippi to those in Kentucky may not be fair, though. Kennedy says one major difference is that the opioid crisis has hit the commonwealth far harder than any other state. He says that's impacted families and students in ways that educators are struggling to address.

Funding is also an issue: Even while lawmakers approved record high per-pupil spending in the last state budget, Kennedy says overall spending on public education is down thanks to cuts to things like student transportation, textbooks and professional development for teachers.

Kennedy says it's not just a matter of more money for schools, it's how that money gets allocated.

"It really needs to be more about improving each and every school in every community, no matter what its demographics are, no matter where it is, with the best that we can all provide together," says Kennedy.

Slone says teachers and school administrators also feel burdened by unfunded mandates. One example is the school safety measure approved by lawmakers earlier this year. Senate Bill 1 requires school districts to tighten security on school campuses and hire more counselors and school resource officers. But that bill included no funding mechanism to pay for those changes. (Lawmakers have pledged to try to find the money when they craft a new state budget during the 2020 General Assembly session.)

"You have this legislation and it’s great and it’s been mandated, but there’s no funding behind it," says Slone. "How are we supposed to do that and do everything else we’re supposed to do?"

Seeing the decline in math and reading scores, and persistent achievement gaps, especially between white and black students, the Prichard Committee is urging lawmakers to invest $1 billion new dollars over five years in all education in Kentucky, from early childhood to college.

But Innes isn't convinced that more money is the answer. He says Mississippi made their math and reading gains even while paying teachers an average of $8,000 less per year than Kentucky educators, and by allocating about $1,900 less in per-pupil spending.

"They are getting phenomenal bang for the buck," says Innes. "I don’t think that we are… We need to do some very careful looking at what are we spending the money on, and maybe we have enough money but we're not spending it wisely."

For example, Innes says the state could save money by updating existing school facilities rather than constructing new buildings. He says that savings could be put towards teacher salaries.

Another education item that has yet to be funded is charter schools. Lawmakers passed enabling legislation in 2017 that allows school districts to create charters, but they failed to allocate money for such schools in the 2018 budget session.

Charter advocates hope to revisit the funding issue during the 2020 session. Innes says a group in northern Kentucky hopes to win approval soon for the state's first charter school. He says the River Cities Academy planned for Newport could secure necessary funding from out-of-state interests.

The charter school issue has sparked intense debate among education advocates in the commonwealth. Some fear charters will drain money away from traditional public schools. Others contend that parents in districts with failing schools need more education options for their children.

"Whether you like it or not, and think the state should go in that direction or not, there is research to suggest that charters can be effective for specific populations of students that we’re not serving well," says Ramsey. "African-American students [and] students living in deep poverty in urban areas."

Another hotly debated school-choice option is a proposed tax credit for individuals who contribute to nonprofit organizations that provide scholarships for K-12 students to attend private schools. Proponents say the measure would benefit poor families who couldn't otherwise afford educational alternatives for their children.

Both the Prichard Committee and the School Boards Association oppose the scholarship tax credit. Kennedy estimates such a tax credit could reduce state revenues by $25 million in the first year and by as much as $100 million in subsequent years. He contends Kentucky can't afford that kind of revenue loss when facing massive obligations for education, public pensions, and Medicaid.

"We can't forgo a single penny when we have needs like this," says Kennedy. 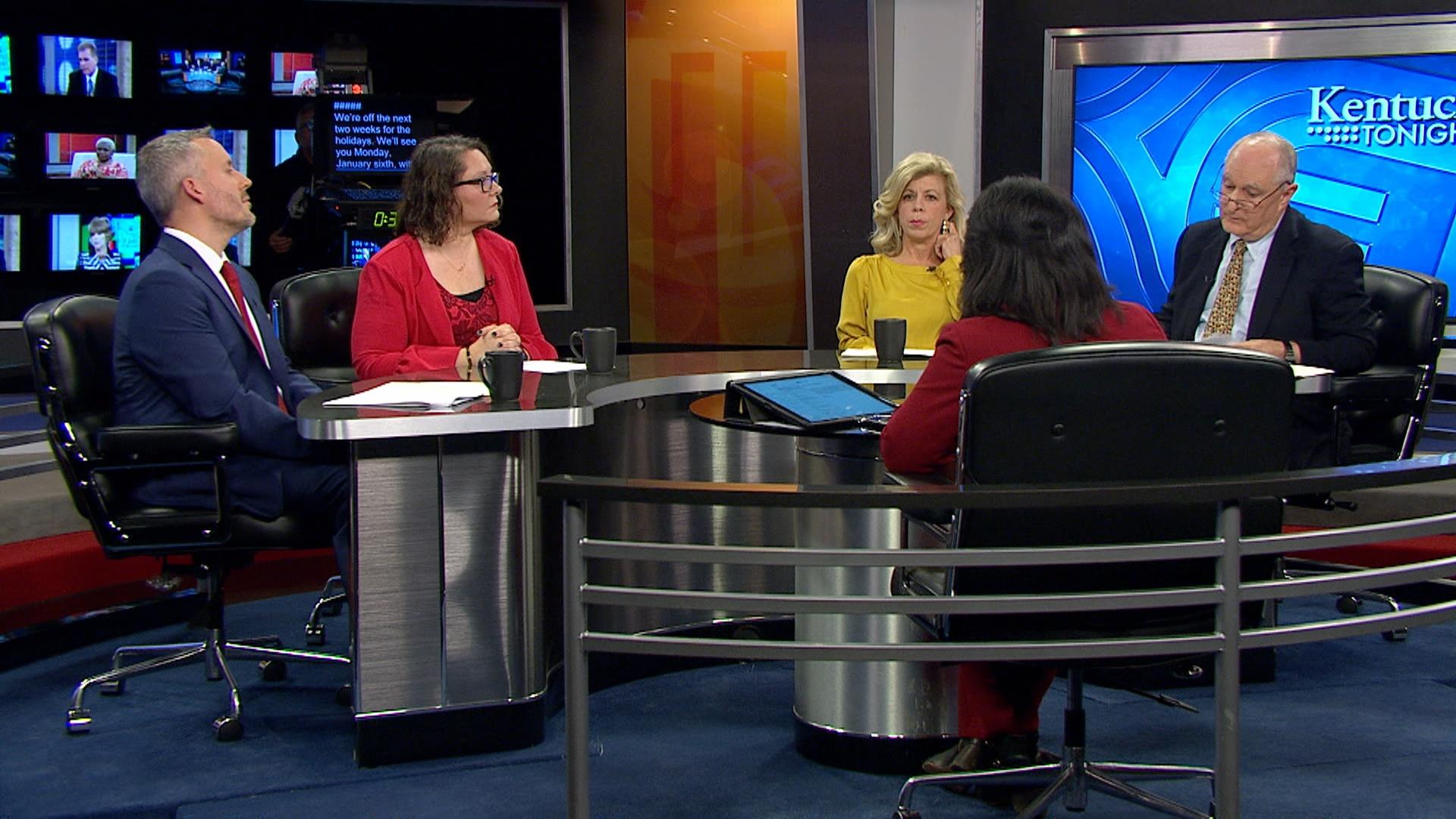