In the course of one meeting, the state’s incredibly bad pension problems got even worse.

By updating a few basic assumptions about how the Kentucky Retirement Systems (KRS) plans are funded, the estimated total of unfunded liabilities went from about $32 billion to about $40 billion.

The options for addressing the debts that have state spending in a choke-hold range from switching to a 401k-type plan and cutting benefits, to raising more tax revenues and moving state assets into the system to help shore it up financially.

KET’s Kentucky Tonight explored the latest on the pension woes with Sen. Joe Bowen (R-Owensboro), chair of the Senate State and Local Government Committee; Rep. James Kay (D-Versailles), a member of the legislature’s Public Pension Oversight Board; Dave Adkisson, president and chief executive officer of the Kentucky Chamber of Commerce; and Jason Bailey, executive director of the Kentucky Center for Economic Policy.

On May 18, the KRS board of trustees approved new assumptions that are meant to provide a more realistic view of the finances of the system. Instead of projecting a 6.75 percent rate of return on investments, KRS will now assume a 5.25 percent return, says Sen. Joe Bowen. At the same time the trustees dropped the projected rate of state employee payroll growth from 4 percent to 0.

Not only did that cause the unfunded liabilities in KRS balloon to some $40 billion, it pushed the state’s annual payments upwards as well. Bowen says KRS will need an additional $700 million per year on top of the $1.5 billion the state already appropriated for the pension plans in the coming fiscal year.

“That’s over 13 percent of our general fund budget,” Bowen says. “This is arguably the greatest challenge that the commonwealth of Kentucky has had in the last half century.”

And it’s a problem that’s been years in the making. In addition to the overly optimistic financial assumptions, recent governors and legislatures failed to make the actuarially required contributions (ARC) to the systems, especially during the recession years. In fact Bowen says between 2006 and 2016, KRS had a $7 billion negative cash flow.

As a result the Kentucky Employees Retirement System (KERS) non-hazardous plan now only has about 13 percent of the money it needs to pay retiree benefits in the decades ahead. That makes it one of the worst-funded public pension systems in the nation. It also impacts state spending and hurts the state’s credit rating, says Dave Adkisson of the Kentucky Chamber of Commerce. He says the chamber has been sounding the alarm about pension debts for more than a decade.

“We’re 47th in the country in terms of our pension debt relative to the size our state’s budget,” says Adkisson. “So we’re at the bottom of the heap, down there below Illinois, below Connecticut, and below California. The day of reckoning is here.”

In contrast to the 13 percent of funding for KERS, the average pension plan around the country is about 76 percent funded, says Jason Bailey of the Kentucky Center for Economic Policy. He says many other states use similar assumptions for their retirement plans, yet don’t have the funding issues that Kentucky does because they made the proper ARC payments to their systems.

Bailey credits lawmakers with finally making the full ARC for KRS in 2015 and the ARC plus some additional money in the new state budget. The question, he says, is what happens next.

“This is a long-term challenge,” says Bailey. “We won’t solve it in the next year, the next five years, or the next 10 years. The important thing is that we get on the right track with funding.”

Since the KERS non-hazardous fund is by far the most depleted of the state plans, Bailey says it has the greatest need for a cash infusion. Other state pension plans also have funding issues. He says the County Employees Retirement System is about 60 percent funded, and the Teachers’ Retirement System (KTRS) has about 55 percent of the moneys it needs. Reports indicate the state police pension plan is about 26 percent funded while the retirement program for state legislators is 79 percent funded.

More Money for the Plans
In recent legislative sessions, lawmakers have attempted to stem the financial bleeding and address concerns about management of the plans. For example, reforms passed in 2013 placed new state hires into a cash-balance retirement plan, required future cost-of-living increases be fully funded before implementation, and mandated the state to pay the full ARCs.

Going forward, lawmakers and pension officials have a range of options to consider both from the funding side and the payout side.

“One of the innovative solutions to bring more money into the pension fund would be to use some of our state assets, and put them into our pension fund to try to build that,” says Rep. James Kay. “Businesses like to do that – they put in-kind contributions into their private pensions for their employees.”

While that might provide a bigger pool of funds from which to generate investment returns in the future, Bowen says transferring assets wouldn’t address the immediate cash flow needs in KERS.

Kay also suggests creating a dedicated source of revenues, such as earmarking cigarette tax proceeds to the pension crisis. In past General Assembly sessions, some pro-gaming legislators proposed putting expanded gambling revenues towards the pension liabilities.

If all else fails, Kay says there’s a simple way to guarantee that KRS gets all the money it will need in the future.

Other Possible Changes
Some Republican lawmakers, including Gov. Matt Bevin, advocate moving new hires into a defined contribution or 401(k)-type plan, which they argue would generate significant savings for the state in the future. Adkisson says he thinks that’s a wise move for state employees, but he isn’t sure if it’s a viable option for teachers since they are not eligible for Social Security.

Bailey says 401(k)s would be bad for workers, creating the potential of more uncertain retirement earnings, and an unwise fiscal choice for the state.

“If we move to 401k, not only does it shift the risk over to the workers but it will starve the existing system of resources because you no longer have those regular contributions from the employees and the employers into the existing plan,” Bailey says. “So the cash-flow challenge will become much worse if you do that.”

He contends the current defined benefit-type plan is better because it gives workers a more secure retirement and helps the state attract better qualified employees.

Lawmakers could also choose to make so-called structural changes to the pensions plans – that is, change the benefits that retirees receive. Some but not all of those benefits are covered under an inviolable contract with workers and retirees. Legislators would risk legal action if they tried to alter those benefits.

But Bowen says they could change things like the employer contribution rate, cost-of-living adjustments, and benefits for new hires. (He notes that the teacher plan has slightly different benefits covered by the inviolable contract.)

Bailey and Kay argue it would be unfair for lawmakers to cut benefits to retirees, especially since they have made their mandated contributions while the state has failed to meet its pension obligations in recent years. They also contend state workers have already endured too many pay freezes and benefit reductions in the past. And they say the benefits themselves are modest and are largely funded by the employee contributions and the earnings on those investments.

Adkisson describes the current benefits package as “rich” and he says it should be “modernized” as a way to save costs. Otherwise, he says there could be unintended consequences in other parts of the state budget, especially for teachers.

“We fully support idea of paying competitive benefits to attract the talent you need in the classroom,” says Adkisson. “But if we don’t fix this problem and you can’t give raises for teachers for another 10 years, who are you going to be able to attract to the profession?”

Prospects for a Special Session
Gov. Bevin has proposed a special legislative session for later this year to enact both pension reforms and an overhaul of the state tax codes so as to generate more revenues. Some legislators have questioned whether it’s wise or feasible to tackle both issues in the same special session.

Bowen, a Republican, says he fully expects Bevin to call lawmakers back to Frankfort to address both taxes and pensions. Kay says a special session is unnecessary and would be a waste of taxpayer dollars. The Democrat contends the General Assembly could take up both issues when it convenes for a 60-day session next year. [Editor’s note: Bevin announced Tuesday, June 6, that he will call for a special session to begin sometime after Aug. 15, 2017.]

Adkisson says the tax and pension problems are too big and too complex and therefore warrant a dedicated session this year. He says lawmakers will have their hands full in 2018 to get a state budget passed. Bailey says the debate on any such changes needs to start sooner rather than later, and that the public needs ample opportunity to be involved in that conversation.

The public is invited to share their comments and ideas at the next meeting of the Public Pension Oversight Board, which is scheduled for June 26 in Frankfort. 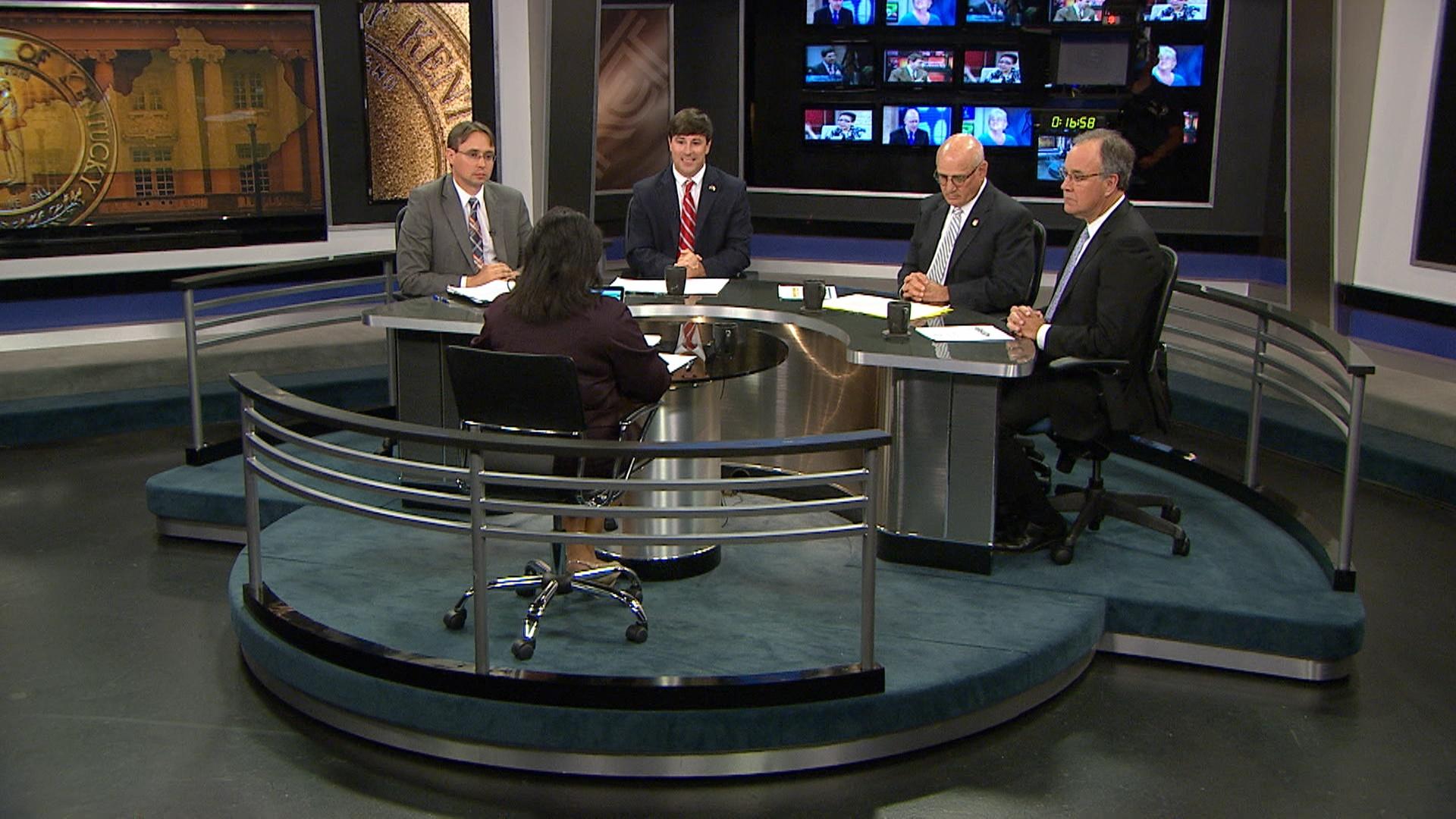