Wednesday (Feb. 28) at noon, a legislative committee will convene for what is expected to be the first public discussion of Senate Bill 1, the long-awaited public pension reform bill.

The new plan stops short of placing all newly hired government employees and teachers into a 401(k)-style retirement plan, as Gov. Matt Bevin had proposed. But it does bring other significant changes to the retirement benefits public workers will receive in the future.

401(k) Plan Deemed Too Expensive
Gov. Bevin’s original pension reform plan met stiff opposition from retirees and current workers for proposing to place all new public employees and teachers into a 401(k)-type retirement plan instead of the traditional defined-benefit pension plan. Current workers who stayed on the job past 27 years of service would also have been shifted over to the new defined-contribution plan.

The governor’s plan also mandated that all working teachers and government employees would have to contribute 3 percent of their salaries to help fund retiree health benefits.

The bill, Senate Bill 1, drops those provisions. Sen. Joe Bowen says those employees currently in a defined-benefit plan will remain in that plan, regardless of how long they decide to work. But newly hired teachers will be enrolled in a hybrid cash balance plan that has features of both a traditional pension plan and 401(k)-type retirement packages common in the private sector. (Most state workers hired since 2014 have been placed into a similar cash balance program).

Last week Bowen said his team decided to reject the call for 401(k)-type retirement packages because switching from the existing defined-benefit plan to a new defined-contribution plan would have cost the state $400 million over 20 years.

Most current workers will not have to contribute 3 percent of their paychecks to retiree health care. Only those state employees hired between 2003 and 2008 will be expected to make that payment. Bowen says 3 percent is the maximum those workers would have to contribute. He says it could be less, depending on actual health care costs, and the employee contribution would be phased in over several years. The senator also says this provision of SB 1 could be changed by a forthcoming committee substitute to the legislation.

Changes for Teachers and Legislators
Bowen says actuaries estimate SB 1 will save the state $4.8 billion over 30 years. (A full analysis of the plan has not been made public yet.) The biggest part of that savings – about a third, says Bowen – comes from cost of living adjustments for retired teachers. Instead of getting 1.5 percent annual increases, teachers would now get adjustments of .75 percent for 12 years. The governor’s original plan offered no COLAs for five years.

The Kentucky Center for Economic Policy estimates that one change could cost some teachers as much as $73,000 of retirement income. Even at the full 1.5 percent, Rep. James Kay says the teacher COLAs are still significantly lower than the adjustments offered to those on Social Security, which Kentucky teachers aren’t eligible to receive. Plus he says they deserve the full COLA because they paid to prefund them.

Bowen says the COLA reduction for retired teachers is still under discussion and could also be amended in the committee substitute.

Other changes in SB 1 include a cap on how workers use accrued sick time to boost their pension benefits, and an end to the inviolable contract between new hires and their employers. Bowen says under the new hybrid cash balance plan, such contracts detailing guaranteed retirement benefits are no longer necessary.

SB 1 ends a practice that has drawn much criticism: the so-called “super-sizing” of legislator pensions. Lawmakers have been able to increase their pensions by taking higher-paying state jobs after leaving the legislature. The senate bill would adjust those pension payments down to what former lawmakers earned only during their service in the legislature. Bowen says the benefit factor will also be lowered for lawmakers, but he says the legislator pension program will not be combined with the state employees’ plan as had been previously discussed.

Kay says he believes legislators should be moved into the state employee retirement system.

“I think they need to be in the same fund, in the same situation and face the same fears and anxieties that state employees feel,” Kay says.

Paying Down the Pension Liabilities
The legislation also calls for a level dollar formula to retire the unfunded pension liabilities, which Bowen says now total about $53 billion. Instead of paying a percentage of payroll into the pension systems, the state would now pay an equal amount each year for 30 years to retire that debt. However, local governments and school districts that participate in the County Employees Retirement System (CERS) would be granted a phase-in period to ramp up to the level-dollar funding payments required of them.

Sen. Robin Webb admits that the retirement programs do need an infusion of cash, but she argues that level dollar funding is unnecessary given previous reforms to the pension plans. Plus she says it puts an undue burden on the state budget and support for government functions like public education. The new biennial spending plan proposed by Gov. Bevin puts more than $3 billion toward the pension systems.

“We’re going to penalize everything else at the expense of front-loading the pensions that we don’t need to do right now,” Webb says.

Bowen says the level-dollar formula is critical to keeping the pension programs solvent and paying off the unfunded liabilities.

“What perplexes me is that people can find fault with that,” Bowen, says. “I would hope that they would embrace the fact that we are going to make sure that those pensions are going to be there for the folks who have earned them.”

Bowen is the sponsor of SB 1 but he says the legislation is the work of more than dozen lawmakers who spent weeks developing the plan and reviewing actuarial data. Rep. Jerry Miller says they also had dozens of calls and meetings with groups representing current and retired employees and teachers.

“Senate Bill 1 is a testimony to leadership of the House and the Senate, seeking input from all parties,” Miller says “This is a better bill because of those meetings. We listened.”

The Need for More Revenue
The Kentucky Education Association and other groups have praised the parts of SB 1 that roll back pension changes that the Bevin Administration sought. But there’s still concern that portions of the new bill could run afoul of the inviolable contract between public workers and their employers. And Democrats continue to argue that tax modernization needs to be part of the debate.

Kay, who is a member of the Public Pension Oversight Board, has proposed his own set of reforms that include dedicated revenue streams for the pension programs. His Kentucky Promise Plan calls for an increase to the state cigarette tax and a $1 levy on all opioid prescriptions. Kay’s proposal also creates a pension premium on state contractors that use outside labor, and it institutes a thorough review of all state tax incentives as well as an $85,000 cap on all executive branch salaries.

“If we are in this pension crisis… then why are paying executive branch employees $240,000 a year, why are we giving raises to the top-level officials?” Kay asks. “The reality is the executive branch is bloated, it’s top-heavy, and it sends the wrong message to state employees who are working hard every day just to have their benefits cut.”

“It’s troubling and disturbing when you have school districts and counties facing the numbers that they’re facing now, how they’re going to remain solvent and carry on basic governmental functions,” Webb says. “There’s a level of fear out there that’s very legitimate.”

Webb resists the notion that the pension programs are in crisis, saying that they are structurally sound as long as they are properly funded. She fears that pension reforms that scale back retiree benefits will make it harder for the state to attract quality employees and teachers. The Democrat points to a letter that lawmakers received earlier this month from a group of prominent Kentucky Republican activists and business leaders that called for an end to defined-benefit pensions for new hires. That letter was co-signed by national anti-tax activist Grover Norquist, who Webb says has an agenda to end public employee pension programs and privatize public education in the United States.

Republicans say tax reforms that could generate more revenues by creating a more competitive business climate are coming. But they say the pension crisis must be addressed first.

“The pension bill is the first serious attempt to resolve an issue that’s been growing for 16 years,” Miller says. “Pension reform is step one. Step two is the budget… and then step three is going to be tax reform. So this isn’t the end, this is more the beginning.”

Bowen says he’s fully aware of the financial pressures facing municipal governments and schools, and his team tried to address those concerns. He says he also understands and agrees with the desire to offer better compensation to public school teachers. But the senator says SB 1 is vital to resolving what he says is the biggest financial crisis to ever face the commonwealth.

“Should one vote no on this measure and should this measure fail, I really believe that those folks are going to be on the wrong side of history because if this bill fails, I really believe that these systems will continue to languish and some will fail,” Bowen says. “This is the opportunity to right that course and finally address an issue that’s been hanging over us for decades.”

The Senate State and Local Government Committee is expected to discuss SB 1 Wednesday at noon. KET will provide live TV coverage of that meeting on KET-KY and streaming at KET.org/legislature. 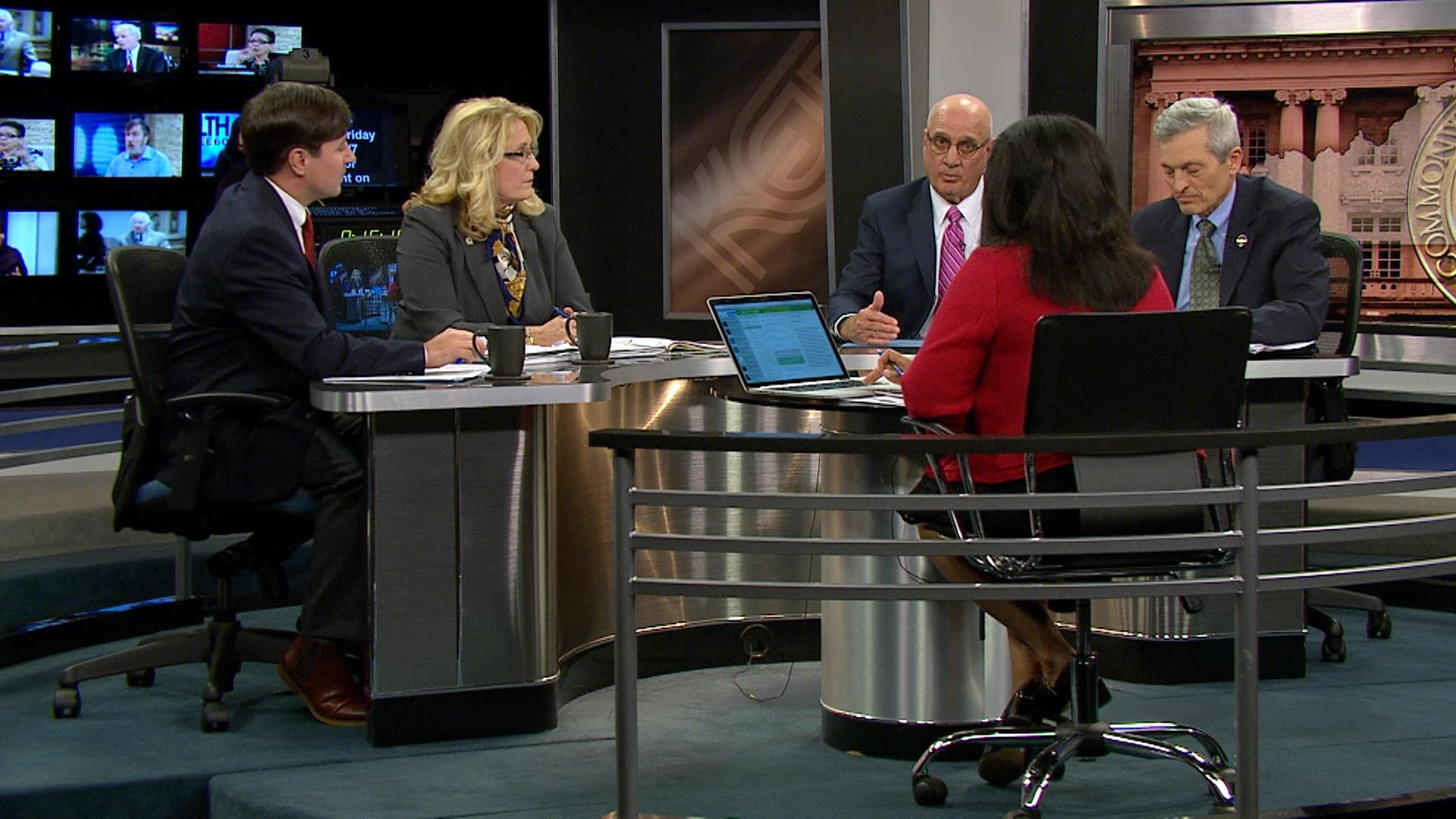