The threads of systemic racism are tightly woven into American society, especially in public education, where Black youth can face a range of challenges. Research indicates that students of color lag behind white classmates in academic performance in many of Kentucky’s schools. Black students are less likely to be included in gifted and talented programs or advanced placement classes, and they are more likely to be disciplined, suspended, or expelled

“We have failed to serve our African-American students,” says Brigitte Blom Ramsey, President and CEO of the Prichard Committee for Academic Excellence. “We need to own that truth, we need to understand the causes with honesty, and we need to identify solutions.”

The issue isn’t just simple equity for students, says Roger Cleveland, director of the Center for Research on the Eradication of Educational Disparities at Kentucky State University. He says it’s a matter of racial equity.

“When we talk about equity, we’re talking about access and fairness and things like that for all students,” says Cleveland. “Racial equity is making sure that race should not be a barrier to academic success.”

Cleveland says conversations about racial equity must move from the margins to the center of civic dialogue in the commonwealth and nation. It’s a conversation in which educators and school administrators, parents and students have a role to play, according to Andrew Brennen, co-founder of the Prichard Committee Student Voice Team and a 2014 graduate of Lexington’s Paul Laurence Dunbar High School.

“People recognize that if we want to achieve racial justice in our society, it is a project that everyone has to be a part of whether you’re black or white,” says Brennen.

Promoting Diversity Among Teachers and Administrators

Without the encouragement of a Black teacher, Ashley Lamb-Sinclair wouldn’t have pursued a career in education.

The 2016 Kentucky Teacher of the Year credits long-time Danville Independent Schools teacher Robert Trumbo for recognizing her gift for teaching and encouraging her to enter the profession. Lamb-Sinclair says all students benefit from having teachers of color like Trumbo.

“It makes children better when they have diverse people in their lives,” she says. 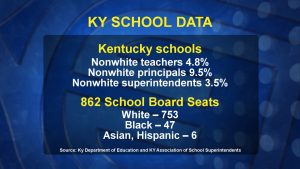 But most students in the commonwealth don’t have the benefit of learning from a teacher of color because nearly 95 percent of educators in Kentucky schools are white, according to the state Department of Education. People of color are also underrepresented in school leadership positions: only 10 percent of principals and 3.5 percent of superintendents are nonwhite. People of color also comprise only 13 percent of school board members across the state.

“I didn’t see a teacher of color until I got to graduate school,” says Berea Independent Schools Superintendent Diane Hatchett.

Her own rise through the educational ranks had its challenges. Hatchett says people would question why she wanted to become a principal or superintendent. The tenor of job interviews would suddenly change when hiring panels realized she was Black. But Hatchett says it’s important for educators and administrators of color to be role models for students.

“Somebody has to be a path-setter,” she says. “It’s not easy. You have to get boards to be open to diversity and to not think that you’re less qualified because you happen to be African American.”

But given the current disparity between white and non-white teachers, Kentucky schools have enormous ground to make up. Ramsey says the state needs at least 3,000 teachers of color to equal the proportionality of students of color in the commonwealth’s classrooms.

State education officials are working to attract more minority teachers, but lawmakers failed to fund a key program in the Kentucky Department of Education that recruits, mentors, and provide financial support to minority teacher candidates. The state Board of Education along with Lt. Gov. Jacqueline Coleman, who is also secretary of the Education and Workforce Development Cabinet, want the General Assembly to restore funding for the Kentucky Academy of Equity in Teaching. She also wants teachers statewide to take implicit bias training to learn how they may unconsciously act on prejudices or stereotypes they may hold.

“All of our children are better prepared for their future when exposed to a diverse community of leaders and teachers,” says Coleman.

But even extra recruitment efforts may not be enough to bring appropriate levels of diversity to the state’s classrooms, says KSU’s Roger Cleveland.

“We don’t have a large pool of African American students coming through the teacher education program,” he says. “So the issue is continue to recruit teachers of color, but also we prepare teachers at our universities [to] teach whoever walks into their classroom.”

But hiring more minority teachers is just one step to unpacking years of deeply entrenched racial problems that permeate education, according to Ashley Lamb-Sinclair, who is now a National Geographic Education Fellow.

“Systemic racism is a problem in all of our schools, and it is infiltrating all of the practices that we do all the time,” she says.

Those practices include discipline. Black students are suspended at higher rates than white students for the same infraction, says Cleveland. 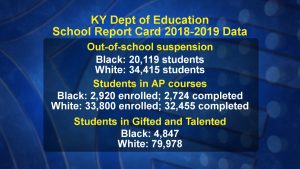 For the 2018-2019 school year, Black youth received 37 percent of out-of-school suspensions even though they only comprise about 11 percent of the school population, according to state data.

At the same time, students of color are far less likely to participate in advanced educational programs. Blacks comprise less than 1 percent of students in Kentucky’s gifted and talented programs or enrolled in advanced placement courses.

Damien Sweeney, program coordinator for comprehensive school counseling in the Office of Teaching and Learning at the state Department of Education, says there are many traditional barriers that keep students of color out of those programs, such as the need to pass a certain test or have a recommendation from a teacher. He also says many African American parents don’t even know that such programs are an option for their children.

Sweeney says one way to level that playing field is to have open enrollment in AP classes, “which allows any student from any background, whether it’s an ethnic background, whether they’re special education, it doesn’t matter. If you want to take the challenge of an AP class, you can take it.”

Even the youngest learners can suffer from racial inequities in education. Ramsey says white and Black students enter kindergarten at about the same level of preparedness. But by the time they reach third grade, there can be as much as a 20-point difference in math and reading scores between the two groups. She says that change can’t be fully attributed to the family environment since those students had roughly the same readiness when they started school.

“What happened in kindergarten through third grade that allowed for a 20-point difference in outcomes?” says Ramsey. “Those are the courageous conversations we need to have to understand why is that the case.”

She says the causes can include implicit bias as well as lower expectations for Black students. Educators may also lack the cultural competence to understand the life experiences and social challenges that minority students bring into the classroom.

Sweeney says Black students can also suffer from dehumanization, in which they internalize negative feelings that society has about them. He says Black students that exhibit behavioral problems are often placed in special education classes rather than given mental health referrals. And they can also suffer from vicarious trauma from being exposed to constant video replays of Blacks being killed by police officers.

“Because of that, we’ve got to really be prepared... to address that racial trauma, not only with our students but specifically with our staff,” says Sweeney.

School counselors could help students with trauma and other mental health concerns, but Brennen says the counselor-to-student ratio in Kentucky is twice the recommended average. The state is working to increase the number of counselors, but it’s also funding armed school resource officers to serve as security. Brennen contends that’s a mistake.

In a resolution adopted this month, the Kentucky Board of Education affirmed its commitment to racial equity and acknowledged that the state’s public schools have a history of inequity. The document says students and staff of color are often left out of important conversations, and education officials have allowed achievement gaps among students to persist and in some cases increase.

Brennen says students are ready to participate in and even lead discussions on racial issues in their schools. He says in recent years, Black students in Louisville and Lexington have formed student unions, protested racist statements made by school administrators, and spoken publicly about their experiences with racial profiling.

“Students in particular are oftentimes the most valuable but least-tapped resource when it comes to conversations about how to improve our schools and dismantle some of these systems,” says Brennen.

Berea Schools Superintendent Diane Hatchett says teachers and administrators have a moral obligation to address racism in schools since they are the ones educating future generations. 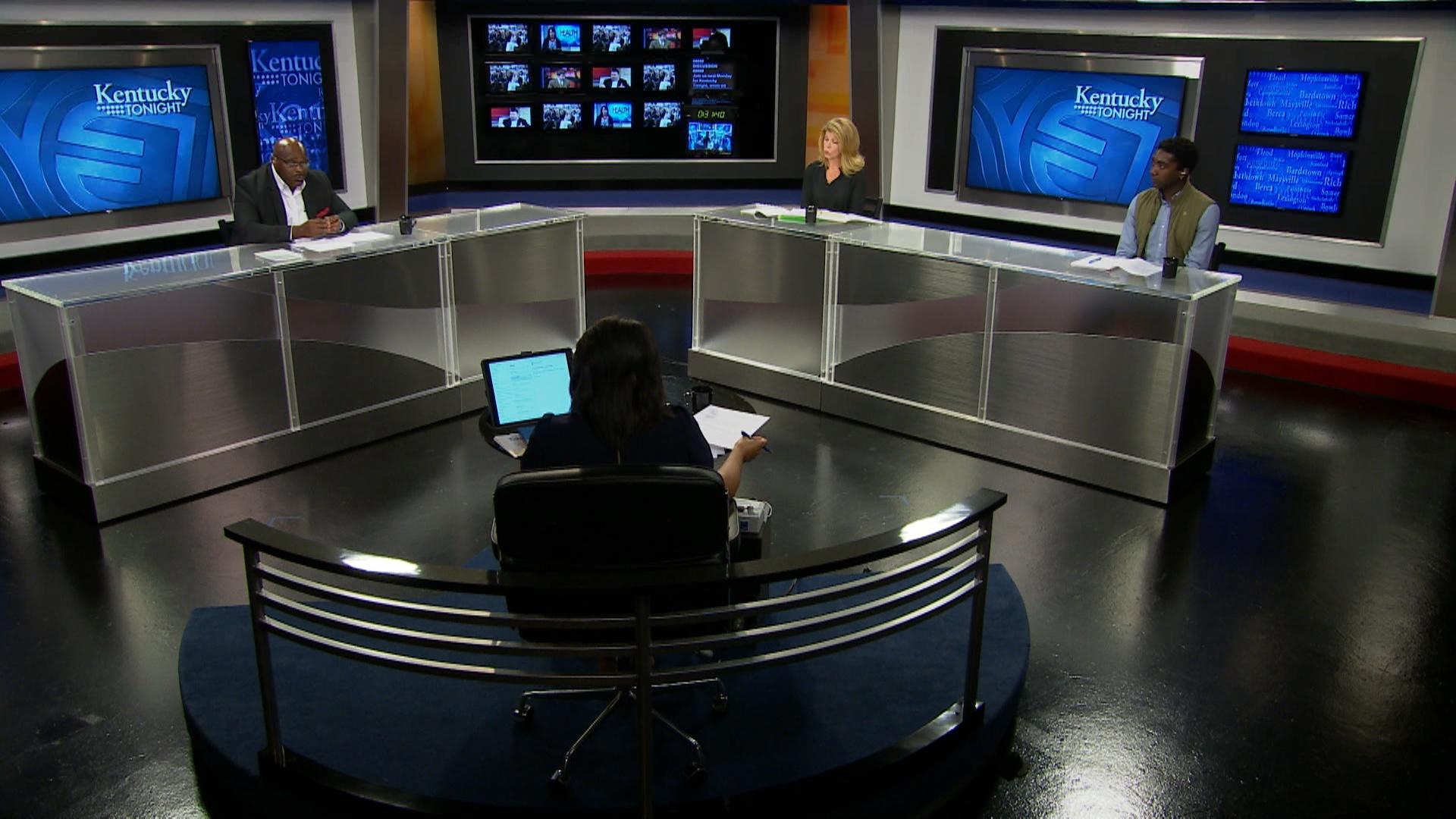