Republican Candidates for State Treasurer Discuss Their Goals for the Office

Candidates running in the Republican primary for Kentucky State Treasurer appeared on Monday’s edition of Kentucky Tonight on KET. Here’s a recap of what the contenders had to say about themselves and several key fiscal issues facing the commonwealth.

Allison Ball is a native of Floyd County and a bankruptcy attorney in Prestonsburg. She says her job is to help get people out of debt and get their financial houses in order, and she’s eager to do the same for Kentucky. Ball also served four years as Assistant Floyd County Attorney, prosecuting child abuse cases. Ball calls the office of Treasurer a watchdog position.

“We need somebody with a backbone, [so] you get somebody who’s been a prosecutor and somebody who’s a bankruptcy attorney,” Ball says. “I’m excited to get in there and be a watchdog for our state money.”

Kenneth Churchill Imes is a six-term state representative from Murray and vice chair of the House State Government Committee, which oversees the state pension systems. Imes is a funeral director and is the fifth generation to run his family’s funeral home. He is also a former deputy secretary for the Kentucky Natural Resources Cabinet, and has owned and operated seven different businesses.

“Being in business, you learn to balance the books,” Imes says. “So I think that the extensive experience that I’ve had personally and professionally has prepared me well for this.”

Characteristics of a Treasurer
Imes says the treasurer should be a person of integrity and have business experience. He contends state government should be run like a business and be more focused on planning for the future.

Ball says a public servant should hold the position of treasurer and do the job as a calling. She adds that the treasurer should have a financial background and a willingness to fight as a watchdog of state funds.

First Actions in Office
Both Ball and Imes say one of the first things they would do upon taking office would be to perform an audit of the treasurer’s office. Ball describes herself as a “limited government, fiscal responsibility” person, so she says she wants to ensure that state money is being spent as wisely and efficiently as possible.

Imes adds that as treasurer, he would never issue a check that the Kentucky General Assembly hasn’t authorized. He says he would also closely review all personal service and no-bid contracts made within state government.

Monitoring State Financial Matters
Ball argues that fiscal stability for the state depends on ensuring that spending is done appropriately. For example, she questions a 2014 action by Attorney General Jack Conway to target pharmaceutical company settlement funds to drug rehabilitation facilities. She contends the attorney general’s office doesn’t have the authority to allocate state money in that way.

Although he acknowledges the General Assembly’s authority over budget matters, Imes contends legislators generally don’t provide enough detail in the state budget to ensure that money is properly spent. He is also critical of how the executive and legislative branches raid targeted pools of money such as professional dues and licensing fees to help fill larger gaps in the state’s general fund.

Managing State Investments
Both candidates agree that the Kentucky Retirement Systems need better management and oversight. The State Treasurer sits on the board that monitors the teacher pension system as well as the overall state investment board and the Kentucky Lottery board.

Imes says there needs to be more transparency on those boards to ensure that investments are properly handled. He says he would use two of the non-merit positions available in the Treasurer’s office to hire individuals with investment backgrounds to help monitor those transactions. He would also advocate for outside audits of the state pension systems.

Ball says she would be a voice for conservatism and fiscal responsibility on those boards, especially for the Kentucky Teachers’ Retirement System. Ball also wants to explore structural changes to KTRS because she contends the way the system has been managed in the past isn’t working.

As for addressing the $14 billion unfunded liability in KTRS, Ball says she opposed a recent proposal by House Democrats to issue $3.3 billion in state bonds to help shore-up teacher pensions. She says she isn’t comfortable with a plan that would increase state debt by more than a third. Imes says he did vote for that measure when it passed the House in February, but only because he wanted to encourage the Senate to address the pension-funding problem.

Innovation and Transparency
Ball and Imes want to bring more transparency to the treasurer’s office by making more information about state spending available to the public online. Ball points to how the state of Ohio has a website with its financial information, and says she would like to find a less expensive way to replicate that for Kentucky.

Imes wants to employ social media to inform the public about state spending activities so citizens can help ensure their elected officials are operating within their constitutional boundaries.

See the video and read a recap of the Kentucky Tonight conversation with Democratic candidates for treasurer. 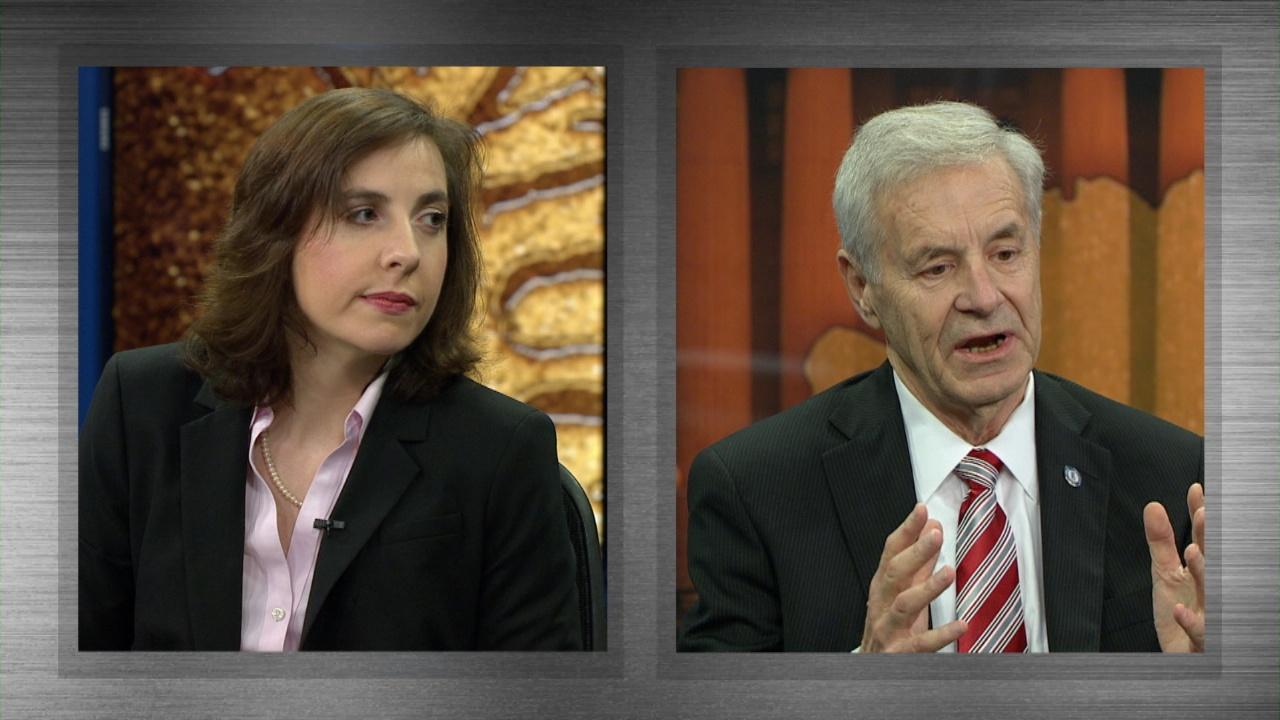