It sounds like a good deal: An individual or business makes a donation to a qualified non-profit organization that uses those funds to provide educational scholarships to students so they can attend the private K-12 school of their choice.

In return, the donor gets a nearly dollar for dollar credit on their state income taxes, in addition to being able to deduct the charitable donation from their federal income taxes.

Supporters of these scholarship tax credits see it as a way to provide school choice options to low- and middle-income students who might otherwise be locked into attending an under-performing public school.

Giving Students More Academic Options
Proponents of the tax credits say wealthier Kentuckians already have a variety of options for educating their children, especially if their local public schools don’t fit their needs. Charles Leis of EdChoice Kentucky says those parents can afford to place their kids in private schools or to move to another district where the public schools are better. They can also hire tutors to work with a child who has particular academic needs or interests.

But what if your child is foundering in public school and you don’t have the financial means to pay for private education? Andrew Vandiver of the Catholic Conference of Kentucky says low- and middle-income families deserve to have the same options that wealthier families do.

“When a child has the opportunity to be in a classroom that best fits their needs, they going to do better academically,” says Vandiver. “For some children that’s going to be a public school, but others, they may need a nonpublic school option.

How the Proposed Program Would Work
In the 2017 General Assembly Session, House Education Committee Chairman John Carney (R-Campbellsville) and Sen. Ralph Alvarado (R-Winchester) sponsored legislation in their respective chambers to create a scholarship tax credit program. Their bills provided for $25 million in tax credits in fiscal year 2018 to go to individuals and corporations that donate to qualified scholarship granting organizations. Within six years, the cap on available tax credits could reach $76 million.

Those wishing to contribute to a scholarship organization would have to get pre-approval to receive the tax credit from state revenue officials. The credit is valued at 90 percent of the contribution, so a $1,000 donation would yield a $900 credit against state taxes owed. The state will issue the tax credits on a first-come, first-serve basis until the annual cap is reached.

The commonwealth must certify scholarship-granting organizations receiving the donations. These non-profit entities must distribute at least 90 percent of their receipts to scholarships for use within the commonwealth. Kennedy says three such organizations already exist in the state: the Alliance for Catholic Urban Education in Covington, as well as School Choice Scholarships, and the Catholic Education Foundation in Louisville. (Although two of those groups are affiliated with the Catholic Church, Kennedy says children receiving aide do not have to be Catholic.)

Students eligible to receive one of these scholarships must come from families where annual household earnings are not more than 200 percent of income needed to qualify for reduced-price meals at school. For a family of four, that would be an annual income of about $91,000, according to the Kentucky Center for Economic Policy.

“You have to demonstrate need,” says Leis. “The lower your income level the higher percentage of the need that you get awarded to you.”

Students seeking scholarships could already attend a private school or they could use the money to leave their public school for a nonpublic option. A provision of the proposed legislation would also allow scholarship money to pay for services like occupational and speech-language therapy for special needs students.

Scholarships can cover the costs of tuition and required fees to attend a certified, nonpublic, K-12 school in the commonwealth. Opponents contend these nonpublic schools don’t face the same accountability measures as public schools. Under the proposed legislation private schools wanting to participate in the program would have to complete a certification process through the Kentucky Department of Education.

A Lack of Nonpublic School Choices
Vandiver says studies indicate that educational outcomes for all students improve in states that have tax credit scholarships as a school choice option. He says that’s because students in the program get the type of instruction that best serves their needs, while teachers in public schools can devote more of their time to the students who remain in those classrooms.

But in Kentucky the number of available educational options depends in large part on where you live. Eric Kennedy of the Kentucky School Boards Association says a number of public school systems do offer magnet programs or districts of innovation schools that provide more specialized instruction, but he says those options tend to be clustered in wealthier, more populous districts like those in the ‘Golden Triangle’ between Louisville, Lexington, and northern Kentucky.

That’s also where the majority of certified nonpublic schools are located, according to Kennedy. He says two-thirds of all state school districts don’t have a private school option that would qualify for the tax-credit scholarship program. That would leave many students in rural parts of eastern, southern, and western Kentucky unable to benefit from the program, he says.

Kennedy is also concerned that there simply won’t be enough scholarship money to help the number of students who may want it.

“There’s always going to be someone who can’t qualify – it can never be enough money,” says Kennedy. “The only thing that can guarantee that each and every child in the state has the substantially equal access to the same opportunity is in the public schools.”

Vandiver says this year’s scholarship tax credit proposal was just the first step in broadening school choice in Kentucky – and it would have helped thousands of students.

“We’re moving from having no choice whatsoever for low- and middle-income families too often to trying to introduce choice into the system,” says Vandiver. “That’s going to take time to work.”

Budget Concerns and Constitutional Questions
Then there’s the potential impact on state finances. Kennedy contends Kentucky simply can’t afford to lose $25 million to $76 million in tax revenues at a time when state finances are already strapped with public pension debts, crumbling infrastructure, and other needs. He fears that education budgets that were already cut during the recession years could see further reductions.

As a taxpayer, Gay Adelmann of Save Our Schools Kentucky opposes the scholarship tax credits because she says they, in effect, shift public resources to private organizations.

“I pay taxes… because I want an educated society, I want to live in a society that cares about educating all students,” says Adelmann. “I don’t want that money leaving the public education system. It’s there for the benefit of the greater good.”

Leis contends that the tax credit should have a no-net cost to the commonwealth, and he says some projections even estimate savings of $900,000 in the first year of the program. Vandiver says most studies of other tax credit scholarship programs elsewhere show positive or neutral impacts on state revenues. That’s because what the state may lose in tax revenues should be offset by lower education costs as students transfer from public schools, where the state allocates funding based on the number of pupils in attendance, to privately operated schools.

(The Legislative Research Commission wrote a fiscal note to the legislation proposed by Sen. Alavardo that says the proposal would have a negative impact on state revenues equal to the amount of the tax credit. The note also indicates there could be savings as well, but of an indeterminable amount.)

Then there are legal concerns about the scholarships. Kennedy says Kentucky’s Constitution specifically mandates that all children have equal access to same or substantially the same educational opportunities, no matter where in the commonwealth they live. He says the program could be considered unconstitutional if it results in lower state funding for poorer, more rural districts.

“I think there are some significant concerns that we would be violating definitely the spirit and perhaps the letter of our constitutional law if any of our public, common school resources and funding is given to a private school,” Kennedy says.

Even if individual public schools lose some students, Leis contends the overall system will be able to continue.

“The public system is still educating 80 percent or more of the children,” says Leis, “We’re not going to put the public schools out of business.”

With the state lawmakers already approving charter schools, Adelmann says she fears that the push for more school choice has opened a “Pandora’s box” that will lead to an increasing amount of public dollars going to private and nontraditional schools. She fears that will exacerbate the existing problems of public schools having to do more with less funding.

“If we would put the same of focus and attention that we’ve been putting on charter schools and vouchers and credits back into our public schools and help the community get engaged in public schools again, we could solve these problems,” Adelmann says. 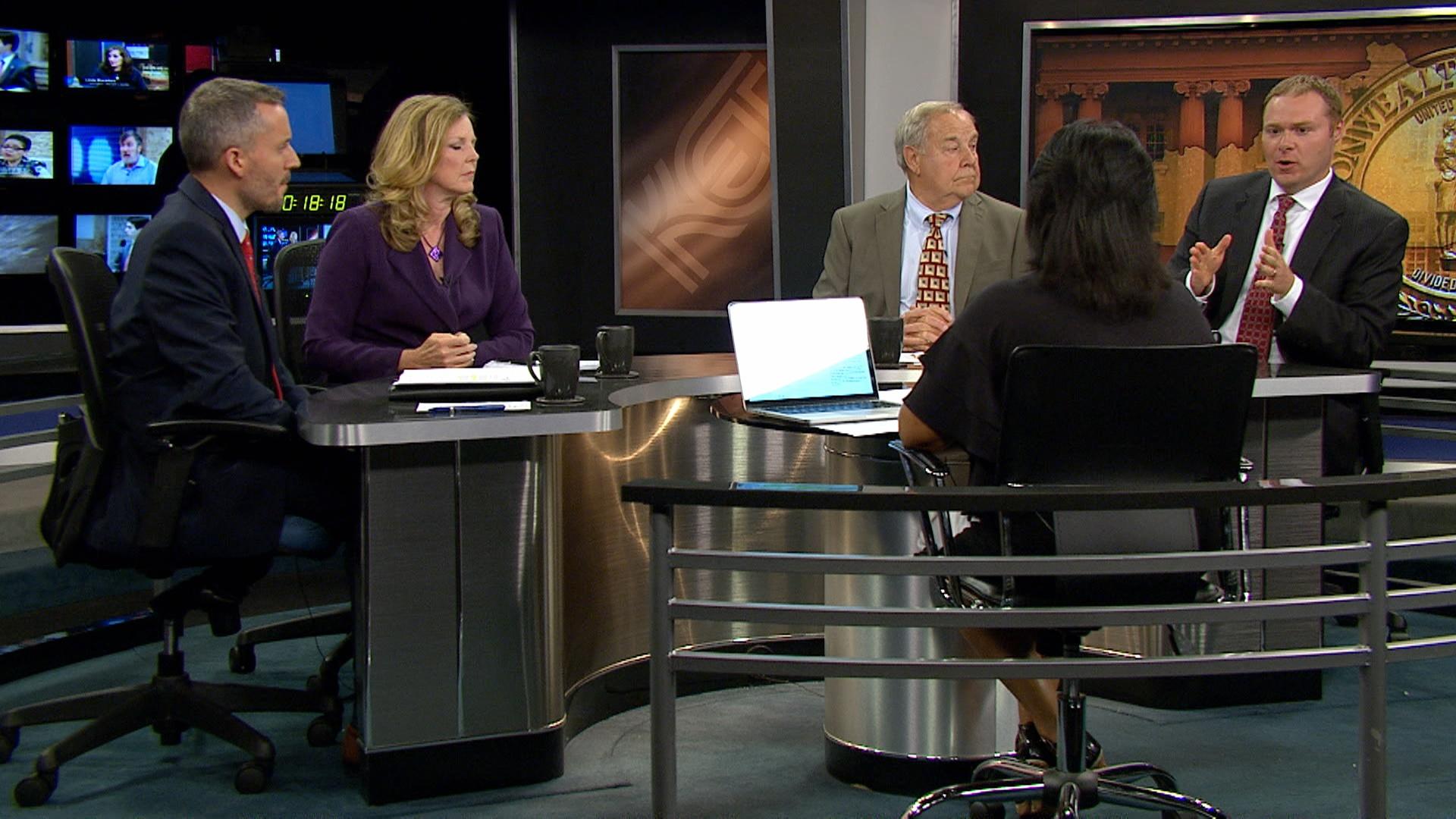