Last spring, in the wake of a shooting that left two Marshall County High School students dead and 14 others injured, state lawmakers discussed several ideas for improving the safety of children in Kentucky’s classrooms.

Instead of rushing a bill through the 2018 General Assembly, legislators ultimately decided to take more time to study their options before considering comprehensive school safety legislation.

“With everything we dealt with in that session, we did not need a knee-jerk reaction,” says state Sen. Max Wise (R-Campbellsville). “We want to get this right.”

Wise is chair of the Senate Education Committee and co-chair of the legislature’s new School Safety Working Group. He discussed the issue on KET’s Kentucky Tonight along with state Sen. Reggie Thomas (D-Lexington), a member of the Senate Education Committee; Jon Akers, executive director of the Kentucky Center for School Safety; and Dr. Joe Bargione, a retired school psychologist from the Jefferson County Public Schools.

The 16-member working group [the legislature’s School Safety Working Group] is comprised of lawmakers as well as educators, a student, and a police trainer. Sen. Wise says the group is meeting around the state to hear testimony and collect ideas from the public. They will issue a report of their findings in December, ahead of the 2019 legislative session.

While the working group won’t propose specific legislation, Wise says he hopes the ideas the panel collects will inform bills that lawmakers may want to file. He says the goal is to make Kentucky a model for school safety, and to give local school districts the flexibility to enact the measures that they think will work best for their communities.

Here’s an overview of some of the safety measures that the working group has explored.

School Resource Officers
SROs are sworn law-enforcement personnel who are responsible for maintaining safety and security at schools. Jon Akers of the Kentucky Center for School Safety says some 270 SROs are already working in 118 counties across the commonwealth, and more are likely to be hired in the coming months.

Many of those SROs are retired police officers who are recertified by local law enforcement so they have the authority to arrest people, according Akers. He says those officers should undergo up to 80 hours of additional training on how to work in school environments. That’s designed to help the SROs learn how to build relationships with children and be mentors and counselors first, and cops last.

“We don’t want people just to think we’re pulling up a paddy wagon and see how many kids we can put in,” Akers says. “A lot of these kids relate to those officers and that mentor… mentality that they [get in] the SRO training is really good.”

But some districts may not have the money to hire SROs. In those cases Wise hopes active or retired state police officers might be willing to give their time in those communities.

Akers adds that Kentucky is one of the few states that allocates public education funding specifically for school safety measures like hiring SROs. He says every school district gets $20,000 plus an additional $13.30 per student.

Fayette County Public Schools recently enacted a new 10-point safety plan that includes hiring 50 new SROs. The entire initiative will cost $13.5 million to implement, so the school board approved a 5-cent increase on local property taxes to pay for the plan. That’s proven unpopular among some taxpayers, but Sen. Thomas says he supports the increase.

“I certainly think it’s the right way to go because you just cannot put a dollar value on saving one child’s life,” says Sen. Thomas.

The prospect of designating teachers or other personnel as armed school marshals has encountered stiff opposition in Kentucky and in other states where it’s been proposed. Akers says most local, state, and national education organizations have rejected calls to let school staff carry weapons.

Such a strategy may not even prevent injuries during a mass shooting, according to retired school psychologist Joe Bargione. He cites testimony from a military trainer who said even the most skilled marksmen and women only have 13 percent accuracy in high-stress situations. So how would a teacher with a gun perform during an active-shooter scenario, he asks. Bargione also fears for the safety of the armed teacher.

“With law enforcement, they’re trained now to go right to whoever is holding the gun to neutralize the person,” says Bargione. “They may not know that teacher, so they may misidentify that person as the potential shooter.”

Both state senators reject the idea of arming school personnel: Thomas says it would be “a disaster of catastrophic proportions,” and Wise says teachers should focus on being teachers. But Wise also says if a school district wants to enact such a policy, the state must be prepared to establish rules for training, background checks, and psychological testing that would be required of those willing to serve as school marshals.

Infrastructure Changes and Technology Tools
School facilities can be upgraded to prevent a student from bringing a weapon into the classroom or to keep strangers from entering the building. Such changes can include securing all school entrances, locking classroom doors, cameras and other monitoring devices, and metal detectors.

But Bargione says hardening school grounds with tighter security can be counter-productive. He says school officials must balance the physical safety of students with psychological concerns.

“If we harden the schools too much… then some of those young people don’t feel safe,” says Bargione. “If I’m in elementary school and I’m walking through a metal detector, [I’m thinking] did I do something wrong?”

Another part of the Fayette County school safety plan involves contracting with a technology company to monitor social media accounts of students and school personnel and then alerting officials to any activity that might represent a security risk.

“As we grow more and more tech savvy, we’ve got to use social media as a means for school safety,” says Thomas.

Researchers at Murray State University have developed a smart phone application that enables students and parents to submit anonymous tips about bullying, violence, and other potentially dangerous behaviors to school authorities. Akers says the free app is being used in more than 110 state school districts.

At the same time, Akers encourages parents to monitor their child’s cellphone usage. He says that of the 294 threats against Kentucky schools in the first four months of this year, more than half of them were made via an electronic device.

“We want parents to be looking at those phones,” says Akers. “If they see something, we want them to say something to us so we can go ahead and investigate these things and find out if they’re legit or not.”

Building Personal Relationships
According to the U.S. Centers for Disease Control and Prevention, up to 20 percent of children experience a mental disorder in a given year. Bargione says few of those kids need hospitalization or intensive outpatient care, but they do need support services.

That’s led schools to take a “trauma-informed approach” to dealing with children who experience abuse or neglect at home and may be at risk of acting out in the classroom. Bargione says that can range from teaching school personnel how to physically interact with traumatized youth, to encouraging staff to develop positive personal connections with students. He says schools can help children not only with academic work, but also with teaching them valuable life skills for problem solving, regulating their own emotions, and developing resiliency.

The more comfortable a student is with an adult at school, whether that’s a teacher, an administrator, or a lunchroom or janitorial employee, the more likely they are to share information about troubles they are going through or that a classmate is experiencing.

But a survey of 1,500 students conducted by the Prichard Committee for Academic Excellence Student Voice Team found only about half of high school students feel they have strong relationships with their teachers. Akers says research done by his organization indicates that about 75 percent of high school students say they have at least one adult they can talk to. But that still leaves room for improvement, he says.

“The more we can connect with kids, the better off we’re going to be,” says Akers.

In 45 Kentucky schools, students are taking matters into their own hands by implementing what’s called Sources of Strength. That’s a program that promotes connections among students and caring adults to prevent suicide and other destructive behaviors. The School Safety Working Group heard how students at Trigg County High School have used the program to help ensure that none of their peers feel lonely or isolated.

“The student voice is a real key piece in the discussion,” Bargione says. “As adults, we tend to think we know what’s best for young people, and that’s clearly not the case, and so having those young people as part of those conversations, at the school level, at the district level, and even at the state level, that’s really where we’re going to learn a lot.” 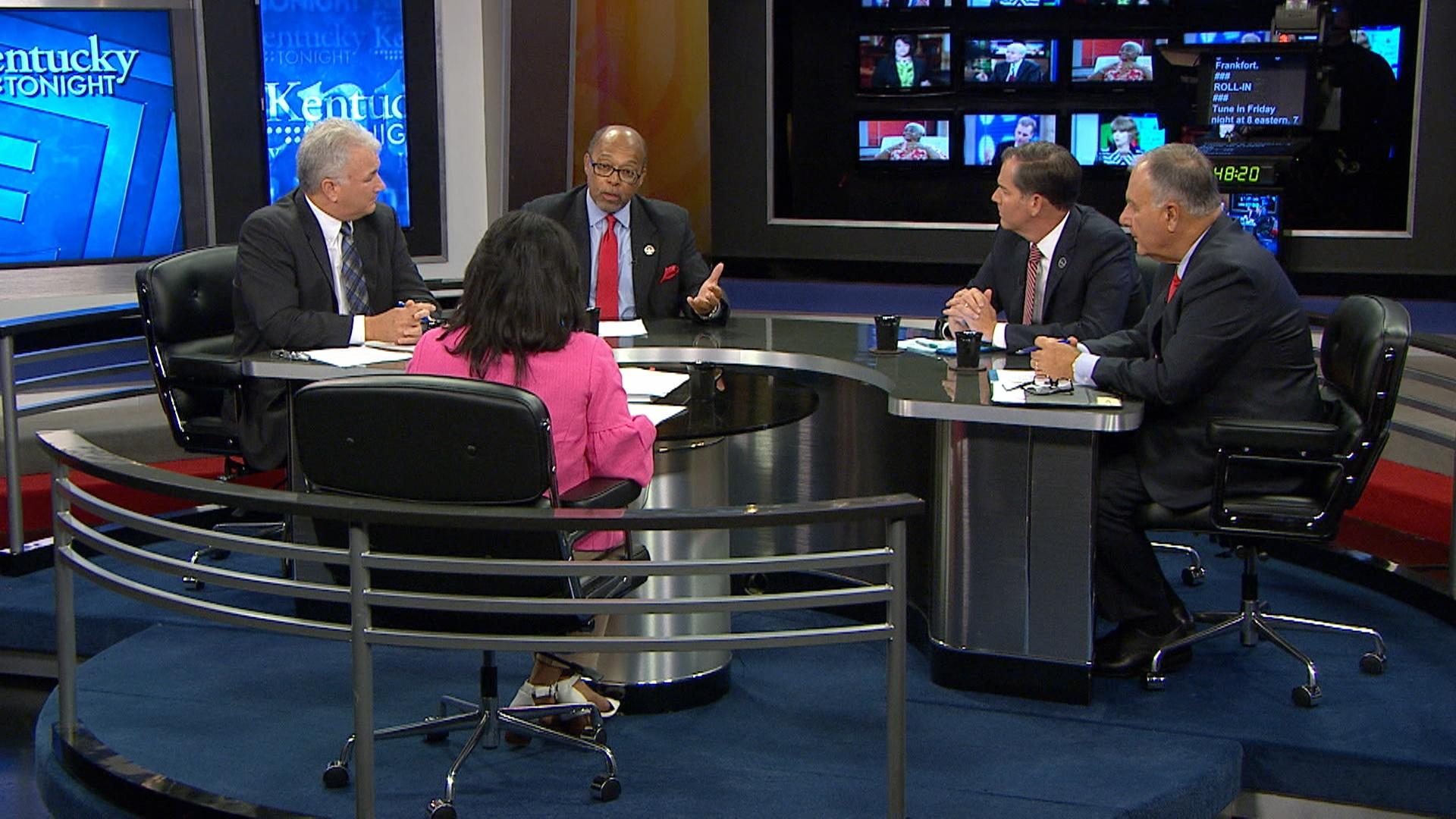