Public Employee Pensions: Where Will the Money Come From?

What can be done to fix the public employees and teacher retirement systems? That’s also easy: Pump hundreds of millions of dollars into the plans.

Where’s that money going to come from?

Four legislators, including two who served on the panel charged with finding ways to shore up the teachers’ pension plan, appeared on KET’s Kentucky Tonight on Dec. 14 to discuss a range of options for stabilizing the state retirement systems.

Looking for Long-Term Solutions
There are actually six state-level pension plans in the commonwealth, including those for state and county employees, public school teachers, legislators, judges, and state police officers. Of those, the Kentucky Employees Retirement System and the Kentucky State Teachers Retirement System garner the biggest headlines because those plans have the largest unfunded liabilities: nearly $11 billion for KERS and a projected $24 billion for KTRS, according to recent estimates.

“It’s really like a credit card payment,” says Sen. Morgan McGarvey (D-Louisville) of the unfunded liabilities. “It’s due. … and every day we don’t pay it, it gets worse.”

McGarvey, who served on the KTRS Funding Work Group that former Gov. Steve Beshear convened last summer, says if lawmakers did nothing to address the liabilities, KTRS would still remain solvent through 2036. He says the panel determined it would take 30 years to reach an optimal funding level for that system. So while current teacher benefits are secure, McGarvey says legislators must formulate a long-term strategy to pay down the liability so future benefits can be secured.

Phased-in funding for KTRS is only half of the solution for that plan, says Sen. Joe Bowen (R-Owensboro), chair of the Senate State and Local Government Committee and a member of the KTRS Work Group.

“Will the system change for new hires?” says Bowen. “It will have to change so we don’t get into the same shape that we’re in now.”

The 401(k) Debate
One prominent idea is Gov. Matt Bevin’s plan to move new hires into a 401(k)-type plan. But a move to switch teachers to a defined-contribution plan could face opposition in the legislature.

Sen. Bowen says he’s not talked with Gov. Bevin about his 401(k) proposal. As a fellow Republican, Bowen says the governor should promote the solution that he thinks is best. But he warns that legislators have their own ideas on the matter. Bowen says he along with Rep. Brad Montell (R-Shelbyville) and another lawmaker will propose legislation they’re crafting that they think will offer the best solutions to the KTRS problems.

“I think what we’re going to see moving forward will be perhaps several bills that are introduced using the things that we learned in the working group to address and solve this issue,” says Montell, who is a member of the House State Government Committee.

Benefits and the Inviolable Contract
If changing the pension structure for new hires won’t be easy, it may be impossible for people already in the system. Many of those rules are governed by what’s known as the inviolable contract, which Rep. Yonts calls a sacred trust between employees and elected officials.

“We cannot as a legislature change what has already been put into contract when they were employed,” Yonts explains. “If we do, then we’re subject to being sued and damages awarded to those employees.”

Because of that contract, Rep. Montell says lawmakers can’t reduce benefits that have already been promised, nor can they ask employees to contribute more to their pensions. He says the inviolable contract includes things like changing the number of years of service required to obtain full benefits, or changing the terms of the cost-of-living adjustment.

That leaves lawmakers reviewing benefits that aren’t contractually obligated. Montell says there are three benefits outside of the inviolable contract that cost the state a combined $70 million each year.

One of these benefits covers how teachers can use a portion of their accumulated sick days to boost their income in their final work year before retirement. Montell says lawmakers could change that benefit so that teachers would get cash for their sick days instead of being able to apply them towards their retirement. He acknowledges that change would be unpopular among teachers, especially those late in their careers, but he says the resulting savings could be applied to the unfunded liability in KTRS.

New Sources of Revenue
The legislators agree more revenue will have to be devoted to the pension systems, and they have a range of ideas for generating that cash. Sen. McGarvey says Kentuckians should finally be allowed to vote on a constitutional amendment for expanded gaming, which could include a provision to dedicate a portion of those revenues to the state pensions.

Rep. Yonts and Sen. Bowen say the state’s tax codes should be overhauled. Yonts says he’s willing to work with Gov. Bevin to update the system. He says one option is to amend the pension income exemption, which he says could generate $335 million in new revenues for the state.

“A robust economy pays a lot of bills,” says Sen. Bowen. “We need to look at Texas and some of these other states that have that robust economy and model ourselves after them.”

Lawmakers remain divided on the idea of issuing state bonds to shore up the pension plans. In the 2015 General Assembly session, House Speaker Greg Stumbo sponsored a plan to issue $3.3 billion in state bonds to support KTRS. The idea eventually died in the Republican-controlled Senate.

“With the historically low interest rates that were available last session, the thought was not really that you’re doing deficit spending,” says Sen. McGarvey, “but think of it as refinancing your mortgage.”

Republican Sen. Bowen says pension bonds are an option, but one that doesn’t have a good track record. He points to bonding plans that foundered in Illinois, New Jersey, and Detroit. Fellow Republican Rep. Montell says the only reason lawmakers should consider bonding is if that’s the only way the state could afford to pay the actuarially required contribution (ARC).

Stumbo’s bonding proposal is likely to resurface in the 2016 legislative session, and Rep. Yonts says it will probably meet the same fate as last year. While he sees the refinancing of pension debts as a way to save money, Yonts says it will take a collection of cost-saving and revenue-generating measures to come up with the money the retirement systems need.

“So there’s little bits and pieces here and there you can put together and create some cash that will help pay this ARC without doing the bonding,” says Yonts.

Looking to the New Legislative Session
The General Assembly convenes on Jan. 5, and the pension issue will loom large over the biennial budget lawmakers will craft this session. Yonts says it’s time to stop debating the causes of the pension crisis and focus on solutions to solve it.

Sen. McGarvey says lawmakers must attack the unfunded liabilities so they don’t continue to grow, which will ultimately free up money that the state can devote to other necessary projects.

Sen. Bowen and Rep. Montell say the KTRS problems can be solved with the right legislation, and they say those bills will be forthcoming early in the session.

“There’s no way we can pass a two-year budget and not fund these pensions,” says Montell. “We’re going to have to work like grown-ups and come together with this.” 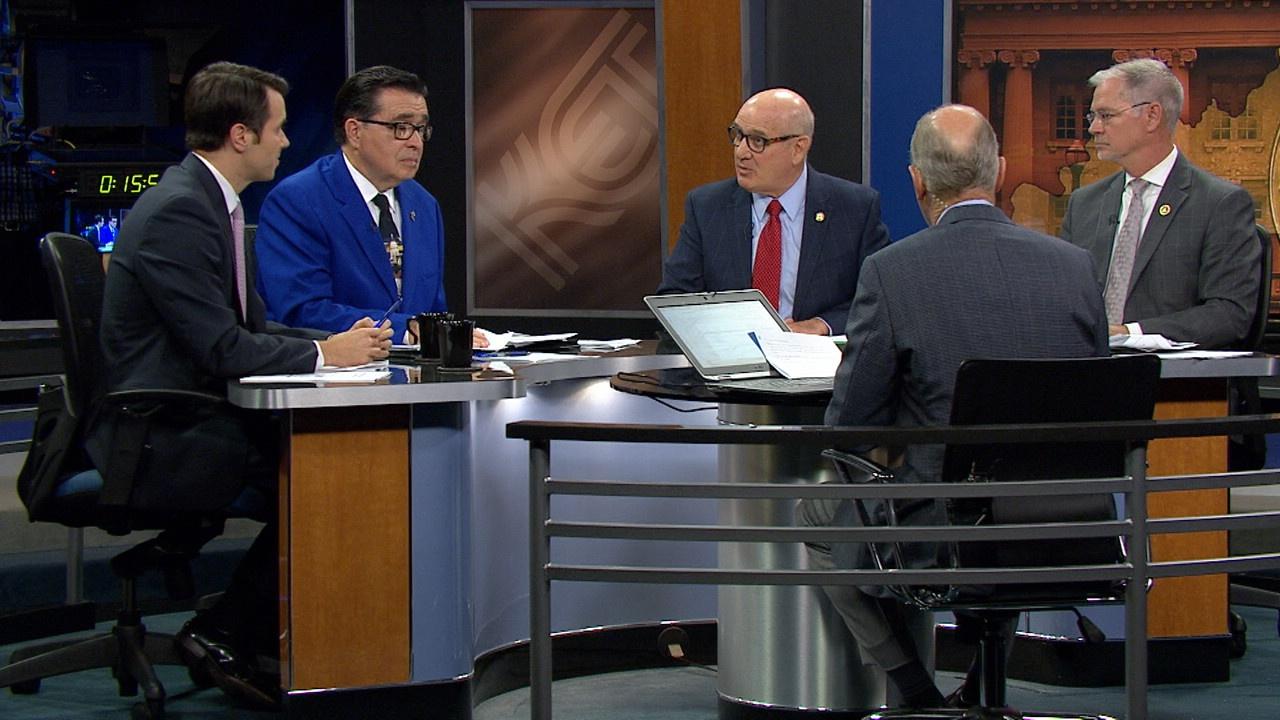