In a surprise move Monday afternoon, Gov. Matt Bevin called a special session of the General Assembly, leaving lawmakers only four hours to convene in Frankfort. The governor wants legislators to pass a new pension reform measure less than a week after the state Supreme Court ruled the pension bill enacted earlier this year was unconstitutional.

KET’s Kentucky Tonight spoke with two members of the state House of Representatives about the special session: Rep. Jerry Miller (R-Louisville), chair of the House State Government Committee, and Rep. Derrick Graham, (D-Frankfort), who is a member of that committee. Later in the program, host Renee Shaw led a discussion about the state’s new high school graduation requirements and other education issues.

Special Legislative Session
In striking down Senate Bill 151 last Thursday, the Kentucky Supreme Court did not take issue with the contents of the legislation, but rather the process by which it passed in the final hours of the 2018 regular session. Republican leaders replaced an 11-page wastewater treatment bill with a 291-page pension reform bill and passed the measure that same day.

Bevin, who was critical of the unanimous court decision, said yesterday “there is nothing ideal about the situation that has been put upon us.” The governor said the pension crisis is the single greatest threat to the state’s long-term financial health.

“We have a legal and moral obligation to provide and deliver on the promises that have been made,” Bevin said. “The only chance we have of doing that for those already retired and working toward retirement is to change the system going forward.”

Democrats said they were caught off guard by the governor’s call, which many of them were not aware of until Monday. In a statement released to reporters, House Minority Floor Leader Rocky Adkins (D-Sandy Hook) called Bevin’s move “short-sighted” and “unnecessary” since lawmakers were just three weeks away from starting the 2019 regular session.

“This is nothing more than a continued mockery of the legislative process and an attempt to silence the public,” Adkins said. “This is a sad day for the people of Kentucky.”

Republican Rep. Jerry Miller says he first heard rumors about a special session on Saturday. He says he doesn’t believe the governor would’ve convened lawmakers if he didn’t have assurances from legislative leaders that they could pass a bill.

Miller says the new reform legislation, House Bill 1, is “almost identical” to the old Senate Bill 151 that passed in late March. and to Senate Bill 1, the original pension reform legislation proposed in February. Although a few provisions have been dropped, nothing new has been added, Miler says, so lawmakers should already be familiar with what’s being proposed.

“We’re not plowing new territory in House Bill 1,” says Miller. “Everyone that has the ability to vote on it this week had eight months of opportunity to read that bill.”

But a largely similar reform proposal would still be problematic, according to Democratic Rep. Derrick Graham. He fears the new bill would still violate the inviolable contract with teachers and public employees by reducing their pension benefits, and make it harder to recruit and retain quality workers to state jobs. Graham says calling a special session a week before Christmas further undermines public trust in the legislative process.

“This special session… it really is about destroying the public pension system,” Graham says. “It’s also about getting revenge against teachers, public employees, and retirees, and attacking and disrespecting our Kentucky court system.”

Although he has no role in the pension negotiations, Kentucky Education Commissioner Wayne Lewis says it’s critical for the state to repair the pension systems that are mired in billions of dollars in unfunded liabilities.

“A failure to continue to address these significant challenges will continue to impact our ability to make strategic investments in public education,” says Lewis.

Brigitte Blom Ramsey, executive director of the Prichard Committee for Academic Excellence, agrees that action is needed. But she says where educators are concerned, the debate needs to include pay as well as benefits to ensure that the state gets the best teachers into public school classrooms.

High School Graduation Requirements
Earlier this month, the Kentucky Board of Education approved a new set of high school graduation requirements that would start with students in the classes of 2023 and 2024.

Although not as rigorous as he originally hoped, Commissioner Lewis says the requirements still mandate that high school graduates demonstrate basic competence in reading and math, either through test scores on accountability assessments taken in 8th or 10th grade, or with a student portfolio that proves their competency. Graduates will also have to complete a minimum of 22 course credits.

Lewis says the biggest changes to the requirements came in the area of transition readiness, which addresses a student’s preparedness for success in college or in the workforce. He says the board heard the concerns that some districts didn’t have the resources needed to help students meet the original readiness requirements the board proposed.

In place of those, the board approved “graduation qualifiers” that Lewis calls a step towards transition readiness. Students can fulfill the qualifiers by taking at least one Advanced Placement (AP) course or one dual-credit course. They can also complete the pre-college curriculum recommended by the Kentucky Council on Postsecondary Education, which Lewis says is the basic high school graduation requirements with the addition of two credits in a foreign language.

“While not exactly what I proposed initially, it represents an incredibly important step forward for Kentucky,” says Lewis, “and I’m excited about the possibilities.”

The state board of education also wanted stronger requirements, according to board member Gary Houchens, who is an associate professor of educational administration, leadership, and research at Western Kentucky University.

“In many ways the proposal that we approved is superior in that it is more sensitive to the resource needs that many of our districts face,” says Houchens, “and to the great variance in the kinds of challenges that students bring with them to the learning process.”

Eric Kennedy, director of governmental relations for the Kentucky School Boards Association, calls the new requirements a step in the right direction. But he says his organization still has concerns about how districts that face tighter budget constraints will be able to help their students meet the new state-mandated standards.

“Being an individual requirement for graduation, we thought, we cannot possibly let a student not graduate from things that were not in their control or even in their school district’s control,” Kennedy says.

While the new standards set the minimum requirements for high school graduation, they may not actually set meaningful requirements, says Brigitte Blom Ramsey. She says simply setting a bar for students to meet doesn’t mean graduates will actually be successful or be ready to enter college or the workforce.

Ramsey says districts statewide need a level of funding that will allow them “to radically rethink what high school looks like and how students experience high school so that they’re not only mastering the content that we know they need… but they also have opportunities to apply what they’re learning [and] to be exposed to rich opportunities in career pathways.”

While the new requirements are tougher than the state has had before, Lewis admits the bar for graduation is still low. He says it’s up to local districts to take the state minimums and build upon them given the resources they have available.

Kennedy says the board wanted to pass something that would achievable for every district at the present time. He contends that even setting these minimum standards increases the value of a Kentucky high school diploma to graduates.

Other Education Issues
Public school funding remains a core concern among education advocates. Ramsey and Kennedy say there’s been a decrease in school appropriations, especially since the 2008 recession. But Lewis says that’s not the case when you include money the Bevin administration has allocated for the pension systems.

“When you look at total spending on education in Kentucky for the last five to seven years, you actually see significant increases,” Lewis says. “I would argue and very few people would disagree that spending on public education teachers, employees, and their benefits is education spending.”

Kennedy says during peak funding years in the early 1990s after passage of the Kentucky Education Reform Act, public education appropriations including pension contributions amounted to 52 percent of the state’s General Fund. Now, he says it’s closer to 43 percent.

“If we want to increase [academic achievement and postsecondary success], we need to look at increasing the proficiency of math and the effectiveness of mathematics teaching in the state,” she says. “That’s going to require a commitment to teaching and a commitment to professional development.”

Ramsey and Lewis agree that effective teachers and high-quality classroom experiences should be available to every student in the commonwealth. 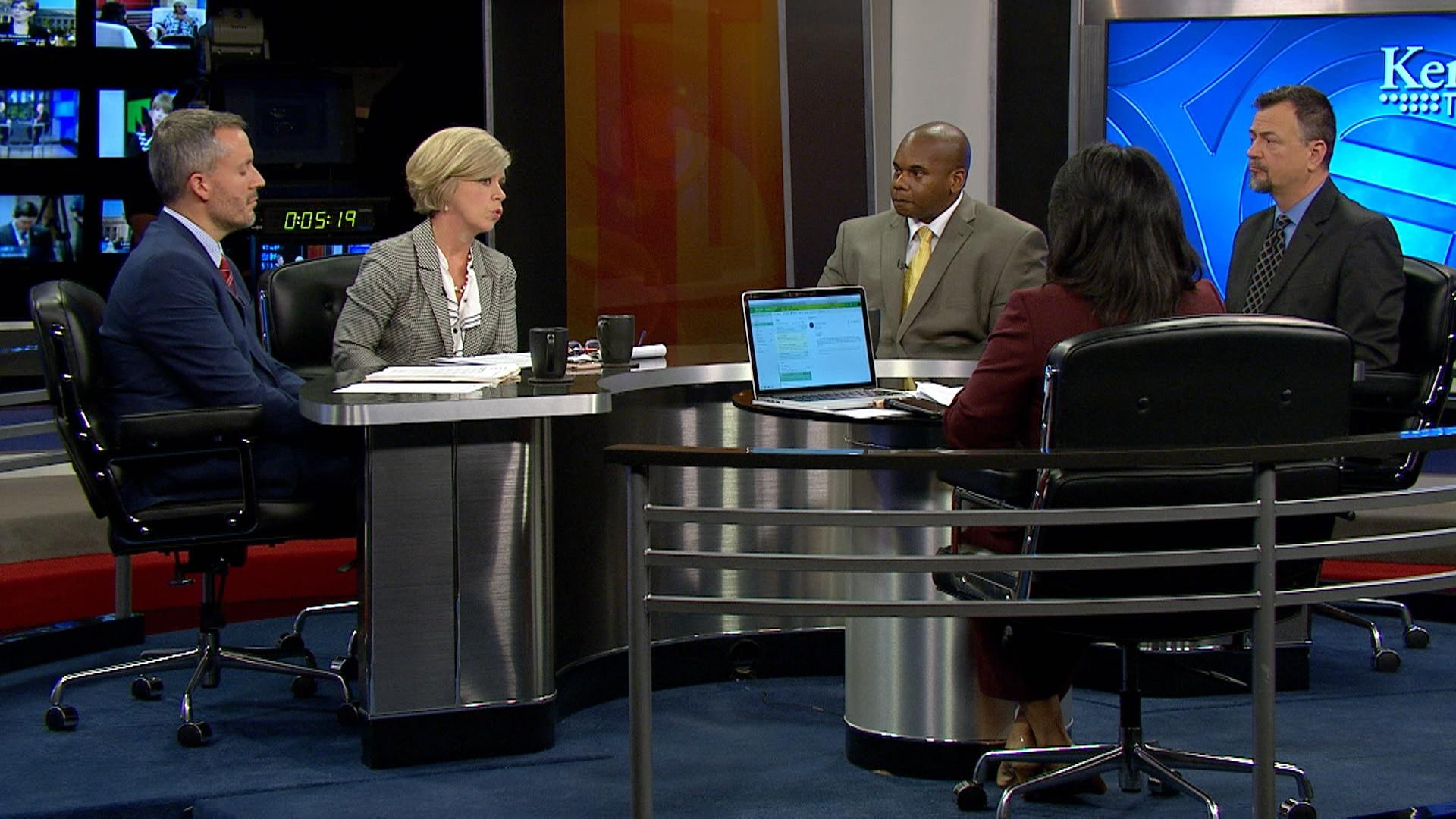