The Prospect of Legal Sports Betting in Kentucky

It’s not unusual to stop at your local convenience store to fill up on gas, grab a snack, and perhaps buy a lottery ticket.

But what if while you’re there, you could also place a bet on this weekend’s marquee college football game, or which Major League Baseball team will win the World Series?

A recent U.S. Supreme Court decision paves the way for Kentucky and other states to allow legal betting on professional and collegiate athletic events. The prospect has proponents seeing a financial boost for the commonwealth, and opponents fearing a series of moral and ethical dilemmas.

How Did We Get Here?
Betting on athletic events like football and basketball games has been illegal in most states for decades. Bookmaking already had an unseemly reputation in the United States even before eight Chicago White Sox baseball players colluded to fix the 1919 World Series in exchange for payments from a gambling syndicate.

Historically, there’s been one key exception to the prohibition against sports betting: parimutuel wagering, which essentially allows horse-racing enthusiasts to wager against one another on the outcome of a contest (in this case, a race) instead of betting against the entity staging the contest (known as the house).

Then in the late 1980s and early 1990s, a number of states moved to legalize casino gambling. Fearing that the trend might lead to a spread of sports betting, the federal government intervened. In 1992, Congress passed the Professional and Amateur Sports Protection Act, also known the Bradley Act, to prevent states from legalizing any sports betting. The four states that already allowed it in some form (Delaware, Montana, Nevada, and Oregon) were grandfathered in, and parimutuel wagering on horse racing was exempt from the prohibition.

Flash forward to 2013, when New Jersey enacted a bill to allow sports wagering at racetracks in that state and in Atlantic City casinos. Professional sports leagues as well as the NCAA looking to protect the integrity of their games sued to block the new law, and the case eventually wound up before the U.S. Supreme Court.

In May of this year, the court ruled in favor of New Jersey, saying that Congress had illegally commandeered the authority of states to regulate sports betting. In declaring the Bradley Act unconstitutional, the decision essentially opened the door for individual states to legalize wagering on sporting events.

A Hope for New Revenues
Even before the Supreme Court issued its final decision, Kentucky lawmakers had moved to set the stage for sports betting in the commonwealth – and to ensure the state got a piece of the action.

“This is an opportunity to help with the General Fund and getting funds we need for infrastructure and other needs across the state,” says Rep. John Sims. “People are already doing it, so let’s give them a safe place to make these bets.”

Sims sponsored a bill in the 2018 General Assembly session that would have directed the Kentucky Lottery Corporation to create a system for wagering on collegiate and professional games. Under the legislation, sports bets could be placed at racetracks and at retailers offering Kentucky Lottery tickets. A similar bill proposed by Sen. Julian Carroll (D-Frankfort) would have placed sports betting under the jurisdiction of the Kentucky Horse Racing Commission. Neither the House nor Senate bills made it out of committee.

Democrats Sims and Carroll are members of a bipartisan group of lawmakers discussing legislation on sports betting for the 2019 General Assembly session. Estimates on potential sports betting revenues in Kentucky vary widely, from a low of $5 million to a high of $30 million.

Republican Rep. Adam Koenig says sports betting won’t resolve the state’s budget woes, but it could provide an important source of new revenue. Koenig is not part of the bipartisan panel, but he does support allowing sports betting at brick-and-mortar facilities like racetracks as well as online wagering and bets made through cell phone apps. He says people should be able to bet on the final outcome of a particular game as well as what happens during a contest.

“If you’re watching a basketball game, who’s going to hit the next three-pointer, is the next pitch going to be a ball or strike, which team is going to kick the next field goal,” Koenig says. “That’s, frankly, where the money is.”

Koenig says he’d also like to create one state agency charged with regulating sports betting as well as all other forms of gambling in the commonwealth. Currently, a dedicated corporation runs the Kentucky Lottery, while the Kentucky Horse Racing Commission and charitable gaming operate under the auspices of the Public Protection Cabinet.

Moral and Ethical Issues
But efforts to allow sports betting in the state face the same hurdles that have stymied efforts to bring casinos to Kentucky: moral concerns and constitutional questions.

“We just think it’s not good policy,” says Martin Cothran, whose Family Foundation has opposed expanded gaming efforts for two decades. “This kind of gambling, like in many ways the lottery, derives a lot of its money from the underclass.”

Cothran says studies indicate that lower-income people tend to gamble with money that they should be allocating for food and shelter. That essentially makes gambling a regressive tax, according to Cothran. He says it’s ironic that many liberal lawmakers oppose the regressive nature of greater sales taxes, yet they seem to have no problem with the regressive aspects of expanded gambling.

Then there’s the aspect of potential corruption, especially if betting is allowed on collegiate games. Both bills proposed in the 2018 legislative session prohibited players from betting on their own games. Koenig says the state could also enact provisions to prevent Kentucky bettors from wagering on games played by state schools or games being played within the state’s borders.

But Lexington attorney Stan Cave, who also served as an official in the administration of former Gov. Ernie Fletcher, fears that may not be enough. He contends college athletes, who are prevented from benefitting financially under NCAA rules, could be vulnerable to the temptations of millions of dollars being wagered on their games.

“We’re kidding ourselves if we don’t think we’re opening the door to scandal,” Cave says. “This is where we’re going to put our amateur athletes really at risk.”

Constitutional Concerns
Sports betting proponents also face a significant legal hurdle: Kentucky’s 1891 Constitution. The state constitution prohibits gambling and games of chance, which is why voters had to approve constitutional amendments in 1988 and 1992 to allow a lottery and charitable gaming, respectively.

The Kentucky Court of Appeals affirmed the legality of parimutuel wagering on horse races in a 1931 case brought by the state against the Kentucky Jockey Club. Cave says the key factor noted in that case was that those betting on a horse race play against other bettors, not the “house.” He says that distinction is important when considering the constitutionality of sports betting in the state.

“When you have an element of chance and the house is accepting the risk, just like your bookie does when you place a sports wager, then that’s the element of chance that is violative of Section 226 of the Kentucky Constitution,” says Cave.

Changing the state constitution isn’t easy, though. A supermajority of both chambers of the state legislature must approve putting a constitutional amendment on the ballot. Amendments can only be presented to voters in even numbered years, which means November 2020 would be the next opportunity for the public to vote on a potential sports betting provision.

But Koenig says he’s not certain a constitutional amendment is even necessary. Instead, some proponents argue that sports betting could be legally enacted through state statute.

Whether lawmakers opt for statutory changes or push for a constitutional amendment, Koenig fears the issues of sports betting and expanded gambling in general will generate a protracted court fight.

“It does boggle my mind that there may actually be a chance that we would have some sort of legalized marijuana in this state before we have legalized casinos,” Koenig says. “I just can’t process that.”

Cave says he’s seen a draft of a third such bill that he claims came from the bipartisan panel of legislators working on the issue. He says it would give sports betting licenses to each of the eight horse racing tracks in the state as well as to the Kentucky Lottery Corporation, which could then grant sublicenses to each retailer that sells lottery tickets. Cave says the draft does not include any funding to combat gambling addictions that may result from increased access to betting. But the legislation does instruct the Cabinet for Health and Family Services to study the issue. Cave also says the draft indicates that proceeds from sports betting would go to Kentucky Educational Excellence Scholarships (KEES) and to the state’s General Fund.

Sims, who is a member of that informal working group, says he’s seen no draft legislation and can’t vouch for the validity of the language Cave reviewed.

Meanwhile, the professional baseball, football, and basketball leagues as well as the Professional Golf Association have hired lobbyists to work in Frankfort on the issue. Cave says that “army” of lobbyists and the money they bring to Kentucky will dominate the debate in favor of sports betting legislation that will benefit wealthy leagues and team owners. Cothran says he sees that as highly ironic.

“All of these sports organizations were on the anti-gambling side of the Supreme Court case, and they have reasons for that because they think they know what it will do to their sports,” says Cothran. “Now that they’ve calculated that [sports betting] is coming anyway, they want their cut.” 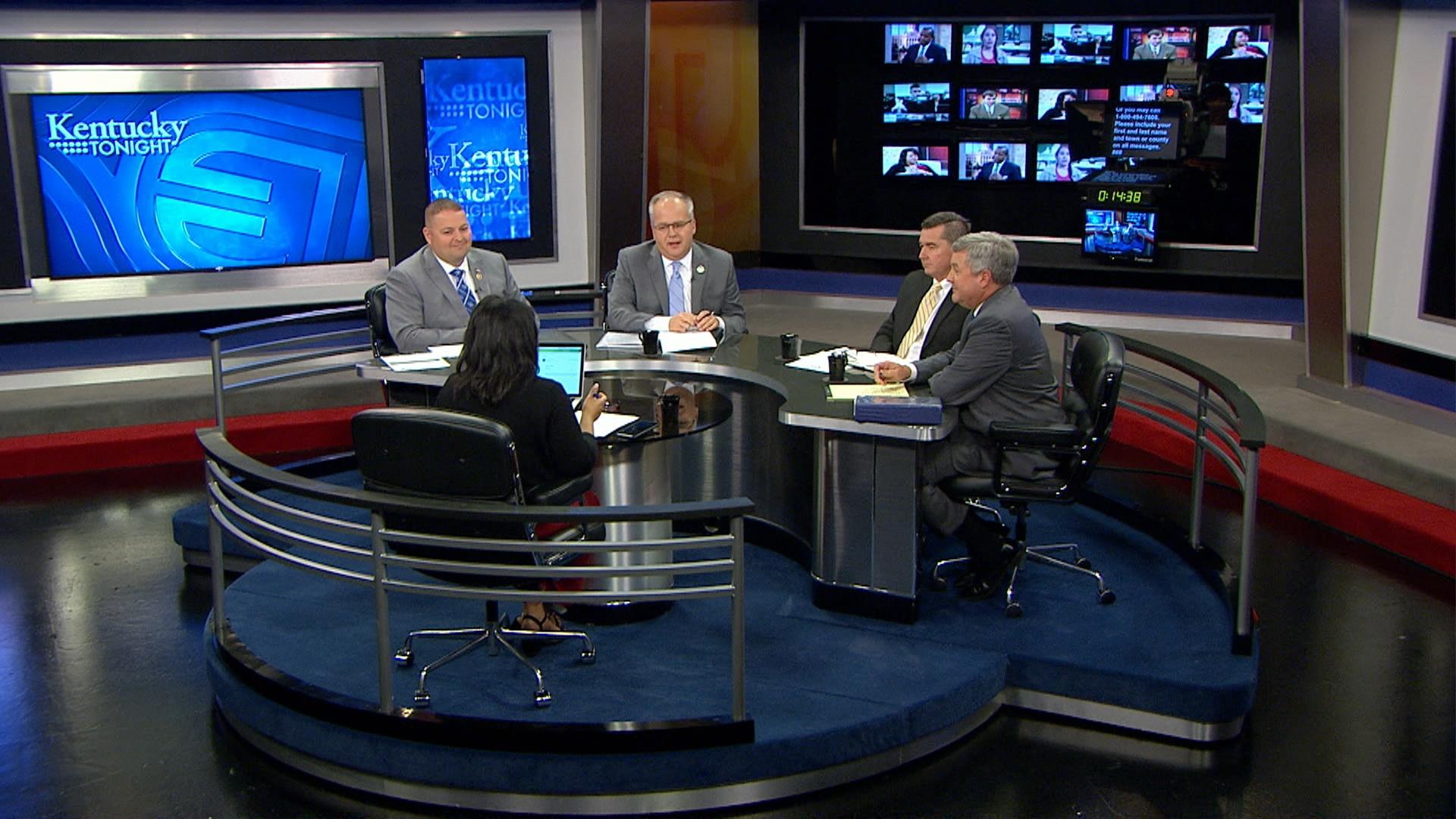