Areas of Conflict and Compromise in State Tax Reform

Sometime after August 15, Gov. Matt Bevin is expected to call state lawmakers into special session to consider an overhaul to the state’s tax codes. The governor has set a general goal of transitioning from a tax system focused on production (or income) taxes to one based on consumption (or sales) taxes, but more specific details on what his tax proposal would include have yet to emerge.

Representatives from four advocacy groups appeared on KET’s Kentucky Tonight to discuss their ideas for how to overhaul state taxes.

A Change in Philosophy
The proposed shift from a production-based tax system to a consumption-based one sets up a significant philosophical argument: Do you fund state services by taxing individuals and corporations based on what they make or what they spend. And who could be helped the most depending on which strategy the commonwealth pursues?

“The primary goal should be creating an environment where businesses can grow,” says GLI’s Sarah Davasher-Wisdom. “We need to be focused on attracting and retaining tomorrow’s employers so that we can all benefit from tax reform.”

But a tax system that promotes a better economy shouldn’t place more burdens on lower-income Kentuckians, says Sheila Schuster of the Advocacy Action Network. She recommends lawmakers charged with enacting tax changes give as much thought to the needs of working families as they do corporations.

Since Kentucky lags many states in economic growth and average personal incomes, the Pegasus Institute’s Jordan Harris says the state needs big, bold tax reforms that can generate significant improvements in the economy of the commonwealth.

“My biggest concern as we approach a special session is that we’re going to end up with a plan that only tinkers around the edges,” says Harris. “To just decrease the income tax by 1 percentage point and to phase out the inventory tax or phase out the estate tax really isn’t enough.”

Some state legislators, especially newly elected House Republicans, are reluctant to raise taxes to pay down massive public pension liabilities as well as help fund ongoing education, health care, infrastructure, public safety, and other needs. But Sarah Zeller of the Kentucky Center for Economic Policy says generating more funds for state coffers should be a key goal of tax reform.

“Lawmakers need to think about how we can raise revenue in a fair, adequate, and sustainable way so that our commonwealth can invest today and tomorrow in the things that really make our commonwealth great,” says Zeller.

More Consumption Taxes
Both Davasher-Wisdom and Harris endorse the idea of moving towards a greater reliance on sales taxes, which they say will make the state more competitive and allow businesses to invest more in growth and jobs.

“Taxation is inherently detrimental to economic activity,” says Harris. “So we have to govern our taxes in a way that best drives our economy, and from our viewpoint the way to do that is by shifting that tax base on to our consumption base.”

They point to states like Tennessee, which they say is booming thanks to a strategy that replaced personal income taxes with higher and more broadly applied sales taxes. But Zeller says other states that have shifted to more consumption taxes have had less stellar results.

“Cutting taxes does not ensure economic growth,” says Zeller. “We see that in a number of different places, including North Carolina. Yes, [they’ve] had some economic growth but they are not at the same level as their surrounding states.”

Harris counters that a new tax policy has given North Carolina lower employment rates and higher state revenues. He argues that sales taxes could raise enough revenues in Kentucky to more than compensate for what the state might lose by cutting its income tax.

But Davasher-Wisdom says she doubts the state can completely eliminate income taxes and still pay down the billions in unfunded liabilities in the public employee and teacher pension systems.

Zeller and Schuster contend that sales taxes are regressive because the poor wind up paying a greater percentage of their income to taxes under a consumption-based system.

Beyond the philosophical debate of production versus sales taxes, the question becomes what goods and services would face a broadened sales tax. It’s estimated that the state loses nearly $700 million a year by not taxing food. But a grocery tax would hit lower-income families the hardest, says Schuster. Davasher-Wisdom suggests providing poor individuals with a tax credit for purchasing food.

Prescription drugs and medicines are also mentioned as items to which a sales tax could be applied. And the panelists agree that the gasoline tax should be reviewed: Harris advocates for applying a 3 percent sales tax to gas purchases, and Zeller says lawmakers should raise the floor below which the gasoline tax could not drop.

A consumption-based tax strategy could also levy sales taxes on services. Schuster says she favors taxing things that wealthy individuals use such as charter planes, limo services, and country club privileges, but she would exempt child care. Zeller says she would not tax medical services, and Davasher-Wisdom advocates for exempting services that one business provides to another business. She adds that none of Kentucky’s competitor states levy sales taxes on professional services such as those provided by lawyers or accountants.

Cigarette Tax
Given the commonwealth’s tobacco farming heritage, the idea of increasing the cigarette tax has long been resisted. But Schuster says the current 60-cent per pack excise tax on cigarettes should be raised by a least a dollar.

“That would bring in $233 million a year, save lives, and cut down on [health care] costs,” Schuster says. “There is no other tax that carries those kind of benefits.”

Schuster acknowledges that the tax revenues would go down over time as the higher price dissuades people from smoking, but she argues that the decrease would be gradual, probably only 1 to 3 percent a year.

Harris says he’s open to higher tobacco taxes as a form of consumption tax, but he says it wouldn’t be a significant revenue source for the long term. Davasher-Wisdom says GLI supports raising the cigarette tax because they believe it won’t hurt the overall economy of the state and it will help foster smoke-free workplaces.

Inventory Tax
During his State of the Commonwealth earlier this year, Gov. Bevin said he also wants to eliminate the state’s inheritance tax and inventory tax. Both the Kentucky Chamber of Commerce and GLI want to see an end to taxes on business inventory, such as bourbon aging in warehouses and other types of products.

“The inventory tax is something that penalizes production on our signature industries,” says Davasher-Wisdom. “It’s a high rate on a very narrow base and that’s the very definition of a bad tax.”

At the same time, though, Davasher-Wisdom admits that it’s a complicated issue. While the state does receive some inventory tax revenues, she says most of those proceeds stay within local communities to help fund fire departments, ambulance districts, and other special purpose government services. She says the issue needs further discussion to determine how to lessen the burden on businesses while not those hurting vital public services.

Local Option Taxes
Chamber groups have also supported recent efforts to enact local-option sales tax (LOST) legislation that would allow residents of a specific community or jurisdiction to vote to enact up to a penny of additional sales taxes to fund the construction of a specific public project. When the project is completed and paid for, the additional tax would end. The local-option taxing idea would require Kentuckians to approve an amendment to the state constitution.

Zeller says she’s concerned that poorer individuals would feel more of the burden from a higher sales tax. Plus she says many areas of the state, especially eastern Kentucky, don’t have enough retail base to generate significant funding from a small and temporary sales-tax hike.

Itemized Deductions and Tax Credits
Zeller contends Kentucky is too generous in the amount of deductions it allows to personal income taxes. She says limiting itemized deductions to $17,500 each year would generate an additional $200 million in revenues for the state. She also argues that those deductions tend to be unfair since more than two-thirds of the deductions taken by taxpayers are used by the wealthiest Kentuckians.

Harris says he favors those deductions because it allows taxpayers to keep more of their income and spend or invest it how they want.

State lawmakers have also considered creating a scholarship tax credit, which would allow people to reduce their taxable income by donating to a non-profit organization that provides scholarships to students who want to attend a private K-12 school. Zeller criticizes that idea, saying it’s a giveaway to wealthy individuals who can afford to make the donation and secure the tax credit.

Davasher-Wisdom says GLI has explored the idea of a tax credit for individuals who invest in start-up companies in the state. She says those who provide capital to new businesses in a distressed neighborhood or community could receive a 50 percent tax credit, while investors in start-ups in other areas would receive a 40 percent credit. Davasher-Wisdom says that would provide a significant boost for entrepreneurs who need funding to launch a new enterprise. 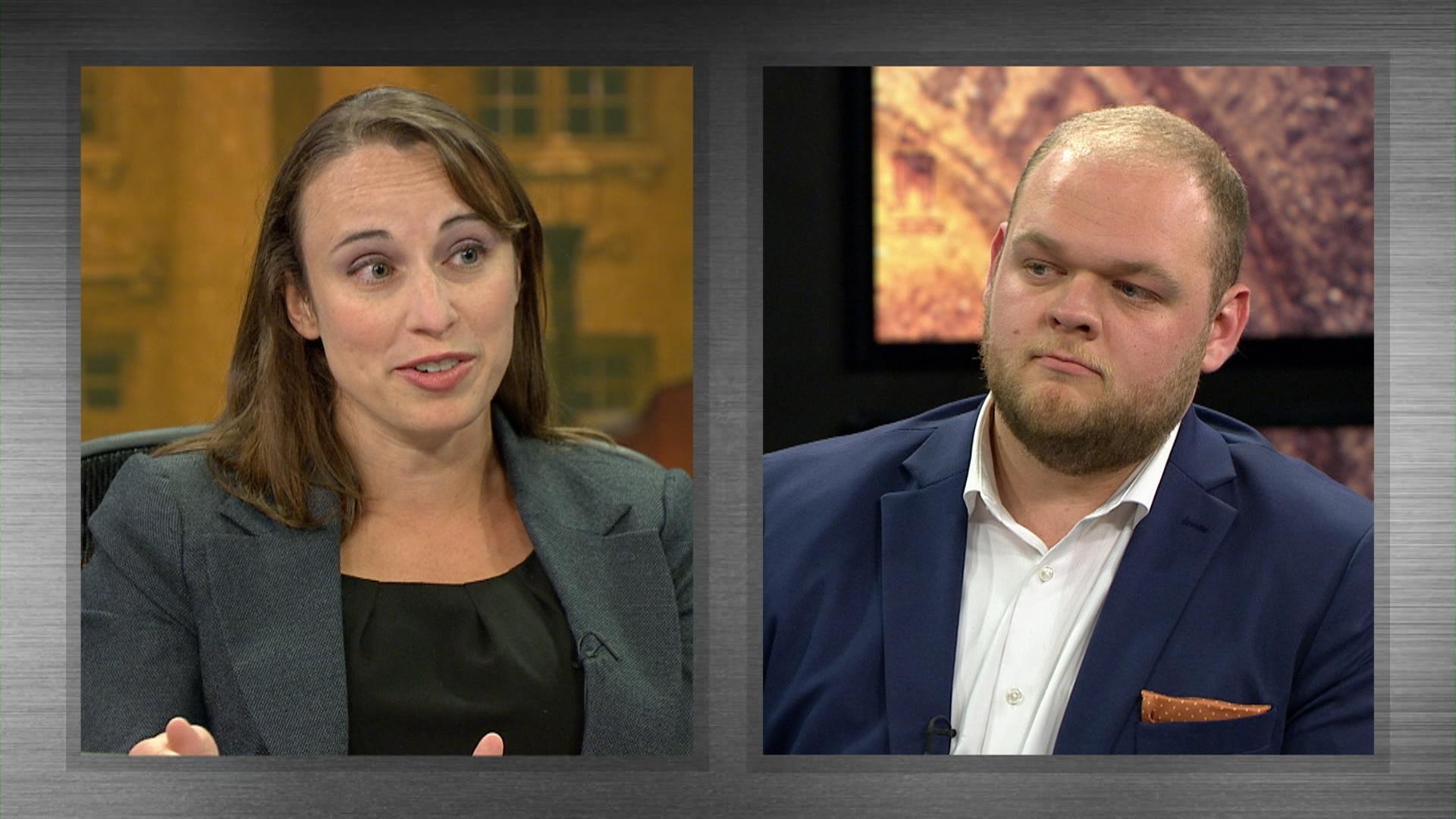