After the 2016 elections, when Republicans gained control of both legislative chambers and the executive branch of government in Kentucky and in Washington, DC, it was a good bet that major tax cuts would soon follow. President Donald Trump made tax reform one of three top priorities for his administration, and Kentucky Gov. Matt Bevin promised a special legislative session in 2017 to simultaneously tackle tax and pension reform.

But then political realities set in.

U.S. Senate Republicans failed in multiple attempts to repeal and replace the Affordable Care Act, which called into question their ability to garner enough votes from party moderates and hard-core fiscal conservatives to pass a tax reform plan.

And in Frankfort, the gravity of the public pension crisis has pushed the idea of tax reform to the back burner – for now.

But there is no shortage of tax reform ideas circulating among state and federal GOP leaders and other politicians.

KET’s Kentucky Tonight explored ideas for overhauling tax codes in the commonwealth as well as a Republican plan released late last month to cut taxes at the national level. The guests were economics professors John Garen of the University of Kentucky and Chris Phillips of Somerset Community College; Jordan Harris, co-executive director of the Pegasus Institute; and Pam Thomas, senior fellow at the Kentucky Center for Economic Policy.

The Federal Tax Proposal
The Republican framework for federal tax reform would reduce the current seven individual income tax rates down to three: 12 percent, 25 percent, and 35 percent. (Congress could opt to add a fourth rate for higher income individuals.) The plan keeps deductions for homeowners and charitable giving but eliminates most other itemized deductions. Instead, it doubles the amount of standard deductions taxpayers can take. The framework also calls for an increase to the child tax credit and it eliminates the estate tax.

On the business side, the GOP plan cuts the corporate tax rate from 35 percent to 20 percent. It also cuts the rates on pass-through businesses, which allows partners and shareholders to declare their business’s income on their individual tax returns.

He says he could accept a plan that simplifies the codes, reduces loopholes, and lower taxes on the middle class. But he fears the Trump plan might dramatically cut taxes for the wealthiest Americans.

The Kentucky Center for Economic Policy’s Pam Thomas says preliminary reviews of the GOP plan show that the top 1 percent will get 80 percent of the tax benefits, while many middle and upper middle-class individuals will pay more. She also fears many families will be hurt in the trade-off between eliminating personal exemptions in exchange for a higher standard deduction.

University of Kentucky economist John Garen says the current tax system discourages economic activity and is riddled with too many exemptions. The solution, he says, is to lower tax rates and close loopholes. Garen contends long-term economic security comes from enabling people to earn more income and pull themselves up rather than re-allocating wealth.

“This is not about class warfare,” says Garen. “This is about growing the economy and giving opportunity to everybody, including those folks at the bottom.”

A growth-focused tax plan is critical for Jordan Harris of the Pegasus Institute, a Louisville-based think tank that advocates for free market principles, individual liberties, and limited government. He says the GOP plan will foster a much needed change in the domestic economy by creating more opportunities for workers and making the United States more competitive with the rest of the world.

“I think the American people and the people of Kentucky know that the Obama economy did not work for them,” Harris says. “They are ready for something different and for an economy that returns to 3 percent growth.”

But Phillips doubts the Trump tax plan or any tax reform proposal can create that kind of sustained economic growth. He says the severity of the financial crash and the recession that followed created a new normal for the American economy. So a nation with steep debts and deficits as well as huge entitlement obligations may be unable to support long-term 3, 4, or 5 percent growth, he says.

What’s Missing from the GOP Framework
Phillips says he wishes Republicans would collaborate with Democrats on a tax package. He says that would boost the chances that reform legislation might actually pass Congress. He says he’d also like to see a plan that creates new sources of revenue for the federal government.

For example, Phillips points to a tax reform plan developed late in the administration of President George W. Bush that advocated for implementing a modest national consumption (or sales) tax as well as a value added tax. VATs are popular in Europe and tax a product during production and at the final sale.

Garen says he would eliminate all loopholes in the corporate tax codes and he would keep the rate for pass-through businesses the same as the overall corporate tax rate. Thomas agrees with Garen on the pass-through rate. She also advocates for indexing the earned income tax credit to inflation.

Harris says he would prefer the corporate tax rate to drop to 15 percent as Trump originally proposed. He also opposes a fourth individual income tax bracket. In general Harris says the GOP plan is a good start, which can set the stage for further tax cuts later in the Trump administration.

Kentucky Tax Reform
In his State of the Commonwealth Address in February, Gov. Matt Bevin called for a tax overhaul that would shift Kentucky away a dependence on income taxes to a system grounded more in consumption taxes. He also proposed an end to the inventory and inheritance taxes and for an aggressive review of tax loopholes.

But his plan to address pension reform and tax reform in the same special legislative session hit a snag with some Republicans, especially House freshmen who feared overhauling the tax system – and maybe raising taxes on some people – right before their first re-election campaigns.

Thomas opposes a greater reliance on consumption taxes. She contends taxing a wider range of goods and services unfairly burdens the poor who spend a greater percentage of their income on basic necessities. She’s also concerned than an eventual end to the state income tax would hurt vital public services.

“The income tax is 42 percent of our current [general fund revenue] base, so that’s a lot of money that you have to make up,” says Thomas. “You’ve got to have enough money to provide the things that we want for vibrant communities and for schools and for corrections and for health care, and if you talk about cutting taxes in this way, then there are no resources for that.”

“My fear would be on a plan such as this [is that it’s] a form of a Trojan horse where you put in place, then there’s no revenue, and they you say we’ve got to cut everything,” Phillips says. “When you reduce the size and scope of government, somebody’s going to be hurt.”

Fiscal conservatives argue that doesn’t have to be the case. The Pegasus Institute has proposed setting all individual and corporate tax rates to 3 percent, and applying the sales tax to more goods and services. Harris says that would make Kentucky one of the most economically competitive states in the nation.

“To be honest, making up the revenue is not a major concern to me,” Harris says. “There are many, many opportunities to lower our rates and broaden our bases that will make up that revenue and be able to transition our system.”

He also recommends the use of revenue triggers to smooth the transition from income to consumption taxes and protect funding for important state functions like education and public safety. That means future tax reductions would not be triggered until certain state revenue goals are met.

Garen supports trading income taxes for broader consumption taxes because he contends it’s unfair to tax people on the income they earn and tax them again on the purchases they make.

It’s too narrow, Garen says, because it doesn’t tax enough goods and services. For example, health care, food, and prescription drugs as well as legal and accounting services are currently not taxed in Kentucky. But he says it’s too broad in other ways, like how business-to-business services are taxed.

Garen says there are ways to address the regressive nature of sales taxes. Certain items that working families depend on could be exempt from sales taxes. Or a better approach, according to Garen, is to simply exempt lower-income individuals from paying sales taxes.

The state could also generate revenues from other sources. Sen. Dan Seum (R-Fairdale) wants to legalize and tax recreational marijuana, while several Democratic and Republican lawmakers want to revisit the idea of a constitutional amendment to allow casino gambling.

Thomas says expanded gaming is not as lucrative an option today as when it was first proposed because opportunities to play the lottery and bet on horse races have expanded, and because neighboring states have built more casinos along Kentucky’s borders in the interim.

Thomas and Harris agree that it will hard for lawmakers to address taxes and revenues, no matter what approaches they eventually decide to take. Harris says many of the options represent dangerous “political third rails,” while Thomas describes the reform process as a “heavy lift” that will not result in “manna from heaven.” 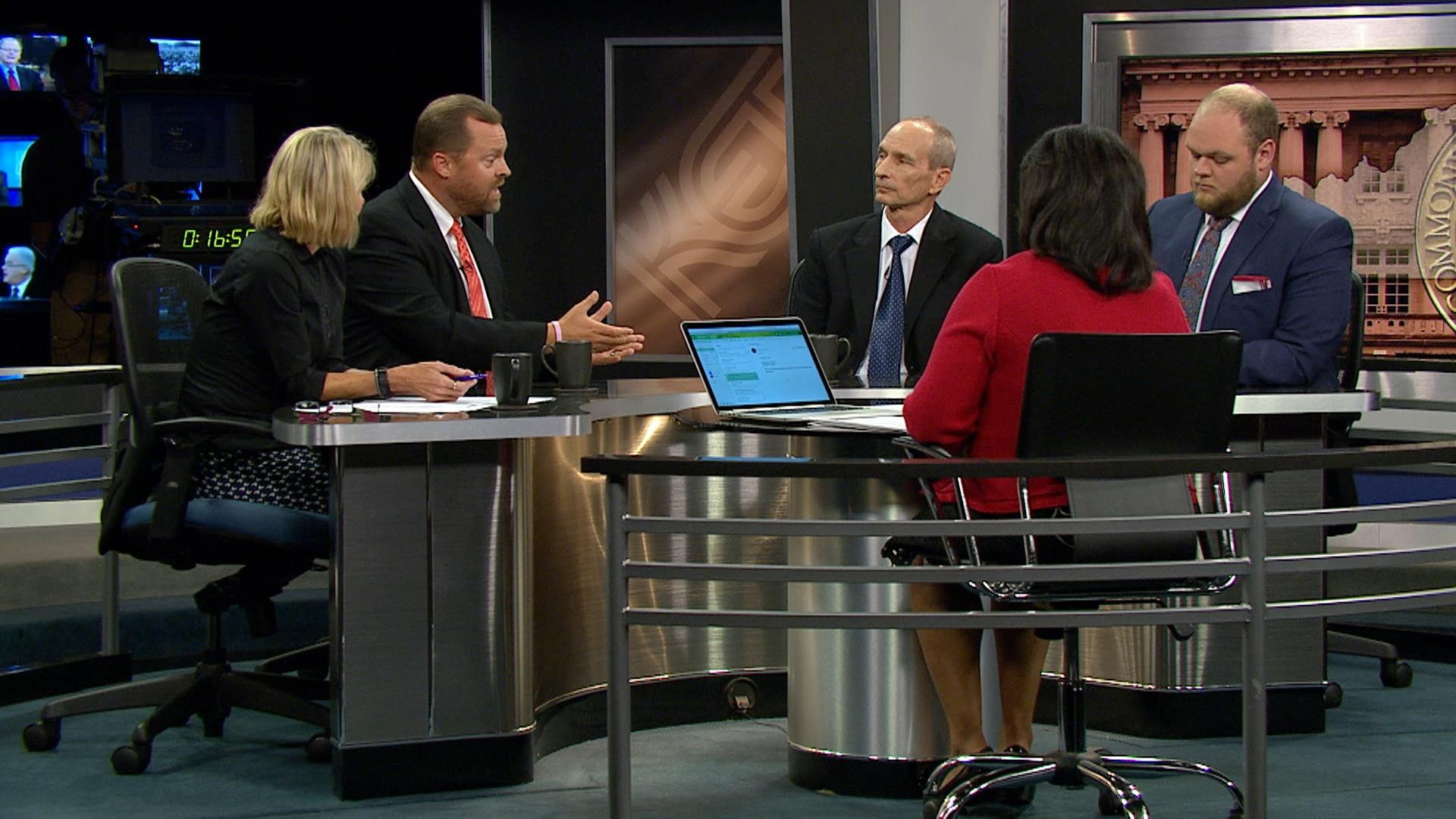