Most everybody agrees the state needs more money.

There have been a dozen studies in the past 30 years to determine how Kentucky could generate more revenues to fund health and social services, education, and roads by reforming its antiquated tax codes. The most recent effort was a blue ribbon commission formed by Gov. Steve Beshear in 2012 that recommended 54 changes to state tax policies.

Yet despite this wealth of research, lawmakers still haven’t fixed Kentucky’s tax system. Now some are hoping a new governor will have the “political courage” to finally make comprehensive reform a reality.

Two members of Beshear’s tax reform commission appeared on KET’s Kentucky Tonight to discuss the state’s revenues and taxes. Bill Farmer is a CPA in Lexington, and Sheila Schuster is executive director of the Advocacy Action Network. They were joined by Anna Baumann of the Kentucky Center for Economic Policy and Tom Dupree, a board member of the Bluegrass Institute for Public Policy Solutions.

A Fear of the Hard Votes
Given all the studies and the clear need to both update the tax codes and generate more revenue for the state, why have reform efforts languished?

“It is a scary, scary topic for lawmakers,” says Sheila Schuster, who is a clinical psychologist and mental health advocate. “Legislators, unfortunately, are very good at dodging things that cause them to make a hard vote.”

As a former state representative, Bill Farmer agrees with that assessment. He says part of the problem is a piecemeal approach that forces legislators to cast multiple votes on specific tax issues, any one of which could come back to haunt them in the next election cycle. He advocates for one vote on a major reform package, but acknowledges even that would be difficult for any politician, especially the next governor.

“Whichever gentleman gets elected governor is committing political suicide,” says Farmer. “If he does his job and does it correctly, he’s going to raise $1.5 billion a year in tax revenue.”

Another problem is how tax loopholes have become economic benefits that politicians dole out to wealthy supporters, corporations, or other special interests. Financial advisor Tom Dupree says that makes it difficult for average citizens to advance the cause of tax reform.

As bad as the current system is, Anna Baumann says income taxes still generate about 41 percent of state General Fund revenues. She says income tax proceeds helped generate a modest budget surplus for the state at the end of last fiscal year.

“So anything that we talk about tonight should be about protecting and strengthening the income tax,” Baumann argues.

Taxes and Economic Development
Baumann advocates for a system that closes loopholes that only benefit the wealthy and corporation, and that reduces the tax burden on the poor. She says lower- and middle-class Kentuckians pay up to 11 percent of their annual income in taxes, whereas the top 1 percent of earners only pay about 6 percent in taxes. Baumann says Kentucky simply can’t fund its obligations by reducing taxes.

“There is a mythology out there that lower taxes stimulates the economy, but the experience of other states shows that that’s not true,” Bauman says. “Whether at the federal level or the state level, tax cuts don’t actually stimulate the economy enough money to pay for themselves.”

Baumann and Schuster say a more effective strategy is to increase spending for education and health care so that companies looking to locate in Kentucky will have access to a better trained and more productive workforce. Schuster adds that quality of life issues outpace tax rates when businesses consider moving to a new area.

But Tom Dupree doesn’t want to completely dismiss the possibility of cutting some taxes because he thinks lower taxes can generate prosperity in specific cases. He favors creating temporary tax-free zones in the most economically depressed areas of the state as a way to promote business development in those regions.

Expanding the Sales Tax
Among the ideas generated by Gov. Beshear’s tax reform panel was a plan to apply the sales tax to services such as vehicle and appliance repairs, and to personal services ranging from dry cleaning to barbers and beauty salons.

“There’s a big school of thought that says it’s actually more fair and equitable to apply [taxes] at the level of consumption,” says Dupree. “It’s an easier thing to track and harder to dodge and get out of with sleight of hand.”

During his time in the General Assembly, Bill Farmer proposed legislation to abolish the state income tax in favor of a sales tax on a broader range of goods and services. At that time (in 2008) Farmer says Kentucky was missing out on $10.5 billion in sales tax revenues because legislators weren’t taxing things they had the authority to tax. He says that was more money than the state was collecting in income taxes.

Anna Baumann says she is opposed a system that relies more on sales taxes because, as a regressive tax, that would place a disproportionate burden on the poor. She adds that states that rely on sales tax revenues don’t perform as well over the long term, and usually have to increase the sales tax rate to keep up with escalating budget costs.

Robbing Peter to Pay Paul
By not addressing tax reform sooner, Kentucky has seen its financial position worsen, especially during the recession years. But revenues are only half of the commonwealth’s budget equation.

Bill Farmer says about 90 percent of the state spending is pre-obligated to things like pension payments, Medicaid coverage, and prisons. That leaves only 10 percent of the budget on which lawmakers can actually negotiate. He argues that political leaders have increased Kentucky’s financial woes by ignoring budget problems when they occurred and by engaging in unwise money management practices.

“The first year I was there in 2003, we short-funded the teachers’ pension by… $55-60 million and the response was don’t worry about it, we’ll make it up in investment income,” explains Farmer. “What was truly happening is we were robbing from that fund.”

Now the teacher retirement system has an estimated unfunded liability of $14 billion, and the other state pension plans are also on shaky footing.

Anna Baumann points to a more recent example of creative bookkeeping in the last legislative session where lawmakers transferred $40 million in Kentucky Lottery proceeds to the state’s General Fund. That money is supposed to be allocated to financial aid for college students.

Sheila Schuster says the state has no choice but to raise revenues to pay for its obligations. But she warns that raiding some funds to cover shortfalls in other budget lines isn’t sustainable.

“It’s not a one-time deficit. That’s compounded year after year after year,” Schuster says. “So you never get caught up until you have a boatload of money to put into the system.” 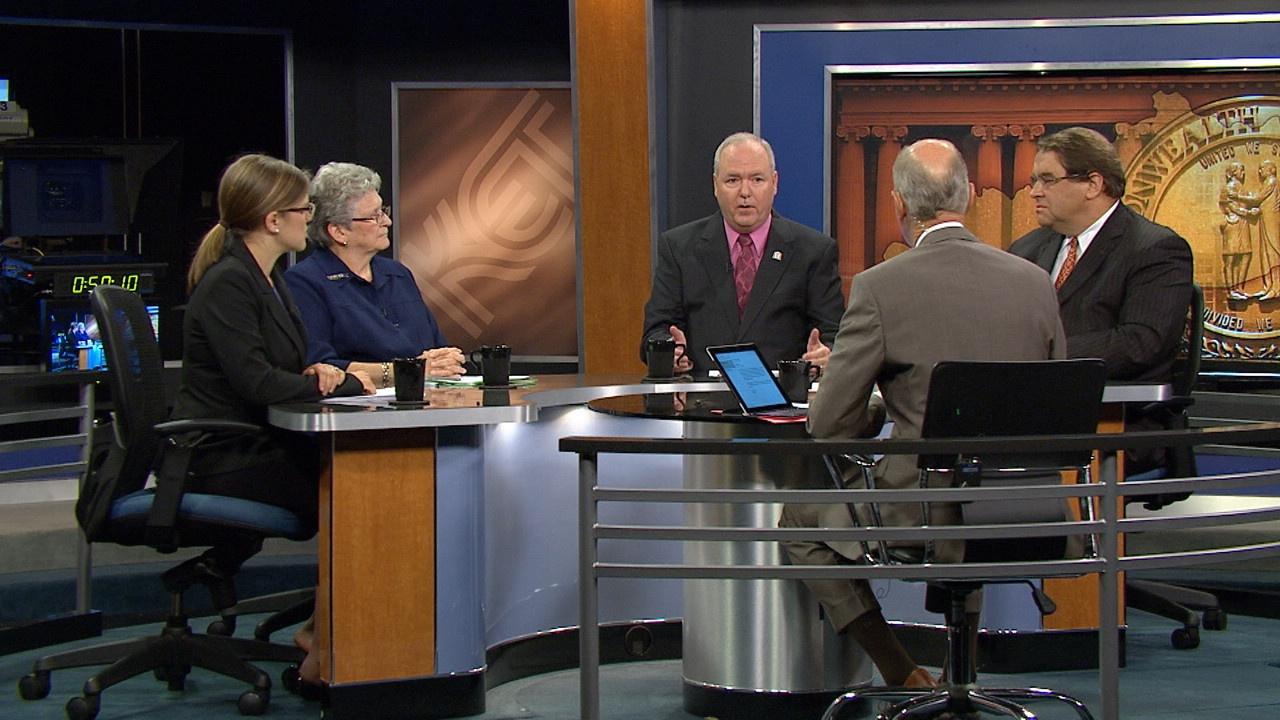