New details are emerging about the revised pension reform legislation that could be introduced in the General Assembly as early as next week.

“The bill is going to be watered-down from what was proposed last fall,” Thayer says. “I would’ve preferred that route last fall, but we took the public sector input and it has gone into every decision that we have made about the bill that is forthcoming.”

The Bevin Administration’s plan called for placing most newly hired state employees and teachers as well as current workers who opt to stay on the job after 27 years of service into a new 401(k)-type defined-contribution plan. All current employees would also be required to contribute 3 percent of their pay to fund the health care benefits of retirees.

But those provisions and other aspects of the original proposal met stiff opposition from Democrats and some Republican lawmakers as well as current and retired public workers.

Under the new plan that’s still being drafted, according to Thayer, current employees who work past their retirement dates will continue to pay into their existing defined-benefit pension plan rather being shifted over to a 401(a) retirement plan. However futures hires will probably still go into a new defined-contribution plan that involves less risk for the state, says Thayer.

The mandatory contribution to retiree health care will remain, but Thayer says it will likely be a smaller amount.

“I think it’s fair to ask public employees to pay a little more for their health care because those in the private sector have been dealing with double-digit increases in their health care now for several years,” Thayer says. “It’s not going to be 3 percent, but it probably won’t be zero.”

Thayer says the new bill may also change how the retiree benefit factor is calculated, how sick days can be used to enhance retirement benefits, and other things that he says fall outside the inviolable contract between public employees and their employers. He says the bill will also maintain level-dollar funding for the state’s contribution to the various retirement plans. (The current payments are based on a percentage of payroll, which can fluctuate from year to year.)

Limiting the Fear of Change
Thayer and Rep. Jonathan Shell say the new legislation hasn’t been introduced yet because they continue to tweak the measure as they get financial scoring from actuaries on the various proposed changes. Thayer says he also wants a bill that House and Senate Republicans agree on so they can avoid having to take the measure to conference committee to work out any differences the two chambers might have.

As those talks continue, Democrats, who are in the minority in the legislature, remain frustrated that they aren’t more involved in the process of drafting the bill.

Republican leaders hoped to tackle pension reform in the early days of the 2018 General Assembly. But legislators are now into the fourth week of the session and they’ve yet to see a final proposal. As the clock continues to tick down on the 60-day session, Webb and Rep. Wilson Stone say they fear Republican’s won’t leave enough time for lawmakers to debate the proposal and get input from their constituents.

“What we’ve done from the beginning of this pension reform discussion is frighten a lot of people,” Stone says. “We’ve frightened some of those people into retiring when they shouldn’t have.”

Shell says Republicans have remained largely mum on the details of their negotiations precisely so people aren’t needlessly upset by ideas that don’t make it into the final bill. He says it’s important to gather the facts and data to support the sustainability of the final proposal they present.

Thayer says the public will have ample opportunity to comment on the proposed reforms and see the scoring of the bill. But given everything on lawmakers’ plates this session – pension reform, a new state budget, and a new road plan – Thayer hopes the legislature will pass a pension bill sooner rather than later.

Webb says it’s ok to let the pension debate play out as long as it takes.

Impacts on the State Budget
In his budget proposal for the next biennium, Gov. Matt Bevin wants to put $1.1 billion into the Kentucky Retirement Systems and $2.3 billion into the Kentucky Teachers’ Retirement System. Shell says that infusion of cash accompanied by stronger investment returns will improve the financial health of the pensions plans that are at least $40 billion in the hole.

Stone says everyone agrees the pension problem needs to be addressed, but he doesn’t want reform to come at the expense of promises made to workers. He says Kentucky doesn’t pay its public-sector employees and teachers as well as other states, so good pension benefits help the commonwealth compete with those states to attract government workers.

Thayer says the governor and legislative Republicans are committed to fully funding the pension systems. But he warns that will force tough decisions elsewhere in the budget. Stone says that’s fueled serious concerns about some of those proposed cuts.

“There’s good things in the budget for social workers and a lot of issues,” Stone says, “but public education really took a beating.”

Shell says the governor also proposed cutting $54 million in funding for health insurance for active teachers. Again local districts would be expected to make up that difference.

Stone says he fears rural school districts will take brunt of these cuts, which could lead to inequities in school funding. Thayer says schools can tap into their reserves to compensate for the cuts. He says the state’s 174 school districts have nearly $1 billion in reserve funds.

“I think it’s appropriate to ask [them] to tap into their rainy day fund as we try to rebuild ours,” says Thayer.

The governor’s plan also eliminates state funding for 70 programs. Shell says House budget committee members are reviewing Bevin’s plan line by line and will keep programs that have merit and cut those that don’t. He says they will also look for efficient ways to consolidate similar state programs.

“Cut down on the administrative costs, save the budget money, and do it in a more effective way,” Shell says. “Smaller, smarter government is always the best way to go.”

Bevin has also said that all “sacred cows” in the budget should be reviewed to determine if they warrant continued funding. Webb says she agrees with that idea, but she says the governor’s list of cuts will need to be tweaked by lawmakers.

“The budget is a reflection of your priorities, Webb says. “Now it’s up to us to show, as the branch [of government] closest to the people, what our priorities are. So I hope that we can bring back some equity for our school districts and avoid tuition increases in our public universities.”

Other Issues Before Lawmakers
Despite calls from Democrats to address pension and tax reform at the same time, Thayer says lawmakers simply may not have the bandwidth to tackle those issues and craft a state budget in this session. He says tax reform must be pro-business and that it will take time to transition Kentucky from a reliance on income taxes to a system based on sales and consumption taxes.

“There is a consensus that we need more well-paying jobs to put more people in the workforce, who will then be paying more taxes and that will contribute to the General Fund,” Thayer says. “The best way to do that is to change our tax code to make it more modern so we have a tax code that grows with our economy.”

One bill that is rapidly approaching final passage would put a proposed amendment to the state constitution on the November ballot. Senate Bill 3, also known as Marsy’s Law, would create a crime victims’ bill of rights. The measure has passed the Senate and is moving through the House of Representatives.

Thayer says lawmakers have made significant criminal justice reforms in recent years, so now it’s time to address the rights and needs of crime victims. Webb says many such protections already exist, although they may not be consistently available in all parts of the state.

“Marsy’s Law is going to make everybody feel better but certainly I don’t know if it’s going to actually have any more protections for a victim,” Webb says.

Thayer and Shell admit the pace of the 2018 session is slower than the 2017 session, when the new Republican majorities passed seven key bills and sent them to the governor for his signature in the first five days. Shell says Republicans are asking their members to be choosy about what bills they file, and committee chairs to be more selective in what bills they advance.

Webb and Stone say the slower, more deliberative pace is better for lawmakers and the public because it gives them more time to debate the issues. Plus they say it can result in better legislation being passed. 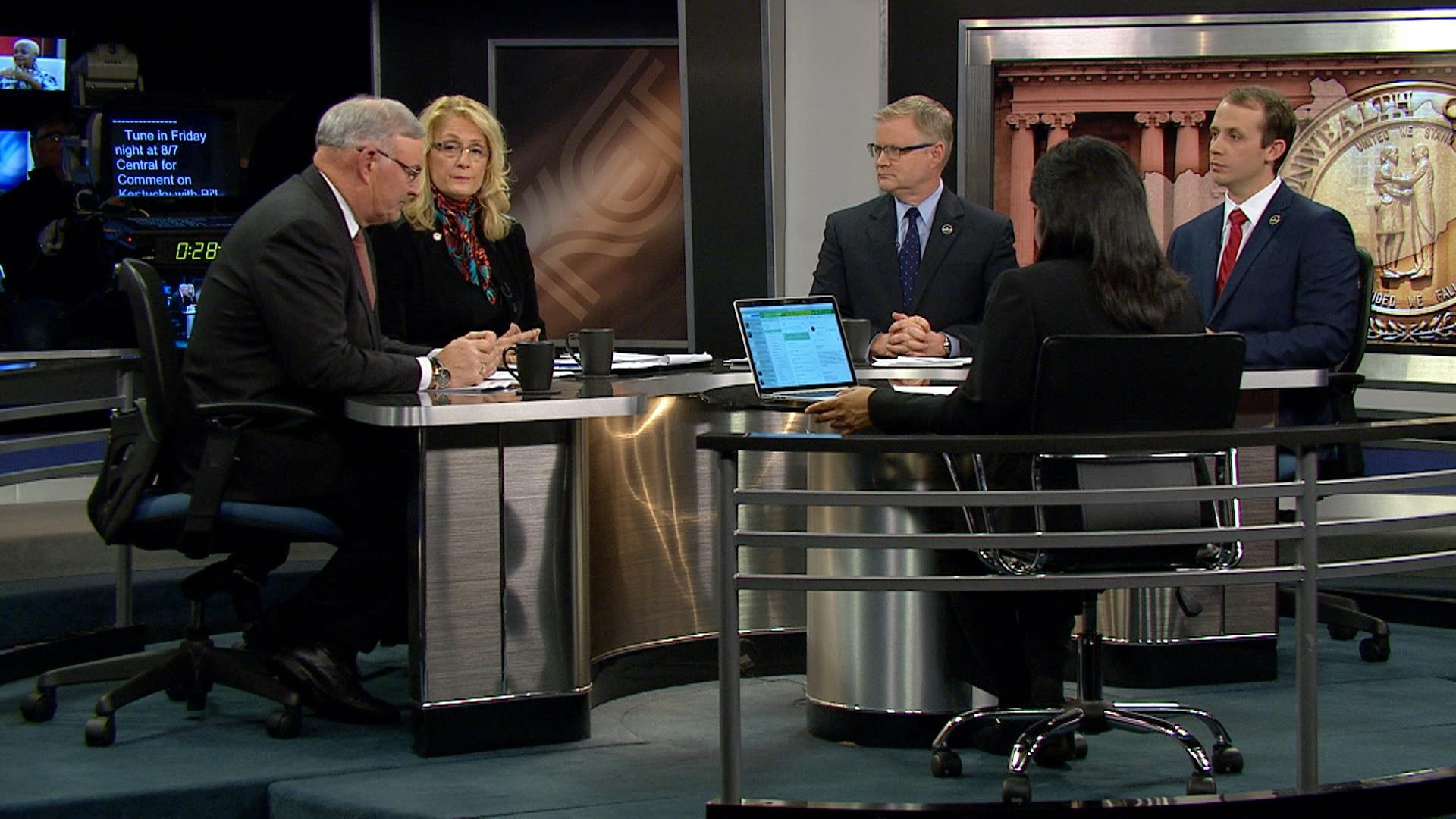